You are at:Inicio»Market Preview»USD Up on Good Retail Sales, GBP Up on Employment Data; Canada CPI 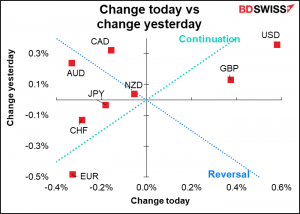 Better-than-expected US retail sales figures encouraged an optimistic view of the US economy, sending US stocks further into record territory and pushing the dollar higher.

As for the retail sales, the headline figure was up 1.7% mom vs expectations of +1.4%, while ex-autos and gasoline was u 1.4% mom, double expectations of +0.7%. The news was particularly encouraging as October was the first month after the Federal government stopped sending its extraordinary supplementary benefits to people made unemployed by the pandemic. There were fears that that decline in incomes could hit sales. Furthermore, consumer sentiment has plunged, but as I showed yesterday there’s little real-world connection between what people say and what they do.

The headline retail sales figure is 20.9% above the pre-pandemic average, which is amazing. US industrial production also beat estimates handily (+1.6% mom vs +0.9% expected, -1.3% previous) although about half of the gain was simply a recovery from Hurricane Ida. And just for good measure, the National Association of Home Builders’ (NAHB) housing market index for November rose to a 6-month high of 83 (80 expected), which raises expectations for today’s US housing starts (see below).

GBP also did well after the UK labor market data trounced expectations. Unemployment fell to 4.3% from 4.5% (expectations 4.4%) as employment grew by 247k, 57k more than expected. As a result the market increased its estimates for Bank of England tightening, which helped to support the pound. 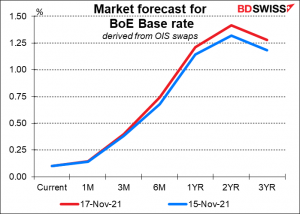 And UK bond yields rose vs almost all other major markets except Canada. 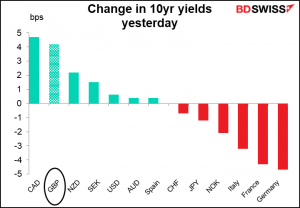 EUR continued to weaken. Note the decline in bond yields in the major European countries yesterday. I think people are getting more and more concerned about the pandemic in several European countries. While countries such as Italy and Spain, which saw a tremendous number of cases early on, now have things pretty much under control, other countries are suffering a recrudescence of cases. Ireland and the Netherlands stand out as being worse than even basket-case Britain, and Germany isn’t far behind. All of those are well above the case level in the near-failed-state USA, which is nothing short of astonishing as so many US politicians are actively sabotaging the government’s attempts to get things under control. This is a particular problem for the European Central Bank (ECB) when the inflation rates in several of the core Eurozone countries are much higher than the ECB’s 2% target. Can they wind down their emergency pandemic programs when the pandemic is taking off again? The bond market seems to be saying “no.” That just reinforces the “monetary policy divergence” theme as the Fed glides toward “lift-off” as the ECB trudges toward Japanization. 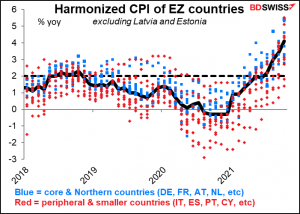 The ECB’s quandary is exacerbated by the region’s dependence on Eastern European natural gas, which surged yesterday after the German energy regulator decided to temporarily suspend the certification of the Nord Stream 2 pipeline. The Dutch futures this morning are up 22% from Monday’s closing level. UK natural gas prices also jumped 17%. Rising energy prices will add to inflationary pressures in the Eurozone. 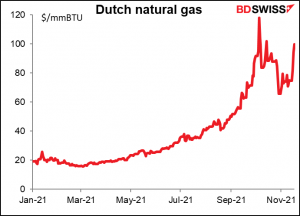 The American Petroleum Institute (API) reported a small increase in inventories of 655k barrels during the latest week. While this was below the market’s expectation for an increase of 1.2mn barrels for today’s US Department of Energy figures, it was enough to calm the market’s fears about falling inventories. 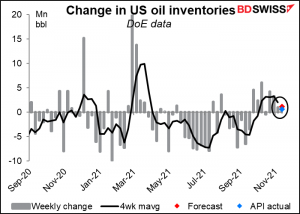 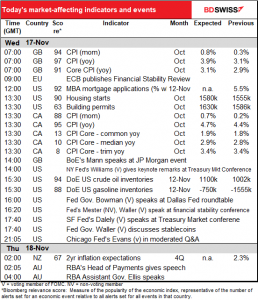 US housing starts are expected to be up 1.6% mom vs a 2.8% mom increase in building permits. The housing market remains in healthy condition in the US, as shown by the 44k increase in construction jobs during October (the month covered by today’s data). 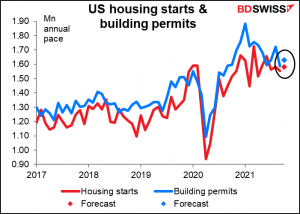 The worrisome thing for the Bank of Canada is probably the steady rise in the three core CPI measures, which suggests that this isn’t just a few items hit by the pandemic that’s causing inflation to rise. 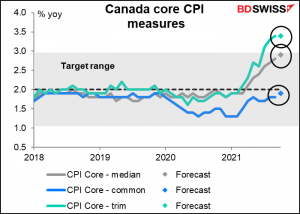 The market has been steadily raising its forecasts for Canadian inflation (ditto for most other countries too, I assume.) 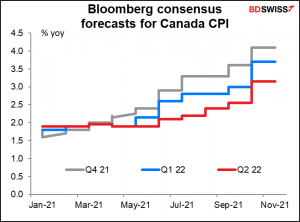 No surprise given the close correlation (77%) between Canada’s CPI and that of the US. 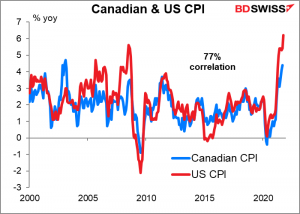 The market already expects the Bank of Canada to begin normalizing interest rates soon – it’s pricing in a 42% chance of a rate hike by the January meeting and a 100% chance of a hike by the March meeting. Can higher inflation increase the odds of a January hike? Possibly. In that case, this figure could be positive for CAD. 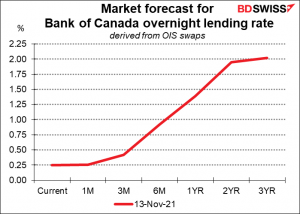 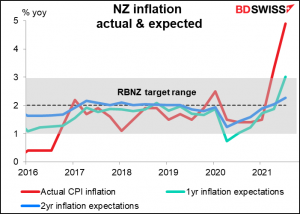 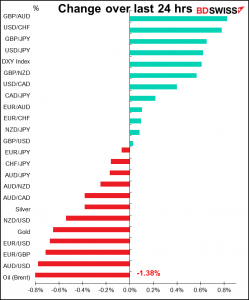