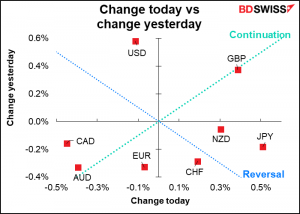 It’s easy to understand why GBP did well yesterday. UK inflation is soaring – up 4.2% yoy from 3.1% the previous month (3.9% expected). The figure was the fastest inflation in a decade and beat every estimate on Bloomberg, not to mention the Bank of England’s forecast in its November Monetary Policy Report. Core CPI also beat expectations at 3.4% yoy, up from 2.9% (3.1% expected). They’ve both now well outside the Monetary Policy Committee’s zone of tolerance. 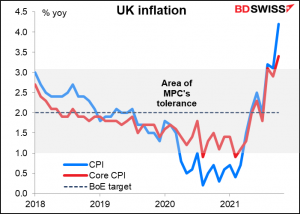 The pound’s strength following the figures – EUR/GBP fell below 0.84 for the first time since Feb. 2020, before the pandemic – suggests the market thinks that a rate hike is more likely than it was before the data came out, which I think is reasonable.

Oddly enough though, the figures didn’t boost the rates market’s expectations for tightening. On the contrary, they’re a little lower than they were on Tuesday, following the release of the better-than-expected employment data. I have no idea why the rates market is saying this, which is the opposite of what the FX market is saying. It may be that some investors are questioning the pace of tightening that’s built-in – that given the headwinds the UK economy faces, such as supply chain problems and the potential triggering of Article 16 and the ensuing disruption in UK-EU relations that that would cause. 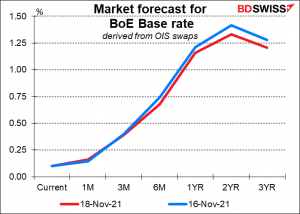 The yen’s gains are harder to explain. It had its biggest rise since August just after hitting a four-year low against the dollar on Tuesday.

Implied vol on USD/JPY options has soared, particularly at the short end, as the pair has become more volatile. 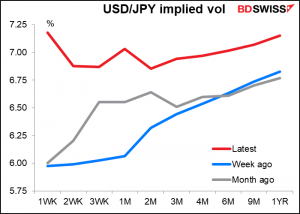 Probably what’s driving the volatility there is the volatile US bond market. Since the Japanese bond market is constrained by the Bank of Japan’s yield curve control (YCC) policy, which pledges to keep the 10-year bond yield at ±25 bps of 0.0%, the spread between the two countries is unusually volatile. Other countries’ yields may be dragged up or down in sympathy with US yields, but not Japan (or at least, not dragged very far). The result is that the spread between the US and Japan is more volatile than that between the US and other countries’ bonds. 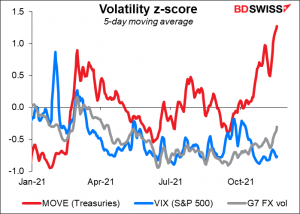 Unlike GBP, CAD failed to gain despite higher inflation figures, probably for two reasons. First, the figures were bang on expectations (the headline CPI was 143.9 vs the expected 143.8, which is really good!) Secondly, oil fell, and CAD is trading more like a commodity currency than a financial asset. 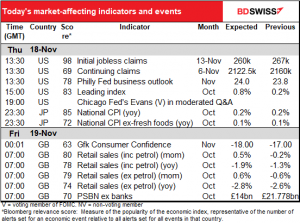 Nothing much on during the European day.

So then we wait for the fabled US jobless claims.

Attention will focus as usual on the dreaded initial jobless claims, which are expected to inch down by 7k to 260k. Last week the forecast was also for 260k, but there was only a disappointing fall of 4k last week instead of the expected -9k, so economists are just trying the same forecast over again.

The pace of decline has slowed somewhat to an average of -7k a week over the last four weeks from -10k a week in the previous four weeks. Also the range has shrunk notably—look how narrow the one-standard-deviation range has become. That may be a result of California finally getting its problems sorted out. 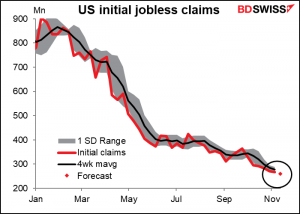 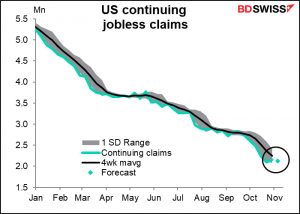 At the same time the jobless claims come out, we’ll also get the Philadelphia Fed business survey. It’s expected to be effectively unchanged. Monday’s Empire State survey was much better than expected though, rising to 30.9 from 19.8 (22.0 expected). Although the correlation between the levels of the two indices is a pretty good 75%, on a month-to-month basis it’s random: the two move in the same direction only 52% of the time, which is basically a coin toss. So saying what the Empire State index did has no information value for what the Philly Fed index might do, although it makes for a believable story. 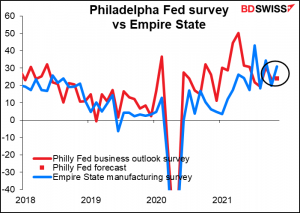 As usual, people will be looking for indications about inflation and supply bottlenecks. The Empire State prices paid index turned up, which suggests continued inflationary pressures… 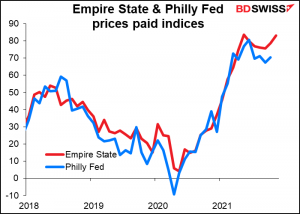 …but unfilled orders and delivery times turned down, suggesting that bottlenecks are starting to ease. Again, there’s nothing that says what happens to the Empire State index will inevitably happen to the Philly Fed index. 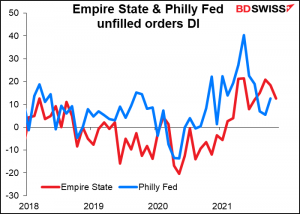 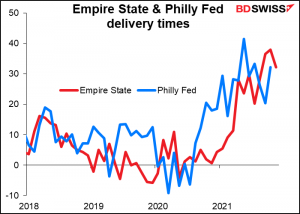 I have no idea why the US leading index has such a high Bloomberg relevance score, since it’s calculated from indicators that are already out. But it does, and it’s forecast to be a lot higher than in the previous month, so this could be positive for the dollar as it will reinforce the view from the Empire State and Philadelphia Fed indices that the US economy is in good shape and expanding nicely. 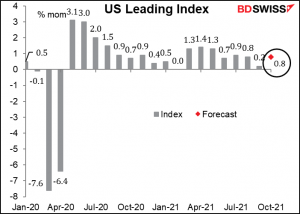 Overnight we get the stunning & shocking Japan national consumer price index (CPI). It comes out two weeks after the Tokyo CPI and Tokyo is around 10% of the country as a whole, so people don’t pay that much attention to the national CPI as they do in other countries. In any case, the national headline CPI is expected to be the same as the Tokyo headline CPI was, so this isn’t likely to cause any ripples.

What is interesting though is the Bank of Japan’s “core-core” measure of inflation. Japan’s core inflation only excludes fresh food, unlike most other countries, whose core measure excludes food and energy. The BoJ has a “core-core” measure that’s in line with other countries’, and it’s expected to show the country slipping deeper into deflation – probably because it excludes the impact of energy. This is a pretty unique situation. I don’t track every country in the world but I don’t think there’s anywhere else that’s in deflation. (Several of the Middle Eastern countries, such as Bahrain and Saudi Arabia, have inflation of below 1%, but they don’t have a core price index. Bahrain’s headline rate of +0.3% yoy is the closest to Japan’s +0.2%. Norway may be the lowest with core inflation of +0.9% yoy.) 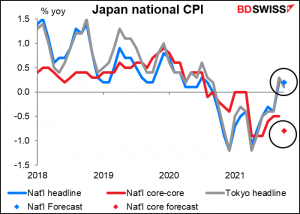 The figures may overstate the real situation in Japan. Much of the decline in prices is due to deliberate actions by the government and so doesn’t represent deflationary pressures coming from normal economic activity. For example, the “communications” component was down 28.3% yoy in September thanks to the cut in mobile phone rates. That alone knocked 1.26 percentage points off the headline rate of inflation. On the other hand, “recreation services,” which I assume is where they hide hotels, was up 6.1% yoy as last year’s “Go To Travel” discounts fell out of the year-on-year comparison (they were down 7.5% yoy last October). That added 0.31 ppt back to the inflation rate. 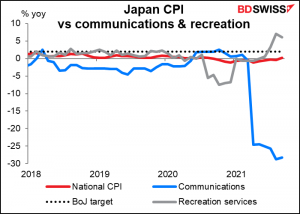 However, that’s all just a technicality. The market doesn’t delve into the details like that, people just see the headlines, trade on them, and move on to the next headline. So still-sluggish inflation will simply confirm Japan’s place as the last country on earth to hike interest rates and therefore the perfect currency to fund carry trades. JPY-negative 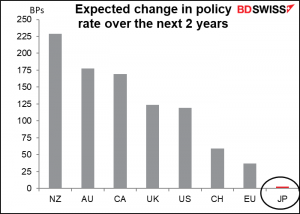 Then Friday morning at 7 o’clock as the day begins (I only link to the song on Wednesdays though) Britain announces its retail sales. Retail sales have been in a slump recently in Britain, declining five months in a row. But the market looks for a small reversal this month. That could confirm the picture from Tuesday’s employment data of an economy that’s holding up OK, not to mention Wednesday’s higher-than-expected inflation figures. This could be positive for the pound. 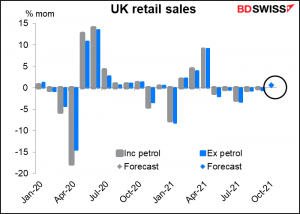 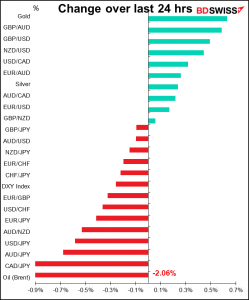