You are at:Home»Articles»Why Does Japan Depend On A Weak Yen? Negative Rates Push The Yen Lower
The Bank of Japan has maintained the mandate to act in a fashion that encourages growth and minimizes inflation. In the case of Japan, however, deflation is what has been threatening economy for decades, and the BOJ has pursued a policy of very low rates in the hopes of stimulating demand and economic growth, keeping interest rates negative and pushing the JPY lower against the USD. 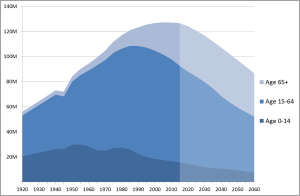 Japan is a rich country with very sizeable overseas investments but it is also plagued by a staggering public debt burden, a lack of resources and poor demographics. The ageing, declining population, reliance on energy imports and public debt burden make increasing the amount of foreign earnings a necessity for Japan which can no longer afford a strong currency.

Immigration would fill the gap in Japan’s ageing workforce but the nation is not open to mass immigration. Even if Japan had the workforce however, it lacks the home-grown energy to power its economy. Post-Fukushima, almost all the nation’s nuclear power plants remain offline, leaving Japan dependent on imported energy, the price of which fluctuates according to global supply and demand factors.

Repatriating The Yen
Japan’s exporters have long been shifting their operations overseas, but, have remained headquartered in the country, repatriating their foreign income earnings. If Japan is to make the most of its overseas investments in order to deal with its domestic problems, it needs to ensure that its currency remains weak, so that when those foreign currency earnings are repatriated, they buy more yen. Meaning that those Japanese investors in overseas assets will receive a foreign currency income stream that will be worth less, in yen terms, if Japan’s currency rises. Therefore, the weaker the yen remains, the greater the value of those foreign earnings in yen terms, helping, along with repatriated investor funds, to solve the country’s predicaments. For ageing Japan, keeping its currency weak is now a national necessity.