One of the notable things about the market nowadays is that inflation expectations have been rising around the world. We can see that by looking at the 10-year breakeven inflation rates. (These are the inflation rates at which you would break even buying either an inflation-adjusted 10-year bond or a normal 10-year bond.) They’ve gone up in every country that I track. 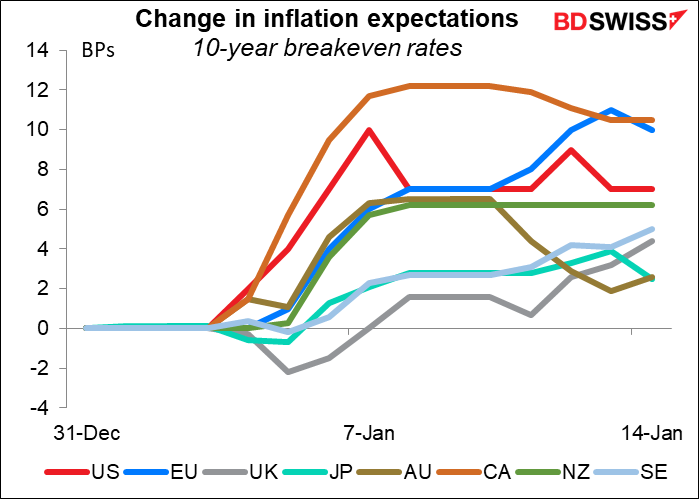 As inflation expectations rise, so too have expectations for central bank policy normalization – at least in the US. The big debate over the last week was when might the US economy be recovered enough that the Fed could start “tapering” down its monthly bond purchases. The FOMC has said it would keep the purchases at least at that level until the economy has made “significant progress” towards its goals of full employment and stable prices, which it now defines as over 2%. Some members of the rate-setting Federal Open Market Committee (FOMC) speculated that it might be as early as the second half of this year; others disagreed.

As the talk waxed and waned, US Treasury yields rose and fell and the yield curve steepened and flattened. 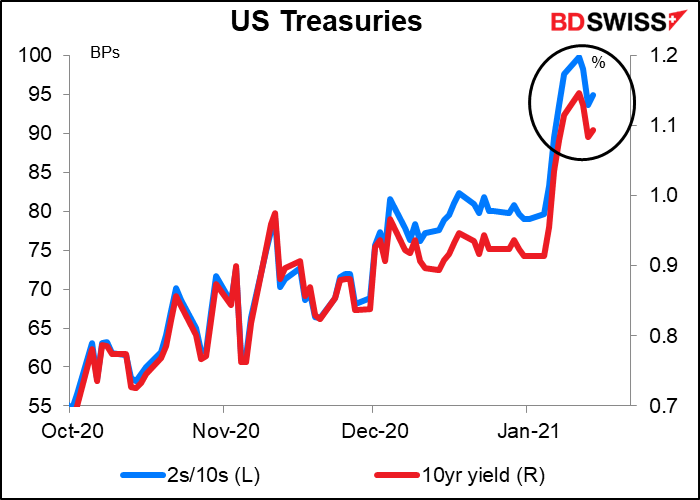 The odd thing is, the US released its inflation data – the consumer price index (CPI) – this past week, and it didn’t show any big acceleration of inflation. The headline rate of inflation rose a tic but the rate of core inflation (excluding energy & food prices) was unchanged. 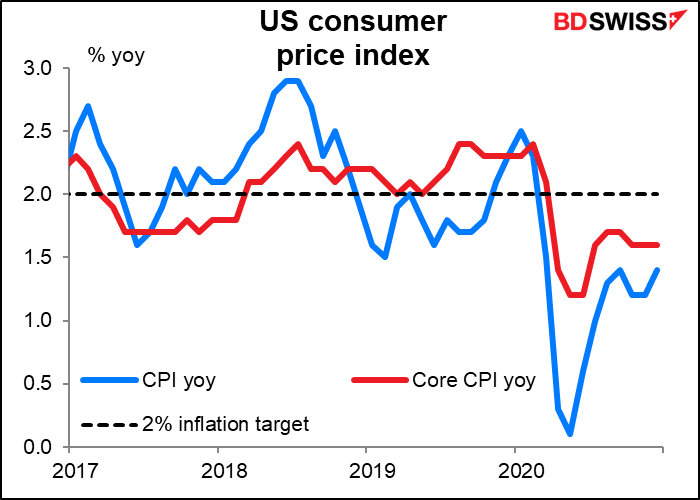 If we take the most recent inflation numbers and annualize them, it’s clear that inflation is trending lower, not higher. 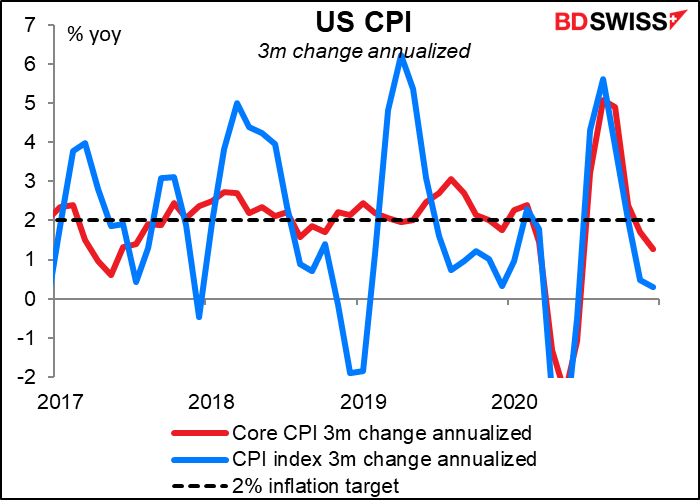 The key trend in this pandemic world is the divergence between the price of goods, and the price of services. That’s probably because the pandemic has caused a big change in the demand for certain goods. The price of bicycles and used cars for example have soared as people move away from mass transit. Service prices on the other hand have fallen as many businesses struggle to stay afloat.

Eventually the shift in consumption patterns will have played out – supply is increasing while demand is gradually being satisfied – and so I don’t expect those shifts to produce a lasting change in the inflation rate for goods. 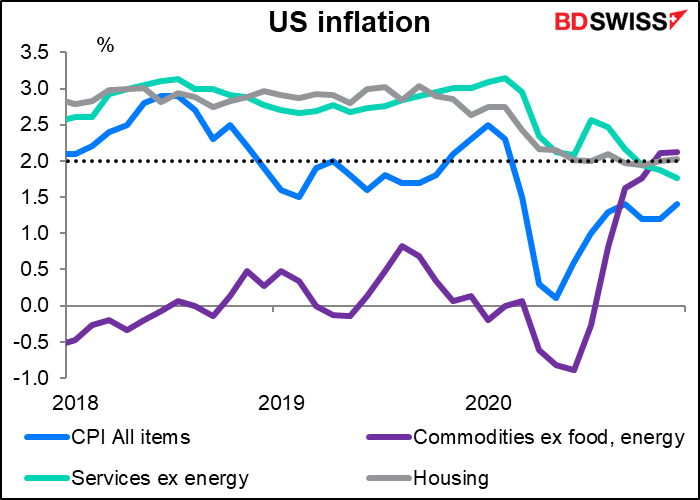 But so-called “labor scarring” – the long-term destruction of jobs – is likely to keep downward pressure on services. The number of permanent job losses has increased dramatically. This should ensure that the supply of labor for the service sector exceeds demand for quite some time. 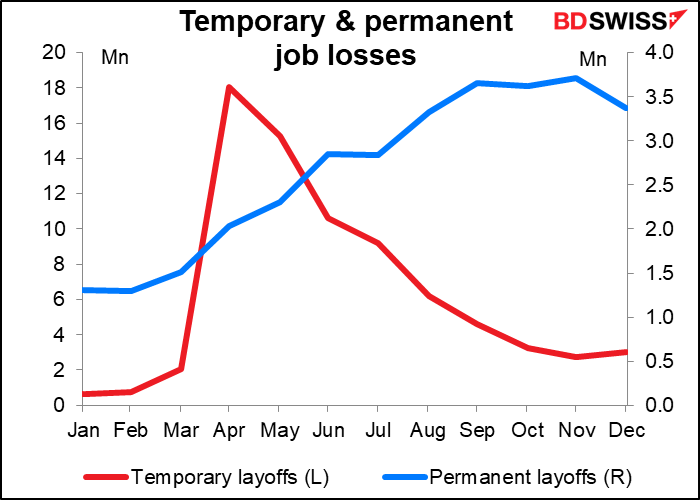 Against that background, let’s consider how likely it is that the Fed hits its target for inflation any time soon.

Fed Vice Chair Clarida Thursday said that the Fed wouldn’t begin to tighten policy “until we get 2% inflation for a year.” How often has that happened?

And don’t forget: Clarida was if anything being hawkish. The official wording is that the Fed “will aim to achieve inflation moderately above 2 percent for some time so that inflation averages 2 percent over time…” (emphasis added) 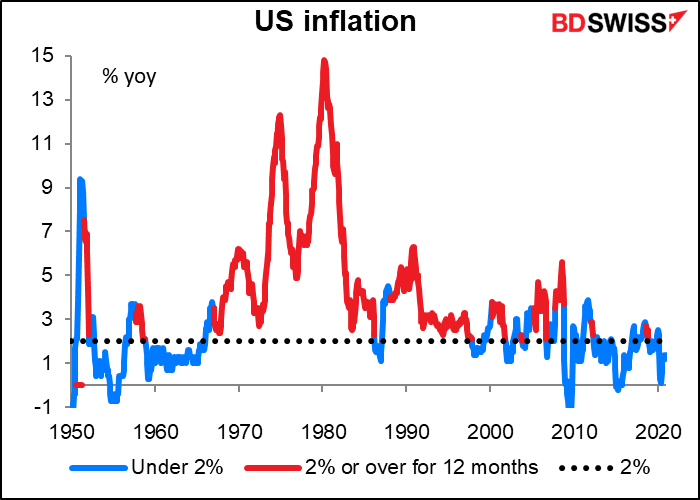 Please don’t make me produce a similar graph for Japan. OK you win. January 1992 was the last time they had inflation of 2% or higher for a year. (Full disclosure:  March 2015 should be there too, but it doesn’t show up on the graph because it’s only one month. But that follows a hike in the consumption tax in April 2014 so it doesn’t count.)

I don’t know if Japan is a harbinger of the way the rest of the world will go, but I wouldn’t discount the idea entirely. 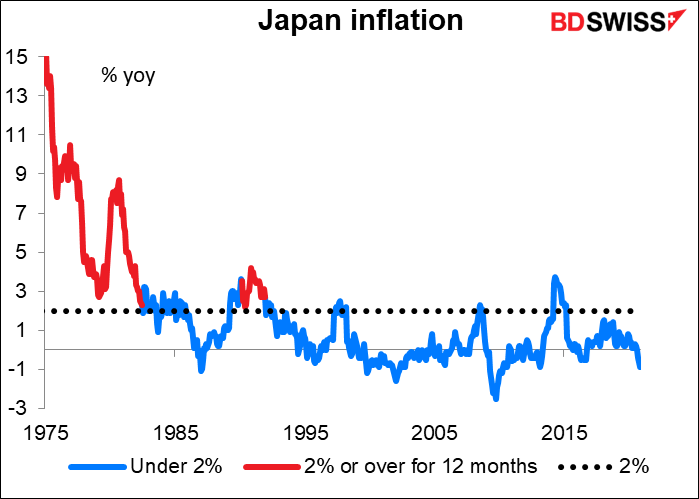 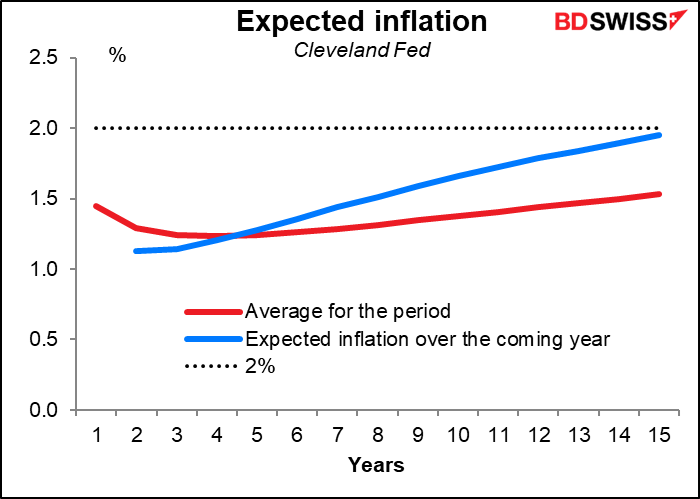 (Note:  the Cleveland Fed’s method of estimating the future inflation rate includes several surveys of forecasters, inflation swaps, actual CPI data, and some Treasury bond yields. It does not include any data from Treasury Inflation-Protected Securities (TIPS) market, the breakeven inflation rates that are usually used to predict expected inflation (e.g. the first graph in this essay.) I believe this is a more accurate way to forecast inflation (as do they, of course), because the TIPS market is affected by liquidity issues, taxes, and other matters not related to inflation. The Fed’s recent purchases of TIPS for example have boosted the breakeven rate by pushing up the price of TIPS. Also I’m from the Cleveland area so I naturally go along with what they recommend, except for my district’s representative in Congress, “Gym” Jordan, who’s an idiot.)

Finally, let’s take a real-world example. What happens to a country’s inflation rate when it does manage to suppress the virus and get back to normal? When it doubles its fiscal deficit to boost public works spending and payments to the unemployed, then finally gets everything under control and reopens its economy? Does the pent-up demand cause inflation to skyrocket? We have only to look at China to find the answer to that, because that’s exactly what happened there. And the answer is: no discernable impact. The overall rate of consumer price inflation is fluctuating around zero, while core CPI – excluding food and energy — has been steadily trending lower. There’s no indication that the pandemic has caused any acceleration in inflation in China. 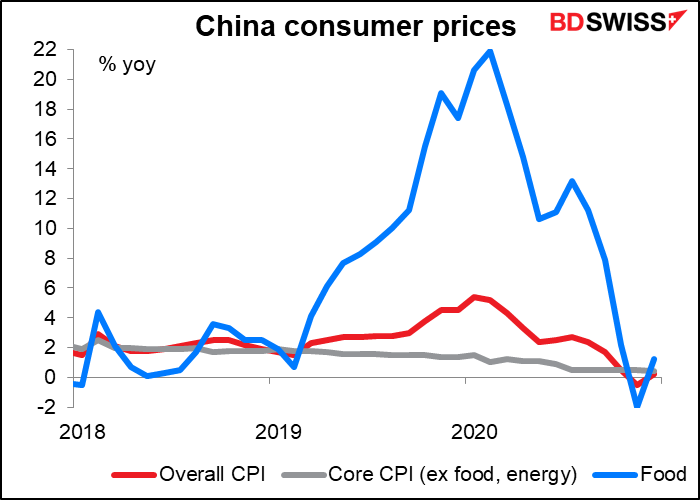 Conclusion:  I think the market is getting overly concerned about inflation, particularly with regards to the US. I expect inflation to remain low for quite some time. As a result, I expect the US bond market to retrace much of its losses and for the dollar to weaken as a result.

There’s a lot going on next week. The main event though will not be economic, but rather political:  the start of the Biden administration in the US on Wednesday. Many of us are looking forward to this event immensely. Let’s hope that it goes off smoothly and peacefully.

As for the financial world…I follow seven central banks (the US, Eurozone, Japan, UK, Canada, Australia, and New Zealand). The Reserve Bank of Australia meets 11 times a year, the others eight. That’s 63 meetings a year. My guess is that for the first half of this year – around 31 meetings or so – nothing major will happen, except maybe with the Bank of England. So what are we to look for at these meetings? Mostly their tone about how they see their economy developing – recovering or not recovering – and when, as Fed Chair Powell put it, they might start “thinking about thinking about tightening.” The market tries to discount events in the future.

This coming week we have the Bank of Canada (BoC) (Wednesday) and the Bank of Japan (BoJ) and European Central Bank (ECB) (Thursday). I don’t expect any of them to make any changes in their rates or their bond purchase programs. What will be interesting is their evaluations of their economies. The BoC releases its quarterly Monetary Policy Report while the BoJ releases its quarterly Outlook for Economic Activity and Prices. How do they see their economies developing? Are things going better or worse than they expected back in October? When might they start “thinking about thinking about” withdrawing some of the extraordinary loosening? (It’s probably too early to get even a hint of that.)

The Bank of Canada is still growing its balance sheet by about CAD 2.9bn a week, much more slowly than it was earlier in the year (note the different scales – the BoC has pumped up its balance sheet over 3x as much as the ECB or BoJ). The ECB and Bank of Japan appear to be “tapering” slightly, but that’s probably just seasonal – we’ll have to see what if anything they say about that. I don’t expect them to announce any plans to change the pace of their bond purchases at this time – the ECB made a heap of changes at its last meeting, the BoC is standing pat, and the BoJ never does anything anyway. 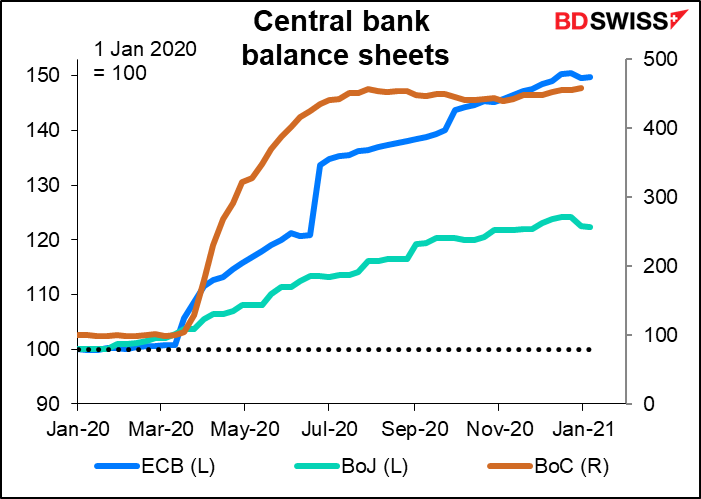 With the Eurozone in deflation, the ECB will probably repeat its comment from December about how it will “monitor developments in the exchange rate with regard to their possible implications for the medium-term inflation outlook.” In fact it might even “monitor closely!” 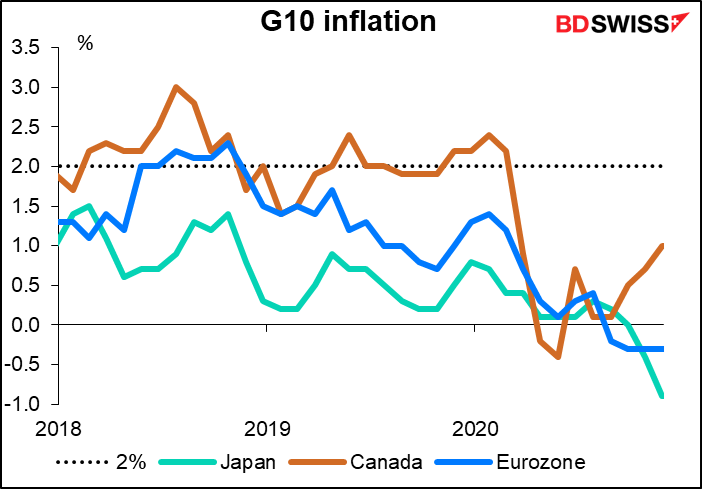 But will it do anything? With EUR/USD coming down now and the euro’s trade-weighted index lower than it was at the time of the December meeting, I sincerely doubt if they’ll take any concrete steps to push the currency down. In any case it’s mostly a dollar issue, not a euro issue, so there’s not much they can do. 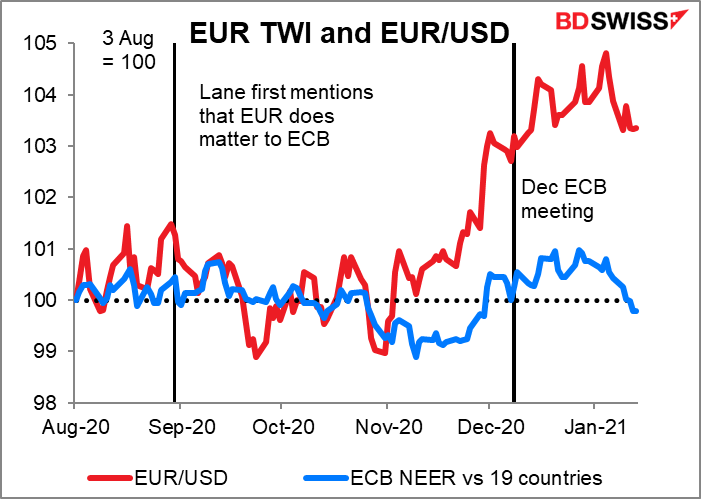 The UK Is expected to see its annual inflation rate accelerate by one tic, as is New Zealand, while Japan is forecast to slip further into deflation. No forecast is yet available for Canada. These are headline inflation numbers and so are affected by higher energy prices. We saw in this week’s US inflation data that the headline rate of inflation rose 2 tics (to 1.4% yoy from 1.2% yoy) but the core rate remained stable at 1.6% yoy. I would expect something similar here. Without signs of lasting higher core inflation, central banks will certainly not start tightening their policies. 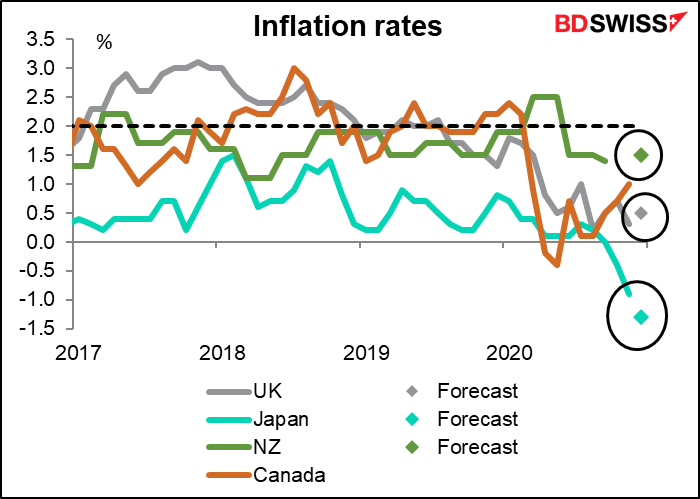 Then on Friday the never-ending round of purchasing managers’ indices (PMIs) starts all over again with the preliminaries from the major industrial countries. (Japan and France aren’t on this table because there’s never a consensus forecast for Japan and the forecast for France isn’t available yet.) They’re expected to be lower across the board, particularly the UK and particularly services. Manufacturing is forecast to remain in expansionary mode in all the countries, but services, which have been contracting except in the US, are expected to fall even more. Not good! 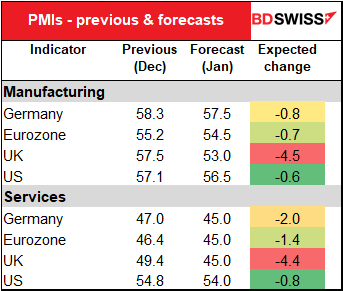 Because Monday is Martin Luther King Day, a holiday in the US, the Department of Energy’s weekly petroleum inventory data will be released on Friday, not Thursday as usual. 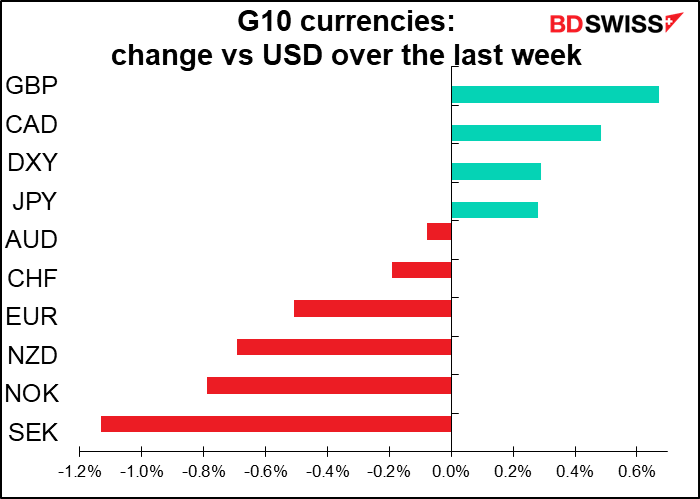