As the virus count falls in major countries and the vaccine roll-out proceeds with fits and starts, the mood in markets is improving. It helps too that financial conditions are extremely loose, meaning there’s a lot of money floating around looking for a home. 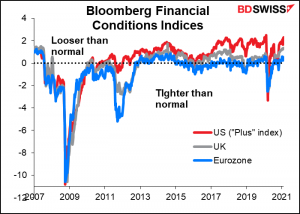 As a result, stock markets are moving further into record territory. 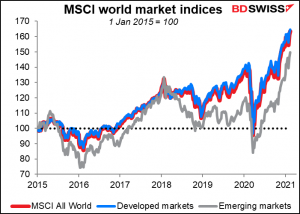 Industrial metal prices are climbing too as investors discount a global recovery. 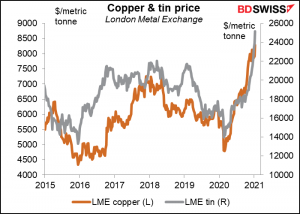 But oil prices remain under pressure as people are still moving around less than they were. 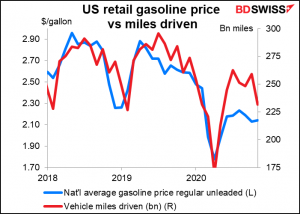 Long-term bond yields in some countries have been rising as investors look for economic activity to pick up. On the other hand, yields of riskier bonds have been falling as investors get more certain about the outlook. One result: UK ten-year bonds now yield more than those of the perenially fiscally challenged Italian government (an unusual but not unprecedented situation). For the FX market, this reflation trade suggests a few standard plays: 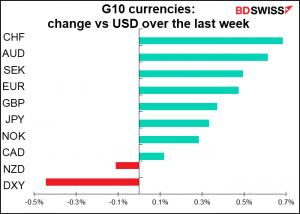 The highlight of the week will probably be Wednesday’s minutes of the January Federal Open Market Committee (FOMC) meeting, where nothing was decided – therefore it’s important to hear the details beneath the calm façade.

The US, UK, Canada, and Australia release their retail sales figures. Retail sales in these countries have surged past where they were before the pandemic began, but are showing signs of flagging.

Finally, on Friday we’ll get the most up-to-date view on the major economies as the preliminary February purchasing managers’ indices (PMI) for Japan, the EU, UK, and the US are released. These will complement the Empire State and Philadelphia Fed indices coming out earlier in the week.

(Note: the consensus forecasts used in this report are normally revised as the day of the indicator draws near.)

FOMC meeting minutes: The meeting itself held no major surprises. The statement was little changed from December, except the Committee downgraded both their view of the immediate future and further out. There was of course more detail in the hour-long press conference, where Chair Powell signalled that the Committee’s economic outlook has improved for this year in response to vaccines and fiscal policy developments. Nonetheless, he once again stressed that it’s “premature” to consider tapering their bond purchases and downplayed the risk of inflation from the administration’s fiscal support.

The market will scrutinize the minutes for the Committee’s view on when they might “begin thinking about thinking about” tapering down their bond purchases. Ahead of the meeting there seemed to be some difference of opinion, with a few members suggesting that if everything goes as planned, they could start tapering sometime in the second half. How prevalent were these views by the time the meeting started? Also, given Chair Powell’s focus on the labor market, what are the other members thinking about that, too? 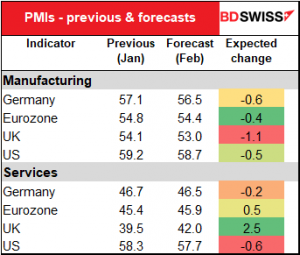 The mixed outlook in the US would be confirmed by the Empire State manufacturing survey and the Philadelphia Fed business outlook survey, which are also expected to be mixed: the Empire State up a bit, the Philly Fed down a bit, both showing continued expansion but at a low(er) level. Inflation data from the UK (Wed), Canada (Wed), and Japan (Fri) are expected to show inflation still under control globally – as did this week’s data from the US and China. (No forecast available yet for Canada). 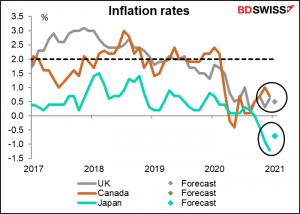 Inflation data has had less market impact than usual recently, and when it does affect the markets, it’s more on the bond markets than on the FX market. Last week’s higher-than-expected EU inflation for example had no impact on EUR/USD, nor did Wednesday’s lower-than-expected US CPI move the dollar, although it did push long-term Treasury yields down. That may be because increasingly, employment is becoming the target of central banks, not inflation.

In any case, although the market is looking for higher inflation this year, it’s not looking for inflation to get back to the 2% level that might allow central banks to start normalizing policy. Perhaps by next year, though. But even so, other countries are likely to adopt the Fed’s new stance in practice if not formally and tolerate a period of above-target inflation so that inflation averages around 2% over time. Retail sales figures from the US, UK, Canada, and Australia will be closely watched to gauge how much the resurgence of the virus in recent months and the ensuing lockdowns have dampened economic activity. 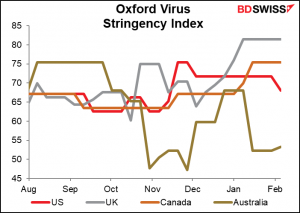 Retail sales are especially important for the US, where personal consumption accounts for some 70% of GDP. January is expected to see the first rise in retail sales in four months, which may be taken to be a sign of recovery and positive for US assets. 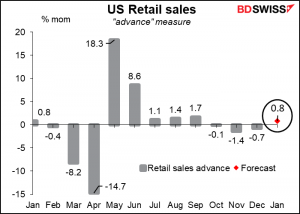 Elsewhere, sales are expected to be up sharply in Australia, where the pandemic is pretty much under control and lockdowns are limited, but down in the UK, where the national lockdown intensified in January. (No forecast available for Canada.) Personally, I’m amazed at how retail sales have rebounded. The only thing I’ve bought over the past year that I couldn’t eat was two pairs of shorts and two pairs of trousers during the summer (and I never wore one of the trousers, because I so rarely went out of my house anyway.) But the pandemic has spurred a big shift in spending as normal people changed their habits. For example, used auto prices in the US went through the roof as people abandoned mass transit and bought a car that they could isolate in. Sales of bicycles also soared. 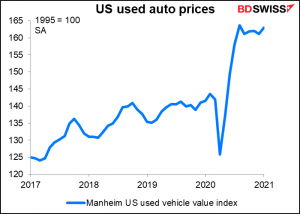 People who couldn’t go to the gym any more bought Peloton bikes and other exercise equipment to use at home. I’ve heard that in some places in the US it’s difficult to find dumbbells for sale nowadays. Plus, in some cases, the government support for the unemployed may have exceeded their earnings when they were at work, so some people who were in low-wage jobs before may have more income than they did while working. That’s why total personal income in the US is higher than it was before the pandemic. 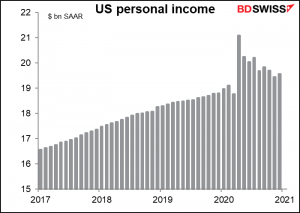