You are at:Home»MARKET PREVIEW»USD & JPY Up, Commodity Currencies Down on “Risk-Off” due to Inflation Fears; US CPI

The theme of the day was “risk-off” as investors anticipated a worrisome US consumer price index (CPI) reading today (see below). The S&P 500 was down 1.8% at one point but managed to close down only 0.9%, however the futures are indicating a lower opening today (-0.4%). The sell-off was widespread, with 417 companies in the S&P 500 and 22 of the 24 industry groups falling. Europe did even worse, with the STOXX 600 down -1.97% as 562 of its constituent companies falling.

There were several Fed speakers yesterday and they all said basically the same thing, which is basically the same thing they’ve been saying for weeks, i.e.: we’re not worried about a transitory increase in inflation and it’s way too early to start talking about tapering. Fed Gov. Brainard (V) said the US economy is on the road to recovery but still faces risks and it’s premature to discuss reducing monetary policy support. The relatively hawkish Philly Fed President Harker (NV) said that “there’s no reason to withdraw support yet.” Presidents Bostic (V), Mester (NV), Daly (V), and Bullard (NV) all said more or less the same thing; I won’t bore you with the details.

These comments seem to be somewhat reassuring to the markets in that they clearly indicate that the Fed isn’t thinking of tightening right now, but then you run the risk of the other problem, namely the dreaded “behind-the-curve syndrome.” If suddenly they wake up one day to find inflation stable at 5%, what would happen then? Bam!

On the other hand, if inflation does move up and they don’t tighten, that just means lower real yields and therefore a weaker dollar.

Among currencies, the biggest mover was AUD. Initially the currency fell after yesterday’s Federal budget failed to provide a lift for the currency. The budget was relatively expansionary; it forecast a budget deficit of 5% of GDP for FY21/22, only a little less than 7.8% for the current FY. This suggests that they’re in cahoots with the Reserve Bank of Australia (RBA) in trying to get the economy to “run hot,” which could in theory mean an earlier-than-expected normalization of rates – or maybe just lower real interest rates.

Subsequently the main impetus to the currency seems to have been global risk sentiment. You can see how AUD/USD (red line) and the S&P 500 futures (blue line) traded largely in line after the European day got started yesterday… 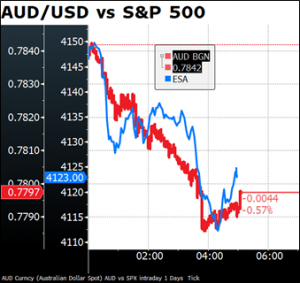 On the other hand, the safe-haven USD and JPY were the main gainers, which makes sense, too.

Then the remaining question is, why did CHF decline? As a “safe-haven” currency, it should’ve risen too along with JPY.

My guess is that it’s because of the underperformance of Swiss bond yields recently. While they did in fact jump yesterday (well, as much as negative rates can be said to jump – from -0.192% to -0.135%. Maybe we should say “swam toward the surface”) they have risen less than other European bond yields so far this year. That makes it more attractive for Swiss investors to put their money into EUR-denominated bonds. 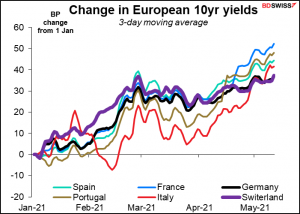 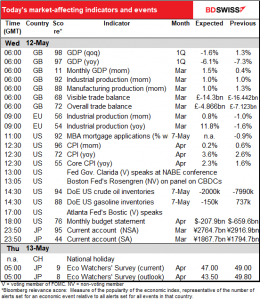 It looks like there’s a lot on the schedule today, but a lot of it is the UK “short-term indicator day,” which is already over. The data were much better than expected. 1Q GDP was a little bit better than forecast, but March GDP alone was much higher, industrial production was much higher, and the trade deficit was narrower. Good show Britain! 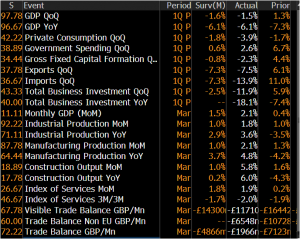 Moving right along, we now turn to the US consumer price index (CPI). A few months ago, no one cared about the CPI, because a) it had convinced everyone that any rise in inflation would be only “transitory,” and b) the Fed said it would be happy to see “inflation moderately above 2 percent for some time” anyway. However, people aren’t so sure anymore: they’re not so sure that any rise in inflation will be only “transitory” and they’re not so sure that it will be just “moderately above 2%.” In fact, they’re getting more and more nervous about inflation.

The headline CPI is expected to leap to +3.6% yoy. That would be the highest since September 2011. Even the core CPI, which excludes oil prices, is expected to go above the Fed’s 2% target. There are a lot of bottlenecks in the economy, such as airfares (fewer planes flying nowadays) and car rentals (car rental companies either went out of business or cut their fleets drastically) as well as supply/demand imbalances caused by a shift in demand (used car prices being Exhibit #1.) 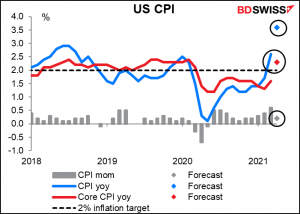 The Fed says that its forward guidance is “outcome-based,” that is, they want to see “substantial progress” toward meeting their goals before they take any actions. In the past they usually moved based on forecasts, owing to the long lags with which monetary policy affects the economy (nine months or so), but not anymore. With the CPI soaring like this, the market is left wondering then how high “moderately above” is and how long “for some time” is.

Furthermore, the Fed has said that “longer-term inflation expectations that are well anchored at 2 percent foster price stability…” and a host of other wonderful things. With breakeven rates rising every day, how far can they rise above 2% before the Fed decides they’re no longer “well anchored”?

Half an hour after the CPI is released, Fed Vice Chair Clarida (V) discusses the outlook for the US economy in an online speech to the National Association for Business Economics (NABE). There’s a Q&A session afterward. If he doesn’t say anything about the CPI in his speech, he’s sure to get a question about it. That will be interesting.

Overnight, Japan releases its current account data. It’s expected to rise a bit on a seasonally adjusted basis, which is the one I look at, but the market looks at the NSA version for some peculiar reason. In any case neither is expected to be dramatically different so I wouldn’t expect much impact. 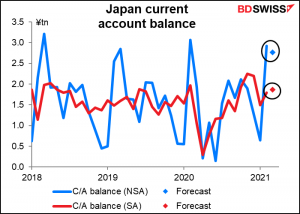 Finally, we have the Japan Eco Watchers Survey, which holds the record for the Lowest Bloomberg Relevance Score of Any Indicator I Follow. So why do I follow it? Because I think it’s a better indicator of the service sector than the more widely watched but later Tertiary Sector Index or even the service-sector PMI. It’s expected to be bad, which might be negative for Japanese stocks and therefore positive for the yen, if in fact anyone cares about it. 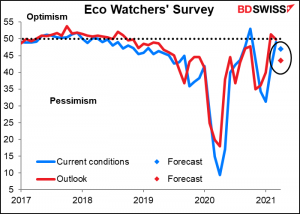 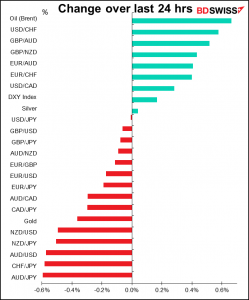