You are at:Home»MARKET PREVIEW»USD Up on “Risk on” Mood, but that’s Fading; UK Budget 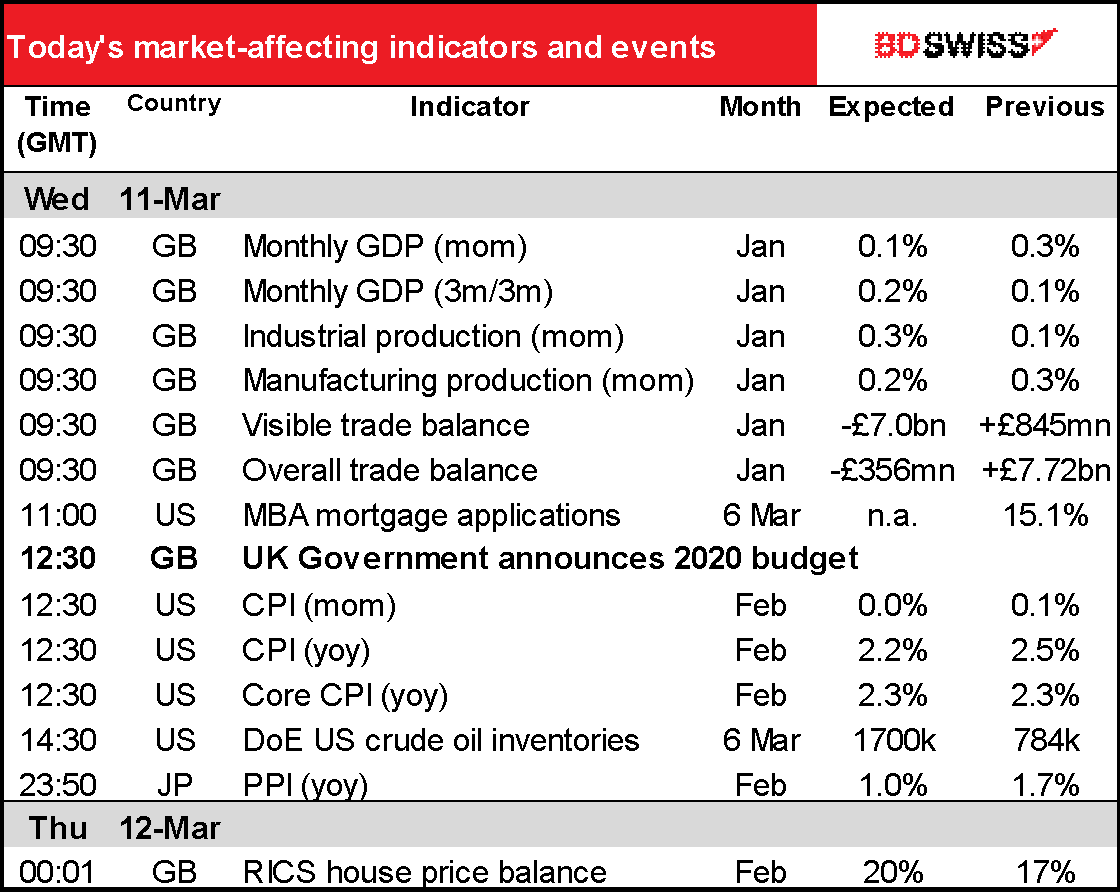 There’s hope that governments around the world will enact some fiscal stimulus measures as well as monetary.

But this morning, after some initial attempts to rally, almost all Asian stock markets have turned lower. That bodes ill for the rest of the day. South Korea, which has been hard hit by the virus, is the worst affected.

However, I’ve suddenly become much more hopeful about this whole virus issue. That’s because I heard from a friend in Shanghai this morning who said they’ve had no new cases for a long time. Furthermore, the rate of growth of new cases in South Korea over the last 7 days has been 11%, 8%, 9%, 8%, 5%, 3%, and 2%. It’s clearly slowing. The results show that even in the absence of a vaccine, the progression of the virus can be slowed or halted by social measures.

The question for me is whether Western countries, with their different traditions and legal structures, can impose the same kind of discipline as they do in China. Italy is certainly trying, but I’m most worried about the US, which is totally in denial about the whole issue (see below). Furthermore, the cost of these social measures is a guaranteed recession.

The reaction in the currency market was mixed. USD gained on the better “risk on” mood and the hopes for some stimulus measures in the US. No matter how ineffectual the current US regime is, the system of government makes it easier to take measures across the US than across Europe. But that “risk on” mood is fading, as we can see from looking at USD/JPY.  USD/JPY moved up sharply, but has since lost a lot of the gains – it soared from 102.38 to a peak of 105.92, but is currently trading at 104.34. And CHF is higher while AUD is lower, certainly not the sign of a “risk on” mood. And GBP fell ahead of the budget, which is likely to involve a large issue of new bonds (see below).

Small rant about Trump. Feel free to ignore if you like.

The problem in the US is that the President is basically suffering from dementia and is incapable of leading. But for some bizarre reason he remains so popular with the Republican base that no one dares to contradict him in public. Trump continues to insist that the coronavirus is an overblown plot by the Democrats to prevent him from getting reelected and that the proper way to deal with it is to ignore it. It’s noticeable that officials have been cutting back on his time in front of a microphone and trying to ensure that other people speak more at press conferences about the virus. For example, he didn’t even appear at a White House briefing on the virus yesterday.Maybe they’ve realized the danger to the country from having someone with diminished mental capacity as president during this crisis. One can only hope they’ll finally exercise the 25th Amendment to the US constitution, which allows the Cabinet to remove a president who’s unable to do his job.

May I just present one tweet that he put out yesterday?

If you like automobiles, how can you vote for a Democrat who all want to get rid of cars, as quickly as possible, especially if they are powered by gasoline. Remember also, no more than one car per family. I, on the other hand, have new plants being built all over Michigan, Plus!

This is simply insane. What Democrat ever said anything like that? Not to mention that the Democrats rescued GM and the auto industry in the face of Republican opposition in 2008/09. The guy is clearly out of touch with reality. That’s not the kind of person you want running the show when the country is facing an existential crisis. I think Trump is now distinctly USD-negative.

The main thing today is the UK FY2020/21 Budget.  This will be the first and best test of coordination between the fiscal and the monetary authorities that both the G7 promised last week and the G20 promised over the weekend. UK PM Boorish Johnson last week held a joint meeting with the new Chancellor of the Exchequer, Rishi Sunak, and outgoing Bank of England Gov. Mark Carney. Johnson later said on TV that “We will make sure that we give UK businesses the support that it needs.”

There’s no point in speculating on exactly what measures the government might announce. I’ll just point out that even under the current fiscal rules, which require the Chancellor to run a balanced budget on a current basis (i.e., day-to-day spending and revenue, excluding investment) in three years, he still has some room to expand spending. Appearing on Sunday talk shows, Sunak declined to say specifically whether he would keep to the existing rules. He could change the rules in ways that allow him to spend more money, such as changing the definition of “balanced” or pushing out the date by which a balanced budget has to be achieved.

On the contrary, Sunak said “we need to make sure that we respond at scale to whatever scenario comes our way.” We can therefore expect several emergency measures to help households and firms hurt by the virus, such as aid to workers whose incomes suddenly fall, increased spending on healthcare, and/or measures to help firms facing cash flow problems, such as allowing firms more time to pay taxes.

The market is therefore expecting a deluge of bond issuance to pay for all this. A Bloomberg survey of bond dealers came up with a median forecast of GBP 166bn in bond sales during the FY, the largest since the record 228bn in FY 2009/10 to rescue the economy from the Global Financial Crisis.

There’s also a good chance that the Bank of England will announce some easing measures at the same time. Gov. Carney last week said that the BoE was “coordinating with HM Treasury to ensure that any initiatives are complementary and that they will collectively have maximum impact.” He noted that the BoE’s “policy arsenal includes monetary policy instruments, special liquidity facilities, and macroprudential tools.” The market is looking for 40 bps cuts in rates this month, which translates to at least one cut of 25 bps and 15/25ths or 3/5ths of a chance of two cuts. 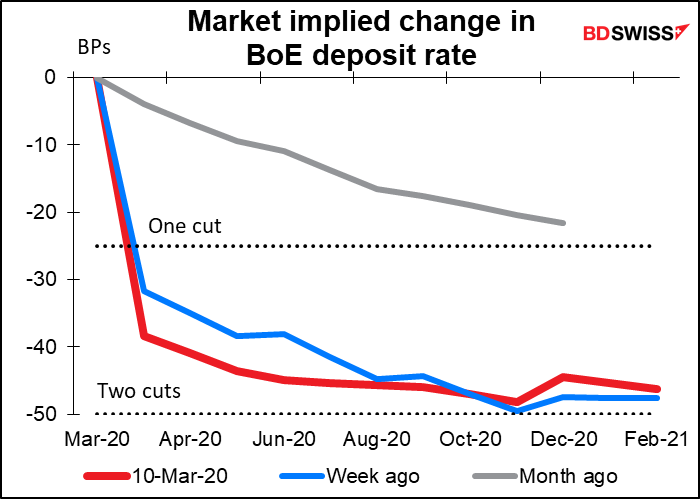 If these measures don’t come today, they’ll almost certainly come at the next Bank of England Monetary Policy Committee (MPC) meeting, the results of which will be announced on 26 March. Incoming BoE Gov. Andrew Bailey, who takes over from Carney on 16 March, las week said that he will co-ordinate the Bank’s response with the government.

In this case, I think it’s likely to cause GBP to strengthen, at least temporarily, because of the impact on growth. Both GBP/USD and EUR/GBP are sensitive to expected growth differentials. The fact that Britain can use both fiscal and monetary policy to stimulate the economy certainly is an advantage over the Eurozone, where fiscal policy is difficult if not impossible to coordinate and monetary policy is already at nearly full throttle. The US has more room to ease monetary policy than Britain does, but it’s hard to imagine a more aggressive fiscal policy than what the Trump regime has already enacted. We could therefore see GBP gaining vs EUR more than vs USD, although at the moment that’s not the case. 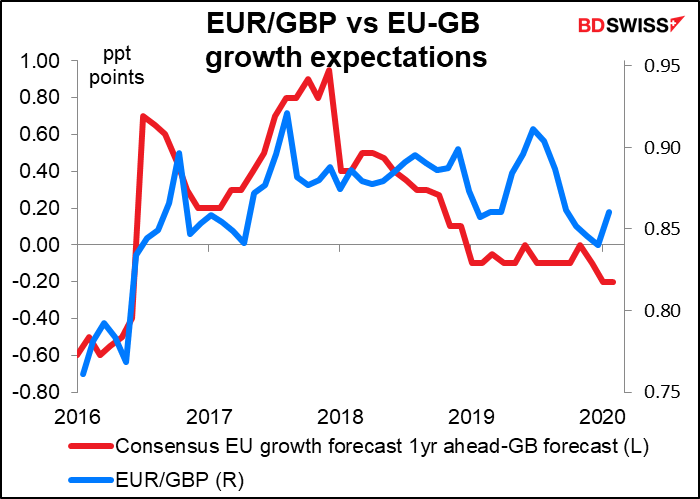 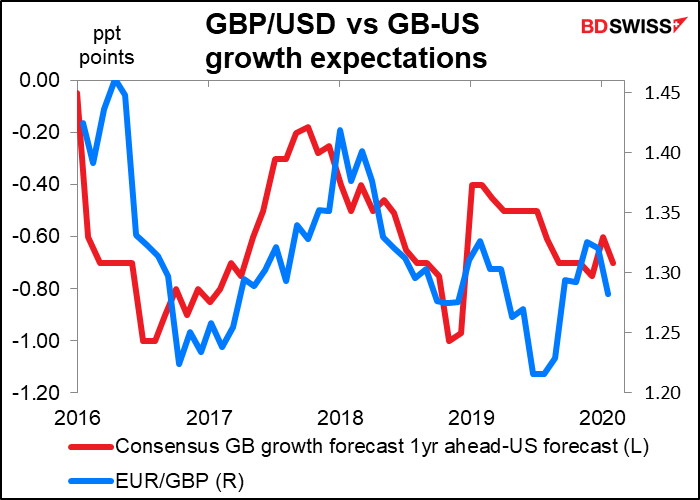 Also, today is “short-term indicator day” for the UK, with the monthly GDP figures, industrial & manufacturing production, and trade data coming out. As usual, the monthly GDP figures are likely to be the most important. They’re expected to show another month of growth, with the 3m/3m series moving up. This may be taken as a positive sign for the UK economy and could be positive for GBP. However, the market impact if any is likely to be short-lived if any, as the Budget is of significantly greater interest. 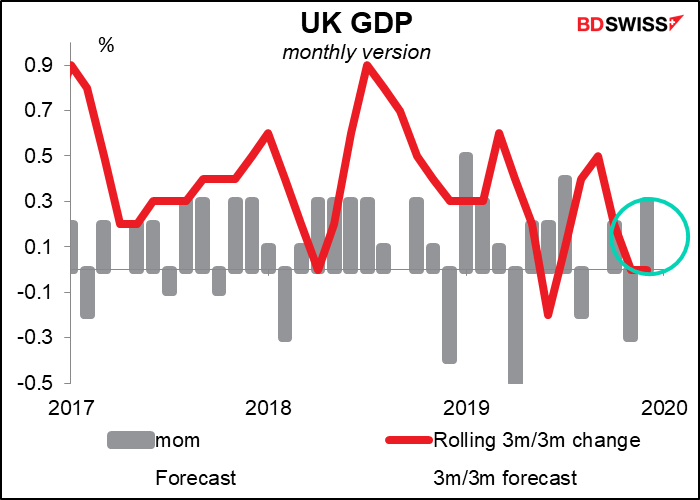 Similarly, I wouldn’t expect the industrial and manufacturing production figures to make dramatic waves in the financial world. In this case, the data are likely to be less positive for the currency – only a slight bounce-back is expected after the previous month’s steep decline isn’t encouraging. 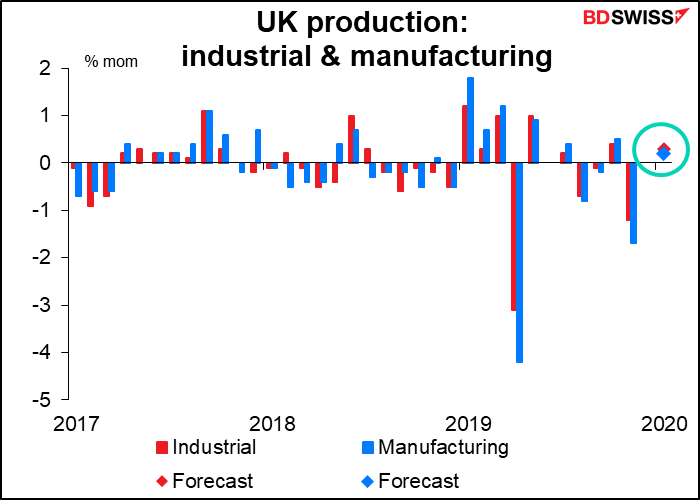 Meanwhile, the UK trade figures are a mess. They’ve been distorted beyond recognition over the last month by changes to the ownership of gold. It seems that in November and December, a US bank in London changed some of the gold in its vault to “allocated” from “unallocated.” “Unallocated” gold is held by the bank against all its gold liabilities in general and remains the property of the bank, whereas “allocated” gold is specifically, well, allocated to a certain buyer. In this case, changing it from “unallocated” to “allocated” changed the ownership from UK to US, so it was classsified as an “export” even though it’s still sitting on the same shelf in the same vault. Apparently the Office of National Statistics is trying to develop a trade series that strips out gold to avoid such issues. Because of such distortions, I think the trade figures will be of even less interest to the market than the other data coming out at the same time. 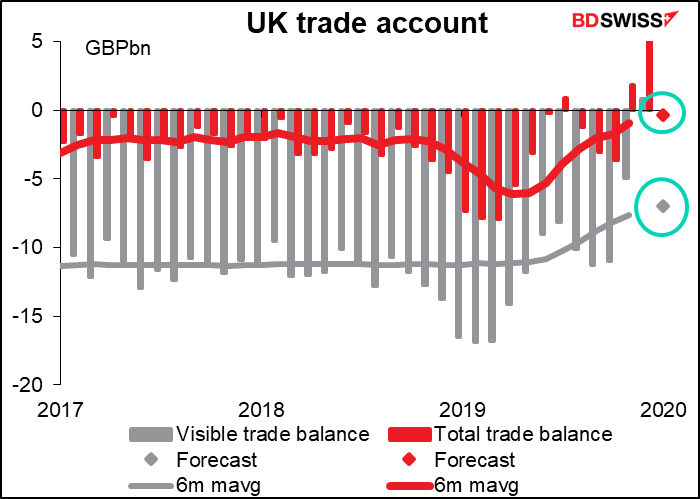 The other big item today is the US consumer price index (CPI). Ordinarily this would be a major indicator, even though it’s not what the Fed uses to gauge inflation – that’s the personal consumption expenditure (PCE) deflators. However, in most people’s minds the CPI is inflation. Furthermore, the CPI and the PCE deflator are pretty close since they’re just different ways of measuring the same thing, and the CPI comes out about two weeks earlier than the PCE deflators. (Although inflation as measured by the PCE deflators has been noticeably lower than that measured by the CPI, probably because health care has a higher weighting in the CPI than in the PCE deflators.) 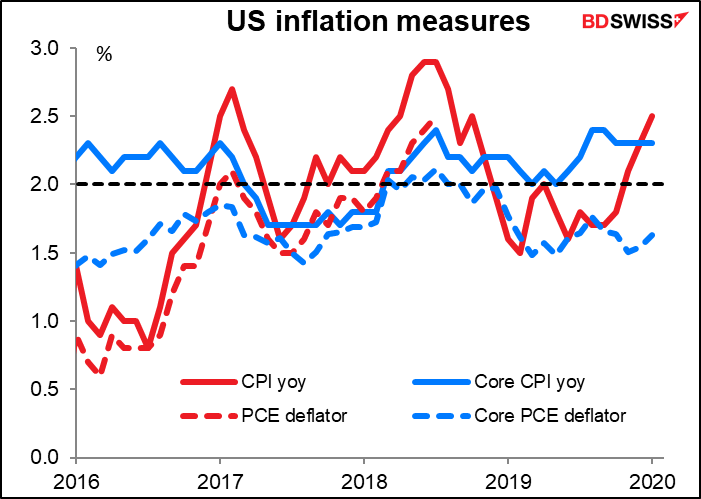 This month however there are two reasons why the CPI isn’t going to be of as much interest as usual. First off, the rate of increase of the core CPI, the more important of the two, is expected to be unchanged. That means no change in people’s expectations. Secondly, at the moment the Fed isn’t that concerned with inflation anyway. The virus count is the most important statistic for most countries nowadays, not inflation. The Fed isn’t cutting rates because inflation is too low, it’s cutting because it’s worried about economic activity collapsing. Inflation being too low is just a symptom of that. USD neutral 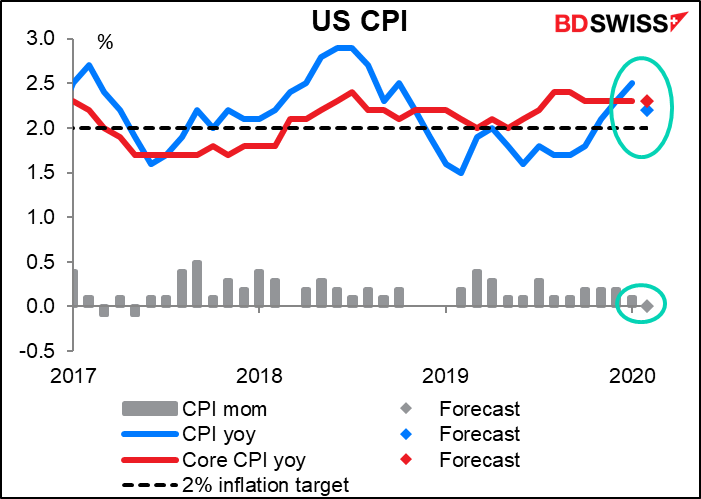 Finally, overnight the UK Royal Institution of Chartered Surveyors (RICS) house price balance is expected to show a further slight improvement. This is a sentiment indicator of chartered surveyors – a diffusion index of the proportion of respondents reporting a rise in prices minus those reporting a fall. It doesn’t say how much prices are going up or down, but it does give a quick reading on the breadth of price changes (that is, how widespread the change is throughout the regions covered). This makes it a leading indicator of house prices. It’s not that important within the panoply of housing indicators released in Britain every month, but it is watched to some degree. A further improvement would be positive for GBP. 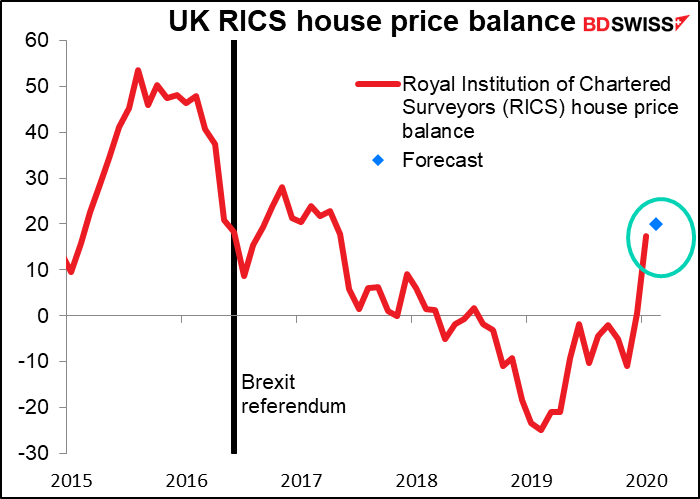 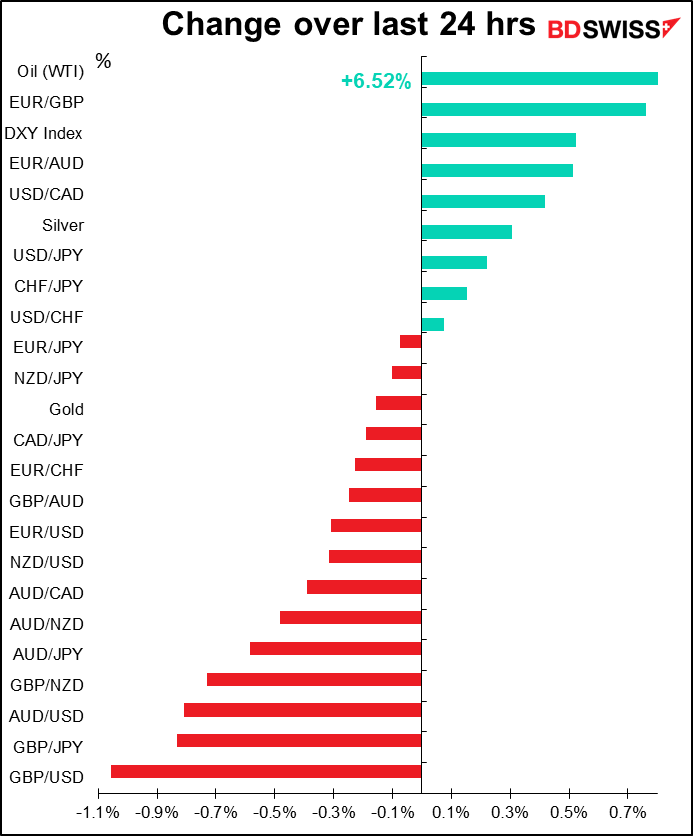