You are at:Home»MARKET PREVIEW»Markets Collapse but Risk Sentiment Recovering a Bit this Morning

Rod Stewart said “Every picture tells a story, don’t it.” Today’s story, shown in the picture below, is the collapse of global markets. The black line is the S&P 500, the red line is the VIX index of implied option volatility on the VIX. Note two things:

2) The VIX index hit almost 62% at the opening and closed at 54.5. A VIX index at that level implies a daily average move of around ±3% and average monthly move of around ±20%. A 3% move in a day usually happens less than once a year, but now it’s expected to be the typical daily move.

Of course, that was nothing compared to the oil market. It managed to recover at the end – it closed down dramatically from Friday of course but nonetheless up about 15% from the opening price. Meanwhile, OIV, the oil version of the VIX index, finished at 124, about double from Friday’s close. 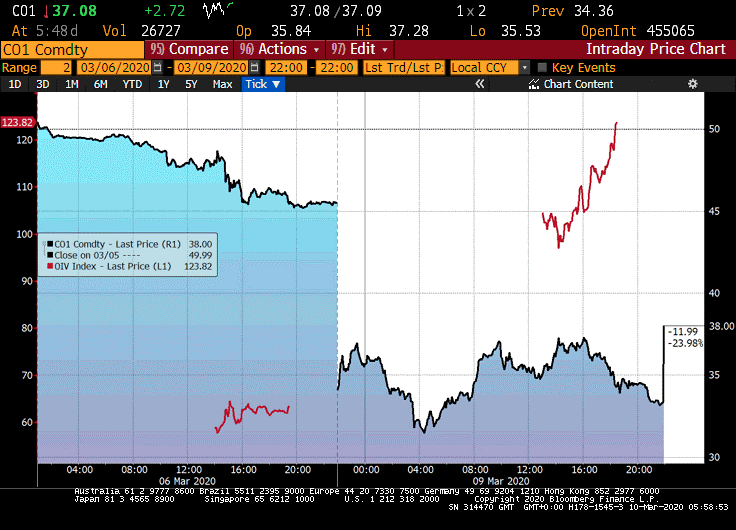 As I discussed yesterday, lower oil prices are a boon for consumers, so why – when people are worried about the collapse of consumption – are we also worried about falling oil prices, which should help things? One reason is that there apparently is $600bn in BBB rated energy debt and $2tn in BBB-. That’s two trillion dollars of debt hovering above junk grade. Lower oil prices could lead to a crisis in the debt market. Meanwhile, European banks are also highly exposed to the energy industry, led by BNP with some $22bn of loans to the industry down to Barclays with $16bn, others in between.

This may be one reason, along with the flight to safety, that US bond yields hit record lows. One-year yields are near zero. Thirty-year bonds are trading well below the Fed funds rate, the rate for overnight money. This implies that the market expects the Fed to cut to near zero by the end of the year. The market is pricing in 80 bps of easing a next week’s FOMC meeting. 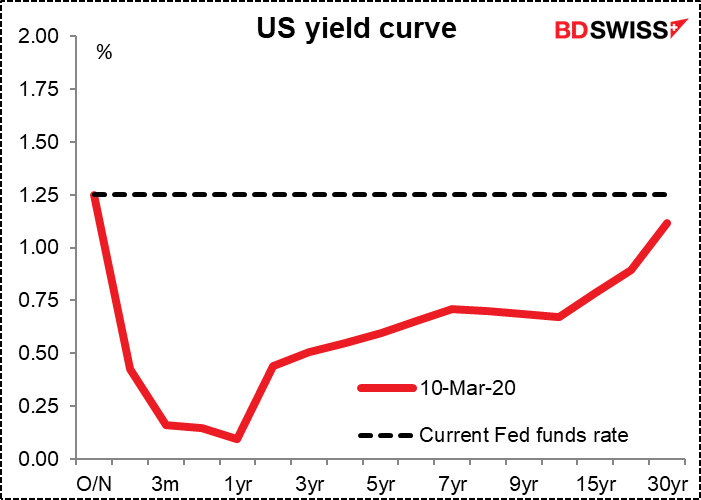 The big news in the virus world is that all of Italy is now in lockdown. All travel in the country and all public gatherings, including sporting events, are prohibited. Israel has said anyone traveling abroad has to self-quarantine for 14 days – that effectively ends the tourism business, since any tourist arriving would immediately be required to stay in a hotel room for two weeks. Imagine what that will do to their economy.

However all we’ve seen from the US administration are continued allegations that this is just a Democratic plot to prevent Trump from getting reelected. People outside American maybe can’t imagine that a presenter on Fox News actually called the virus an “impeachment scam” and accused the Democrats of using it “to create mass hysteria” so that Trump wouldn’t be re-elected. However I am seeing an increasing number of posts on social media about how Republican Party supporters are getting fed up with the Administration’s clear refusal to be honest about what’s happening.I think far from helping the Administration, this way of dealing – or not dealing, in fact – with the crisis may be helping to guarantee a clean sweep for the Democrats in November.

If the US government ignores the problem in the hopes that it will go away, they’re going to be sorely disappointed. On the contrary – if we don’t see measures taken early on, we’ll see what happened in Italy eventually. Two weeks ago, Italy had 62 cases of COVID-19, Hong Kong 69, Taiwan 26, Iran 28. Hong Kong and Taiwan quickly enacted measures for social distancing, hygiene, closures and near-universal wearing of masks. The number of cases in those countries barely budged. Italy and Iran on the other hand now have around 6000 cases each and are locking down millions.

Getting back to the markets…this morning, almost all Asian stock markets are bouncing back. There’s somewhat of a risk-on mood, perhaps spurred by the rebound in oil. The FX market has seen a similar reaction, with JPY and CHF falling and AUD, NZD and USD recovering. CAD lagged the other commodity currencies, probably because of its closer correlation with oil. .

Personally, I’m not sure the worst is over. The oil price is likely to fall further, I believe, as both Saudi Arabia and Russia have said they’ll increase production even though obviously global demand for oil is going to fall sharply. I think the reverberations of such a dramatic fall in the credit market and on a weakened banking sector can be significant. Nonetheless, this is now a day-trading market. Just watch the screens and trade with stops you’re comfortable with. I think the movement is likely to be random, based simply on the mysterious interplay of fear and greed until we have a better view of what’s going on with the virus. 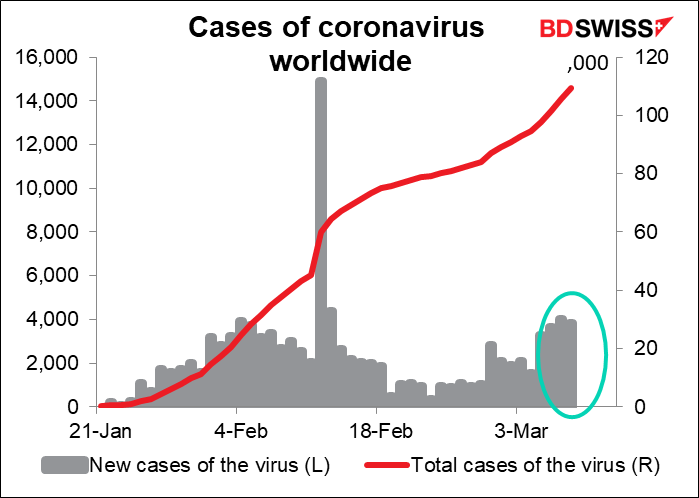 EU leaders are expected to hold emergency talks today.  Some countries are calling for Europe-wide stimulus to counter the economic impact of the virus. Measures under consideration include relaxing state subsidy rules to allow extra public spending.

A very quiet day insofar as indicators are concerned. All that’s on the schedule is the US National Federation of Independent Businesses (NFIB), the small business association, business optimism index. It’s expected to come in at 103.0, which is almost exactly the six-month moving average (103.2) = as good a guess as any, I’d say. It’s worth noting that the employment component of this index, which comes out a few days before the overall index, rose slightly to 21. That’s equal to the highest it’s been since December 2018. That’s a key point because although the S&P 500 index of large companies may symbolize America, most Americans work in small- and medium-sized companies. If they are optimistic about employment, it’s a good sign for the future of the economy. I’d say the fact that small businesses overall are still relatively confident is positive for USD. 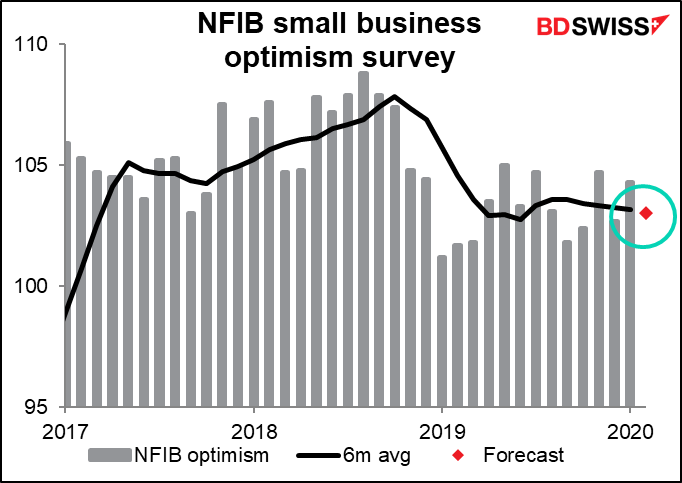 We also get the final revision to EU-wide 4Q GDP, but that’s rarely if ever revised. In the last ten years it’s only happened twice, and both times it was only for 10 bps. 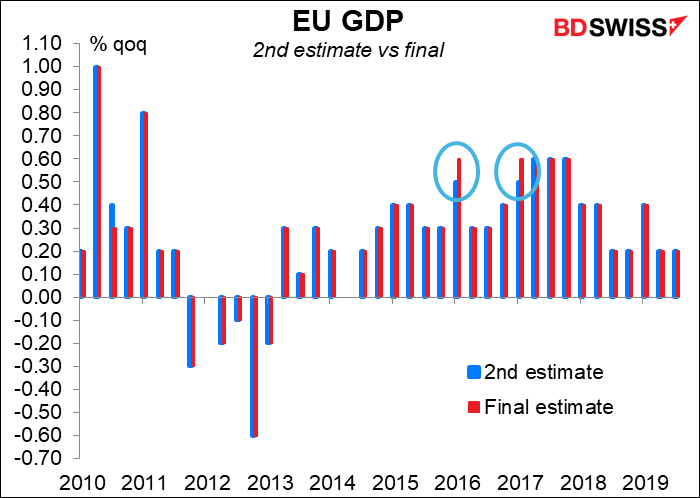 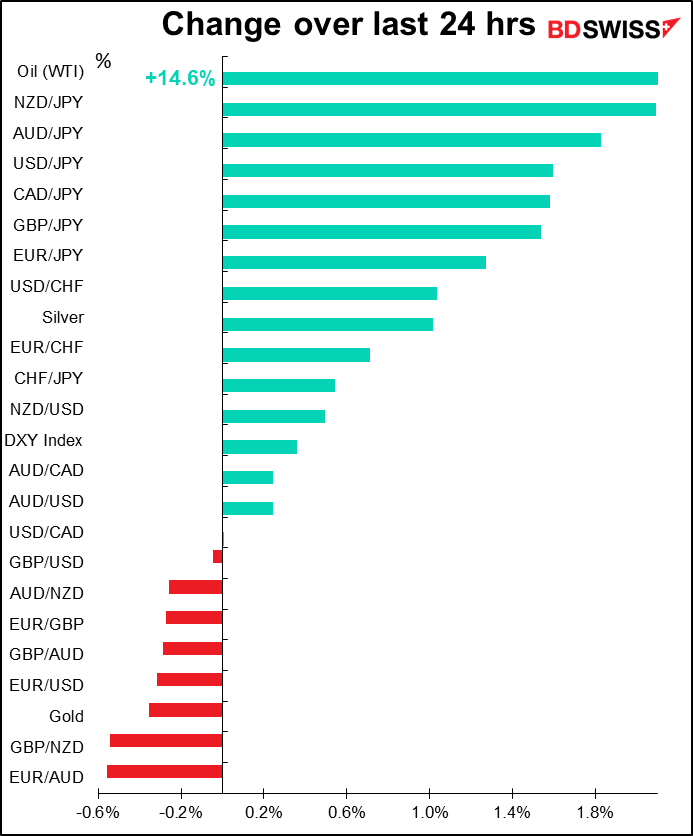