You are at:Home»MARKET PREVIEW»USD Up on Hopes that Vaccine will Reduce need for Fed Easing; US CPI, Jobless Claims, ECB Symposium 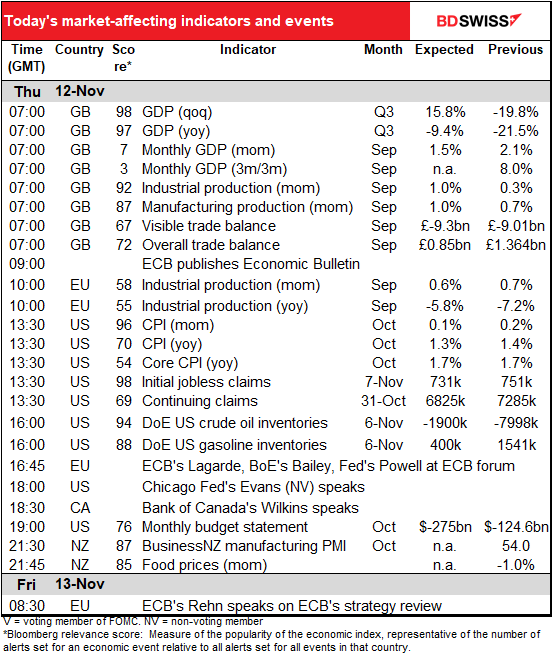 No change. Much talk about whether the Republicans are planning a coup, but much rebuttal of that talk as well, centered on the fact that President-elect Biden’s lead is too big in too many states to manage it. It seems like all the fuss about recounts is theater being played out for several reasons: 1) to comfort Trump, 2) to reinforce his image in the minds of his supporters that he’s a winner; 3) to raise money to pay down the campaign’s debts (the first $8,000 of any donation to the “stop the steal” funds actually goes to a Trump political action committee and the Republican National Committee) and 4) to prepare the way for a possible Trump run for president again in 2024. The US constitution limits a person to two terms in office, but they don’t have to be consecutive.

As for why other Republicans agree to go along with this charade, there appear to be two reasons: 1) in the short term, they want Trump to help win the two Georgia senate races, which will determine the balance of power in the senate; and 2) in the long term, they’re afraid of what Trump might say about them sometime in the future.

Meanwhile the US recorded more than 150,000 new cases of the virus, another record high. It appears that Trump was right, the US is turning the corner on the virus. Unfortunately there’s a cemetery around the corner. 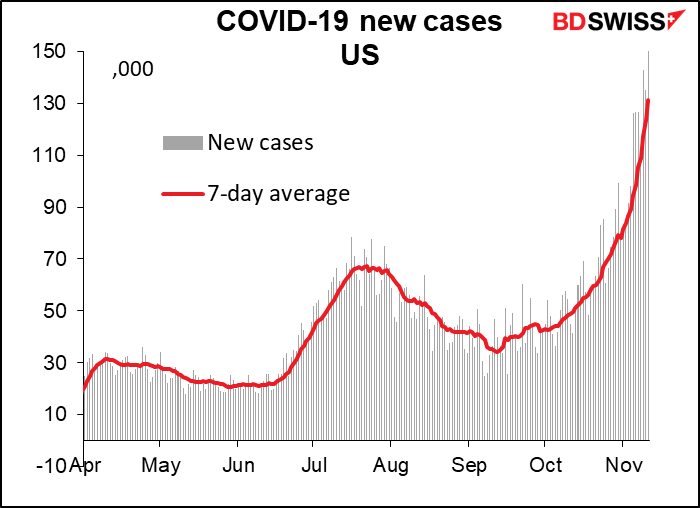 It was “risk-on” in the US markets yesterday as investors reversed some of the previous day’s trades. The S&P 500 was up yet again (+0.8%) but the NASDAQ outperformed (+2.0%) as tech stocks rebounded. This morning though Asian stock markets are mixed, perhaps due to the worsening COVID-19 situation.

The usual drill nowadays is for the dollar to fall on risk-on days, but that didn’t happen yesterday. I think that has to do with expectations that with a vaccine appearing, the Fed won’t have to ease policy as much as had been expected. The 3year/1 month fed funds swap rate has hit 0.39%, indicating that the market is expecting at least one and maybe two rate hikes over the next three years. I would doubt that under the Fed’s new inflation-averaging regime, but that’s what the market is thinking. We may hear Fed Chair Powell’s view on the matter this afternoon (see below). 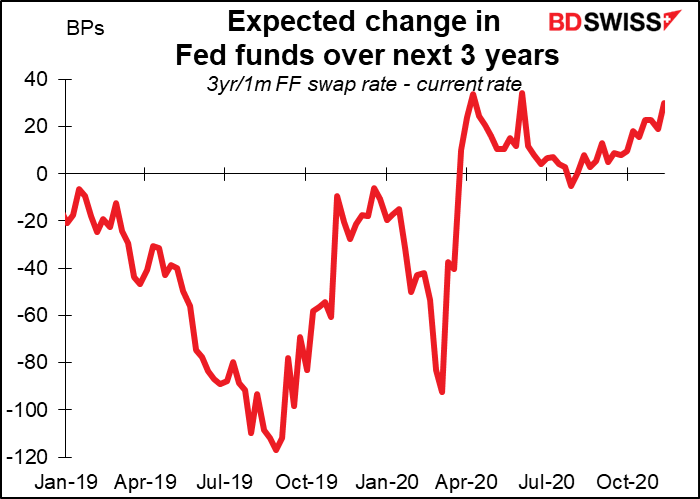 On the other hand, EUR was lower as European Central Bank (ECB) President Lagarde made a presentation to the ECB’s annual symposium yesterday (see below). She said the ECB will aim to ensure financial conditions “remain exceptionally favorable for as long as needed” and that they will accomplish this goal through their existing tools of targeted lending refinancing operations (TLRO) and the Pandemic Emergency Purchase Program (PEPP), which “have proven their effectiveness in the current environment and can be dynamically adjusted to react to how the pandemic evolves.” These remarks suggest that the ECB’s package of further easing measures in December is likely to include extending the PEPP net purchases and the TLTRO3 discount beyond the current expiry date of June 2021.

The market may start to believe in the old “monetary policy divergence” theme between the US and the EU. That could be a force keeping the euro weak – which is probably what Lagarde wants. But does it accord with reality?

Sterling fell as a Brexit agreement remains out of reach. Ireland’s foreign minister said the talks were likely to run into next week, which would miss their self-imposed mid-month deadline but would (one hopes) be in time for next Thursday’s EU video summit.

We discussed the UK short-term indicators yesterday. Q3 GDP was largely in line with expectations, but September missed and industrial & manufacturing output were also weaker than expected during the month. All told the data were even more negative for GBP than I expected. 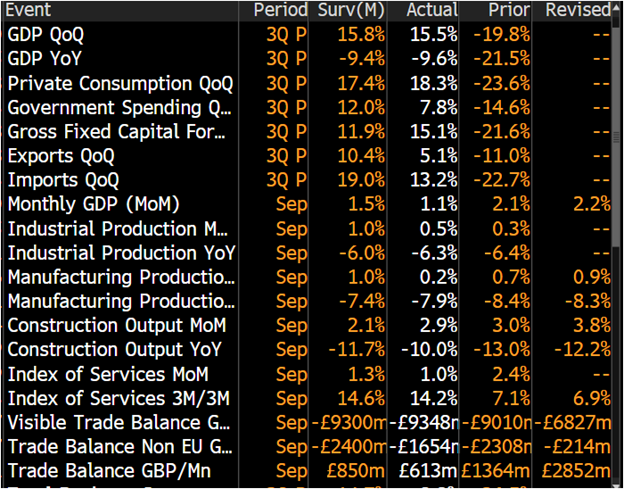 EU industrial production isn’t normally a big market-mover as it’s rather behind the times, but it’s still worth looking at. The pace of growth in September is expected to be the same as it was in August. 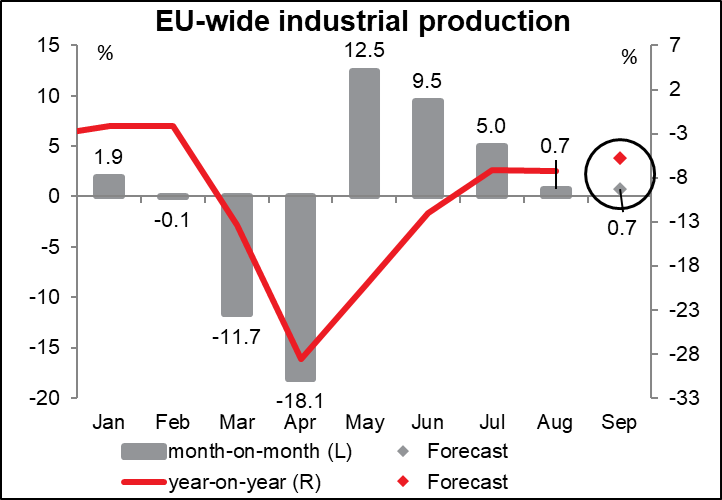 That’s pretty bad. It would indicate that output has pretty much stalled at around 5% below pre-pandemic levels. What with several countries going back into lockdown, it’s not likely to get any better any time soon, either. 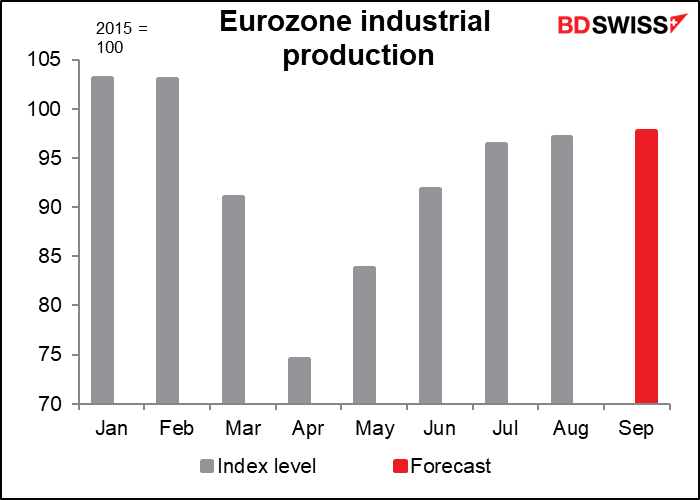 The US consumer price index (CPI) used to be a major indicator but it isn’t of such keen interest to the market nowadays since the Fed is focused more on the labor market and supporting the economy than it is on combating inflation (or deflation).

Just for the record, headline CPI is expected to tic down (on a yoy basis) while core CPI is expected to be unchanged at 1.8% yoy. During olden days, core CPI at 1.8% yoy – i.e., closing in on the 2% target – might have started ringing some alarm bells about the Fed tightening pre-emptively, but that was a different era. Now the Fed has not only abandoned the very idea of tightening pre-emptively, it said it will allow inflation to rise above 2% for some time. Moreover, with the yoy rise in headline CPI slowing, it’s unthinkable. Probably the indicator will be noted but not have much impact on the markets. 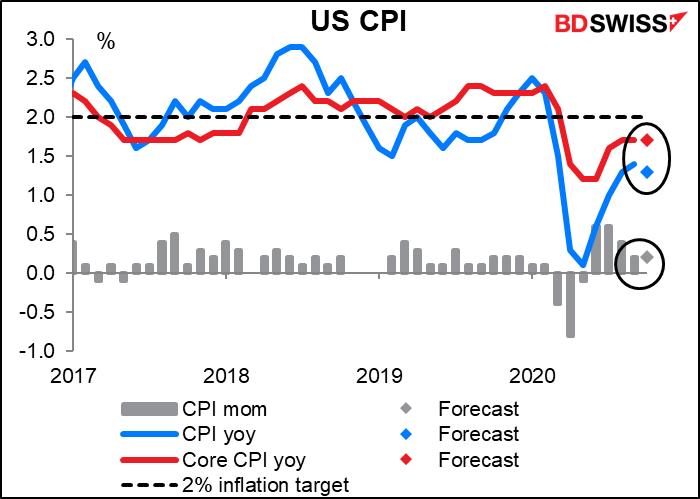 Instead, the jobless claims are now the big event of the week, as usual. And as usual, they’re not expected to be particularly encouraging. The market is looking for initial claims to fall by a mere 20k. Although that would be better than recent performance – the average over the previous four weeks has been an even more pathetic -4k – it still isn’t good. Figures like this are likely to confirm that the jobs picture isn’t improving that quickly and could therefore be “risk-off” = bad for stocks, good for the dollar. 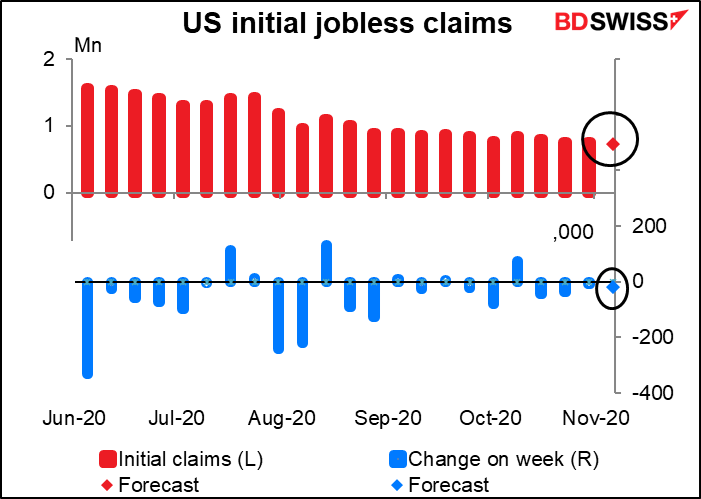 Continuing claims are expected to fall by 385k, less than half the -827k average for the last four weeks. That’s dismal, considering that a lot of people are probably rolling out of the figures as their state benefits expire. 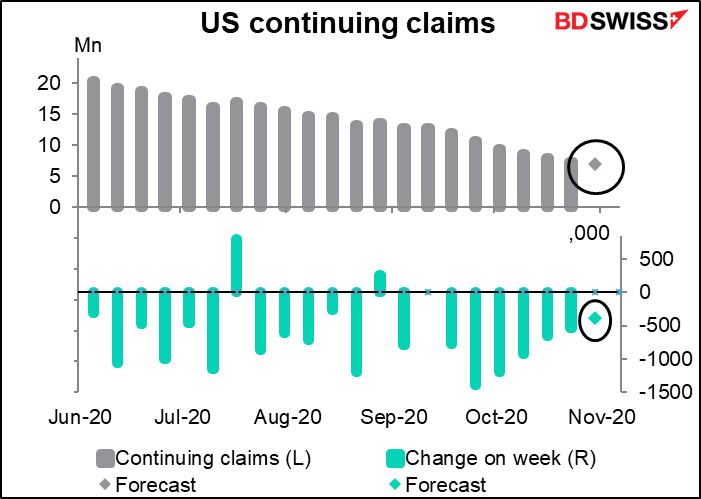 As I mentioned yesterday, we have the wrap-up session today for the European Central Bank (ECB) two-day online seminar, “Central banks in a shifting world.”  This used to be their annual symposium at Sintra, Portugal, the ECB’s equivalent to the Fed’s annual Jackson Hole symposium, but this year it’s being held virtually. The Big Event today is a one-hour policy panel this afternoon with ECB President Lagarde, Bank of England Gov. Bailey, and Fed Chair Powell.

The focus will be on what Powell has to say. Since his press conference just last week there have been three major developments:  Biden won the election, the pandemic got much worse, and an effective vaccine has appeared on the horizon. People will be listening closely to see if there’s any change in his thinking. As mentioned above, the market has already started to price in some tightening over the next three years despite the Fed’s pledge that it will allow inflation to overshoot its 2% target “for some time.” Does anyone expect inflation to be over 2% “for some time” during the next three years? I’m waiting to see if Powell pushes back against these expectations. That could be negative for the dollar today.

Then you can hear Bank of Canada Senior Deputy Gov. Wilkins’ swan song as she makes what will probably be her last speech before leaving the BoC next month. She was passed over for Governor earlier this year and it’s no surprise that she’s leaving. The last three Deputy Governors have not been appointed Governor when their boss left. The one before Wilkins did get the job eventually though – he’s the one who tipped out Wilkins for the job this time. Tiff Macklem left the BoC after he was passed over in 2010 in favor of Stephen Poloz. He probably beat out Wilkins this time because he had worked in the Department of Finance for several years. That experience will come in handy as the Bank buys up all the gazillion of bonds that the Department of Finance is printing up. We have to see where Wilkins reappears; with some private-sector experience or a senior post elsewhere in the government, she could be a strong candidate for the Governorship when Macklem’s term is up in 2027.

The US budget statement is expected to show a still extraordinarily wide deficit. The market estimate of -$272bn is more than double the average of the previous two Octobers (-$118bn). What impact this has on the dollar though depends on what the Treasury market thinks about it. If it’s perceived as showing a widening deficit, which it is, then it could send Treasury yields higher, which might be positive for the dollar. 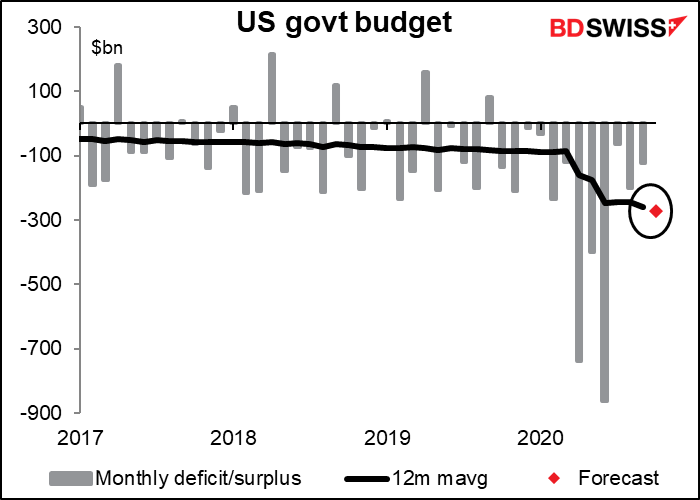 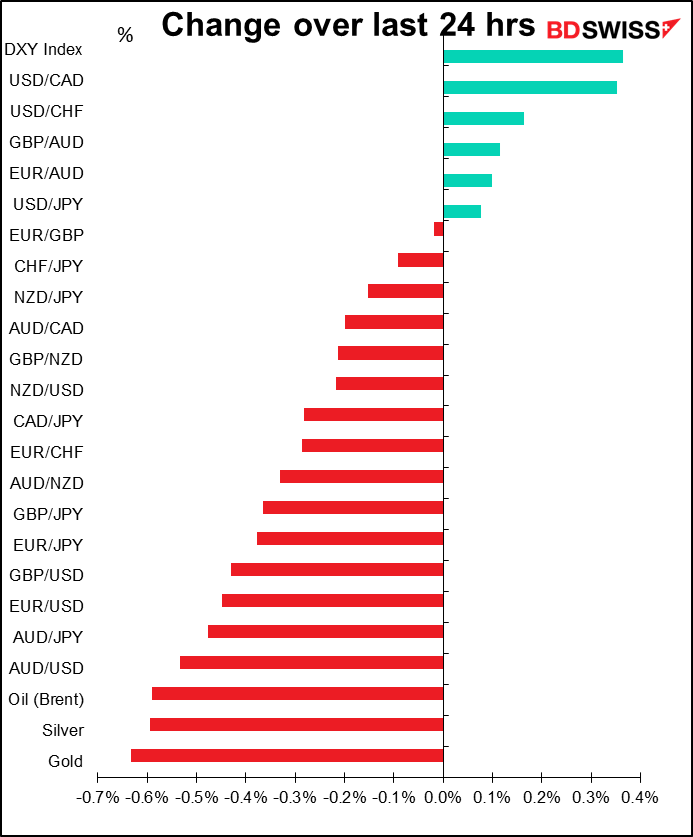