You are at:Home»MARKET PREVIEW»“Risk-off” as virus concerns dominate over vaccine hopes; quiet schedule until Monday morning 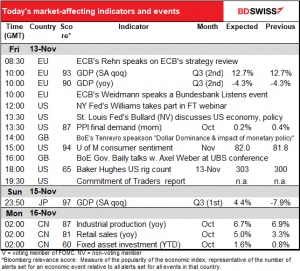 The NYT said a group of officials working with a Department of Homeland Security agency declared flatly that the election was the most secure in the nation’s history. At this point I don’t think there’s any more need to worry about Trump trying to pull off a coup. It is concerning though how many people he’s fired in the Department of Defense and the security agencies. It seems he’s determined to cause as much damage as possible to the US government before being dragged out of the Oval Office with his fingernails still digging in. But that has nothing to do with FX so I won’t go into it in detail, no matter how much it rankles me.

News flash: the White House is abandoning stimulus talks and leaving it up to Senate Majority Leader McConnell Y.S. to revive negotiations, according to press reports. Bet you didn’t even know they were thinking about it anymore. Me neither. I thought these talks were dead a long time ago. This hardly comes as a surprise as Trump hasn’t been seen in public for several days. Reports are that he just sits around calling friends and tweeting. President-Elect Biden has spoken of the “urgent need” for a bipartisan stimulus package, and Fed Chair Powell yesterday repeated his plea, but what do you think the Republicans are going to do: a) give money to poor people and ensure that the economy is in fairly good shape when the new Democratic President takes over, or b) allow the economy to tank just as the pandemic wrecks havoc throughout the country, thereby ensuring the most difficult imaginable beginning to the new administration? No prizes for guessing correctly.

Market Recap
A volatile market that is being driven by sentiment-of-the-day about the virus. One day hopes for a vaccine boost the market, the next day (like today) concerns about what’s going to happen to the global economy before the vaccine arrives cause the market to sell off. 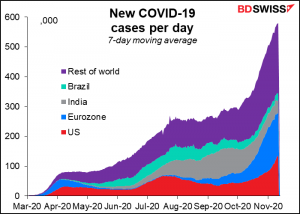 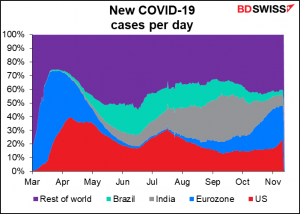 There was some cautious optimism –very cautious, as central bankers are wont to be — out of the European Central Bank’s annual Sintra conference, which took place virtually this year. Fed Chair Powell expressed some “medium-term” optimism about the vaccine, but noted that “significant challenges and uncertainties remain about timing production, distribution, and efficacy for different groups.” In the near term, “the next few months could be challenging” because of the continued spread of the disease, he said. An understatement, I’d say. ECB President Lagarde said, “I don’t want to be exuberant.”
As for monetary policy, Powell said he expects that the Fed “will need to do more, and Congress may need to do more as well on fiscal policy.” So thoughts that a vaccine might obviate the need for further easing in the US are premature, according to the Fed chief.

In this atmosphere of near-term risks, the safe-haven JPY and to a lesser degree the dollar benefited. The curious point was that yet again in a risk-off environment, EUR outperformed USD. This suggests to me that perhaps with ECB President Lagarde emphasizing “not only the level of financing conditions but the duration of policy support, too,” as she said on Wednesday, the market may be switching over to EUR as a funding currency. That could fundamentally change how EUR/USD behaves relative to risk.

GBP was the worst-performing currency but with no particular reason behind the decline that I could find. The disappointing data out at the start of the UK day left nary a blip in the charts, while there were no new revelations about the Brexit talks during the day. Maybe that’s the reason: no news is bad news, in this case. It seems that the current round of talks is likely to end today with little progress (a sentence that could’ve been written dozens if not hundreds of times over the last several years). EU officials insist the UK will have to move first while the UK insists Europe will. Maybe they should just do “scissors, paper, stone” and get it over with.

Although the two sides set a deadline of 15 November for an agreement, it now looks like the European Council teleconference next Thursday, 19 November, is the real crunch time for a draft Brexit deal. The real, last, final, not-to-be-extended, this-is-it date is the last week of November, in order to leave time for the various EU parliaments to ratify the deal by 1 January. The last EU parliament plenary session is scheduled for 1 December.

Anyhow it doesn’t really matter because they’re almost never revised anyway. Last time was no different for the preliminary figure even though the number was so much larger than usual: the advance figure was -12.1% and the preliminary was also -12.1%. The final figure was revised to -11.8%, though. An unusually large 30 bps change. A larger-than-normal revision is only to be expected when the figure itself is so much larger than usual.

This time, the question is whether we’ll see a revision at the preliminary stage or the final stage. Whichever. In either case, this figure is history now. Everyone’s worried about what Q4 will look like with the lockdowns all over Europe. 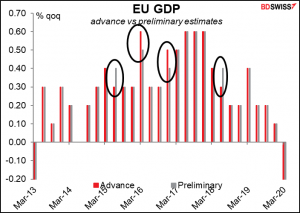 US producer prices have a high Bloomberg relevance score, but I’m not so sure that they’re relevant for the FX market. Nonetheless here’s a graph of them because it only takes me a minute to make a graph so I might as well do it That way you can see that on a yoy basis it’s not expected to change from the previous month. In short this indicator is forecast to be boring as well as irrelevant. 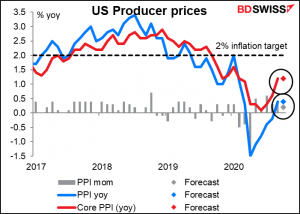 Speaking of boring, the U of Michigan consumer sentiment index is expected to be up a massive 0.2 point in November. The interviews for this preliminary release took place from 28 October to 10 November (i.e., Tuesday). That means many of the people will have been interviewed after the results of the election were known. And no change is expected? The interviews run to the 22nd, so that will certainly be the case when the final version is released on 25 November. Moreover the news about the Pfizer vaccine was released on the 9th. One might look at least for the final number to be revised upwards from this preliminary figure.

Then first thing Monday morning, while you’re still sleeping soundly, Japan comes out with its first estimate of Q3 GDP. It’s expected to be up a piddling 4.4% qoq, barely more than half the 7.9% qoq decline of the previous quarter. So Japan’s Q2 decline wasn’t as bad as most other countries’, but its Q3 rebound wasn’t as good, either. This may be the “rubber band” theory of economics, which says the deeper the fall, the bigger the rebound. But looking at the purchasing managers’ indices, which are both below 50, it appears that the Japanese economy continues to contract.

The market therefore expects Japan’s recovery to lag behind the US and the Eurozone somewhat. That probably won’t matter for the yen however as it’s being driven nowadays by risk sentiment, not by Japanese fundamentals. 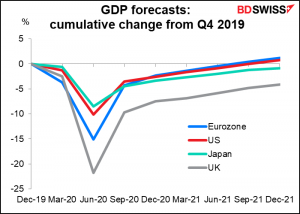 Shortly thereafter China announces its monthly trio of retail sales, industrial production and fixed-asset investment (FAI). Retail sales are expected to climb significantly as the country continues to heal from the COVID-19 shock earlier in the year. Growth in industrial production however is forecast to remain at about the same pace as in the previous month. That signifies a pretty complete recovery in IP. It’s about the same pace of growth as in January and February, before the big lockdown, and better than the 5.8% mom growth average last year. The figures are likely to confirm the “risk-on” mood in the market, particularly for the currencies that sell a lot to China (which usually means AUD, although with the political problems the two countries are having I’m not sure how well that’s going nowadays). 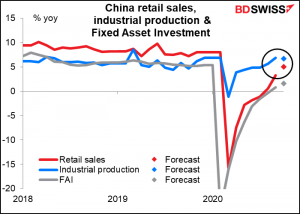 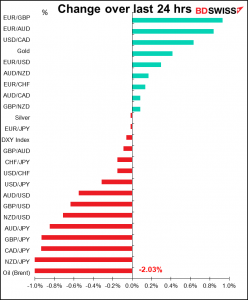