You are at:Home»MARKET PREVIEW»USD Up on further Fed Tightening Expectations; RBA meeting 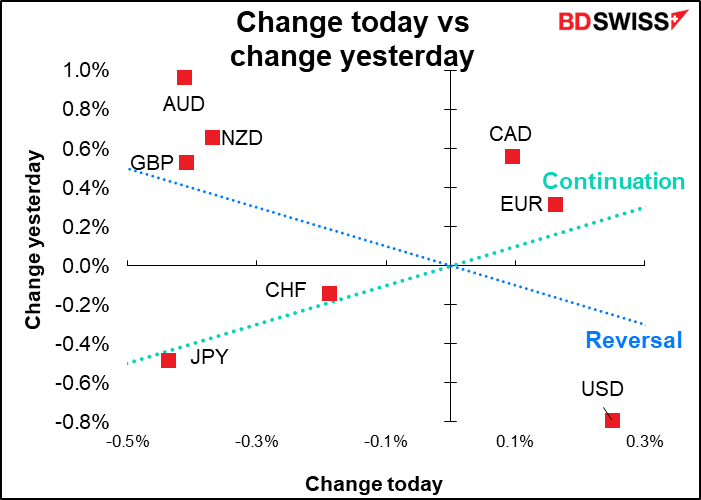 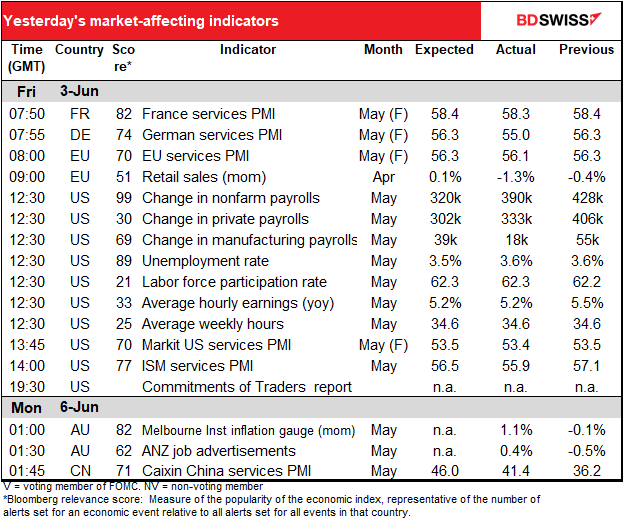 An unusual day in the FX market where USD is the #1 currency and EUR the #2, meanwhile JPY is the last on the list. Usually if USD is up then EUR isn’t up so much. Also, usually if JPY is last it means a “risk-on” environment but the S&P 500 was down 1.6% on Friday and stocks in Asia are mixed this morning. The S&P 500 futures are trading +0.5%.

Friday’s US nonfarm payrolls (NFP) data was good all around, a “Goldilocks” kind of report The headline jobs number beat estimates while average hourly earnings fell. The unemployment rate rose one tic but that went along with a higher participation rate as people got off their couches and returned to the labor force. There’s nothing in there to dissuade the Fed from continuing on its hiking path. In fact the employment situation is no longer a constraint on the Fed, they believe they’ve achieved “maximum employment” and so are focused largely on inflation. In that respect it was the average earnings figure that was key, because a rise in earnings can feed through to inflation if companies pass the additional costs onto their customers. A fall in the rate of growth of earnings was therefore a Good Thing, but 5.2% yoy is still well above the Fed’s 2% inflation target and therefore a threat to price stability.

Furthermore several Fed officials got in their last comments before the “purdah period” begins ahead of the June 15th FOMC meeting. Various FOMC members have come out in favor of 50 bps hikes at the June and July meeting while suggesting that they would pause and re-evaluation the situation at the September meeting. What we’re hearing now is that they want to have at least a 25 bps hike in September and maybe a 50 bps hike depending on how inflation evolves. They’d need some clear evidence that inflation is slowing down before they would consider slowing the pace of rate hikes. That keeps the focus squarely on the CPI.

As a result fed funds rate expectations rose further, which is likely why the dollar perked up. 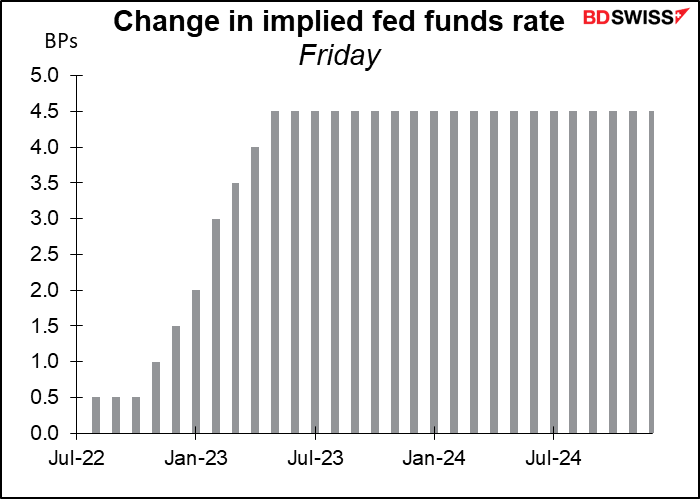 Speculators reduced their net long dollar position over the last week. The biggest move was in extending EUR longs. After that it was mostly cutting short positions: short JPY, short GBP, short CAD. 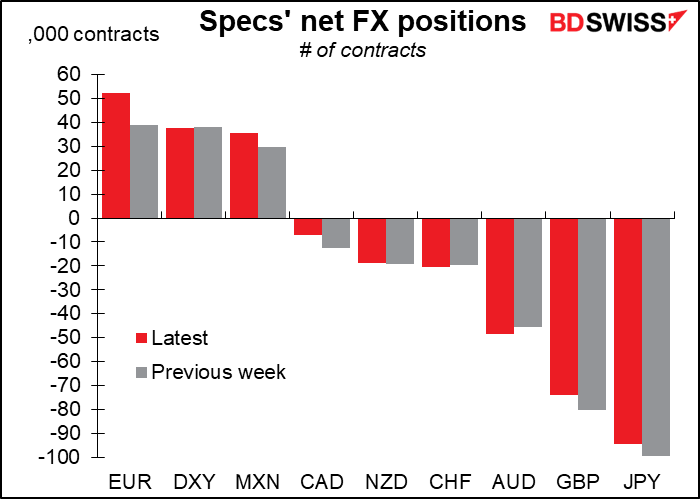 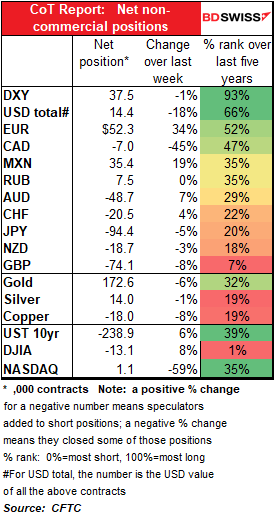 Not much on the schedule today as it’s a holiday in many countries (Whit Monday) from Andorra to Vienna. Since it’s a holiday in Switzerland we don’t even have the weekly Swiss sight deposits that normally provide me with 50-100 words on a Monday.

The first major item is a Reserve Bank of Australia (RBA) meeting overnight. I covered this in my Weekly Outlook so I’ll just summarize here what I said there. Basically everyone agrees that they’ll raise rates, the only debate is what RBA Gov. Lowe meant when he said they were returning to “business as usual.” Does that mean 25 bs hikes? Does it mean returning the cash rate to 25 bps intervals instead of the current rate of 0.35%? Most analysts are expecting a 40 bps move to 0.75%, which would completely unwind the emergency easing put in place after the pandemic started. But some are forecasting a 50 bps hike. Meanwhile, the futures market is discounting a 30 bps hike to 0.65%.

In any case, everyone agrees that the RBA is behind the curve as the cash rate is far below the inflation rate, making for deeply negative real interest rates – not what they need to calm inflation. The market response will depend on the size of the rate hike together with what they say about the future course of rate hikes. I think they may wind up surprising the markets with their hawkish approach, like the Reserve Bank of New Zealand did recently, which could be positive for AUD. 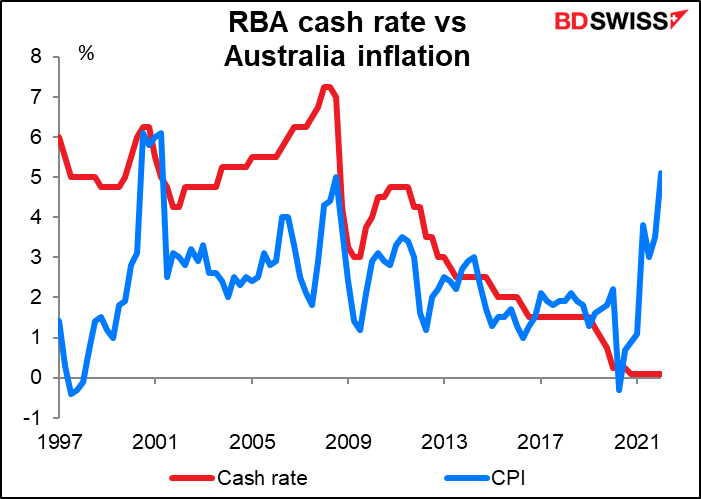 Then early tomorrow morning, German factory orders are expected to be up a slight 0.3% mom. That’s pretty bad considering that they fell month-on-month during the two previous months 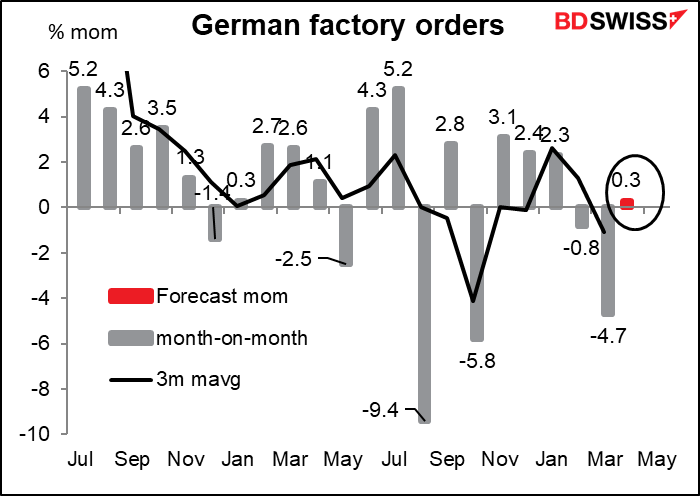 Both domestic and foreign orders are stagnating. 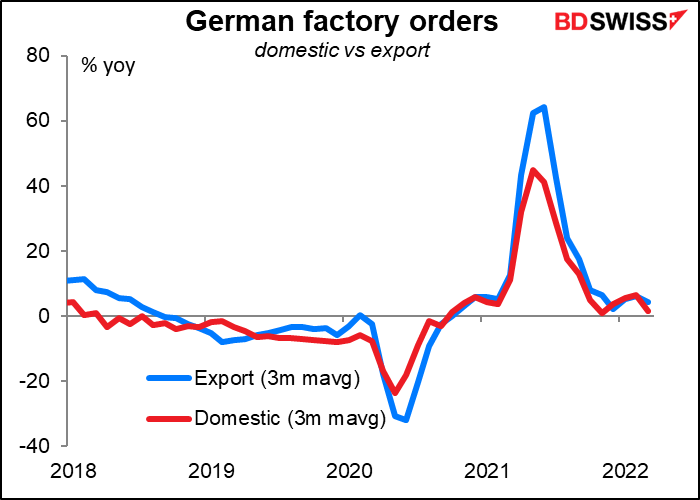 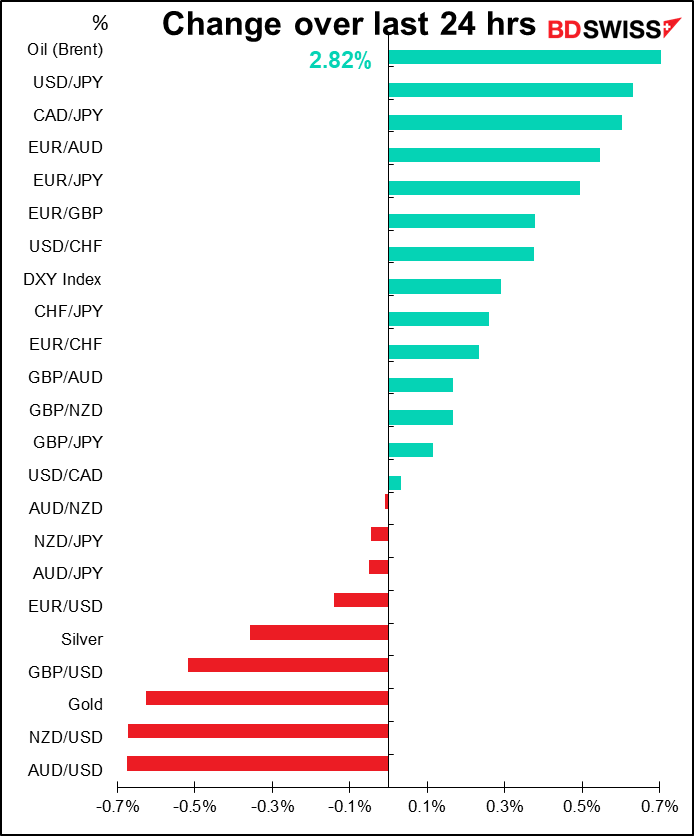