You are at:Home»MARKET PREVIEW»USD Up, JPY Down as US Data shows Strong Labor Market; NFP 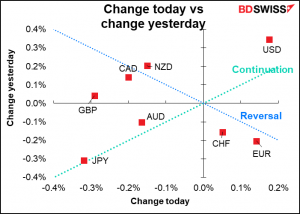 A generally “risk-on” day as US economic data showed the recovery continuing. Jobless claims came in better than expected, with initial claims falling by 51k, more than double the 27k decline that was expected. The US Institute of Supply Management (ISM) manufacturing purchasing managers’ index was roughly in line with expectations, coming in at 60.6 vs 60.9 expected. The strong economic data pushed US stocks higher for the seventh day in a row as investors continued to buy the reopening theme. Oil was up. Yet US bond yields fell slightly (10yr -1 bp).

It appears that fears about the virus disrupting the economy are fading again. In Europe, the Eurostoxx 600 travel & leisure index outperformed the overall market nicely yesterday, while in the US, airlines and hotels, restaurants, & leisure both outperformed too. What surprised me though was that in this context, the commodity currencies also lost ground. They should be the FX market’s equivalent of the airline industry, no? Especially CAD being down while oil was up 1.4%. (Canada was on holiday yesterday – maybe that has something to do with it.) AUD is performing particularly badly as the seventh city in the country went into lockdown. Nearly half the population – more than 12mn people – are under stay-at-home orders now, giving Australia one of the most stringent anti-virus regimes around.

They are acting out of an abundance of caution as there are fewer than 50 new cases a day out of a population of 25.4mn people, meaning that they have about 1.5 cases per million vs 41 cases/mn in the EU and 309 in the UK. I assume it’s the trend that’s worrying them, not the absolute number, and the trend is indeed worrisome. 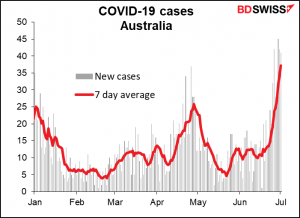 I would expect to see CAD and NZD recover today on the crosses, although whether they rise vs USD depends on the US nonfarm payrolls coming out later. Whether AUD recovers depends a lot on how soon they expect to lift the lockdowns (plus next week’s Reserve Bank of Australia meeting).

Speaking of oil, the OPEC+ talks broke down after the UAE blocked a preliminary deal that Saudi Arabia had worked out with Russia to increase production by 400k barrels a day (b/d) each month from August to December. That would allow the group to meet rising demand as economies gradually reopen and recover. The agreement would also have extended the duration of the broader OPEC+ accord to December 2022 from April.

The meeting will resume this afternoon after some diplomatic talks behind the scenes. If necessary it’ll continue through the weekend. Failure to reach an agreement would result in the current agreement remaining in place, which would continue the undersupply to the market and probably push oil prices – and CAD — higher. I expect though that they will reach an agreement – the UAE has been disruptive before but stuck in there. Maybe the Saudis will agree to give up a bit of production to the UAE. 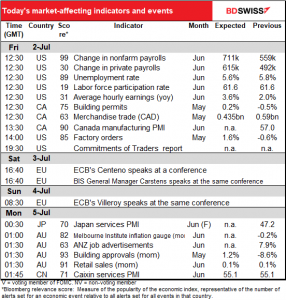 I explained in the usual excruciating detail in my Weekly Outlook why this figure is so important nowadays. It comes down to this: the Fed is tasked with achieving “the goals of maximum employment, stable prices, and moderate long-term interest rates.” It’s already achieved “stable prices” (defined as 2% inflation, more or less) indeed if anything prices are rising too quickly so they should in theory start tapering down their extraordinary policies. Before they can do that though they have to achieve “maximum employment.” So employment is now the deciding factor on whether they start reducing their extraordinary monetary stimulus.

The “market consensus” forecast is for a rise of 700k, although the Bloomberg “whisper” figure is slightly higher – 800. 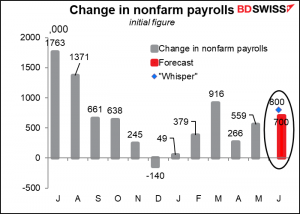 That may be because the ADP report beat estimates. 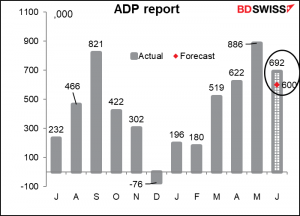 The ADP figure of 692k compares with the market consensus forecast of 615k for private payrolls alone. 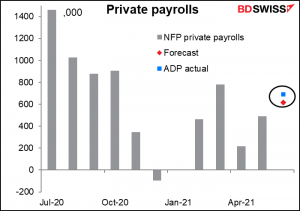 Of course, the ADP report is not that great a forecaster of the NFP’s private-payroll component, but it’s all we have. I was going to write “the best we have” but I would argue that something that’s not very good can’t be the best of anything, only the not-worst. (And in fact it’s not all we have; most economists use the employment components of the purchasing managers’ indices too, as well as some other indicators.) 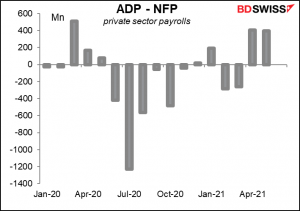 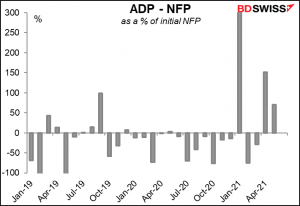 The unemployment rate and the participation rate are expected to improve somewhat, but not significantly. In fact, I think the participation rate is probably the most important figure of all of these, more even than the NFP number itself. That’s because Fed Chair Powell has talked about “our broad-based and inclusive maximum employment goal.” “Maximum employment” is no longer enough by itself; it has to be “broad-based and inclusive.” So the Fed will want to see not only a lower unemployment rate but also a higher – much higher – participation rate for minorities and lower-waged people. 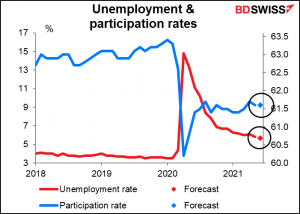 On the other hand, as St. Louis Fed President Bullard said in a recent article, “labor force participation has been trending downward since 2000. Relative to a simple trend line drawn from 2000 to the present, the labor force participation rate was above trend toward the end of the pre-pandemic expansion but is now back on trend, as shown in this FRED graph. During the pandemic, people who dropped out of the labor force include some workers close to retirement who may have decided to go ahead and retire. These workers—especially ones who benefited from increases in the stock market and housing wealth—may be less likely to come back into the labor market once the pandemic ends.”

How does the NFP usually affect the market? Hard to say. That’s because when you look at the movement of EUR/USD around NFP, on average there’s almost no movement at all. It does seem that with positive surprises, the dollar tends to appreciate at least for a day or two vs EUR> 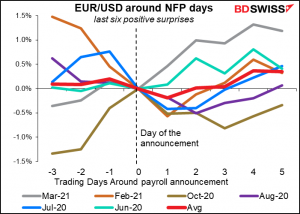 With negative surprises however there’s not discernable trend. That is, sometimes the dollar weakens but sometimes it strengthens, leaving us with no reliable pattern at all. Canadian building permits and international trade come out at the same time as the NFP does, but no one is going to really care very much, will they? Any impact on USD/CAD will be largely swamped by the impact of the NFP.

Normally Canada announces its employment data at the same time as the US, but not this week. That sometimes does affect USD/CAD independently of the NFP. 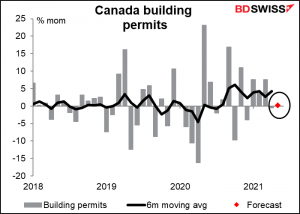 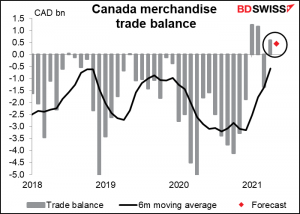 Same with US factory orders. They’re largely a function of durable goods orders anyway. I don’t think on an NFP day they’ll get that much attention. 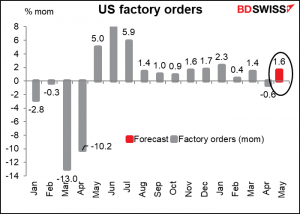