You are at:Home»MARKET PREVIEW»USD Up, EUR Down despite Good EU PMIs; Brainard Speech on CBDCs

Is the European recovery already priced in? Most of Friday’s preliminary purchasing managers’ indices (PMIs) beat expectations handily, except for German manufacturing, which at 64.0 is pretty strong, nonetheless. The leaps in Eurozone and US service-sector PMIs were particularly notable – as was the dismal underperformance of Japan, which is likely to weigh on the yen going forward. 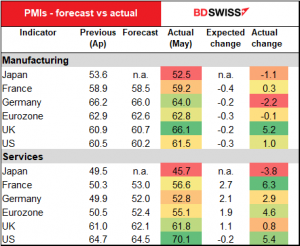 Yet the much-improved Eurozone PMIs weren’t enough to support the euro. This suggests that the recovery of the Eurozone economies as lockdown restrictions are lifted may already be priced in. 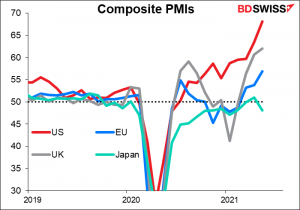 Similarly, the UK had a massive beat on the manufacturing PMI and only a small miss on the service-sector PMI, which in any case was already high and moved even higher. Plus, UK retail sales beat estimates too. Yet GBP was generally lower as well.

CAD was the outperformer on a day when the dollar rose against most everything. A sharp rise in oil prices combined with a better-than-expected retail sales figure (+4.3% mom ex autos vs +2.3% mom expected) The preliminary retail sales data for April showed a downturn, but that’s only to be expected as there was a stay-at-home order in Ontario for much of the month.

Oil was up as the US and other Western countries continue to make progress on the virus front, suggesting stronger demand to come in the future as people start traveling and moving around again. 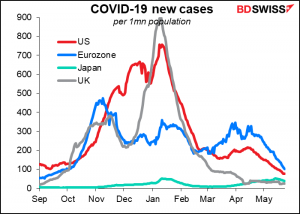 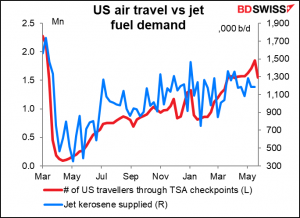 AUD on the other hand was under pressure from falling iron ore prices. The Chinese government Sunday warned companies in the iron ore, steel, copper, and aluminum businesses that excessive speculation was a reason for the recent surge in commodity prices and said that the government will severely punish people trying to corner the market, speculating (whatever that is), hoarding, spreading fake information, etc. In other words, they are trying to jawbone the market lower. It will certainly work in the short term (as it did today), but can government pressure reverse market fundamentals over the longer term? I’m not so sure. I think the rise in iron ore prices is fundamentally due to a rise in demand due to the reopening of the global economy and that will inexorably result in higher prices – and a higher AUD — eventually. 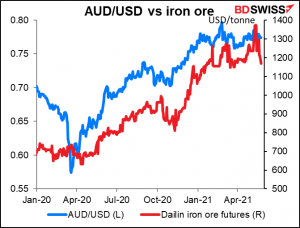 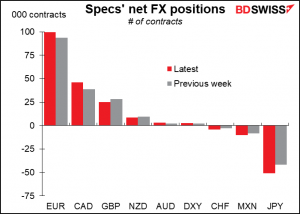 The economic picture in Japan is quite different from that of most other major industrial countries: the disappointing Q1 GDP figure, continued deflation, and a fall in the May purchasing managers’ indices (not all of which were known before last Tuesday, when the CoT figures are recorded) show that once again, Japan is an outlier in the global economy. 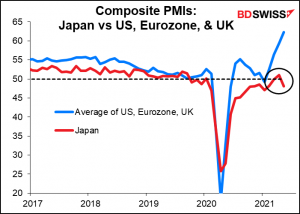 While EUR is the largest spec position by amount, CAD shows more conviction – the longs are a greater percentage of total open interest Sentiment for CAD is perhaps boosted by the government’s plans for a staged reopening beginning mid-June.

Today’s CAD long (22%) is beginning to look similar to the Jan 2018 (24%) and Nov 2019 (28%) highs, although still a long way off the 43% in Oct 2017. Broad USD positioning by non-commercial investors was unchanged week on week. WTI long positioning dropped to the lowest as a share of open interest in more than a year, after significant progress was reported in Iran talks.

There seems to be plenty of room for CAD longs to go longer, though. 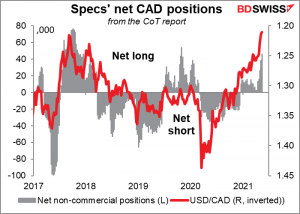 Hedge funds were active sellers of JPY & GBP and buyers of CAD & AUD. They’re now short CHF after being significantly long just a month ago. 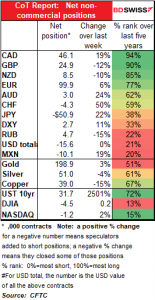 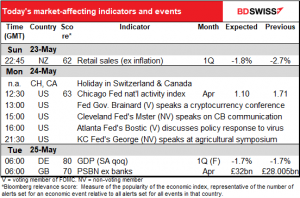 Not much on the schedule for today. It’s a holiday in Switzerland so we don’t even get the weekly Swiss sight deposits.

The Chicago Fed national activity index is a second-tier index that’s kind of behind the times (today’s covers April whereas last week we already got the Empire State, Philly Fed, and preliminary purchasing managers’ indices for May). The CFNAI uses many previously released indicators to gauge overall economic activity and related inflationary pressure on a national basis, not regional. A positive number corresponds to growth above trend and a negative number, below trend. However, it’s difficult to interpret any one number, because the figures are so volatile. In any case, it’s expected to confirm the recent story of US growth continuing at a healthy pace. 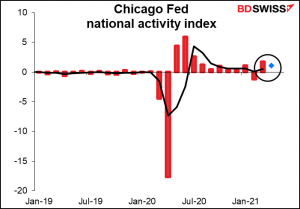 There are several Fed speakers. Last week, Philadelphia Fed President Harker (NV) added his two cents to the tapering debate, saying the Fed should get a conversation going on tapering its bond purchases “sooner rather than later.” So far Harker, Dallas Fed President Kaplan, and Boston Fed President Rosengren have come out on that side of the argument. It’ll be interesting to see which side the three regional Fed presidents speaking today are on. Mester and Bostic have spoken recently and pretty much echoed Fed Chair Powell’s line that it’s too early. We’ll be waiting to hear what Kansas City President George, who’s known as one of the more hawkish FOMC members, has to say.

For those interested in cryptocurrencies, you might want to tune in to today’s speech by Fed Gov. Lael Brainard at the Consensus 2021 cryptocurrency conference. She seems to be the point person for digital currencies on the FOMC. (The conference runs from Monday to Thursday. Former Treasury Secretary Lawrence Summers, hedge fund manager Ray Dalio, and rock star investment manager Cathy Wood will also be speaking.) Gov. Brainard’s last speech on the topic, “An Update on Digital Currencies,” was August 2020, so it’s high time for an update on the update. Perhaps she’ll give us some clues on where the Fed stands with regards to central bank digital currencies. Her speech will probably be available on the Fed’s website.

Tomorrow morning, we get the final revision of Germany’s Q1 GDP, which is rarely if ever revised significantly so don’t worry about it.

And Britain’s budget deficit, fondly known as the Public Sector Net Borrowing, excluding public sector banks (the government had to take over a couple of banks in 2008, which distorts the figures, so they exclude them). This doesn’t have much connection with the FX market during normal times. It isn’t affecting the gilts market very much either, because the Bank of England is hoovering up so many of the bonds anyway. Now it’s just a way of tracking Britain’s fiscal stimulus. 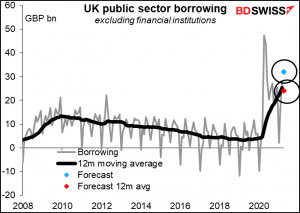