You are at:Home»MARKET PREVIEW»USD Up, Commodity Currencies down as US PPI beats estimates; Japan GDP 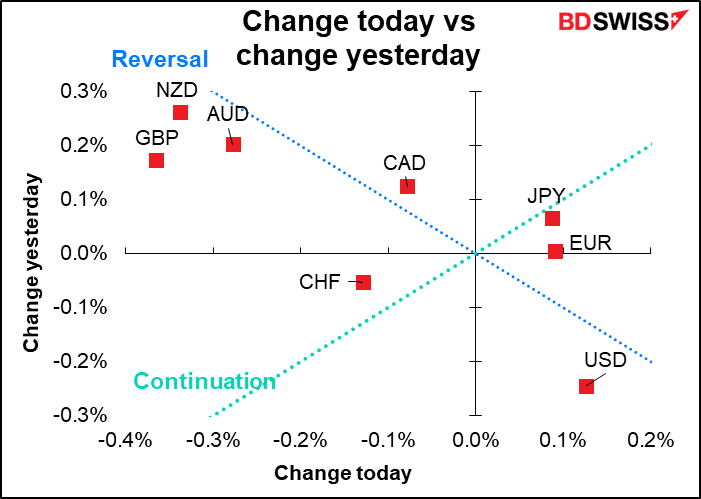 The second graph above tells the story nicely: by and large it was a reversal day in the FX market as the commodity currencies and GBP retreated while the dollar gained. On the continuation side, JPY continued to gain while CHF continued to fall.

The S&P 500 managed to close at a record high for the third day in a row. 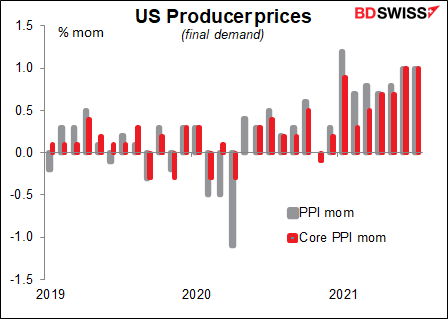 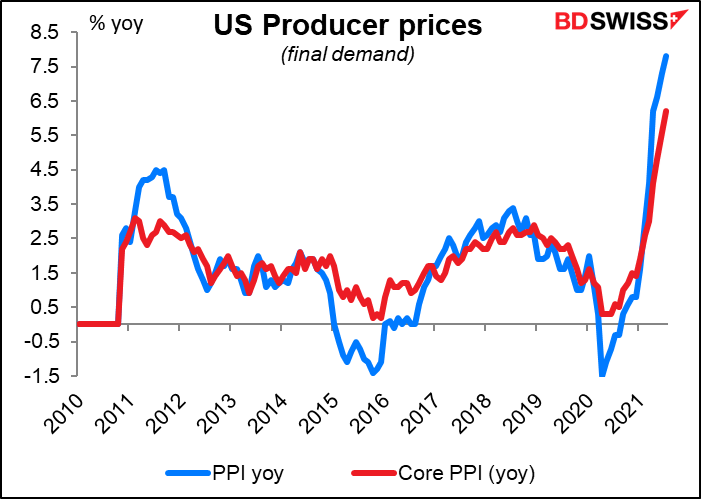 The relationship between the CPI and the PPI is complicated and by no means fixed (as I discuss in more detail than you can bear reading about in my report, The PPI and the CPI: what’s the connection?) Nonetheless, the automatic response among traders to a figure like that is going to be “higher inflation” and 10-year breakeven inflation rates rose 1.5 bps to a 10-week high. As a result, the fed funds futures unwound a lot of Wednesday’s move. 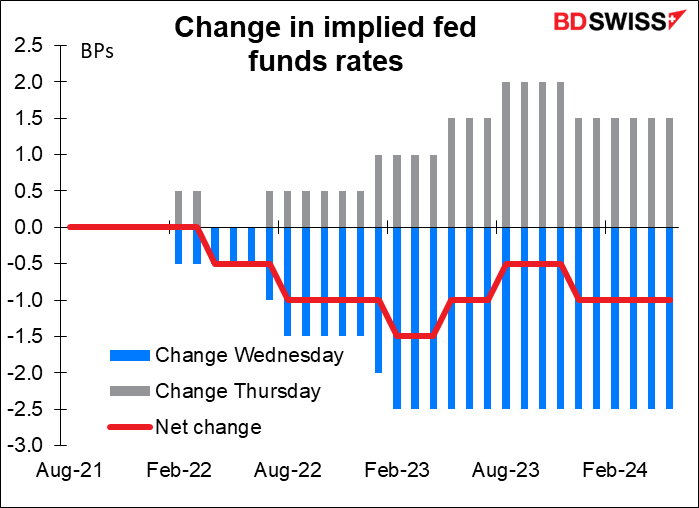 AUD and NZD were hurt by news of a snap 7-day lockdown in Canberra. The Australian Capital Territory will be put into its first lockdown in over a year. The news sent both AUD and NZD bond yields lower, depressing interest in the currencies.

We could be in for some serious divergence among the commodity currencies. On the one hand, the International Energy Agency (IEA) cut its outlook for oil consumption for the rest of the year due to the virus situation and predicted there could be a surplus of oil in 2022 if OPEC+ continues to undo their production cuts. That’s negative for CAD. On the other hand, the US Dept of Agriculture’s monthly World Agricultural Supply and Demand Estimates (WASDE) predicted declining grain supplies as drought and heat waves plague the western US. Higher agricultural prices should be positive for NZD, which mostly exports agricultural products. 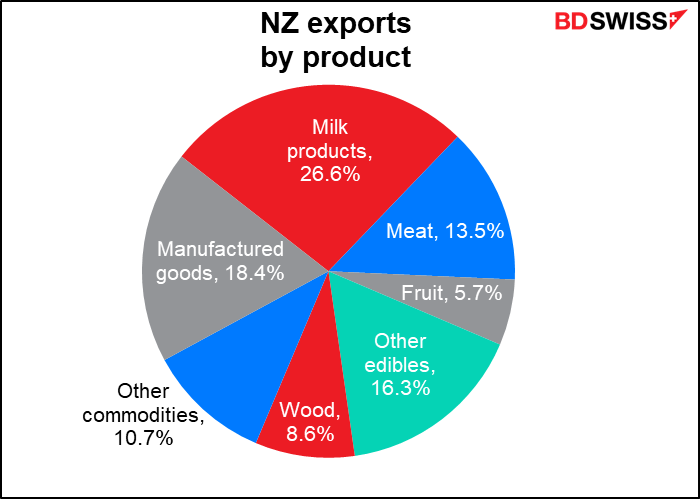 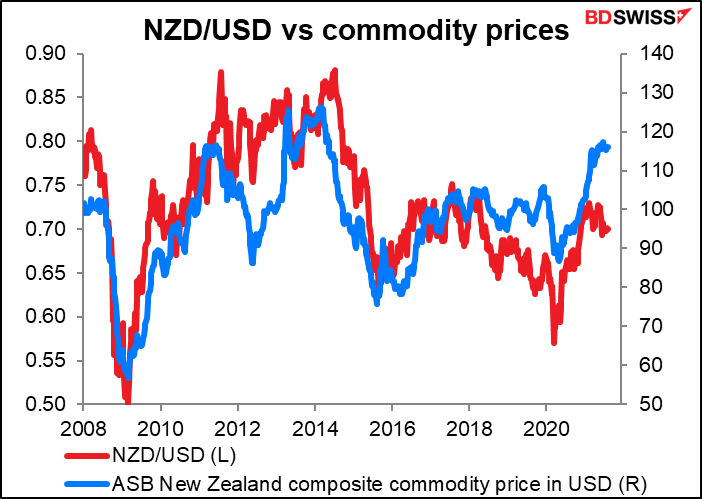 AUD may be caught in the middle as a country dependent on exports to China, which is slowing down and also trying to depress the prices of commodities that it imports. There’s now a noticeable divergence opening up between AUD/USD and the price of industrial metals, which usually track each other fairly closely. 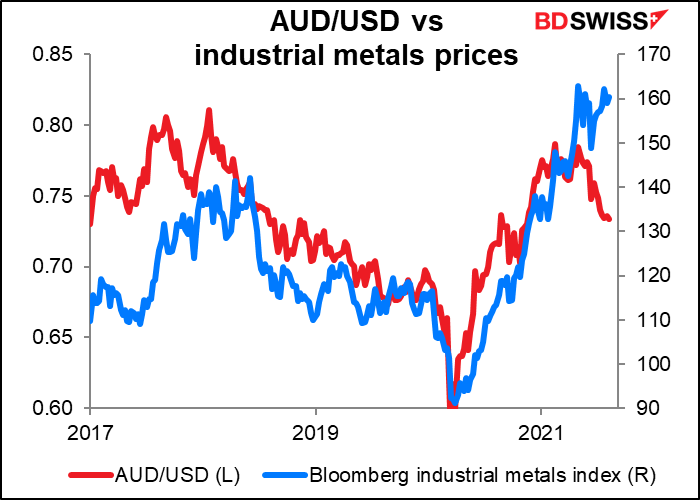 It was 50 years ago today that Nixon met at Camp David with Fed Chair Arthur Burns, incoming Treasury Secretary John Connally, and then Undersecretary for International Monetary Affairs (and future Fed Chair) Paul Volcker and decided to close the gold window, thus ending the Bretton Woods system of exchange rate management. He went on TV on Sunday while financial markets were closed and announced that “I have directed Secretary Connally to suspend temporarily the convertibility of the dollar into gold or other reserve assets, except in amounts and conditions determined to be in the interest of monetary stability and in the best interests of the United States.” That “temporary” action has proved to be quite long-lasting!

I have to say, I owe my career to this event, so I’m quite grateful that he did it. 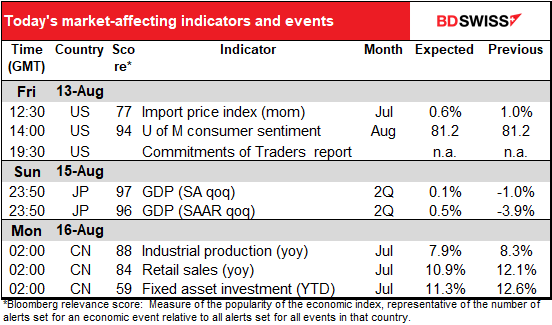 The quiet end to a quiet week.

The only major thing on the schedule today is the University of Michigan consumer sentiment index. It’s expected to be unchanged, which would be a surprise. The index has been published 523 times since it started in 1978 and has only been unchanged four times. If we widen it out to ±0.1 point, still it’s only 9 times.  ±0.2, 14 times. Etc etc. So you see, small changes are unlikely. Not impossible, but unlikely. Meanwhile, the expectations index is expected to decline by 1.5 points. 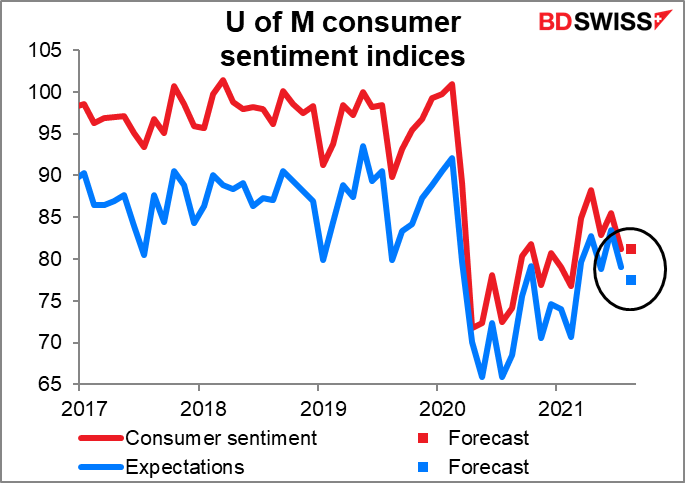 The market will also be waiting to see what the one-year inflation forecast is. The market is looking for a 10 bps decline to a still-high 4.6%. 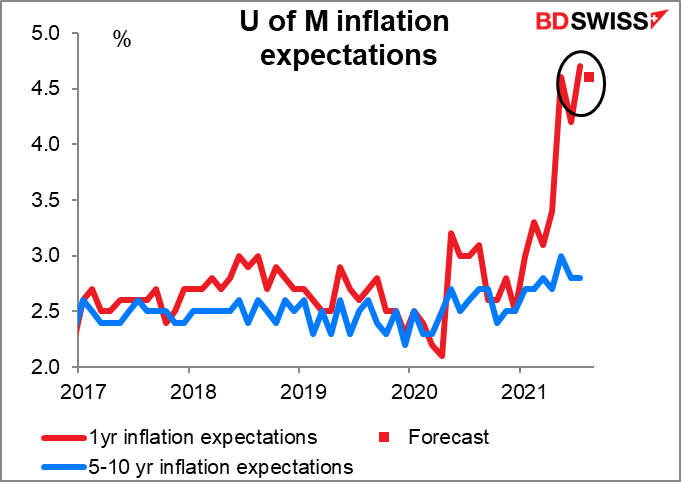 Then we can relax and trade the technicals while waiting for the weekend.

For those of you in Asia or those with big JPY positions, Monday morning Tokyo time Japan announces its Q2 GDP. It’s forecast to be a miserable +0.1% qoq. This compares with +2.0% for the Eurozone, +1.6% for the US, and +4.8% for the UK. No wonder PM Suga’s popularity is plunging despite the successful Olympics (or maybe because of them?) 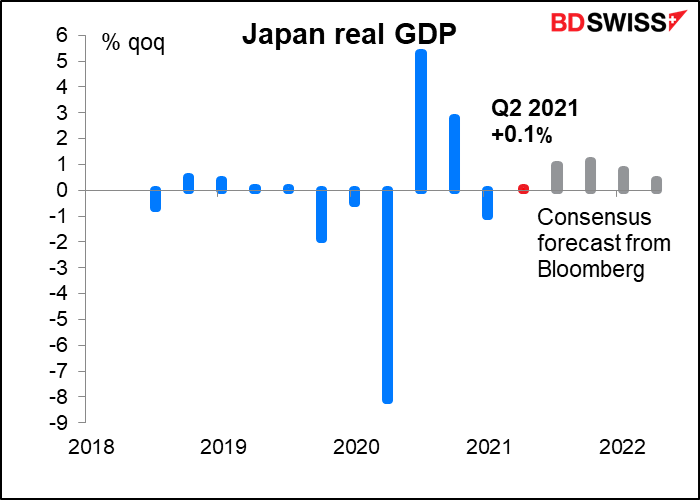 Then comes China’s monthly trio of retail sales, industrial production, and fixed asset investment. It’s hard to figure out what’s going on with them though because only yoy rates of change are available, and of course those are bound to slow as we get further away from the first anniversary of the severe Feb. 2020 lockdown in China. We’ll have to wait until we get to the first anniversary of something approaching normality. That might not be until next year. 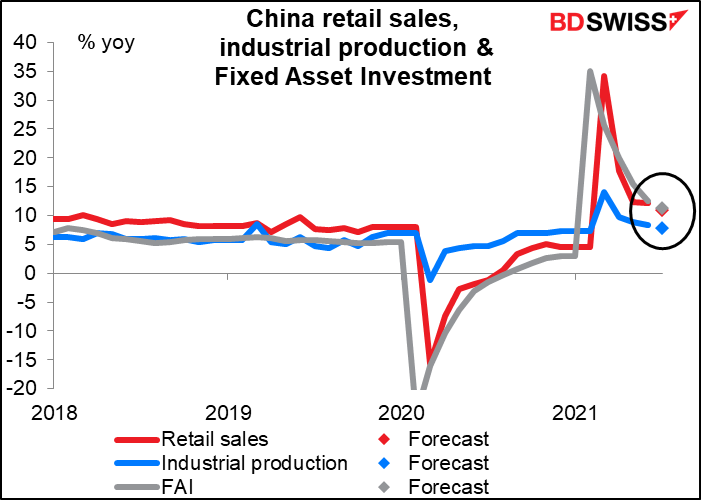 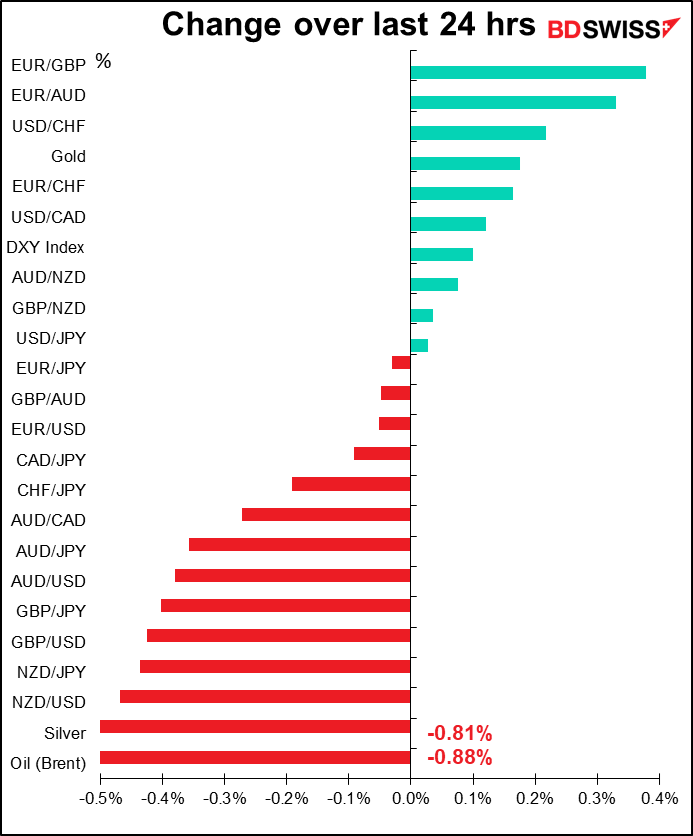