You are at:Home»MARKET PREVIEW»USD Up, CAD Down in Quiet Holiday Trading; JOLTS, U of M 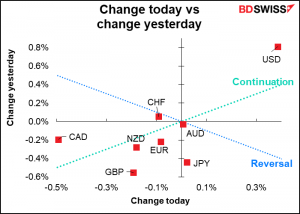 It was a relatively quiet day yesterday with several markets closed for Veteran’s Day. The only two currencies that had changes worth talking about were ones that had holidays yesterday.

USD continued to rally as the market further digested the shocking October consumer price index (CPI) from Wednesday. Although the US bond market was closed yesterday, European bonds continued to sell off modestly, with yields on 10-year German Bunds rising 1.7 bps and French OATS up 1.4 bps. Trading in Treasuries resumed this morning with yields following their European counterparts higher.

Notice how inflation expectations have risen more in the UK than in the US while Europe has kept pace with the US. Nonetheless the UK and Eurozone economies are much weaker than the US is (see graph below showing the expected path of GDP) and so the US can probably afford to tighten interest rates faster & higher than the UK and Eurozone, never mind Japan. This suggests real interest rates in the UK and Europe are likely to lag behind those in the US, leading to USD strength. 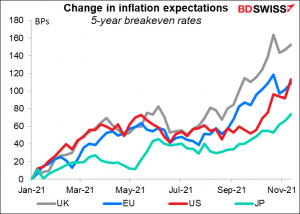 CAD’s decline was not solely a function of oil. Although oil was lower, the two diverged early on. Hard to say what was behind this as there was no news out of Canada. 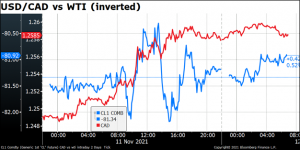 My guess is that it’s just a catch-up from Tuesday, when USD/CAD didn’t match the move in oil. Or perhaps someone had to transact some business in the loonie in a thin market.

GBP held up relatively well despite a disappointing Q3 GDP reading of +1.3% qoq (vs +1.5% expected). This was a marked slowdown from +5.5 % qoq in Q2 even though the lockdown restrictions were much looser in Q3 than in Q2. The September reading of +0.6% mom was relatively healthy (+0.4% mom expected) but July and August were revised down. 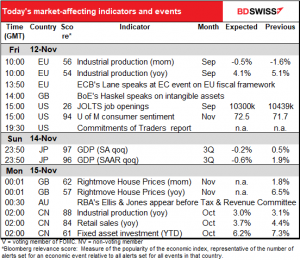 This morning’s EU industrial production is expected to show the region’s industrial production falling some 1.7% below its pre-pandemic level, but that’s about par for the course. It’s being dragged down by Germany, which was 9.1% below. The US is 1.2% below and Japan the previous month was 4.3% below, so the EU isn’t doing too badly. I don’t think this will affect EUR unless it’s wildly different from expectations. 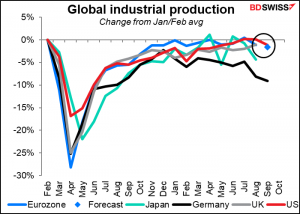 The US Job Offers and Labor Turnover Survey (JOLTS) program is forecast to show only a small decline in job openings, -139k from the previous month to be exact. That’s still quite a healthy number of jobs. There’s no forecast for the quit rate, which was at a record high of 2.9% the previous month (meaning 2.9% of the people with jobs voluntarily quit their job during the month – a sign either of confidence that they can get a new job or that they’re really, really fed up with what they’re doing. Both of these series indicate quite a healthy job market. 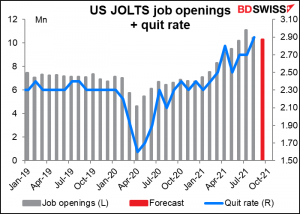 Since the decline in the number of jobs is expected to be much less than the 710k decline in the number of unemployed persons during the month, the job-openings-to unemployed-persons ratio is forecast to hit a record high of 1.34. Many observers take this ratio as an indication of how tight the labor market is. The figure could spur thoughts that we are already at the fabled “maximum employment” that the Fed is aiming for and the Fed might therefore accelerate tapering down its bond purchases and start “lift-off” in rates earlier than expected. That would be positive for the dollar. 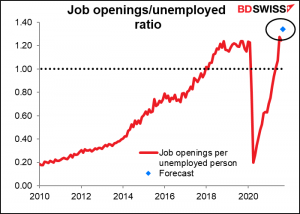 At the same time, the U of Michigan announces its consumer sentiment index. It plunged recently and is expected to recover only a little bit. 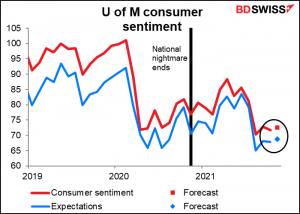 The low level of consumer sentiment is perplexing, because other data suggests it really shouldn’t be that way. A regression analysis of the U of M index against the S&P 500 and US unemployment rate from 2005 to 2017 showed a good fit, with both variables highly statistically significant. The relationship remained pretty much intact during the initial stage of the pandemic, with the regression fitting the decline in sentiment almost exactly. However consumer sentiment has failed to recover even though the past relationship with stocks & employment means that it should have come roaring back by now. Clearly something has changed. The virus is the most likely culprit in my view, although the poor rating for President Biden (totally unwarranted, in my view, and no doubt a result of relentless propaganda by right-wing TV) may also have a hand. 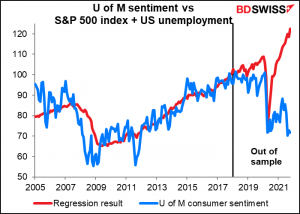 Early Monday (Sunday night GMT time) Japan announces its Q3 GDP. It’s expected to show a contraction in activity, no doubt due to the continued “state of emergencies” there. It should improve going forward though as the vaccination program may have gotten off to a late start but it’s proceeded quite well (73% of the population is vaccinated, slightly above the 70% median for developed countries) and therefore the “emergencies,” never that onerous to begin with, have been lifted. 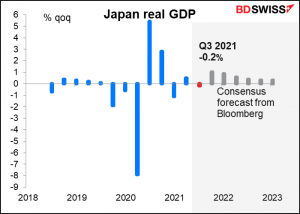 Japan’s recovery is sluggish, but no more sluggish than Britain’s, which isn’t saying very much I admit. 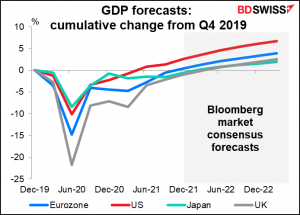 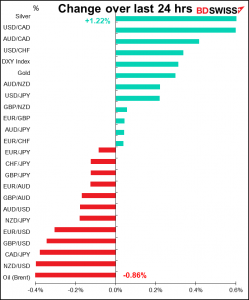