You are at:Home»MARKET PREVIEW»USD, Stocks Rise on Nothing in Particular ; Initial Jobless Claims, ISM Services 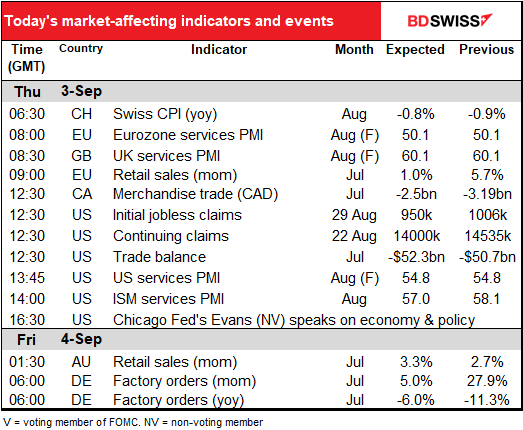 It’s quite unusual nowadays to run my spreadsheet with the rates on it in the morning and find USD coming out on top (see the graph at the bottom of this report, where the DXY index is the top item). Although on a trade-weighted basis CHF gained even more, that’s just because EUR fell so much, not because CHF gained. In fact USD rose vs CHF, a big win for me as my wife and one daughter live in Switzerland.

Does this one-day gain disprove the “dollar is falling” thesis? Not at all. Currencies move in long-term trends. Within those trends, reversals are common. It looks like we are in a long-term downtrend for the US currency that began in Jan 2017, when EUR/USD bottomed out around 1.04. It would be strange if it continued unabated day after day without any reversals.

Of course, it could be that we are still in the USD uptrend that started in April 2008, when EUR/USD hit 1.60. We’ll have to wait a few years to see which it is. As is commonly said, life has to be lived looking forward but is understood looking backward. 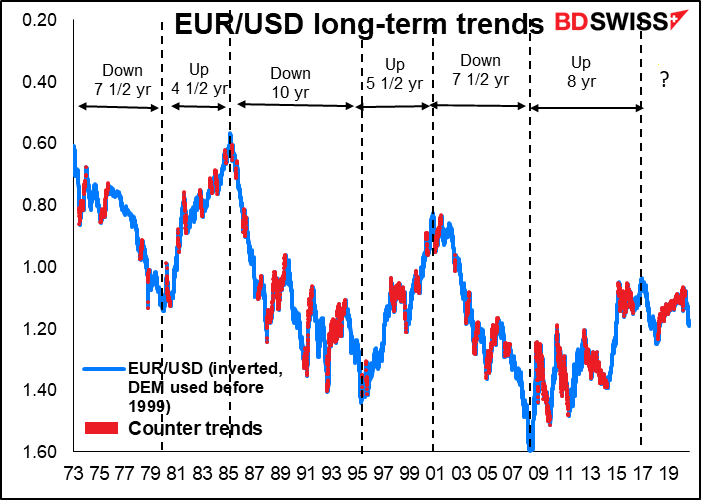 EUR got a brief lift when the ADP report came out much lower than expected — +428k jobs instead of +1000k as expected, but the gain didn’t last long. As I mentioned before, the ADP report is no guide to the nonfarm payrolls even under normal circumstances, and now isn’t normal, so it’s an even worse guide. Last month it missed by around 90%.

The interesting point to me was the continued rally on Wall Street, with the S&P 500 and NASDAQ indices moving further into record territory. It would be futile for me to try to explain why stocks are going up, particularly on a day when the biggest economic statistic missed estimates by so much. “It is what it is,” as someone famously said recently.

I wonder though how much of the US stock market rally is “vaccine optimism” after the US Centers for Disease Control and Prevention (CDC) told US states to prepare for a Covid-19 vaccine by 1 November. Isn’t that convenient? A vaccine available right before the election on 3 November?

News like that also makes me question the recent downtrend in  US virus cases. Is it just a coincidence that the number of new cases in the US started to turn down only days after responsibility for collecting and reporting the data was taken away from the CDC and given to the US Dept of Health and Human Services, run by Trump myrmidon and former pharmaceutical lobbyist Alex Azar? 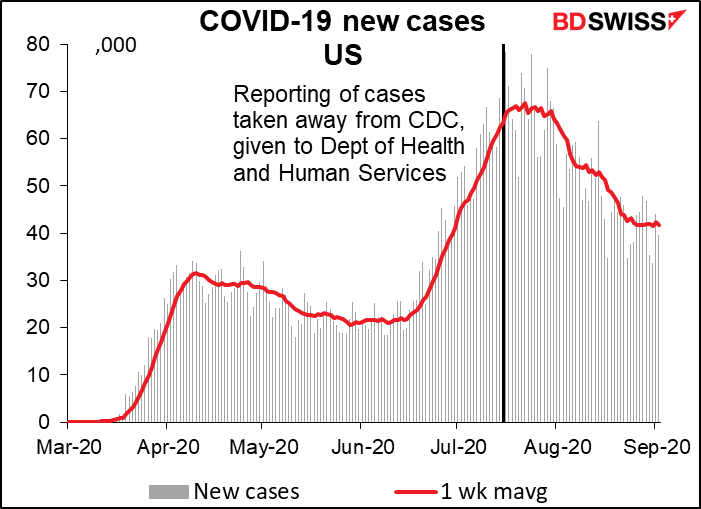 Unfortunately, the CDC seems to be getting less and less reliable too as it comes more fully under the control of the administration. For example, it recently announced that people who were exposed to the virus but are asymptomatic don’t need to be tested. At least 33 states have rejected that advice, an unprecedented rejection of the credibility of what should be the most authoritative health advisor in the US. .And now that responsibility for reporting the virus data is being given back to the CDC – apparently the Health and Human Services Dept couldn’t handle the job – can we believe them? It seems to me that the CDC is increasingly a tool of the Trump regime’s propaganda and reelection machine, not a scientific agency aiming at best practice for the nation’s health.  I’m sorry to say that I simply don’t trust the US government under Trump to tell us the truth. There are too many signs that the bureaucracy has been politicized.

Getting back to economics, several senior Bank of England officials spoke yesterday. There wasn’t that much new or different from what they said following their 6 August meeting. BoE Gov. Bailey said the Bank expects the UK to lose 1.5% of GDP over the long term due to economic scarring from the pandemic; Deputy Gov.  Ramsden said it would be even more. They all emphasized that there was still more the Bank could do.  GBP fell vs the stronger USD but despite the dovish comments it strengthened vs the weak EUR.

The BoE’s comments are in contrast to comments coming out from the Fed recently, which focus on fiscal policy, not monetary. Contrary to what Gov. Bailey said, NY Fed President Williams yesterday cautioned that there is a risk that the market thinks the Fed can do more than it can. While the FOMC has changed its framework for monetary policy, the new framework doesn’t come with any specifics about what they will do to implement those changes. For example, when asked about the Fed’s policy towards the weighted average maturity of its portfolio, Williams brushed off the question, saying “it’s a broader question about how we will evolve our broader tools as we move forward. These are decisions we haven’t made yet.” Rather, the Fed seems to be pinning its hopes more on fiscal policy, as Cleveland Fed President Mester called for yesterday.

If the Fed is on hold while waiting for the government to take further action, but Congress proves incapable of reaching any agreement, then the US will be in a difficult position. On the one hand, monetary policy won’t get any looser, which should in theory boost the dollar, especially if other countries are loosening policy further (watch next week’s ECB meeting, for example). On the other hand, it probably would mean a slide back into recession as the millions of people on unemployment lose their income. I think right now the markets are focusing on growth and the pace of recovery, which means that this potential mix of policy in the US (or lack of policy, to be more accurate) would tend to be negative for the dollar.

(Sidenote:  if the Fed wants to learn some lessons on communicating its policy to the markets, I suggest they take a look at how the Bank of Jamaica (the other BoJ) does it. They win the prize, hands down.)

We start off with the revised EU and UK service-sector purchasing managers’ indices (PMIs). The UK is already well into expansionary territory, so the focus will be on the Eurozone, balanced precariously as it is on the line between contraction and expansion. Which way will it tip? Tune in and find out!

EU retail sales normally aren’t a biggie, with a Bloomberg score of only 53, but nowadays people are focusing more on what’s happening at the retail level and so I’m covering this for now. Last month, sales were already 0.5% above the January/February average. Based on the expected mom change, they’re forecast to be 1.5% higher in July. This is a pretty solid and could help to firm up EUR. 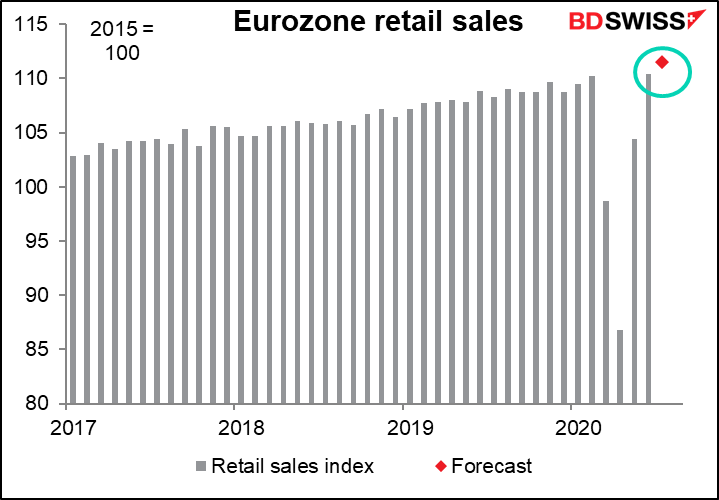 Canada’s merchandise trade balance should improve (i.e., the deficit narrow) in July as motor vehicle exports increase. The record-high prices for US lumber futures also suggest strong Canadian exports. Both of these factors stem in part at least from the same trend:  people in the US moving out of cities to the suburbs, where they now need a car. CAD could be one of the roundabout beneficiaries of this trend. 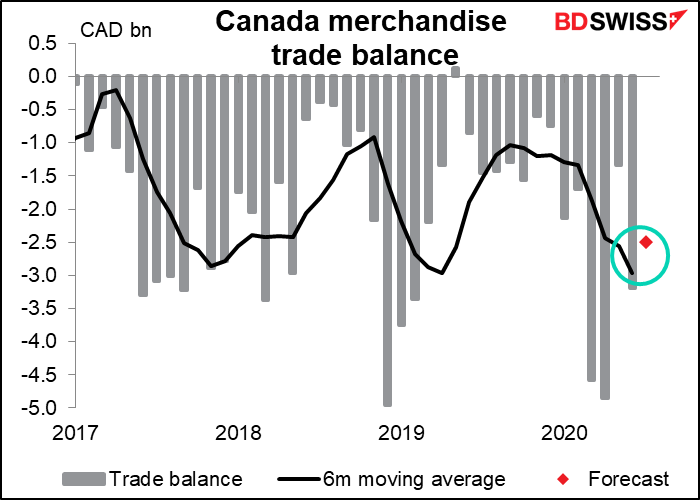 US jobless claims are forecast to continue their decline, albeit modestly. Initial claims are expected to fall back below 1mn, but still that would only be a decline of 56k, hardly anything to get excited about. Continuing claims on the other hand are forecast to fall at an accelerating pace, down 535k on the week. That’s moderately good news in that it shows even if a million people a week are losing their jobs, there are even more moving off the unemployment rolls. But so slowly… 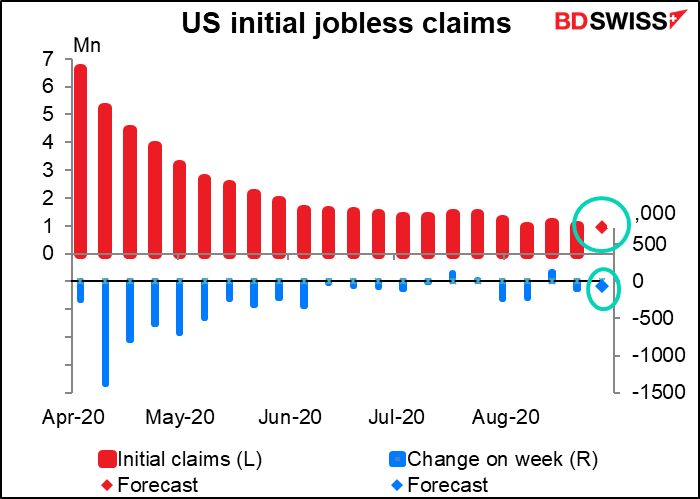 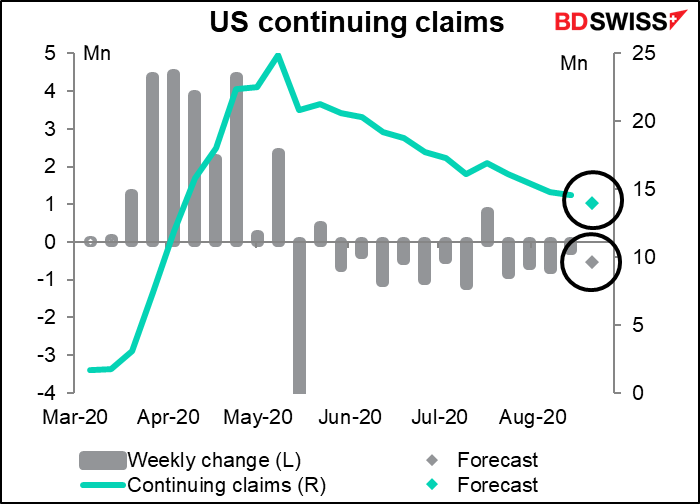 The US trade deficit is forecast to hit a post-Global Financial Crisis high (or low, actually – a negative number is low. Or really, I should say “wide” – deficits are wide or narrow, surpluses are high or low). 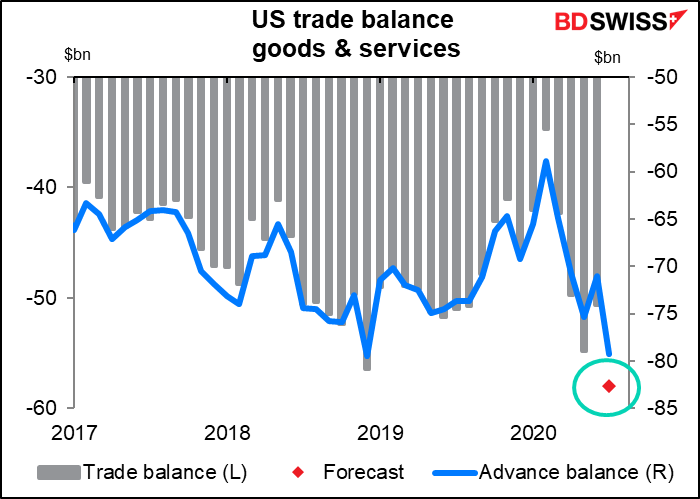 I thought this might be because with so many oil fields shutting down the US isn’t exporting as much oil, but that doesn’t seem to have any effect – it’s not importing as much oil either, and trade in oil is still roughly balanced. It’s trade in other goods that’s deteriorated a lot. Both imports & exports have collapsed during the pandemic. 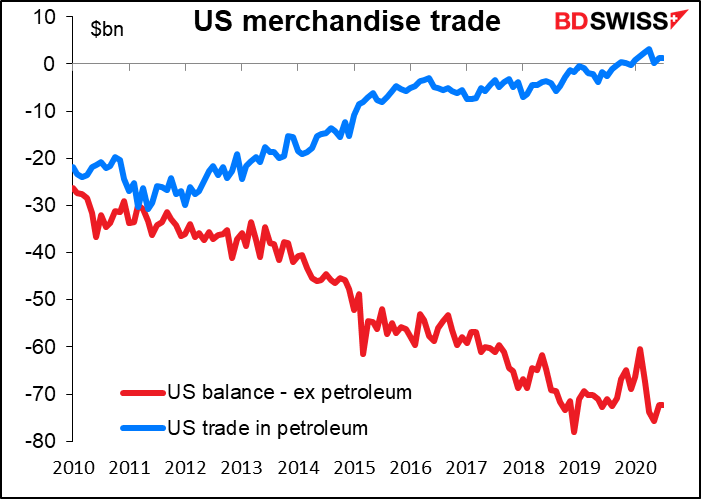 Like yesterday’s manufacturing index, the Institute of Supply Management (ISM) non-manufacturing purchasing managers’ index (PMI)  is expected to be slightly higher than its Markit counterpart. It’s forecast to decline a bit but remain well in expansionary territory. I think a slight decline is anticipated as the pandemic widened in the US during August. 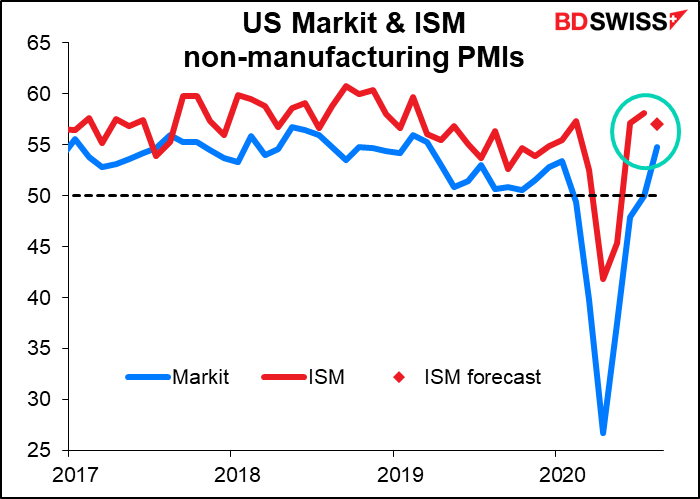 Australian retail sales are expected to continue their dynamite performance. They’re forecast to be up 3.3% mom, which would bring them to 11% above the average level of January & February. This will not surprise the market at all however as the Australian Bureau of Statistics is now producing a preliminary forecast that’s proved pretty accurate so far. It will not surprise you at all to find that the ABS’s forecast for the month is…+3.3% mom. 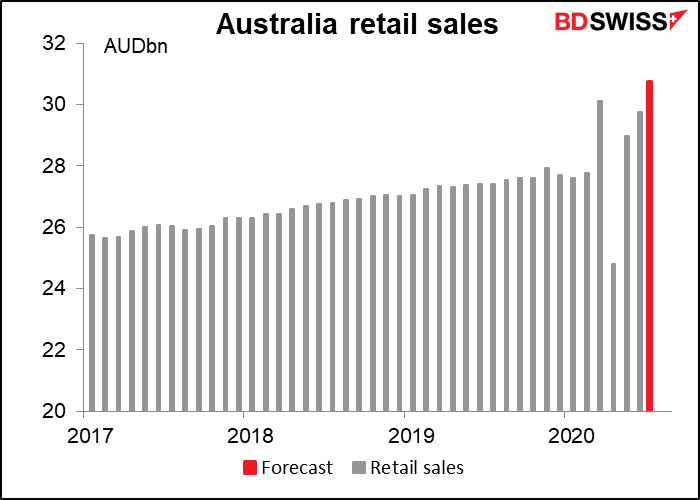 Then in the early early morning, German factory orders are expected to show what would be a healthy mom rise in normal times but is down sharply from the previous month’s leap. That’s consistent with the story of a recovery that continues at a slower pace. Despite the mom rise, factory orders are expected to be down substantially from a year earlier, not to mention down 7.4% from the January/February average level. But capital investment around the world has been weak so this is probably not unexpected. 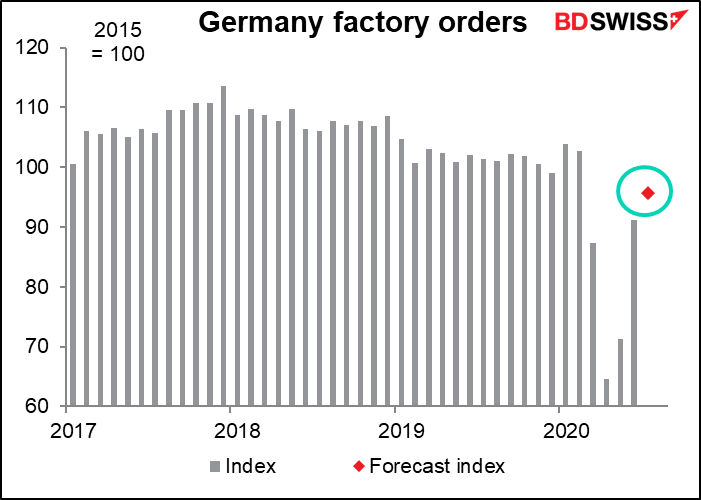 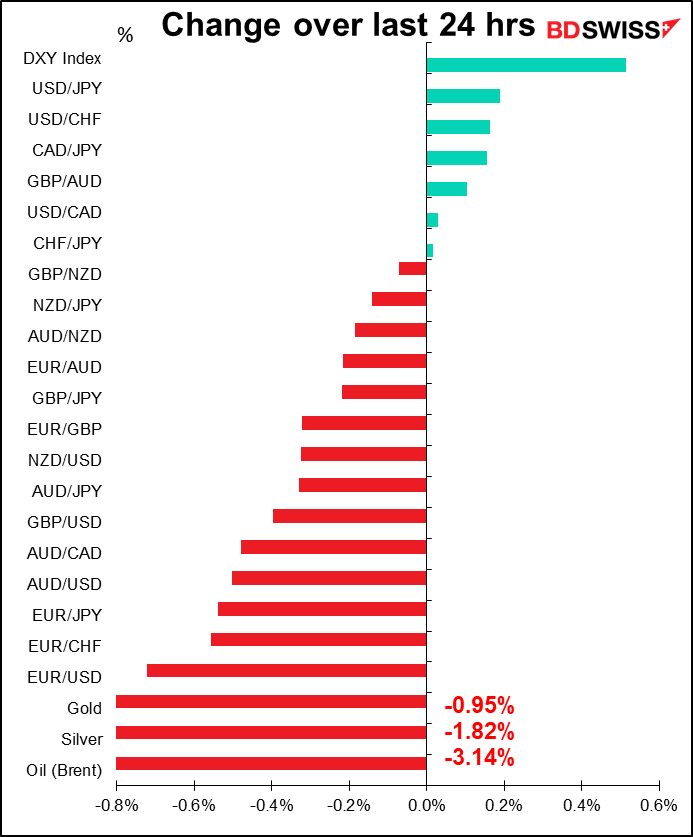