You are at:Home»MARKET PREVIEW»USD Soars on Better-Than-Expected US Data; US Nonfarm Payrolls

A day that broke the pattern – A few days ago I was looking at volatility, trying to see just how low volatility has gotten as a measure of how sluggish the market is. Then we get this!

Thursday’s action also changed another rule-of-thumb: recently good news for the US economy has been good for stocks and bad news for the dollar. But yesterday the economic news beat all expectations and the dollar soared as a result. The ADP report showed a whopping 978k increase in jobs vs 650k expected – if today’s nonfarm payrolls equal that, it would even beat the stunning 916k figure from March. Initial jobless claims also fell a tiny bit more than expected (to 385k vs 387k expected), in any case falling below 400k for the first time since the pandemic began. And the Institute of Supply Management (ISM) service-sector index rose to a record 64.0 from 62.7, beating expectations of 63.2 (the Markit service-sector PMI was also revised up). At the same time the ISM prices paid figure hit 80.6, the second-highest on record. 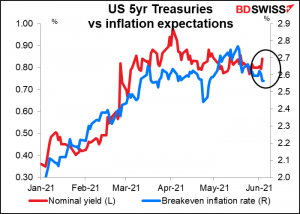 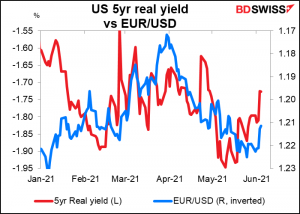 As did increased expectations of Fed tightening. 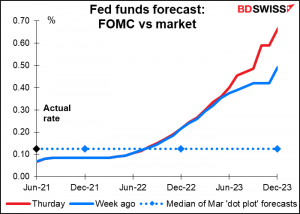 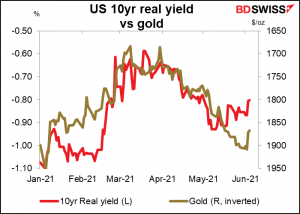 But why AUD and NZD were the worst-performing currencies is a bit of a mystery to me. They’re the ones most leveraged to a stronger global economy, especially AUD. Agricultural commodity prices retreated a bit yesterday so I can understand NZD falling, but AUD seems ripe for a bounce-back, in my view. 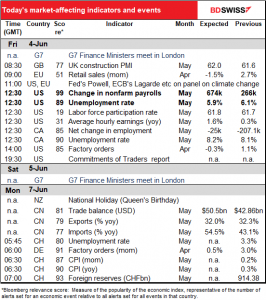 It’s US nonfarm payrolls (NFP) day today! As usual, I wrote more than anyone would possibly want to read about this in my Weekly Outlook, so please refer there for coruscating insights into the nature of “full employment” as defined by the Federal Open Market Committee (FOMC) nowadays. In short, they are looking for “broad and inclusive” employment gains, meaning more than just a fall in the headline unemployment rate – they want to see less-privileged and lower-waged workers getting back to work, and if someone has to pay them more, well then all the better. 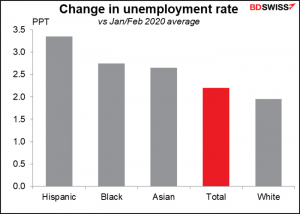 This graph shows how not only people of color but more specifically, women of color have borne the brunt of the rise in unemployment. The FOMC will want to see these people regaining their employment before they do anything dramatic. 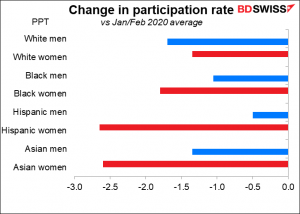 The market was looking for a rise in the NFP of 655k, but after yesterday’s blowout ADP report (+978k vs expectations of +650k) the consensus has risen to 674k (range: 335k-1mn). The Bloomberg “whisper” number, which is simply the vote of anyone with a Bloomberg terminal who wants to vote, is a higher 780k. Although it’s a wholly unscientific figure, it may represent market thinking better than the official “consensus” forecast, because most of the votes were cast in the last few days, whereas the official consensus includes many estimates that were made some time ago. That suggests a miss is likely to be more surprising to the market than a beat. 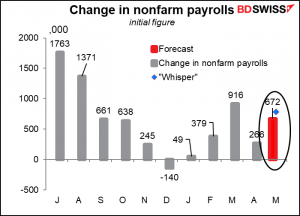 The unemployment rate meanwhile is expected to tic down to 5.9% from 6.1% 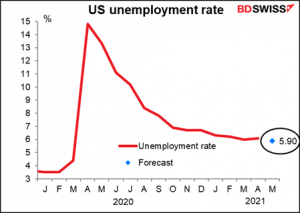 The question is whether this would constitute “substantial further progress” in solving the US employment problem. Fed Chair Powell previously said he wanted to see “a string” of NFP numbers like the +916k in March before he could decare “substantial further progress.” I think +672k would qualify as one of the beads in that string. Two numbers may be “further progress” but +1588k jobs are not “substantial” by any means, especially in the context of the 7.5mn or so jobs that would be required just to get back up to the pre-pandemic level. So it would be the right direction and would add to the “risk-on” tone, I believe, but it would by no means cause the Fed to declare victory.

Some Fed officials have also talked about earnings as a metric for gauging the tightness of the labor market. I think they want to see earnings rising, particularly for lower-paid workers. The consensus forecast of a +0.2% mom increase in average hourly earnings is hardly the stuff of hyperinflationary nightmares. In fact it suggests a labor market that is not as tight as much of the anecdotal evidence would have us believe. 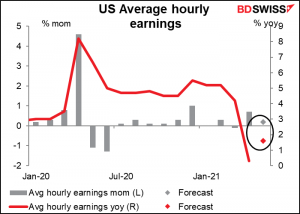 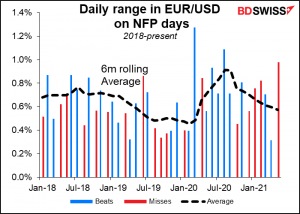 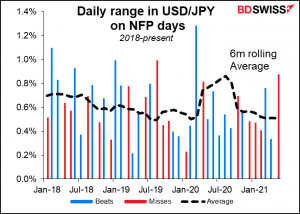 We also have the start of a two-day G7 finance ministers’ meeting. I also discussed this at great length in my Weekly. Don’t you now regret not reading it every week? Anyway I’ll save you the time of referring back and just repeat what I said.

The G7 finance ministers meet in London on Friday and Saturday ahead of the June 11-13 G7 Summit in Cornwall, England. The finance ministers are expected to agree on some uniform taxation of multinationals. That would give a boost to the formal negotiations taking place at the OECD in Paris and directed by the wider G20 group.

There are two aims to the negotiations: one, to set a global minimum tax rate for multinationals, and secondly, to ensure that part of their global profits are taxed based on the location of sales. The goal is to limit the ability of companies to shift profits to low tax jurisdictions and instead to ensure that the big US digital companies pay more taxes in the countries where they make sales. If the finance ministers can reach an agreement, the G7 leaders could formally agree to it at the G7 summit the following week, and present the plan to the 139 nations negotiating under the “inclusive framework” at the OECD.

The discussions could be important for the FANG+ stocks that are active globally, such as Facebook, Apple, Amazon, and Google.

Meanwhile, the BIS, IMF, Banque de France, and the Network for Greening the Financial System have teamed up this week to put on the Green Swan 2021 Global Virtual Conference. It’s been going on since Wednesday, but I didn’t mention it before because it’s about climate change and central banking, an important topic in general perhaps but not immediately market-affecting for foreign exchange. Today is the last day of the conference and the day they wheel out the heavy hitters to discuss “Central banks and climate change: how to manage expectations, balance actions and communication and contribute to coordinate with other important actors?” The panel discussing this issue will include BIS head Agustín Carstens; ECB President Lagarde; PBoC Gov. Yi Gang; Fed Chair Powell; and Banque de France Gov. Villeroy. I doubt whether they will say anything besides “climate change is bad” and “we must do something,” but you never know.

Along with the US employment data, as usual we get the Canadian employment data too. Some provinces were forced to tighten their restrictions during the month, which the market expects led to some job losses and a small uptick in the unemployment rate. I doubt though whether this will be enough to disrupt CAD. 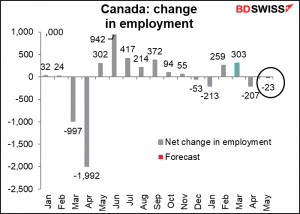 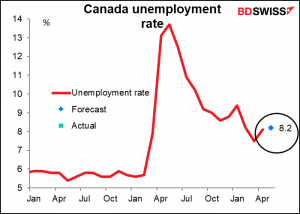 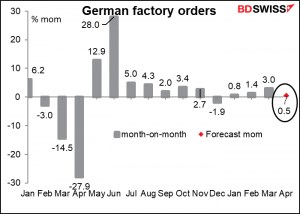 But that would still put orders 8% above the Jan/Feb 2020 average and 10% above the 2019 average, so some slowdown is normal, I’d say. Furthermore, with the manufacturing purchasing managers’ index (PMI) at 66.2 in April, I don’t think people are worried about the German manufacturing sector. 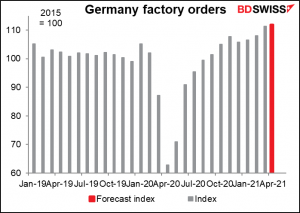 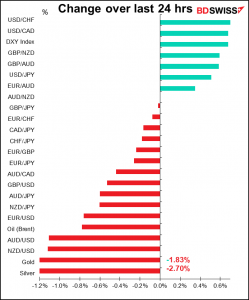