Note:  The rates above are out of date. Citi has clarified that they only update the data once a day, at midday in London. As you can see from the graph at the bottom of the comment, the market movements over the last 24 hours have been much greater than that (the DXY index, for example, which is among the world’s worst indices, is +0.76%). The Citi TWIs are much better constructed than the Deutsche Bank versions that I was using before, but they’re not live. I’m still searching.

Most of the movement took place on Friday afternoon in London. For most currency pairs the big move was over by 15:30 GMT, which makes me think that activity was centered around the 4 PM London fixing, which on Friday was particularly important as it was the end-month fixing rate. EUR/USD and GBP/USD for example this morning are pretty much the same as they were around that time Friday.

USD/JPY is an exception as that not only rocketed during the US morning Friday but has continued to rise today in the absence of Japanese market participants, who are off enjoying their Golden Week holiday. See my Weekly Outlook for a brief review of how USD/JPY usually trades during Golden Week. (short answer: sometimes it’s up and sometimes it’s down. No consistent pattern.)

CAD was an outperformer. The rise in USD/CAD was far less than one might’ve expected given the 2.7% fall in oil prices and CAD gained on many of the crosses. It looks like market participants have taken to heart the Bank of Canada’s recent tapering move, the first among the major central banks to cut back on its extraordinary stimulus. The move has given rise to some divergence within the dollar bloc, pushing AUD/CAD down through 0.9500, a line that has proved to be support and resistance for the pair. This could mean the start of further declines if the Reserve Bank of Australia, which meets tonight, stands pat as I expect (see below).

In theory then we could see a similar reaction in GBP on Thursday if the Bank of England decides to taper its weekly purchases for the Asset Purchase Facility (APF), although of course for the two situations to be totally analogous we’d have to have Quebec holding an election that might lead to an independence referendum. So far though Thursday’s elections for the Scottish Parliament don’t seem to be having much of an impact on the FX market yet, probably because the road to independence is so long that this first step doesn’t really mean much. (As usual, see my Weekly Outlook for more details on this subject, or the Special Report that will be published later today.)

Friday was mostly a day of cutting positions, or so it seemed. Equities generally fell, oil prices fell, metals fell. Bond prices rose a bit however, at least in the US.

Last week I said that the specs were “short and wrong” on JPY and might cover their positions, thereby pushing USD/JPY even lower. That did indeed happen – specs did close out some of their shorts and the pair did move lower for most of the week, although it turned around just on Tuesday, the day the CoT Report data is compiled.

EUR positions were barely changed.All the action was elsewhere. 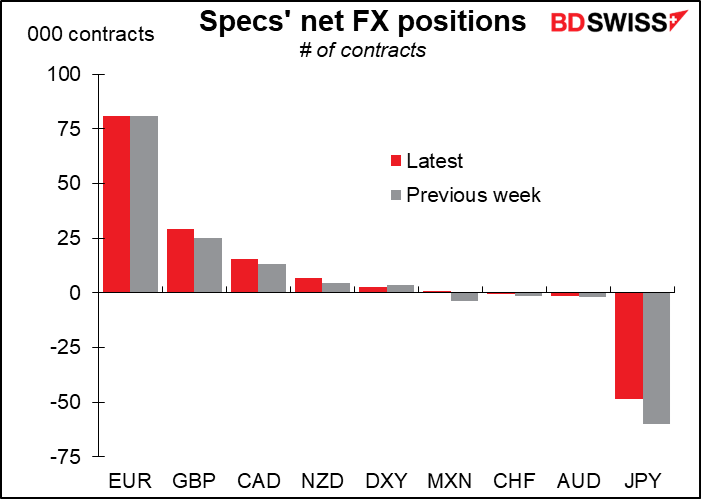 As for the hedge funds, they increased long MXN and long NZD positions but cut long AUD & CHF. They also trimmed their short JPY positions. 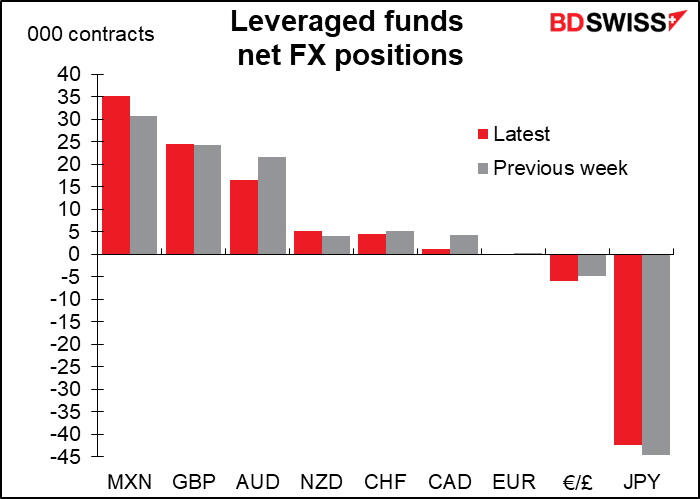 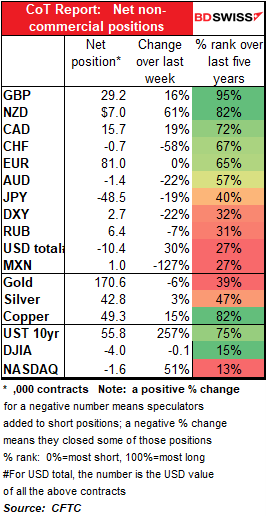 Today was a holiday in Japan and China and it will be a holiday in the UK, too. Since London is the largest global center of foreign exchange trading, activity may be somewhat quiet today.

One thing not on the schedule above: there will be a G7 foreign and development ministers’ meeting today through Wednesday. According to the G7 website, the ministers “look to establish a shared approach among the world’s leading democracies on equitable vaccine access, to agree global girls’ education targets, rigorous goals on climate finance and new measures to prevent famine and food insecurity.” I’m not sure whether this will have any impact on the FX market though.

The big event of the day is overnight, when the Reserve Bank of Australia (RBA) meets. As usual, I went into this in my Weekly Outlook in so much detail that it would bore you even if you were already asleep. Nonetheless, I have to understand that there may be one or two recalcitrant souls who read my daily comment but not my coruscatingly brilliant weekly, so I will repeat the main points here for your convenience.

The Reserve Bank of Australia (RBA) is not likely to have a very exciting meeting. I expect them to leave their policy settings unchanged. Any excitement will arise from the updated forecasts in the quarterly Statement on Monetary Policy (SMP), which will be released on Friday

The biggest decision facing the Board is whether to extend the maturity of their yield curve control (YCC) program, which currently aims to keep three-year yields around 0.1%. That would involve switching their purchases from the April 2024 bond to the November 2024 bond. They said at their last meeting (April 6th) that they would tackle this question “later in the year.” 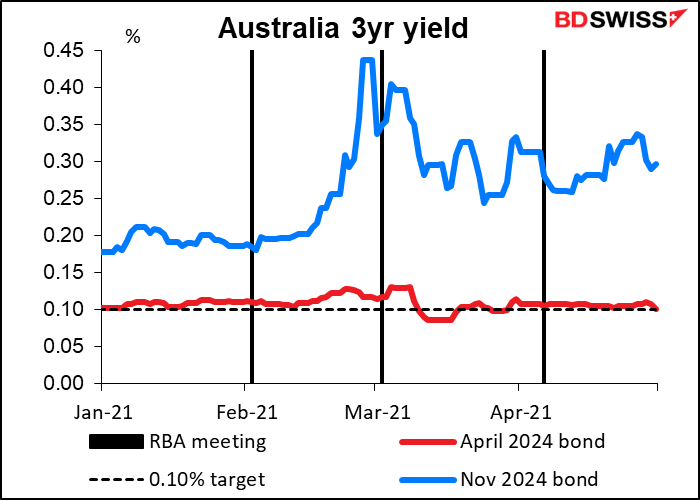 As the graph shows, the market assumes the RBA will not extend the YCC target and

therefore the November 2024 bond is not trading in line with the April 2024 bond. A decision not to roll the purchase would be in effect a “quasi-taper.” Since it’s the three-year yield that’s used as the benchmark for a lot of Australian financial products, such as mortgages, targeting the yield of an ever-shorter-maturity bond would mean allowing the actual three-year yield to gradually drift higher. This would reduce the impact of the RBA’s YCC program on the economy.

Of course, they could also decide just to suspend the entire YCC program. Either way though, I don’t think less than a month later qualifies as “later in the year,” so I don’t expect a decision at this meeting.

With no decisions likely, market attention will focus (as I mentioned) on the updated forecasts. The statement following the RBA meeting will summarize those new forecasts. Given the strong performance of the labor market in Australia – the unemployment rate is already lower than the end-year forecast in February’s SMP and number of jobs is higher than it was before the pandemic – the RBA may decide to revise up its employment and inflation forecasts. That could cause people to assume an earlier-than-planned normalization of policy and send AUD higher.

As for today’s data, the main thing is the final manufacturing purchasing managers’ indices (PMIs) for those countries that have preliminary ones, and the one-and-only version for other countries that don’t, such as Switzerland and Canada. I doubt if the PMIs affect the CHF that much but there could be an impact on CAD.

Later in the day there will be a lot of interest, as usual, in the US Institute of Supply Management (ISM) version of this index for the US. In particular, the prices paid index is often used as an indicator of future inflationary pressures. It’s expected to rise a bit from the unusually high level of the previous month. 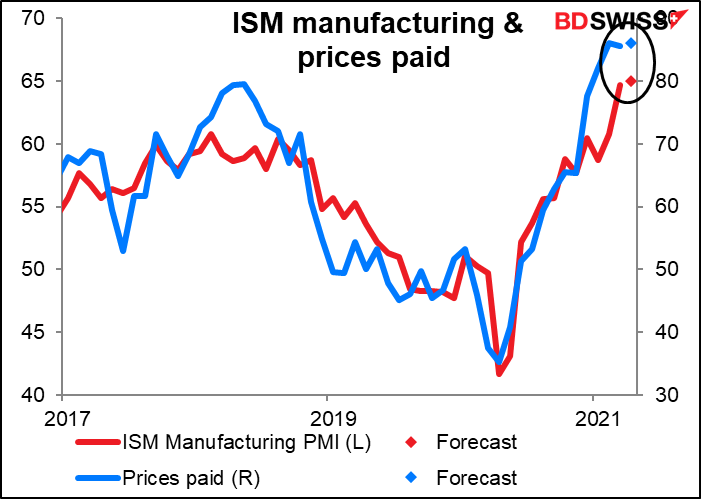 The weekly Swiss sight deposits continue to be a non-event, with last week seeing a tiny CHF 190mn increase. The Swiss National Bank seems to be largely staying out of the market even as EUR/CHF gradually moves lower. Are they setting up a trap for unsuspecting punters? 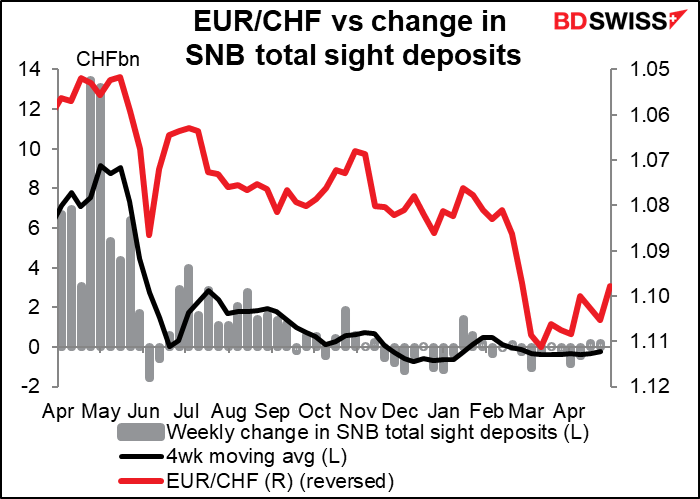 Overnight it will once again be a holiday in Japan and China.

Australia releases its trade data, but the impact if any will be fleeting as the RBA meeting comes just three hours later. In any event it’s expected to be little changed and therefore shouldn’t have much of an effect either way. 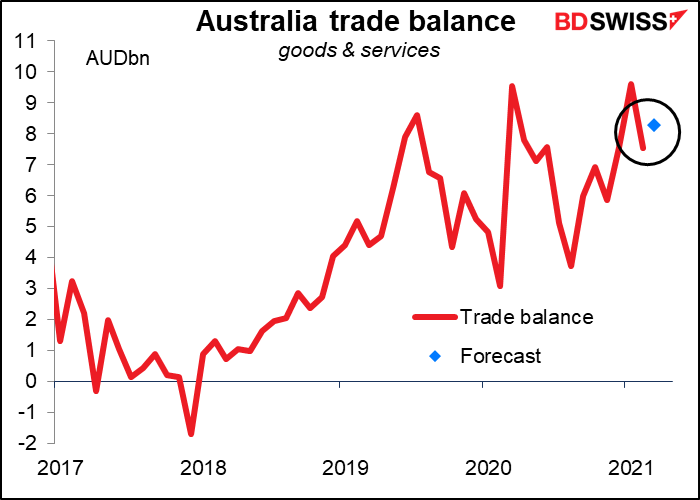 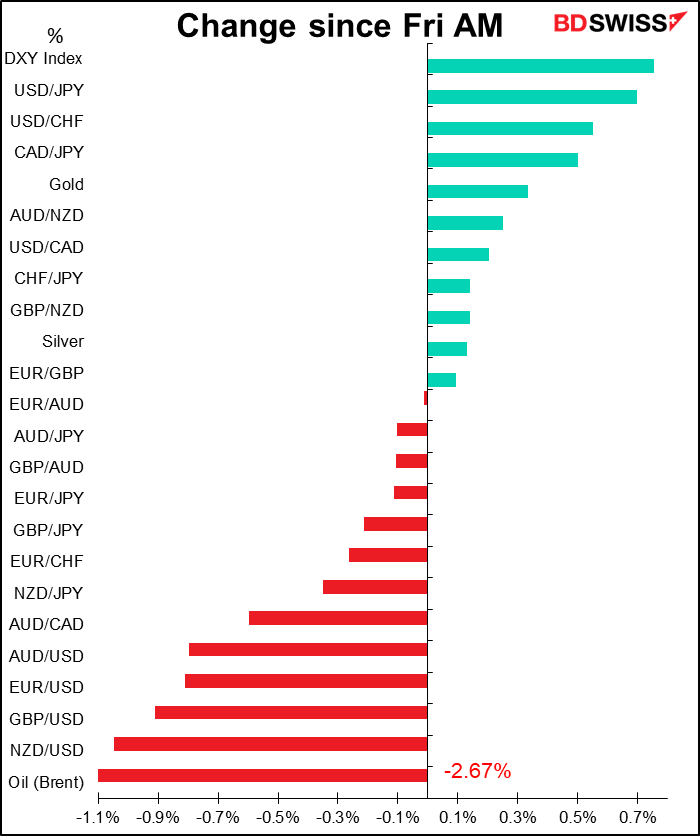