You are at:Home»Market Insights»Thursday’s UK local elections: A risk for GBP

Most of the United Kingdom – England, Wales, and Scotland – go to the polls on Thursday for UK local elections. The elections will be important for the markets for two reasons:

The latter issue is more important for the markets, so let’s discuss that first.

Pro-independence parties have been pushing for a re-run of the 2014 Scottish independence referendum. If these parties win a majority in Thursday’s local election, they are pledged to start working toward such a vote. 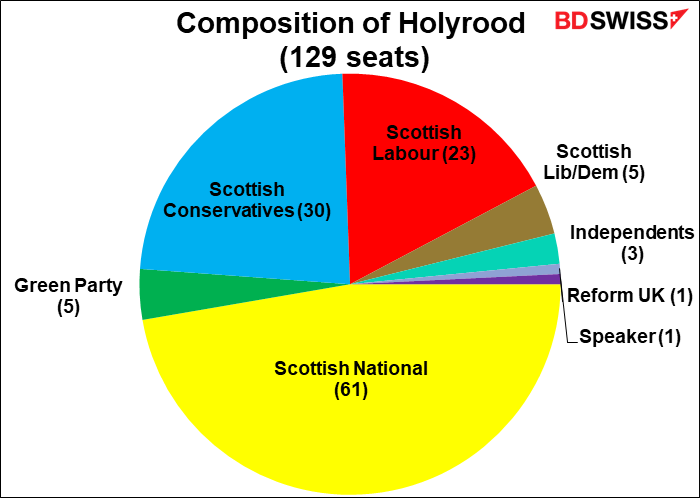 In any case, recent polling suggests the pro-independence SNP is likely to win a majority on its own, and if it doesn’t, the Green Party is forecast to win 10 seats, so that should put the two of them over the top. And then there’s the new Alba Party, a spin-off from the SNP, which is also pro-independence. On the other hand, the three major national parties – the Scottish Conservatives, Scottish Labour Party, and the Scottish Liberal Democrats — will be actively campaigning against independence.

Voting closes at 2200 GMT, but because of the pandemic the counting won’t begin until Friday morning, which means the result is likely to come out over the weekend, when financial markets are closed.

How to achieve independence

It would take three steps for Scotland to start on he road to independence:

What would independence mean for Scotland?

Before there’s even a referendum it’s a bit early to be discussing what independence might mean for Scotland. I just want to highlight some of the major issues here:

In sum, one wonders how a country with a large debt burden, gaping fiscal deficit, perennial trade deficit and depleting natural resources will make it on its own. However, as we saw with Brexit, economic arguments aren’t always #1 in peoples’ minds.

Impact of Scottish independence on the rest of Britain.

The impact of Scottish independence on the pound doesn’t depend on the effect that independence would have on Scotland, however. It depends on how it would affect the rest of Britain. One might argue that given Scotland’s large budget deficit, which has to be covered by the rest of the Union, Scottish independence might be a net positive for the remaining nations. However, the reduction in trade is a net drag on the rest of the UK, albeit much smaller than for Scotland. The CEP estimates that rest-of-UK income per capita falls by between 0.2% – 0.4%, depending on how the border is established. This is much smaller than the 4.2%-6.3% per capita decline in incomes that they forecast for Scotland, since trade between Scotland and the rest of the UK accounts for 44% of Scotland’s trade vs only 3.9% the other way.

Britain would also lose North Sea oil revenues, although those have been declining for many years now and are no longer the market-moving factor that they were in the 1980s.

But the biggest factor in my view would be the impetus that Scottish independence would give to Northern Ireland (NI) leaving the UK, too. Northern Ireland also voted to stay in the EU, and of course many (but by no means all, or even a majority) of its residents would actively prefer to join with the Republic of Ireland. Geographically, NI is closer to Scotland than to Wales, and the Unionists in NI (those who want to remain in the United Kingdom) are generally descendants of Scots. Scotland leaving the Union would therefore “undermine what it means to be a unionist”, says Donnacha Ó Beacháin, Associate Professor of Politics at Dublin City University’s School of Law & Government. “Ultimately, that’s the core of the identity of being a Unionist – but if the union no longer exists, you’re being loyal to a cause that is no longer there, you become a living anachronism in a way,” he said. 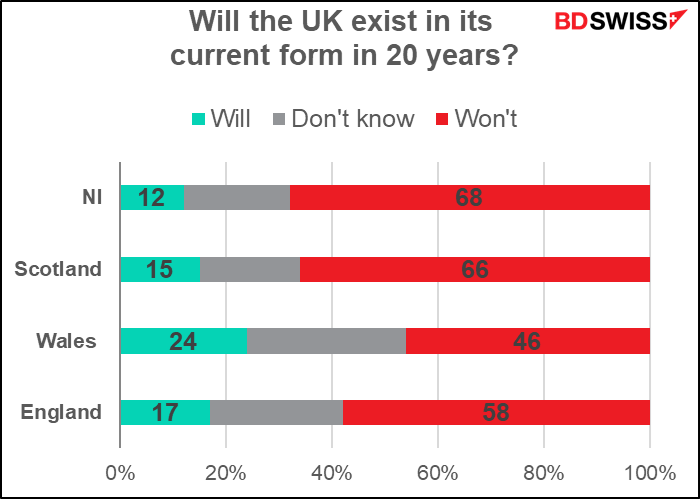 There’s no doubt that just England and Wales together would be a much-reduced country, with less trade leading to slower productivity growth, a lower standard of living, and a weaker economy. That suggests a weaker currency, too.

Short-term impact on the pound

Even if the SNP and other parties in favor of “leave” win Thursday, there are still further hurdles to leap. I think the risk of all three events happening is relatively low. Nonetheless, given the surprise “leave” vote in the 2016 Brexit referendum, we clearly can’t dismiss the possibility. I think Thursday’s vote is likely to be a short-term risk event for sterling.

The market doesn’t seem to be worried, though. There’s been no big change in the risk reversals as the election draws near. 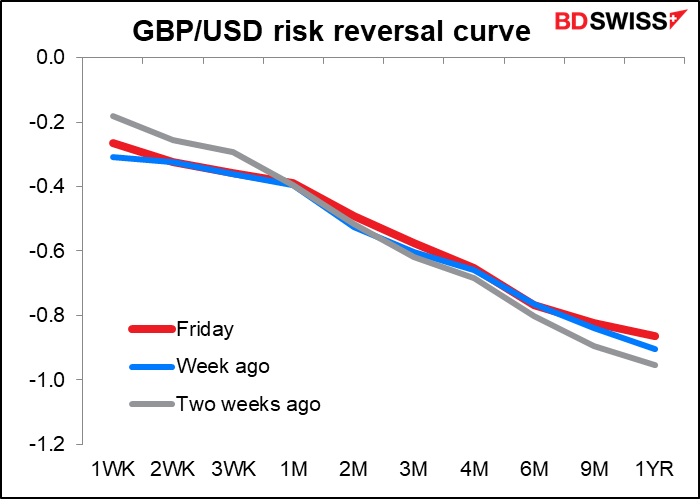 If anything, the perceived risk in GBP/USD has been declining recently. EUR/GBP is the same. 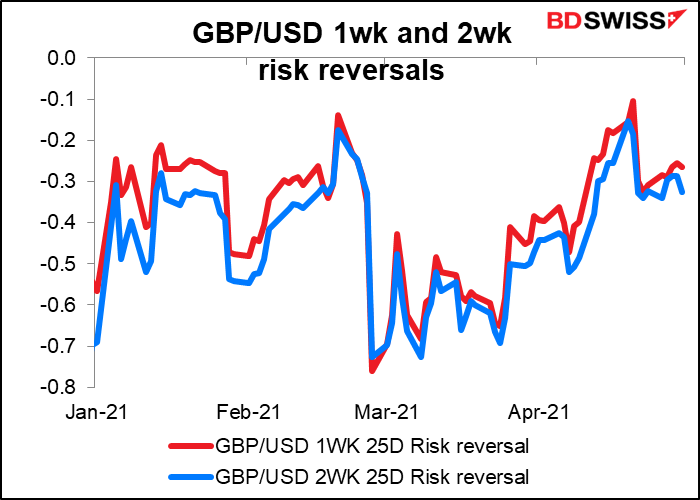 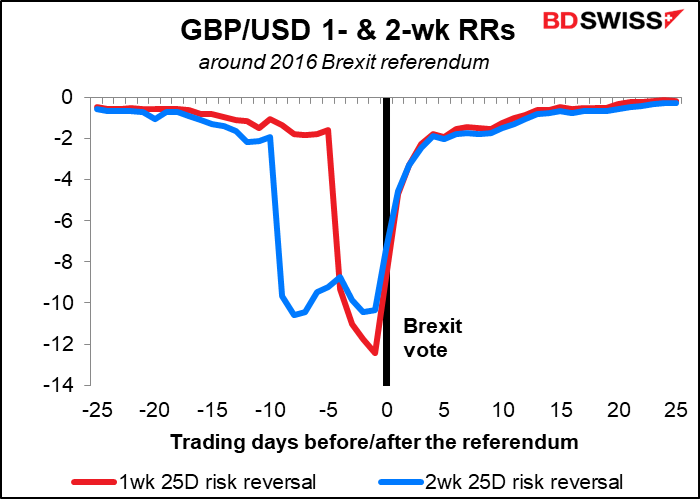 Apparently the market thinks that Scottish independence is such a long shot that it isn’t even worth hedging against. I’m not so sure. Even if the ultimate outcome is highly uncertain, uncertainty is likely (if that makes sense).

Wales:  The vote in Wales is not as important for now, but it bears watching. Support for independence in Wales is only about 25%, but that’s double what it was a few years ago. The main pro-independence party in Wales, Plaid Cymru, want to hold an independence referendum by 2026 if they are the largest party in the Senedd Cymru – the Welsh Parliament — but recent polling makes this seem unlikely. Labour, which have been in government since 1999, appear set to be the largest party yet again, even if they don’t win a majority of 31 seats. 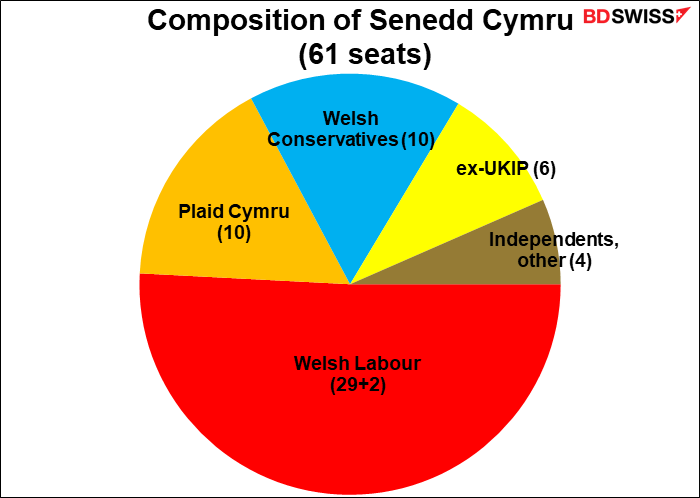