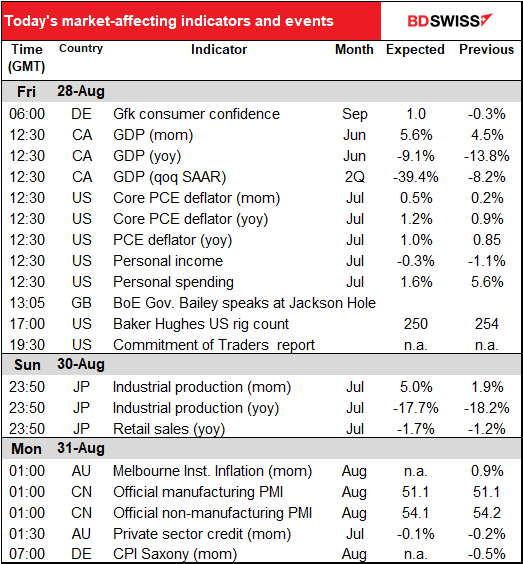 Rarely have I seen anything that was so important for the markets and so highly anticipated, yet at the end of the day had so little impact on rates..

The gist of the Fed’s new formulation of its monetary policy is that “…following periods when inflation has been running below 2 percent, appropriate monetary policy will likely aim to achieve inflation moderately above 2 percent for some time.”

Initially USD fell as people saw that the Fed is indeed going for “average inflation targeting.” However once they read the details and realized that Powell was talking about “a flexible form of average inflation targeting” that would not seek to claw back all the time that inflation was below target, the dollar started to recover. Finally I suppose Powell got to the part where he said, “To an extent, these revisions reflect the way we have been conducting policy in recent years” and the market decided it was nothing new – just making de facto monetary policy de jure.

Powell reinforced the wishy-washy nature of the new policy in the Q&A session, when he elaborated on some of the modifying terms, such as “moderate” (“which is to say not large”) overshoots of inflation “for some time” (“which is to say not permanent”). He also stressed that “this is not a formulaic approach…the Committee will continue to consider all of the things that it typically considers in making monetary policy, but we’ll aspire to have inflation run above 2% after periods in which it runs for an extended period below 2%.” They’ve clearly learned from the Bank of Japan not to make hard-and-fast targets that they can’t meet. Instead they’ll just “aspire” to achieve overshoot.. That means no guarantee of negative real yields, which is less dovish than it could have been.

Please see my Weekly Outlook for a more thorough discussion of the new monetary policy and what it means for the dollar. Insofar as they are not going to insist on clawing back all the undershoot, the new policy may be considered less dovish than it might have been, but looking at the dollar’s movement afterward, it appears this was in line with market expectations.

Oil prices fell during the day as Hurricane Laura made landfall and wreaked havoc on much of the region but appears not to have inflicted major damage on the region’s energy infrastructure, according to Bloomberg.

Elsewhere, although US stocks closed little changed, this morning the S&P 500 futures are up 0.4%, most Asian stock markets are higher, and the FX market is showing a typical risk-on reaction:  buying AUD/JPY.

The first figure today is Canadian 2Q GDP. It’s expected to be terrible, but so was everyone else. The thing to note here is that Q3 is forecast to be almost an equal rebound. 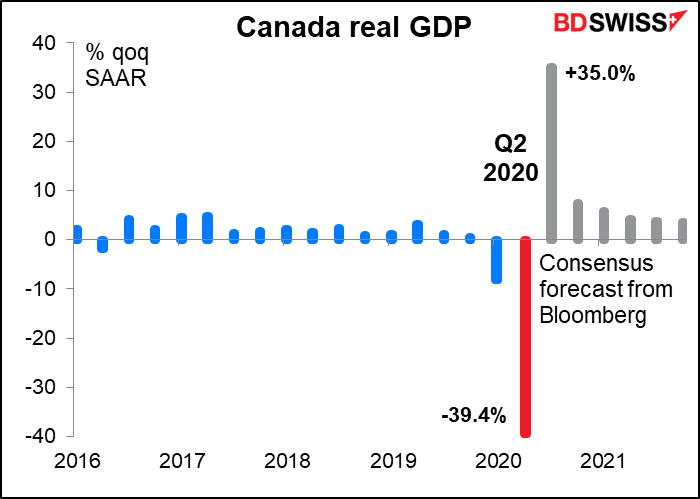 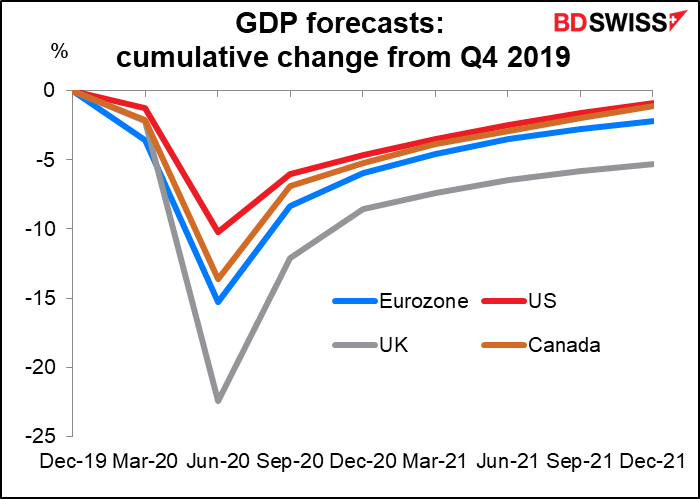 Personal income is expected to be down slightly (-0.3% mom), but that would still leave it well above pre-pandemic levels as government support flows to the unemployed. This is likely to change by next month though as the taps dry up. 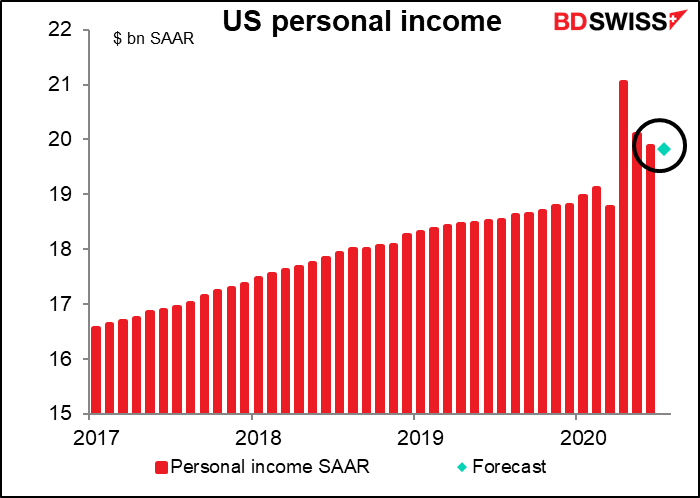 Personal spending however is expected to remain weak, although continuing its gradual recovery (+1.5% mom). So back above March’s level but still well below pre-pandemic levels (94.5% of Jan-Feb average). With the savings ratio estimated to be a still extraordinary 29%, it will be hard for the recovery to gain traction – remember, my spending is your income. 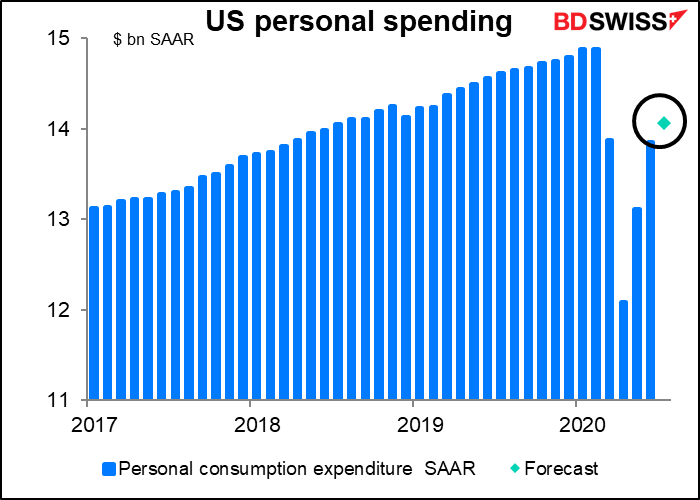 The personal income and spending data come out with the personal consumption expenditure (PCE) deflators. In days gone by I would’ve said those were the major indicators of the week, since they are the Fed’s preferred inflation gauges, but the market isn’t as focused on inflation as it was pre-pandemic.

Still, there was a notable reaction recently when the US producer price index and consumer price index (CPI) for July came out significantly higher than expected. The dollar dropped after the news – in days gone by, currencies used to rise when inflation accelerated because the news made it more likely that the central bank would raise interest rates.

Now that central banks (the Fed in this case) are on hold indefinitely, and in the Fed’s case willing to see inflation rise above target before tightening rates, any acceleration in inflation just means a decline in real interest rates, which is negative for the currency. In that case, we could see the dollar weaken again when the core personal consumption expenditure deflator, the Fed’s favorite inflation measure, accelerates. 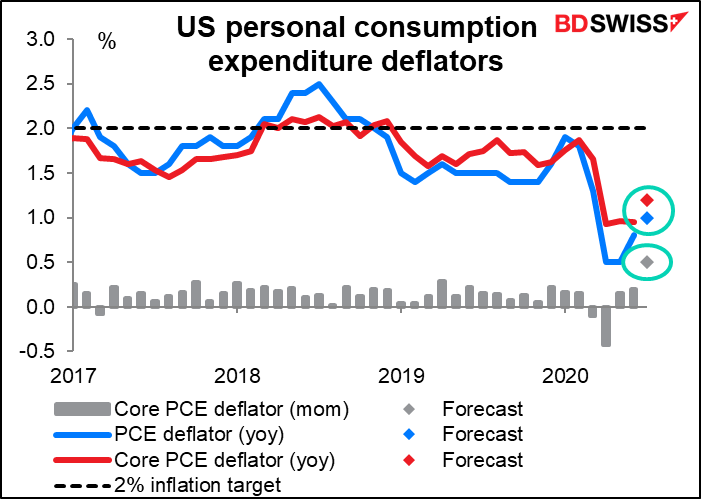 Early Monday morning, Japan industrial production is expected to be up 5.0% mom, which sounds good except that would still leave it down 17.2% yoy, or 15.5% below the average level of January and February. Japan is one of the few countries where the manufacturing PMI is still below 50, i.e. manufacturing is still contracting. That’s particularly bad for an economy that still has a large manufacturing sector. 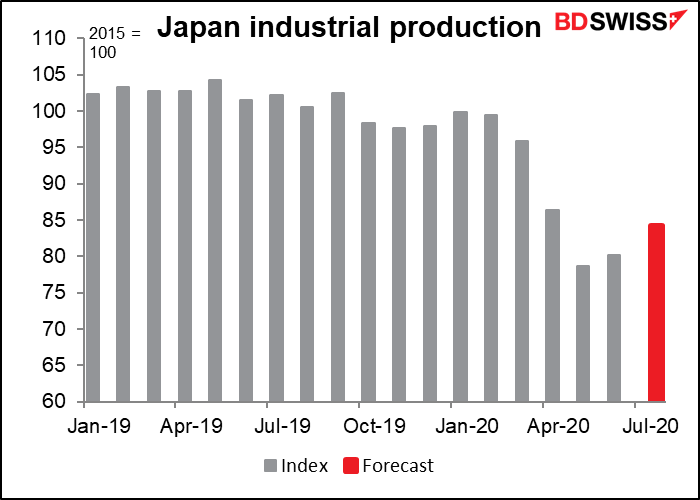 Monday morning, the official China purchasing managers’ indices (PMIs) are expected to continue on their preternaturally stable path. The manufacturing PMI is expected to be unchanged and the non-manufacturing, down just 1 tic. Amazing. 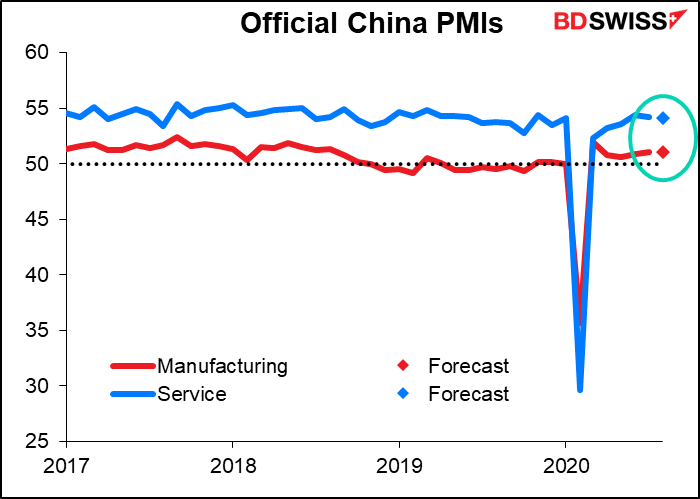 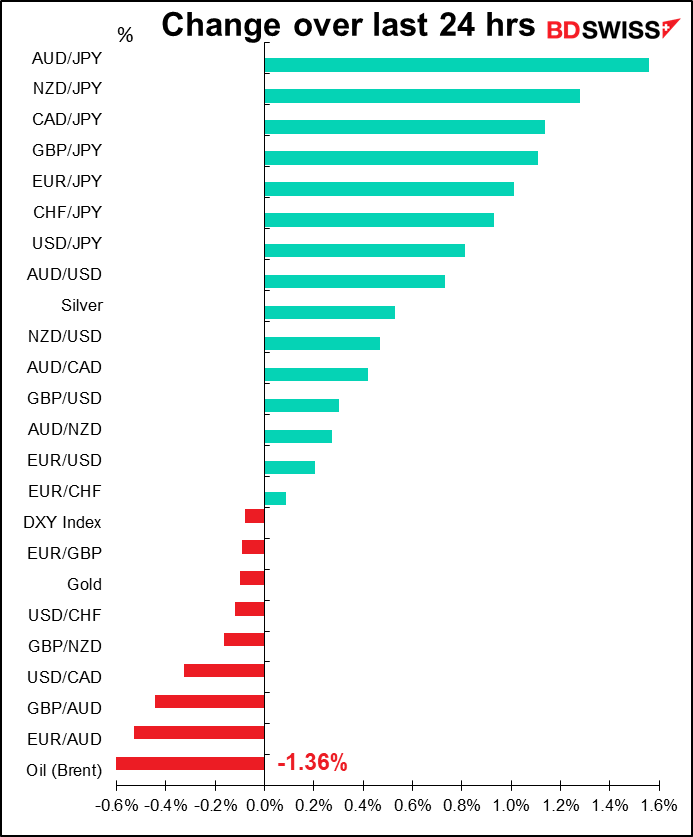