Is it possible? Did we actually have a normal, fundamental-driven market on Friday? It looks that way but you never really know what drove the decision to buy or sell.

EUR/USD fell about 1% from top to bottom during the European day Friday as market participants took profits not only on EUR/USD but on the EUR crosses as well, especially EUR/NZD and EUR/JPY (I got an alert from CLS Services saying that there was unusual volume in EUR/JPY at 0900 GMT).

Just to remind you, here’s the table. Not only did the EU miss expectations, but both the manufacturing and the services indices fell, the latter falling a lot. The Eurozone service sector PMI is now just barely in expansionary territory. It appears that the EU economy is on the verge of stalling. 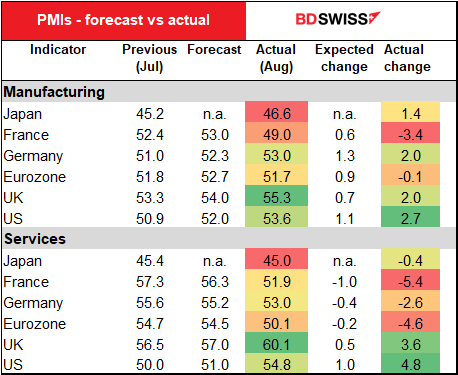 The wonder in all this is that GBP was far and away the worst-performing currency of those that I track even though Britain’s July retail sales beat estimates nicely and the UK composite PMI rose to its highest level since October 2013!!! 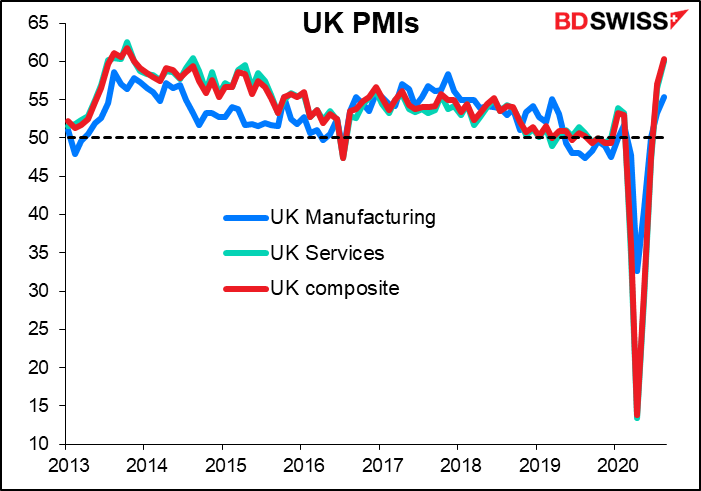 It may be that Brexit is affecting GBP after all. EUR/GBP seemed to bounce from the day’s lows – i.e., GBP started weakening vs the already-weak EUR – right after EU chief Brexit negotiator Barnier said that no significant progress was made during the week’s negotiations and that an agreement seems unlikely. There are no formal Brexit talks this week, but the chief negotiators and their teams will meet in “specialized sessions” as necessary. I expect these sessions will indeed be necessary, as the talks haven’t progressed much at all and there’s not much time left. The formal negotiations are scheduled to end on 2 October. EU officials say the bloc needs at least 11 weeks to ratify any agreement (all remaining members have to sign off on it), making the 15 October EU Summit the effective deadline.

On the other hand, the excellent US PMIs and the record jump in existing home sales (+24.7% mom) pushed USD higher. Recently we’ve seen USD move lower on good economic news in that it encourages a “risk-on” mood that’s negative for the dollar, so this was a welcome return to what I consider to be normality.

Asian stocks are mostly higher this morning. I wonder if this “risk-on” sentiment is thanks to the ridiculous announcement about a possible virus cure that Trump made on Sunday. He announced some big breakthrough about “convalescent plasma” and tried to make it sound like it happened because he’s pressing the Food & Drug Administration (FDA) to cut through a lot of the red tape. Don’t believe a word of it. He’s just trying to goose the stock market higher and give himself something to boast about at tonight’s Republican Convention.

The announcement was excoriated on Twitter by Dr. Eric Topol, one of the best-known doctors in the US, who said, “True breakthroughs in medicine are exceedingly rare. It is even more rare — actually unprecedented — for them to be announced by a politician, no less a POTUS (President of the US). In the context of other magic and cures that have similarly been proclaimed in recent months, this all aligns well.”

He then later continued, “It’s even worse than this. There is no breakthrough and the US FDA (Food & Drug Administration) Commissioner has caved to Trump’s pressure (including yesterday’s tweet) to promote it as if there was one.” He said it was “Outrageous to listen to Trump, Health Secretary Azar and FDA Commissioner Hahn claiming a 35% improved survival in an observational preprint study compared w/ late-treated patients. There’s no evidence to support any survival benefit.”

The announcement on the FDA’s website reads, FDA Issues Emergency Use Authorization (EUA) for Convalescent Plasma as Potential Promising COVID–19 Treatment, Another Achievement in Administration’s Fight Against Pandemic Dr. Topol says, “I have never seen such a statement with any FDA approval,” adding that “two days ago the FDA’s website stated there was no evidence for an EUA.”
Economic indicators: Is this as good as it gets?

I noticed that the Citi economic surprise index for the major economies had hit a record high (data back to January 2003). What this means is that economists’ expectations are lagging far behind reality. Usually what happens in such a case is that economists start to revise up their forecasts. That causes traders to revise up their forecasts for the currency or currencies involved and the currency appreciates.

This time however I expect reality to catch up with the forecasts. That is to say, Friday’s purchasing managers’ indices (PMIs) indicted that global growth is stalling. Accordingly, the indicators probably won’t beat the forecasts by as much in the future. 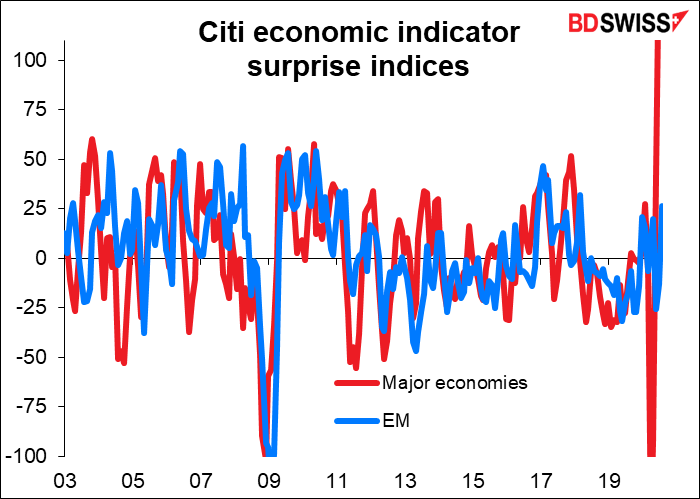 I decided to look into it in more detail and see what pushed the overall developed market index up to a record. The US, UK, Sweden, and New Zealand are beating forecasts by a record amount. Others are still lagging.

What this suggests to me is that growth in those four countries my start to disappoint estimates. It could be negative for USD, GBP, SEK, and NZD going forward. 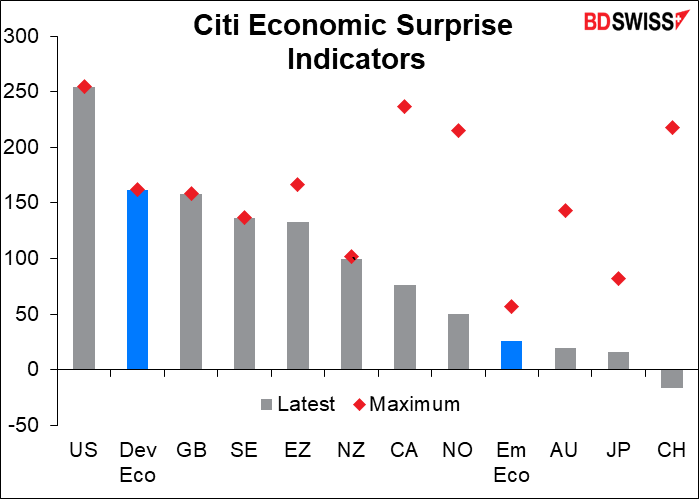 We saw EUR/CHF move over 1.08 last week. We also saw it move back down (unfortunately in my view, but that’s just me). How much did that temporary move cost the Swiss National Bank? Last week CHF strengthened a little bit despite more intervention than usual recently. 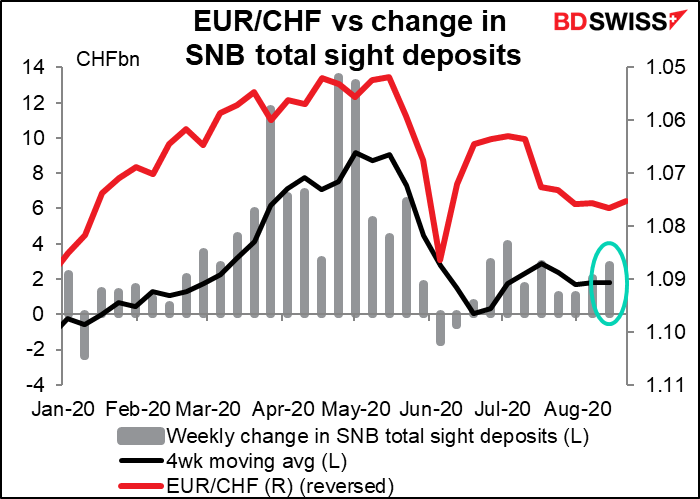 That’s it until the US starts up and we get the Chicago Fed National Activity Index (CFNAI). It’s different from the other regional Fed indices. It’s designed to gauge overall economic activity and related inflationary pressure on a national basis, not regional. A positive index reading corresponds to growth above trend and a negative index reading corresponds to growth below trend.

Unfortunately, the figures nowadays are so wildly out of line with what they’ve been in the past, I’m not sure there’s any meaning to them, much like the 32.9% qoq SAAR GDP decline. From 2010 until February, the range for this indicator was -0.74 to +0.65. Today’s forecast is 3.70. That’s a 13.4 standard-deviation event. I’m not sure what conclusion we can come to based on something so out-of-the-ordinary as that.

The only reliable takeaway from this indicator then, assuming it comes in in line with expectations, is that the US economy was still expanding in July. But we knew that already. 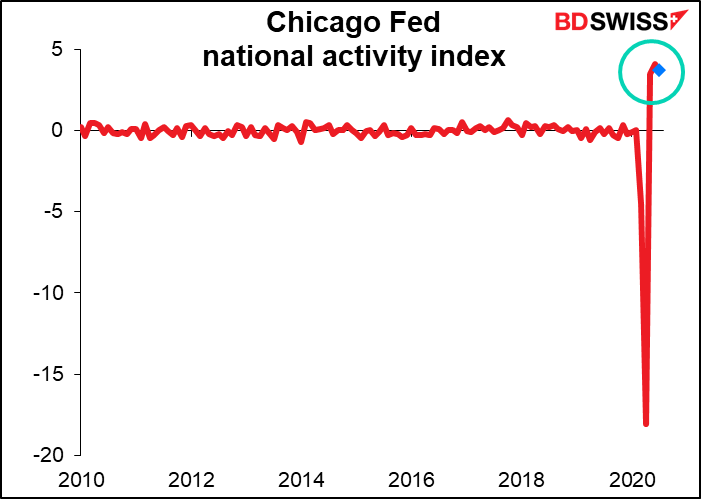 Then we just trade off technicals until Tuesday morning!

The second estimate of Q2 GDP for Germany is rarely revised, and even if it is, it’s usually only by 10 bps or so. And anyway people are worried about Q3 by now, not Q2. So it’s not likely to be a big deal unless there’s some unprecedented revision. 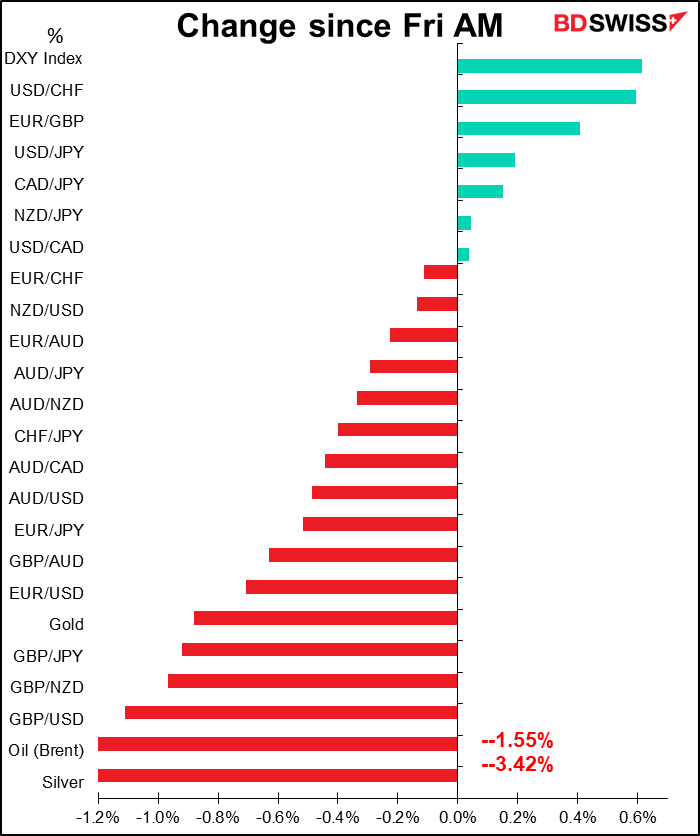