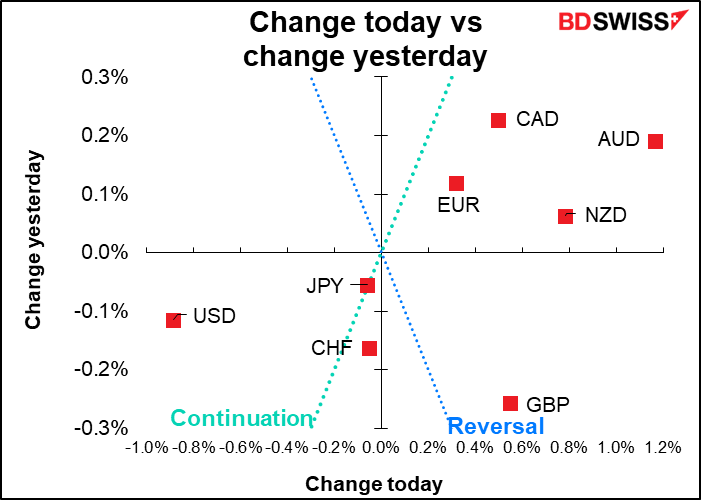 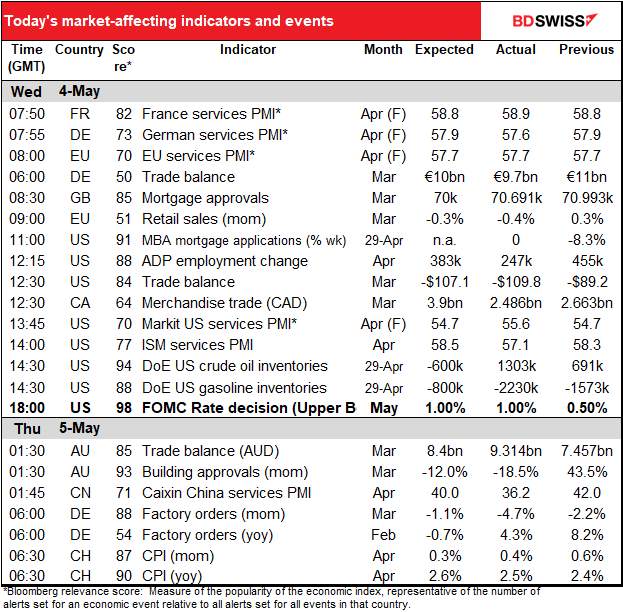 The Fed did as expected: it hiked the fed funds rate by 50 bps and announced that it will begin to run down its balance sheet in June. The statement and the press conference conveyed the Committee’s urgency around taming inflation, Fed Chair Powell indicated that they are not planning (yet) on going “full Volcker*” and hiking extremely aggressively. As a result, risk assets performed well, with AUD surging and the US stock market rallying.

“The Committee is highly attentive to inflation risks,” the statement said, while Powell said in the press conference that “Inflation is much too high and we understand the hardship it is causing, and we’re moving expeditiously to bring it back down.”

“Expeditiously” is a code word for 50 bps hikes. Powell said 50 bps increases were on the table for “the next couple of meetings” and suggested that officials could then resume hiking by 25 bps from September if price pressures showed signs of cooling. He reassured markets that the Committee is not “actively considering” a 75 bps hike, as one or two more hawkish members have been advocating.

These comments were less aggressive than many people had feared. There was some concern that he would “pull a Draghi”# and say that the Fed would do “whatever it takes” to get inflation under control. It appears that the Committee wanted to signal its more moderate plans to the market to remove some uncertainty and prevent market expectations from running away.

On the other hand, Powell was clear that the tightening could cause some pain. He emphasized the need to see the labor market come into better balance, particularly the ratio of job openings to unemployed. Some of that could come through a continued rise in the participation rate but it will also come about by reducing demand for goods and services and thereby reducing job openings.

While Powell has said he wants to get rates back to neutral, he declined to say exactly what that level is. “It is not something we can identify with precision,” he said. “We estimate it with broad bands of uncertainty,” namely 2% to 3%.  Given this uncertainty, his preferred approach is to continue to raise rates until they see inflation pressures easing in labor and product markets. But he also said “it is certainly possible” that the Fed decides that it will need to move rates beyond neutral to restrictive.

The result was a reduction in rate expectations, with the market pricing out one 25 bps rate hike in the next two years. The market is still much more aggressive than the Fed is, although of course those Fed forecasts are from March. 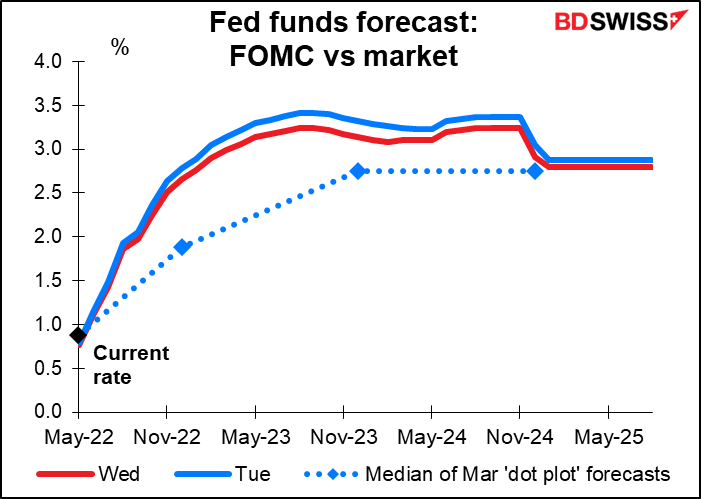 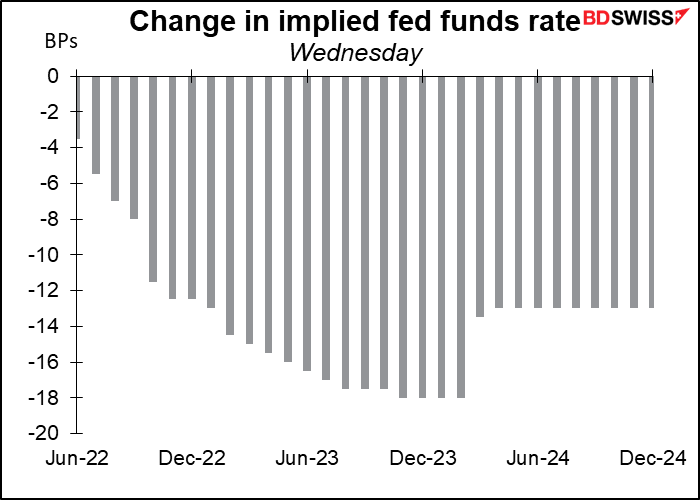 There was a big rally in the US and commodity currency bond markets as a result, with a noticeable steepening of the yield curve (i.e. two-year yields fell by more than 10-year yields). A steeper yield curve indicates less risk of recession. 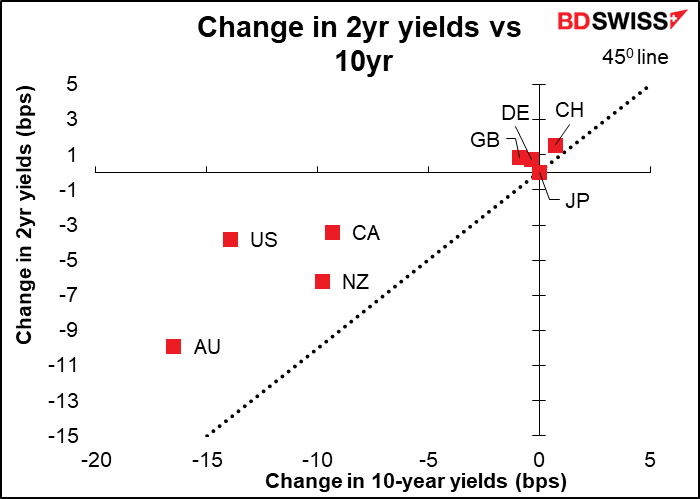 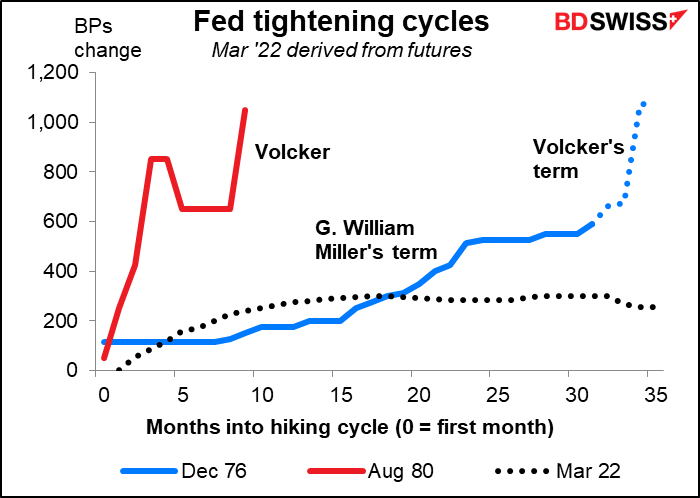 #During the 2012 Eurozone crisis, then ECB President Mario Draghi famously said the ECB “will do whatever it takes” to save the euro.

Elsewhere, the European Commission (EC) proposed phasing out all supplies of crude or refined Russian oil in an “orderly fashion,” according to the FT. The ban would hit crude oil within six months and refined products by the end of the year. Hungary is holding up the proposal however as it gets Russian oil through a pipeline and would find it difficult to get and process other oil. The proposal needs the unanimous agreement of the 27 EU member states to pass.

The FT also said the commission is proposing to bar European ships from transporting Russian oil and products to any part of the world and to prevent European insurers from insuring its transportation. The latter would be an especially effective move as 95% of the world’s tanker liability cover is arranged through an organization that follows European law. These moves would make it more difficult for other countries that are not observing the embargo, such as India and China, to circumvent it.

Economists at Barclays estimate that an embargo of all Russian energy imports could reduce euro area GDP by 5% (that’s not the same as reducing the growth rate of Eurozone GDP). They estimate that since the Eurozone imports its natural gas and crude oil requirements, a 200% shock to European natural gas prices and a 40% shock to crude oil prices would result in a 4% deterioration in the Eurozone’s terms of trade.

While terms of trade hasn’t always been a major factor moving the euro, for the last year or two the two seem to be moving in tandem (I hesitate to argue cause & effect). It would seem likely that if the terms of trade deteriorate further, the euro is likely to weaken further too. 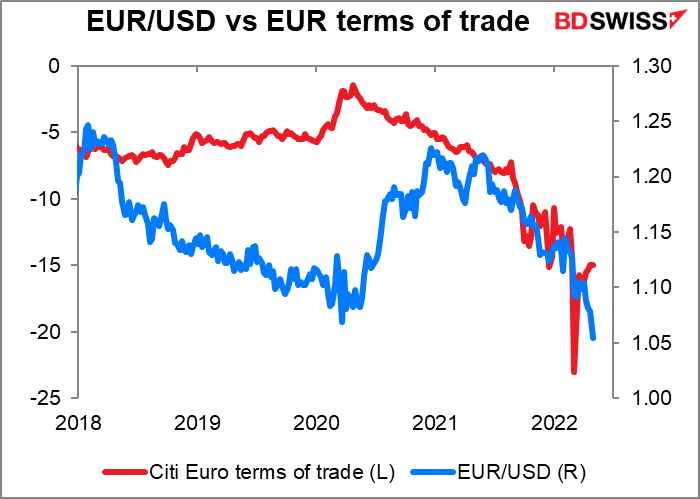 The EU’s plans for an embargo on Russian oil sent oil prices up sharply.. 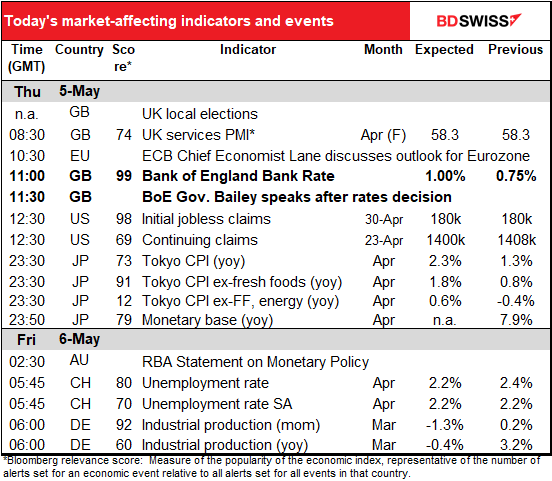 The focus today is squarely on Britain, with a Bank of England meeting and local elections.

I wrote far too much about the Bank of England Monetary Policy Committee (MPC) meeting. in my Weekly Outlook. Nonetheless I’ll recap here what I wrote because I get paid by the word and inflation is hitting me just like everyone else.

The market is pricing in a 25 bps hike at this meeting and a chance – but not a probability – of a 50 bps hike at the next meetings in June and August. 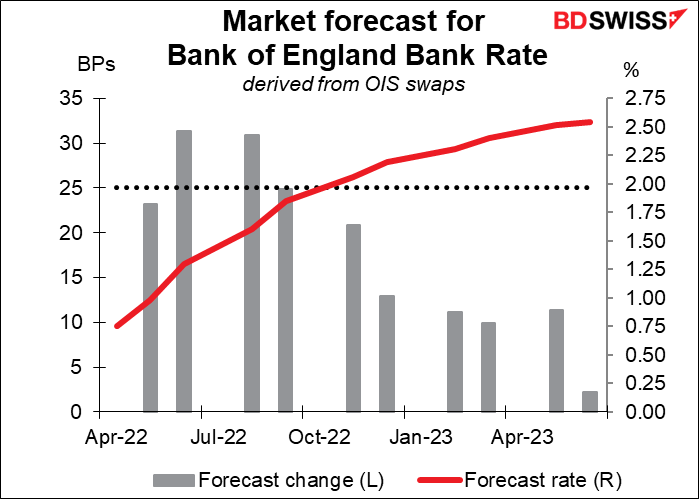 Rate expectations peaked on the 21st but then started to decline after the disappointing retail sales figures for March released on the 22nd. This came as Gov. Bailey said the Bank is “walking a very tight line.” They have to raise rates to tackle inflation, but that will of course cause costs to rise in the economy just as tax increases and inflation mean households are forecast to see the sharpest drop in living standards since records began in 1956. The Bank is therefore worried that pushing too hard against inflation could cause a recession.

Last time, the Bank voted 8-1 to hike by 25 bps, with one member (Deputy Gov. Cunliffe) preferring to keep rates unchanged. Given the rise in inflation since then – from +5.5% yoy to +7.0% yoy – I don’t expect any votes to keep rates unchanged. However I do expect the Bank to emphasize the risks to growth. The MPC’s forward guidance currently reads, “the Committee judges that some further modest tightening in monetary policy may be appropriate in the coming months, but there are risks on both sides of that judgement depending on how medium-term prospects for inflation evolve.”  Watch what they say about the risks – that will be key, I think.

If however Deputy Gov. Cunliffe again votes for no change, and in particular if any of his colleagues join him, then I would expect to see investors revise down their forecasts for rates even more and for the pound to weaken further.

On the other hand, if there is a contingent agitating again for 50 bps hikes, as happened in February, then investors would think that they’ve underestimated the Bank’s resolve. Rate expectations would go shooting up and the pound would be likely to strengthen as a result. I think this is highly unlikely though.

The MPC may also confirm its intention to start shrinking its balance sheet later in the year, although I don’t expect any details about that yet.

As for the UK local elections, some 200 local authorities across Britain are holding elections for around 7,000 seats. Every council seat in Scotland, Wales and London is up for grabs and there are polls across much of the rest of England. The election will be a test for UK PM Johnson, who was fined for holding a drinks party in his residence while the hoi pollio were forbidden from gathering even to say goodbye to dying relatives. If voters take out their anger at him by voting for an opposition party it could lead to him resigning or being forced out. I think it’s unlikely though for three reasons:

The market will be looking to see how well the opposition Labour Party does, although the next general election is still several years away.

The most important part of the election, in my view, will the vote for the Northern Ireland devolved assembly. While the Scottish independence movement has captured most of the attention, it seems to me that Northern Ireland is more likely to break away from the United Kingdom first, not Scotland. With Sinn Féin, a party that seeks to unify Northern Ireland with the Republic of Ireland in the south, forecast to win the most seats and claim the office of first minister, they will be in a better position to agitate for that change (although admittedly they’ve largely avoided the issue during the campaign, preferring to focus on pocketbook issues that are less divisive). Their leadership could be an issue if tensions rise again between the UK and the EU over the province. (Note that Sinn Féin has never won the PM (taoiseach) office in the Republic.)

All in all, Thursday’s elections present an opportunity for GBP to fall even further.

As for the indicators, initial jobless claims are expected to be terminally boring – unchanged. Really, it’s sic transit gloria mundi for this indicator, which joins the US M3 report in the logbook of indicators whose day has passed. No big deal any more. 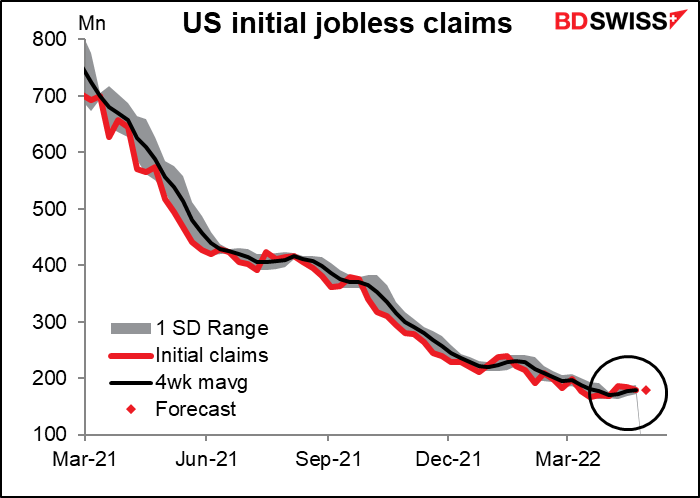 But overnight we do have a big deal – for the first time in years if not decades. The Tokyo consumer price index (CPI) could cause some doubts to creep in about Bank of Japan policy. With the mobile phone charge cuts of April 2021 falling out of the calculation, the headline CPI is forecast to hit an astonishing (for Japan) 2.3% yoy, with the Japan-style core (excluding fresh foods) rising to 1.8% yoy. 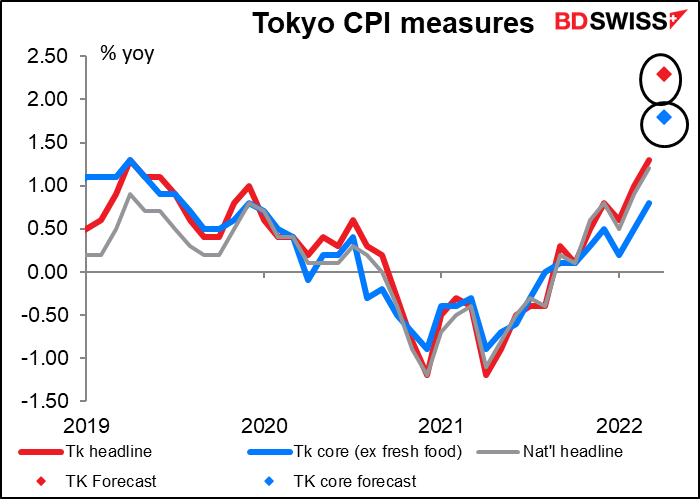 Aside from when the consumption tax was raised, this would be the first time since 1998

It’s unusual for Japan’s CPI to hit the 2% target. Since 1993 the only time the Tokyo CPI has been above the Bank of Japan’s 2% target is after the government hiked the consumption tax, which naturally raises the prices for all consumer goods. 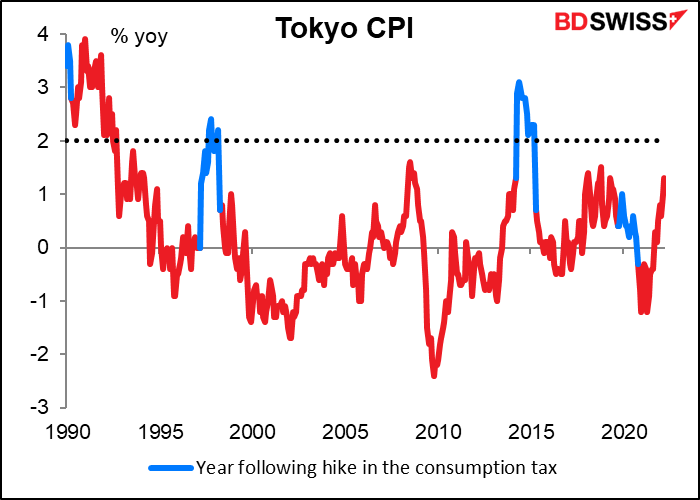 If people think this is a real change for Japan it could cause some short-covering among speculators that could push up the yen. However, I expect any such move – if at all – would be short-lived. The Bank of Japan foreshadowed – and dismissed – in last week’s edition of the quarterly Outlook for Economic Activity and Prices. It said that the CPI “is likely to increase temporarily to around 2 percent” due to higher energy prices & the effect of the mobile phones charges dropping out, but that after FY22 (i.e. from April 2023), “the rate of increase is expected to decelerate because the positive contribution of the rise in energy prices to the CPI is likely to wane.”

Speculators could cut their short positions on this news, but I don’t think the Bank of Japan will change its stance, and without that the yen is likely to continue to decline over the medium term.

Finally, as dawn breaks over the Brandenburg Gate and the Bauernfrühstück sizzle in their pans, Germany announces its industrial production. After five months of gains it’s expected to be pretty miserable, although by no means the lowest in recent months. 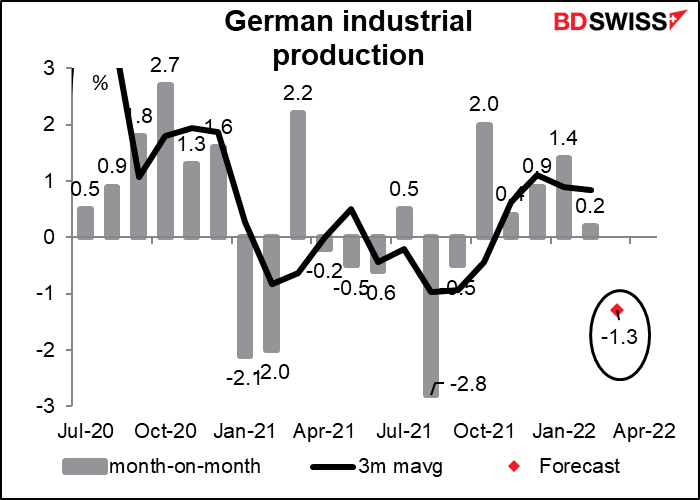 Germany has been a global laggard with regards to industrial production. My guess is that the country’s auto industry is suffering from a shortage of chips, a problem that’s now going to be exacerbated by high energy costs that will knock some producers out of operation as well. 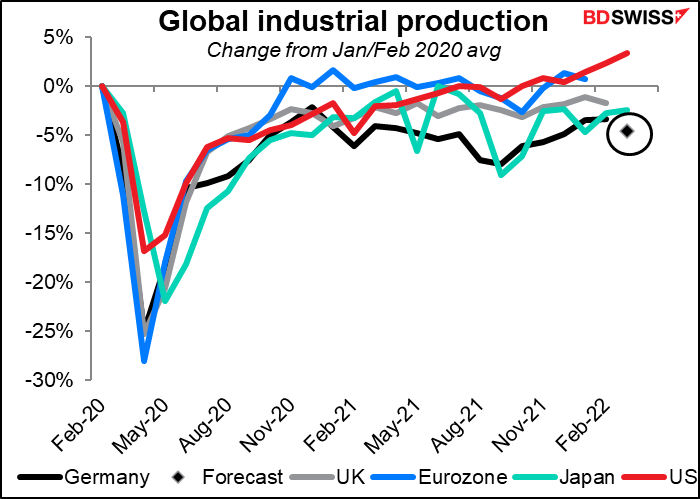 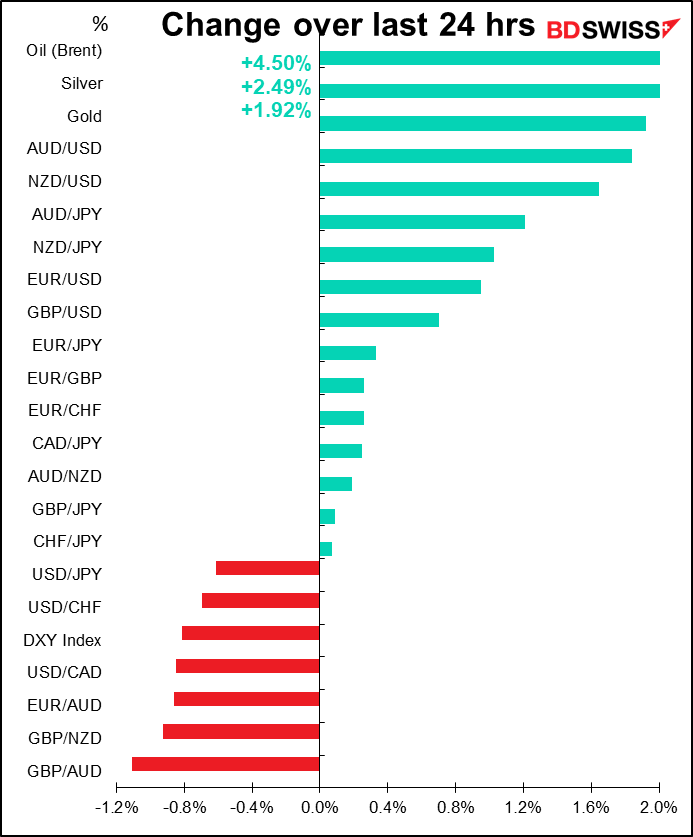