You are at:Home»MARKET PREVIEW»USD Down despite CPI, NZD Up despite RBNZ; Panetta on Digital EUR, Powell Q&A

A big surprise with regards to US inflation. I had been concerned that despite the assurance from the Fed and White House that rising inflation is only temporary, the market would take it more seriously and send Treasury yields and the dollar up. When yesterday’s consumer price index (CPI) came out even higher than expected, I thought “this is it.” The 0.6% mom rise in the CPI was the largest since August 2012. 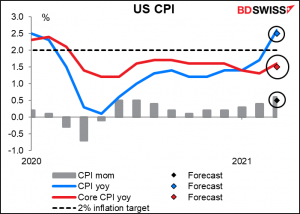 Although one of the reasons for the acceleration in the year-on-year rate of change is the base effect – the fall in prices in the like year-earlier month – if we look at the latest three months on an annualized basis, that too showed prices rising a lot faster than expected. Of particular note is the faster rise in core prices on this basis –core inflation had been expected to slow to +0.5% yoy from +0.7%, but instead it accelerated to +1.9%. That almost puts it at the Fed’s 2.0% target. 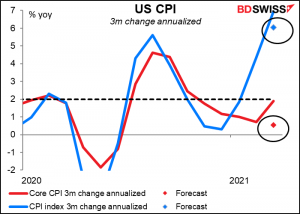 But the market’s reaction was totally the opposite of what I had expected! Inflation expectations fell (-1 bp), Treasury yields fell (-6 bps) and the dollar fell with them. Apparently people were relieved that it wasn’t even worse. Also, the auction of $24bn in 30-year bonds – the reopening of an existing bond – came 1.8bps below the yield on the existing bond, showing strong demand for bonds regardless. This helped real yields to decline. 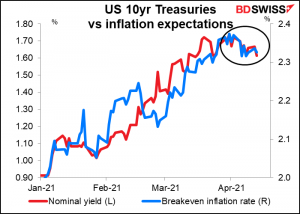 The rise in the inflation rate was caused by the expected factors. Oil was high on the list; according to the Bureau of Labor Statistics, the gasoline index rose +9.1% mom and accounted “for nearly half of the seasonally adjusted increase in the all items index.” Reopening effects were seen in airfares and hotel prices, which rose sharply. Truck and car rental prices jumped 11.7% mom; rental companies slashed the size of their fleets as people stopped traveling and now that travel is coming back, there just aren’t enough rental cars to meet demand. Then there were effects from changing purchasing patterns, which were notable in higher used car prices (+0.5% mom). Some people have decided to drive instead of taking public transit in order to avoid exposure and this is causing used car prices to rise. And of course there were the base effects all around.

These figures suggest that higher inflation should show up in the personal consumption expenditure (PCE) deflator data, the Fed’s preferred inflation gauge, as well, particularly as health care and financial services have been rising in price too. Those have a bigger weight in the PCE deflator than in the CPI.

The Fed, the White House and others have assured us that these price rises are only temporary, but there are reasons to think that “temporary” may mean more than a month or two. Yesterday’s National Federation of Independent Business (NFIB) “higher prices” diffusion index jumped to 25 (% of companies intending to raise prices minus % intending to cut them), a level not seen since 2004-2008, when inflation peaked at 5.6% yoy. 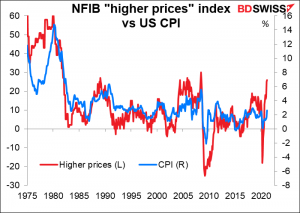 The Institute of Supply Management (ISM) new orders index is close to the highest it’s been since the high-inflation 1970s and 1980s, while customers’ inventories are at a record low. This suggests that manufacturers have regained considerable pricing power. They may use that to raise prices and thereby expand their profit margins after several years of margin compression. As a result, inflation could be higher for longer than the Fed assumes, which might force the Fed to raise rates earlier than it had planned. 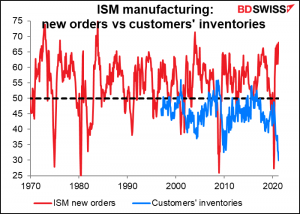 At the other end of the scale, NZD was the best-performing currency as the Reserve Bank of New Zealand (RBNZ) left policy unchanged, as was widely anticipated. Much of the move came before the meeting, although the currency was flat going into it. When the announcement came, NZD/USD jumped. I admit I’m also a bit befuddled by this move as the tone of the RBNZ statement was indeed a bit dovish, as I had expected. It repeated its previous dovish forward guidance – that it won’t remove stimulus until it’s hit its inflation and employment goals, and that meeting this target “is expected to take considerable time and patience.” But it added to and amplified that message by saying that “The Committee agreed that it was prepared to lower the OCR if required.”

Note from the graph that AUD/NZD has already started to turn. I think NZD could weaken further today. The RBNZ statement doesn’t justify a stronger currency; on the contrary, it should be a reason for NZD to retreat somewhat, in my view. Especially vs AUD ahead of what’s expected to be a good Australia employment report (see below). 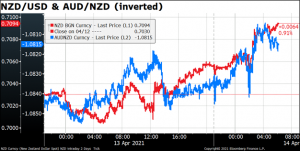 Elsewhere, Bank of England Chief Economist Andy Haldane announced that he would resign from the Bank after the June meeting. He’s been the most hawkish person on the Monetary Policy Committee (MPC), meaning the balance on the MPC is likely to tilt a little dovish (depending of course on his replacement). On the other hand, external member Gertjan Vlieghe is also scheduled to leave the MPC soon; he’s relatively dovish. So perhaps it might just balance out. 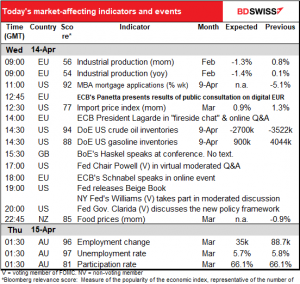 The day starts out with EU industrial production. It’s expected to be down a bit on both a mom and yoy basis (the number of the graph is the mom change, but the dot is red because the mom and yoy forecasts overlap). That’s not so great, considering it didn’t do much the previous two months, either. 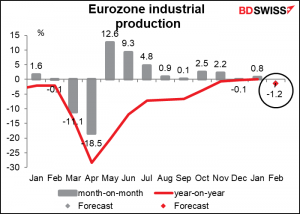 Then again, that’s about par for the course globally. The EU is still expected to be doing a bit better than the US, UK or Japan. 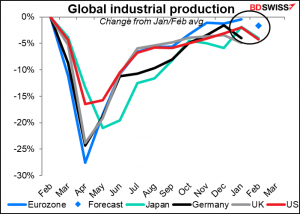 And given the leap in the EU manufacturing purchasing managers’ index (PMI) in February and March, I think people are probably pretty confident about EU industrial production. 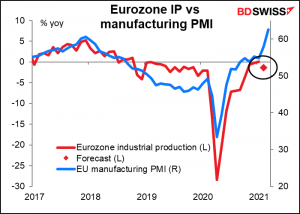 There’s no forecast available for the Mortgage Bankers’ Association (MBA) mortgage applications, but the FX market does sometimes respond to it. So far this year applications for a mortgage to buy a house are running about average. 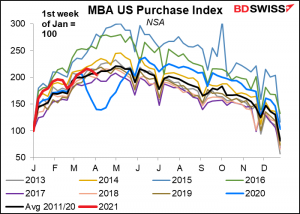 Shortly afterward comes the real interesting bit: European Central Bank (ECB) Executive Board Member Panetta will present the results of the public consultation on a digital euro to the ECON Committee of the European Parliament. I went into this in some detail in my Weekly Outlook, which I’m sure you remember (hahaha). I summarized Panetta’s recent (March 25th) blog post on the topic, Digital central bank money for Europeans – getting ready for the future, in which he said, “…our responsibility to Europeans means that we must ensure our single currency is future-proof and fit for the digital age.” That suggests to me that they plan to go ahead with it eventually, they just have to make sure everything is in order.

Moves to realize a digital euro could in theory push the value of the euro up. Some people may think to buy euros now in the expectation that it’s like buying a stock before the IPO. If so, this would be a sorry, sorry mistake. Central bank digital currencies (CBDCs) will be designed not to make anyone money. Like the name says, they’re currencies for buying & selling stuff, not assets to invest in and get rich. You can’t HODL them in hopes that they moon. Nonetheless, the introduction of CBDCs is an exciting development. Check out my column on this subject, Digital Time in Europe.

US import prices are expected to rise sharply. The yoy rate of comparison is of course boosted by the fact that prices fell 2.4% mom in the like year-earlier period. But with China’s producer price index rising and freight costs rising too, we’ll probably see higher import prices for some time. Fed officials have said they’ll “look through” these base effects and temporary distortions, but will the market? The blasé reaction to yesterday’s higher-than-expected US consumer price index suggests that yes, the market agrees with the official view. 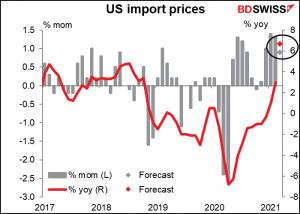 Speaking of Fed officials, Fed Chair Powell will take part in a virtual moderated Q&A session hosted by the Economic Club of Washington. No text. And Fed Vice Chair Clarida will discuss the new policy framework at a virtual event hosted by the Shadow FOMC. Oh, and NY Fed President Williams will take part in a virtual moderated discussion hosted by Rutgers Finance Society. I fully expect that they’ll repeat their usual line about how the economy is improving, but there’s much further to go, still lots of people unemployed, too early to think of withdrawing stimulus, will give lots of warning before we do, etc etc. Probably nothing new but it may move the markets anyway.

Around the same time, the Fed releases the “Summary of Commentary on Current Economic Conditions,” aka The Beige Book as always two weeks before the next meeting of the rate-setting Federal Open Market Committee (FOMC). It’s significant for the market because the first paragraph of the statement following each FOMC meeting tends to mirror the tone of the Beige Book’s characterization of the economy. The book doesn’t have any number attached to it that quantifies its contents, but many research firms do calculate a “Beige Book index” by counting how many times various words appear, such as “uncertain.” In any case, the book is largely anecdotal so you’ll just have to watch the headlines as they come out. This time the focus will probably be on employment: how many companies intend to hire more workers and what obstacles they’re finding. The Beige Book may be uniquely capable of answering the question, are the government’s unemployment payments discouraging people from going back to work?

Overnight, Australia releases its employment data. The number of people employed is forecast to rise and the unemployment rate is expected to fall by one tick. 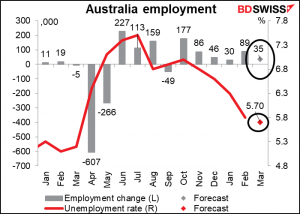 If the market consensus forecast is correct, Australia will have 13.042mn people working in March – higher than the 13.009mn who were employed in February 2020. Australia will be the first country that I know of to recover the pre-pandemic level of employment. (New Zealand may be getting there, but it only produces its employment data quarterly.) Of course more people have joined the labor force since then (13.812mn vs 13.704mn) because of natural population growth so the unemployment rate is still higher than it was before pandemic. 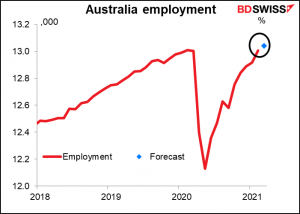 Nevertheless, the market will be waiting for the April employment data before getting excited, because the JobKeeper program, which paid employers to keep people in work, expired at the end of March. Only in April will we start to see what the “natural” rate of unemployment is in the country without support from the government. 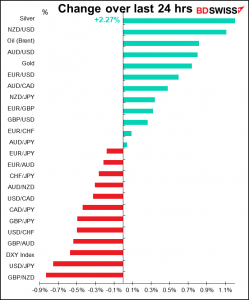