You are at:Home»MARKET PREVIEW»USD Continues to Climb, JPY Reverses; EU CPI, US GDP 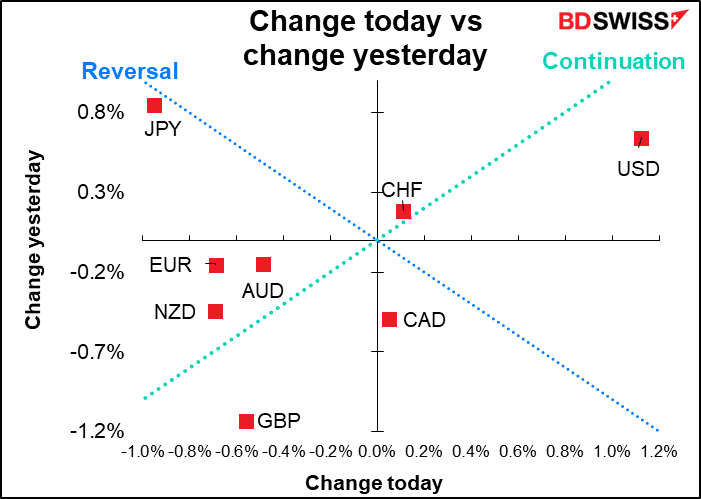 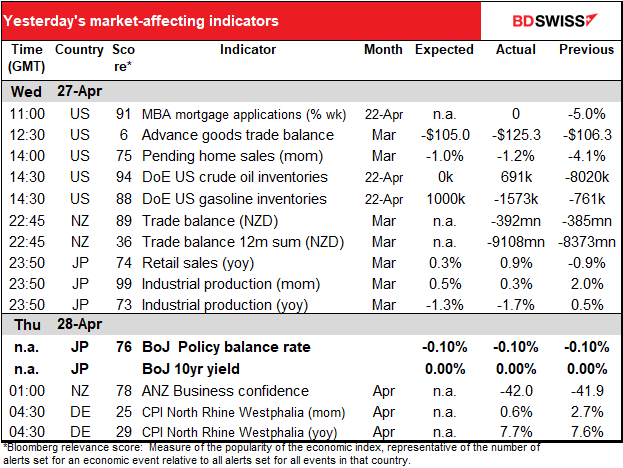 USD kept powering ahead as US yields rose further. The two-year yield, which is sensitive to expected changes in monetary policy, was up a particularly sharp 11 basis points (BPs) as the market continues to discount more and more Fed tightening. 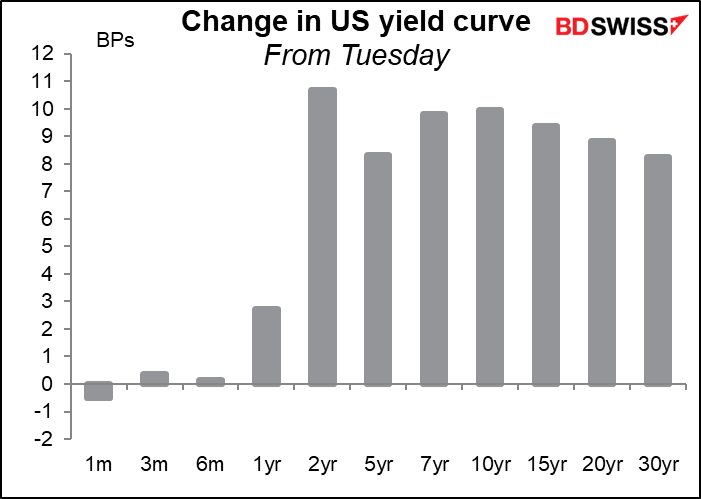 On the other hand, JPY reversed its gains from Tuesday and fell sharply after the Bank of Japan doubled down on its “yield curve control” (YCC) policy, in which the BoJ pledges to keep the 10-year Japanese government bond (JGB) yield within a range of ±0.25% of 0.0%. There was some thought that the BoJ might trim its forward guidance a bit at this meeting and take out some references to “additional easing measures” in order to relieve the pressure on the yen. On the contrary, the BoJ said it would “offer to purchase 10-year JGBs at 0.25 percent every business day through fixed-rate purchase operations, unless it is highly likely that no bids will be submitted.” Last month the BoJ just said that it would “purchase a necessary amount of Japanese government bonds (JGBs) without setting an upper limit so that 10-year JGB yields will remain at around zero percent.” 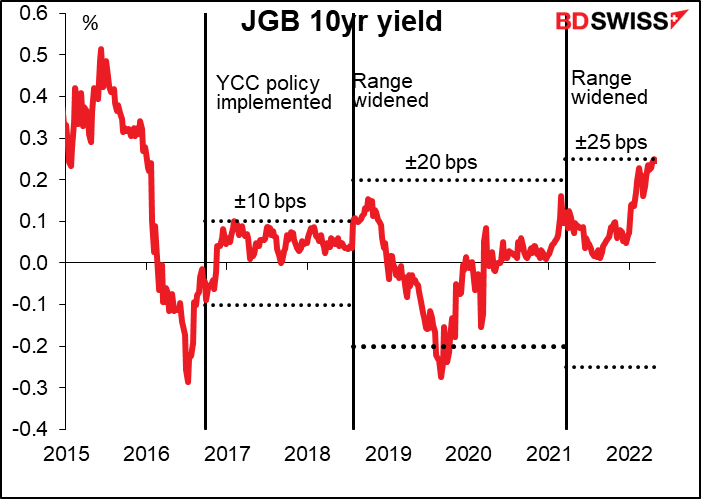 The contrast between the BoJ’s determination to keep rates from rising and the trend in virtually every other bond market in the world, particularly the US, is striking. This “monetary policy divergence” propelled USD/JPY over 1.30 this morning for the first time in almost exactly 20 years (April 23, 2002). 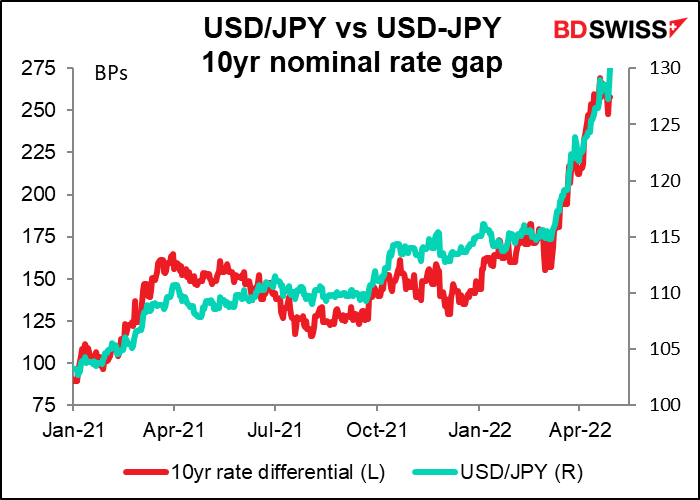 So long as the BoJ persists in this position, I can’t see any reason for JPY to strengthen. On the contrary it seems to me that the outflow from Japan is just likely to get greater and greater as the “yen carry trade” comes back into fashion. Although I have to say that it hasn’t shown up in the data yet – the data on securities purchases still shows an inflow of funds into Japan. Does that mean there’s something missing from the data (such as short-term flows) or does it mean that the deluge is yet to come? 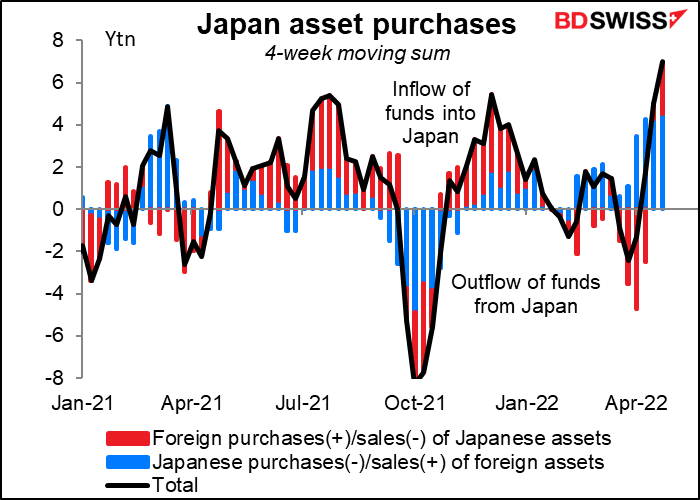 Meanwhile, EUR/USD fell below 1.06 for the first time since March 2017. European Central Bank (ECB) President Lagarde signaled that asset purchases will end “probably in July,” which is what several other ECB members have said, and notes that will also be the time to “look at interest rates and an increase in interest rates.” Nonetheless the market pared back the pricing of ECB “lift-off” in July somewhat. 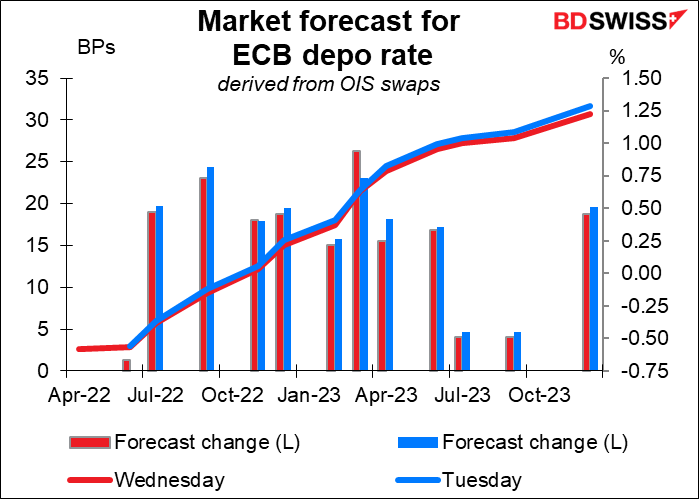 That’s because the market is focusing on possible Russian revenge moves in retaliation for European aid to Ukraine, such as the decision to halt gas supplies to Poland and Bulgaria. Natural gas futures opened some 40% higher yesterday although they’ve since come down considerably.

In other news, the US Senate confirmed Fed Gov. Lael Brainard as vice-chair of the Federal Reserve Board of Governors. 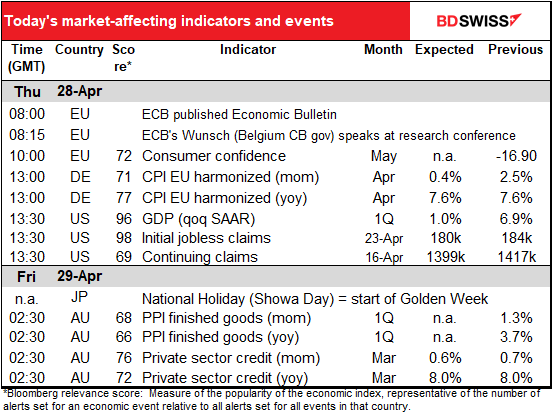 We got the North Rhine Westphalia consumer price index (CPI) early in the day, and the CPIs for the other lander have come dribbling out. We’ll now get the overall national German CPI.  The market expects the year-on-year rate of change of the headline figure to be unchanged. Does this mark the peak in German – and potentially EU-wide – inflation? 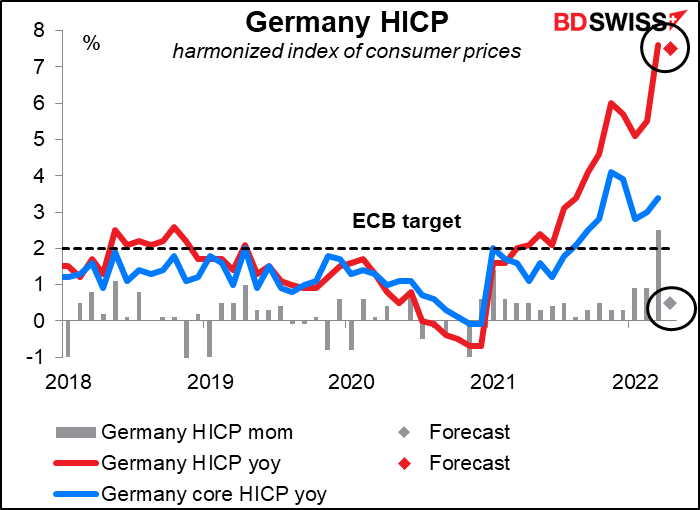 The annualized three-month rate of change is also expected to slow. This could be the beginning of a downturn in inflation. Nonetheless, I don’t think that would dissuade the European Central Bank (ECB) from tightening  – inflation is so much higher than their 2% target that a pause at this level is really irrelevant. 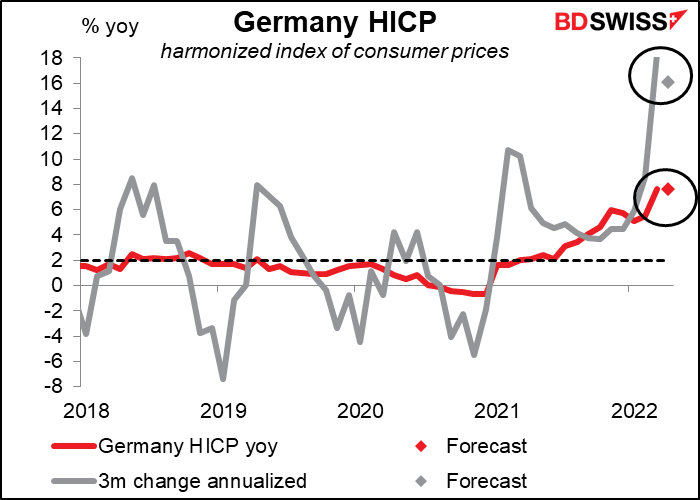 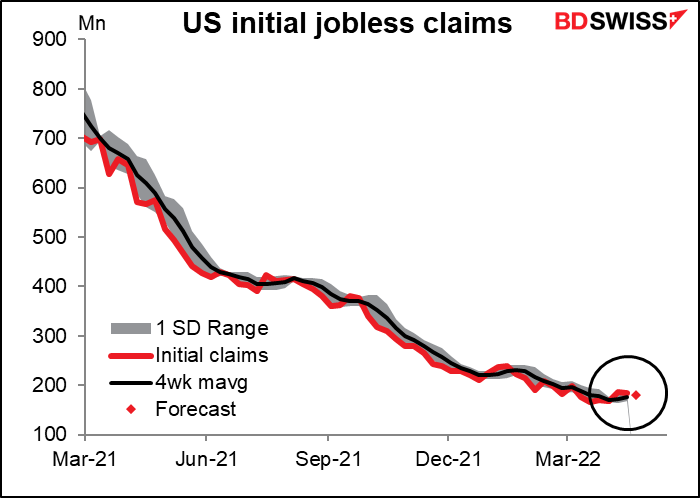 In theory, the official purpose of Showa Day is to attest to how Japan invaded China and South East Asia and caused untold suffering and death for millions oh sorry to “encourage public reflection of the turbulent 63 years of Hirohito’s reign.” Some people however think that commemorating Hirohito’s reign isn’t a good idea because Japan’s neighbors don’t necessarily share the Japanese’ people’s fondness for the late ichthyologist.

The fact is though that almost nobody in Japan cares what the holiday is about. It’s not like, “Oh, it’s Showa Day, so now we have to do X, Y, and Z and everyone eats special Showa Sushi.” Often people don’t even know which holiday they are observing; all they know is that they don’t have to go to work or school. It was convenient to keep observing Hirohito’s birthday even after he died because it comes at exactly the right time to start Golden Week, the holiday-studded week when everyone in the country can finally take a vacation. Today is Showa Day, next Tuesday is Constitution Memorial Day, Wednesday is Greenery Day, and Thursday is Children’s Day.  Many companies simply shut down for the week and let everyone have the week off, which may be the only time that many Japanese can take a week’s holiday.

Yes – it’s true. When I was working in Tokyo one of the people I worked with was sent to our Paris office for six months. Her husband, who worked at a Japanese firm, naturally wanted to go visit her and chose a time in November when she wouldn’t be busy. He was however refused permission to take holiday then because, his boss said, “that isn’t a time when many people take vacation.” One might’ve thought that was a good reason why he should be allowed to go, but “common sense” in Japan is different than elsewhere.

There are two second-tier indicators out from Australia, the producer price index (PPI) and private-sector credit.

Producer prices come out two days after the far-more-important consumer price index. That showed inflation leaping to 5.1% yoy from 3.5%, far above the market consensus forecast of 4.6%. There aren’t any forecasts for the PPI.

Australia is one of the few countries I’ve seen recently where the PPI is more or less in line with the CPI. PPIs generally are much higher than CPIs  EG in the US the CPI in March was +8.4% yoy and the PPI was +10.6%. Europe is even more extreme: the March CPI was +7.5% yoy while the February PPI was up an astonishing 31.4% yoy. Therefore, I wouldn’t be surprised to see a significant jump in the Austalia PPI this quarter. That could help to convince the Reserve Bank of Australia that inflation is “sustainably” within their 2%-3% target range and they can start hiking rates. The figure could therefore be positive for AUD. 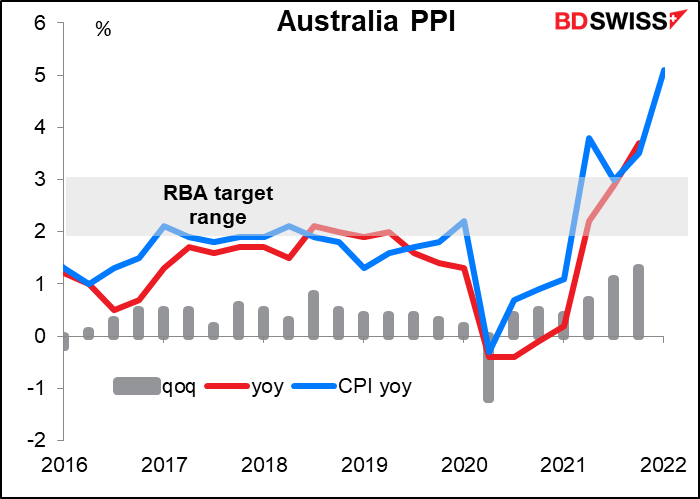 Meanwhile, growth in Australian private sector credit is expected to be more or less unchanged from the previous month and so probably won’t have that much impact on the market unless it turns out to be significantly different from the consensus. 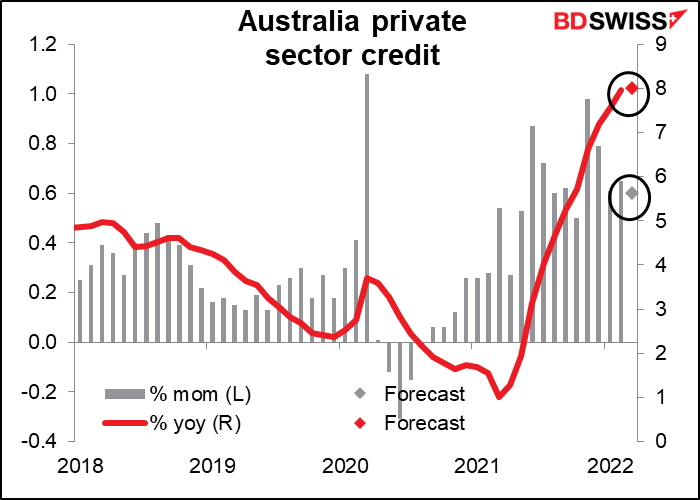 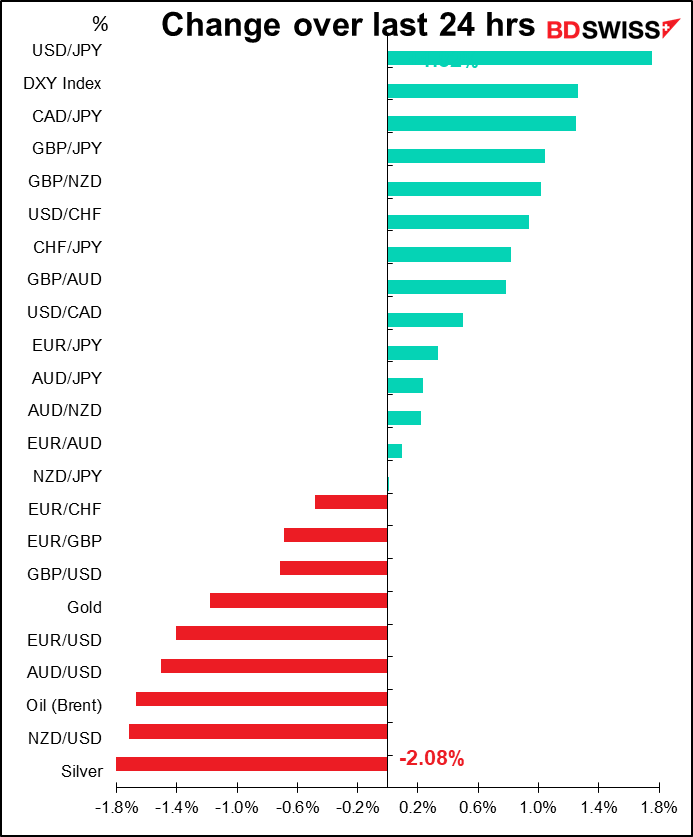