You are at:Home»Articles»These Major Fundamental Drivers Can Determine Gold Prices

Bullions are considered by most a stable investment, yet most of the fundamental and psychological factors that move gold prices (XAUUSD), are largely unknown or overlooked. In this article we will be looking at the five most common factors that can influence gold prices.

1. Monetary Policy Decisions by the Federal Reserve
Perhaps the biggest influencer for gold prices is U.S. monetary policy, which is controlled by the Federal Reserve. Changes in interest in particular have a big impact on gold prices. Lower interest rates tend to push gold prices higher because of what we call “opportunity cost.” Low interest rates often lead to a depreciation in the value of the dollar and push bond and CD yields lower. In this instance, foreign investors tend to flock to buy physical gold which becomes a cheaper and far more attractive investment opportunity. The same can be said of rising interest rates, which boost interest-bearing asset yields. In other words, investors would be more likely stay away from gold as the dollar denominated metal becomes too expensive to buy and hold. 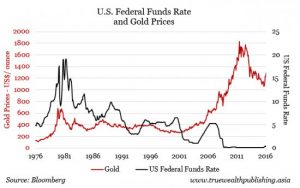 2. Economic data
Another driver of gold prices is U.S economic data, such as the jobs reports, wage data and manufacturing data, all of which influence the Federal Reserve’s monetary policy decisions. Though it’s not set in stone, a stronger U.S. economy pushes gold prices lower as it encourages the Federal Reserve to raise interest rates and tighten monetary policy. On the flipside, a weaker economy creates a dovish Fed scenario on interest rates and thus can cause gold prices to rise.

3. Inflation
Inflation is also an important catalyst when it comes to gold prices. Rising prices for goods and services tend to push gold prices higher, whereas lower levels of inflation or deflation weigh on gold. Inflation is a sign of economic growth and expansion but it also tends to cause the Federal Reserve to expand money supply. Expanding the money supply, dilutes the value of each existing dollar in circulation. A weaker dollar makes gold more attractive to foreign investors as it automatically becomes cheaper to buy and hold. This push-pull between interest rates and inflation can play a constant tug-of-war on gold prices.

5. Uncertainty
Lastly, the broad factor of uncertainty can also influence gold prices. Political uncertainty and instability can cause gold prices to rise. Uncertainty over Brexit negotiations, major elections and terrorist threats can cause investors to seek “safe-haven” assets that cannot lose their value overnight. Gold becomes an attractive alternative in these situations and the sudden increase in demand pushes XAUUSD prices higher. It should be noted however that uncertainty isn’t a quantifiable statistic, it is a psychological factor and as such it is subjective, and it can differ from one event to the next.