You are at:Home»MARKET PREVIEW»Safe havens down as stocks move up, CAD up on higher oil; US durable goods, oil inventories 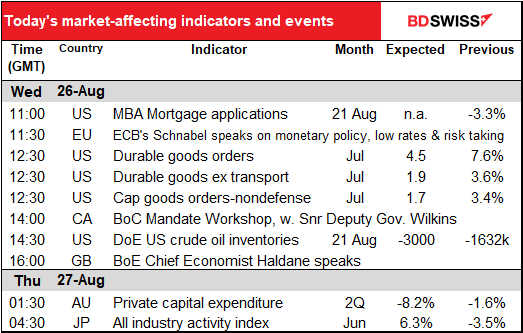 This has been the shortest bear market on record, which stands in contrast to the worst economic contraction on record. These two phenomena wouldn’t normally be expected to coincide. However there’s a third phenomenon going on, namely the largest expansion of government debt on record too, plus of course the lowest bond market yields on record as well. That may have something to do with it. 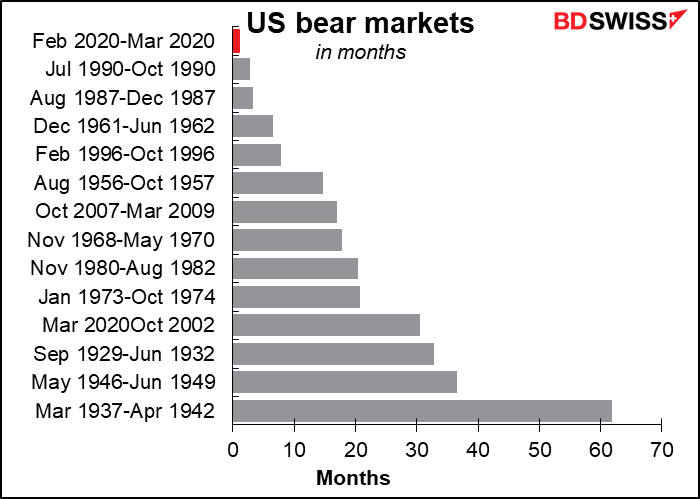 Using S&P 500 price return index. A bear market is defined as a 20% decline in the S&P 500 from its previous peak and ends when the index reaches its low and subsequently rises by 20%.

With stocks partying like there’s not a worry in sight, the safe-haven JPY and USD were the big underperformers.

CAD was the biggest outperformer as oil prices moved higher in reaction to storms in the Gulf of Mexico. The Gulf area is home to over 15% of US oil production and nearly half of all US refineries. Oil production has stopped and more than half a million people evacuated as Hurricane Laura was projected to develop into a Category 3 major hurricane before landfall. A Category 3 storm is one with winds of 178-208 km/h (111-129 mph) that is expected to inflict “devastating damage.”

With so much refining capacity taken out, the distillate and gasoline sections of today’s US Department of Energy oil inventory figures will be in focus — see below for details.

Getting back to Canada, Bank of Canada Deputy Governor Schembri spoke on “The gap between inflation perceptions and reality.” Nothing of market-moving importance in the speech, but in the Q&A he noted that the Bank of Canada is considering average inflation targeting in its framework review, which will be concluded next year. Perhaps we’ll hear more about that today from Senior Deputy Gov. Wilkins and others at their Mandate Workshop (live streamed on the Bank’s website) or from Gov. Macklem, who will speak tomorrow at the Jackson Hole symposium.

Yesterday’s data on US new home sales massively exceeded estimates (as has much of the US housing data), and the Richmond Fed index also beat estimates, the first of the regional Fed indices this month to do so. But the Conference Board consumer confidence index unexpectedly fell to a new post-COVID-19 low as the job picture deteriorated once again. 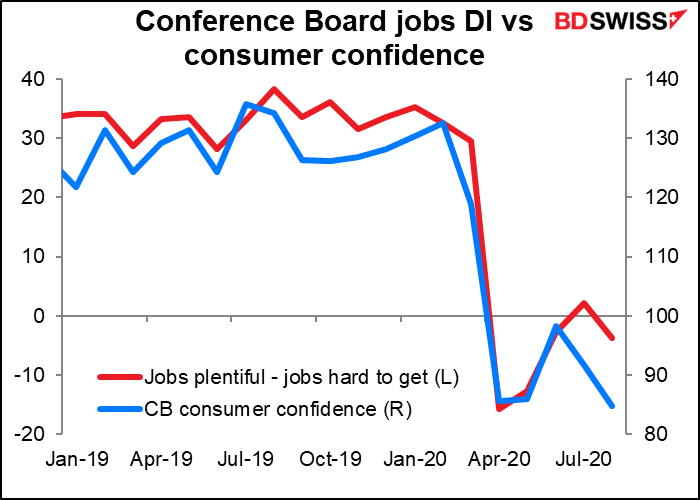 The data are worrisome for two reasons. First, the overall deterioration in consumer sentiment calls into question the strength of the recovery from now. Secondly, the Conference Board jobs DI has been a reliable leading indicator of the unemployment rate for many years. The US labor market may be turning down again, with a possible nasty surprise at next week’s US nonfarm payrolls. 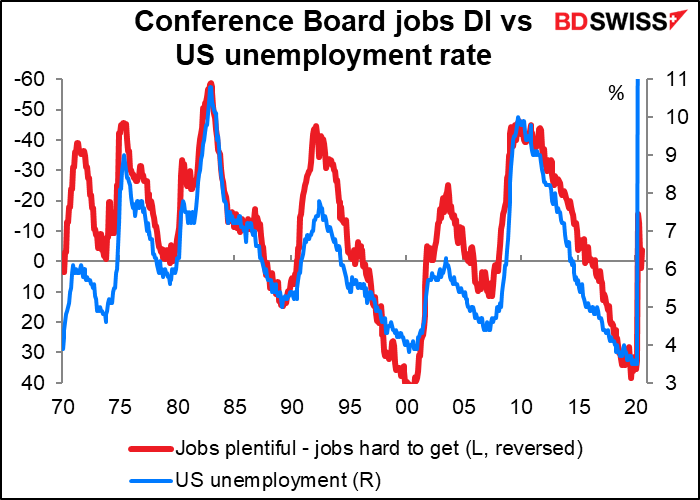 Just FYI, there was a letter-to-the-editor in the Times saying that someone was talking with Dominic Cummings’ father-in-law, who revealed that UK PM Boris Johnson was still suffering the aftereffects of COVID-19 and would step down as PM in six months. Of course this is just “I heard this from someone who heard this from someone who heard this from…” but I bring it to your attention anyway because most professionals in the UK will have heard the rumor by now. Six months would be after Brexit so after the damage is done.

I expect a quiet day today as investors refrain from taking big positions ahead of tomorrow’s all-important virtual Jackson Hole Symposium and Fed Chair Powell’s big speech in the US morning.

Nothing out during the European day today.

US mortgage applications continue to soar as housing booms. No forecast. 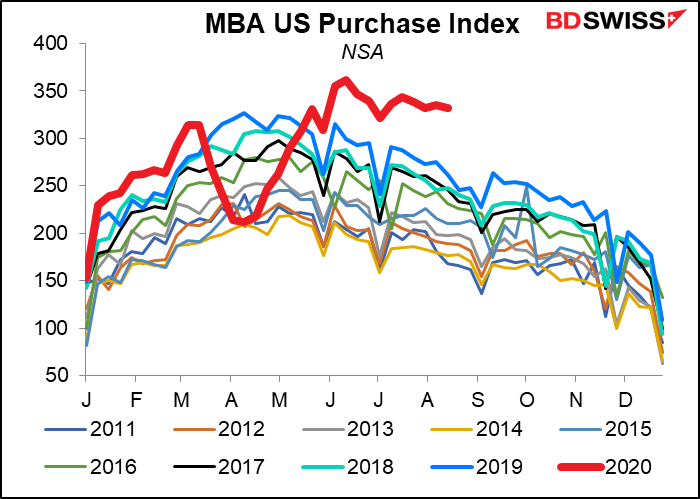 US durable goods are expected to be back above March levels, although not yet back to pre-pandemic levels. Manufacturing has rebounded faster than services simply because social distancing is easier to arrange on an assembly line than in a bar.

The headline figure should get a boost as auto production comes back. 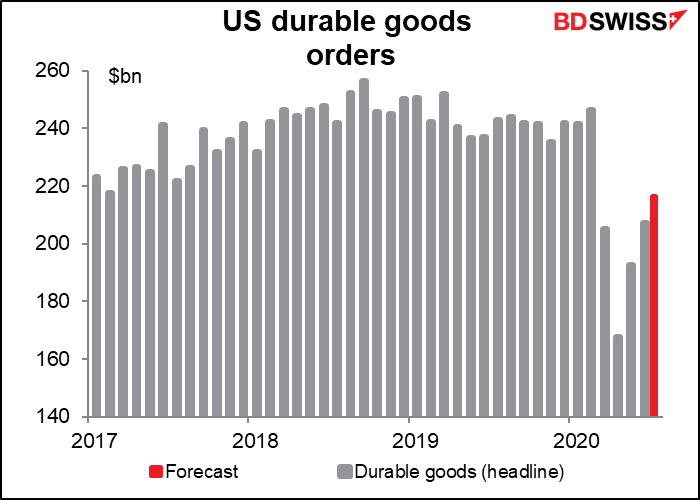 The series excluding autos and other transportation equipment has come back even faster. 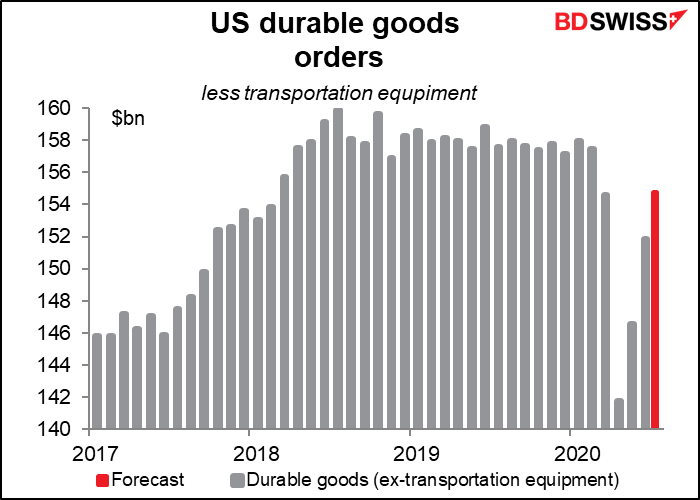 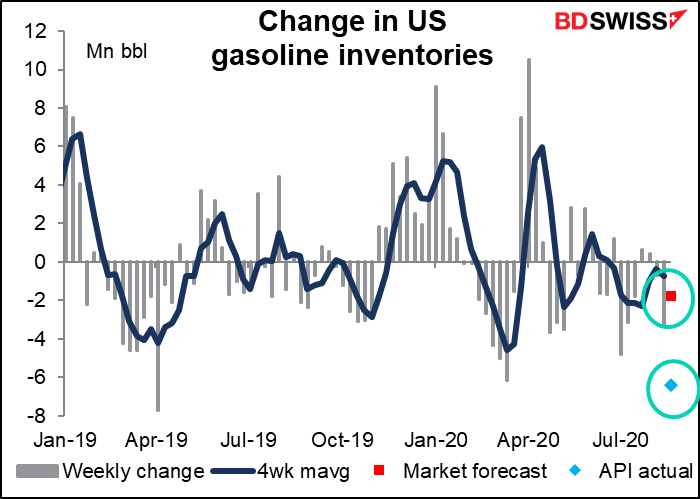 Overnight, Australian new capital expenditure for 2Q is expected to plunge 8.2% qoq, which much to my surprise would not be the worst on record – that -8.6% qoq in Q3 2015. (Sorry, no idea why it collapsed then.) But I think everyone expects Q2 to be abysmal, so no surprise. 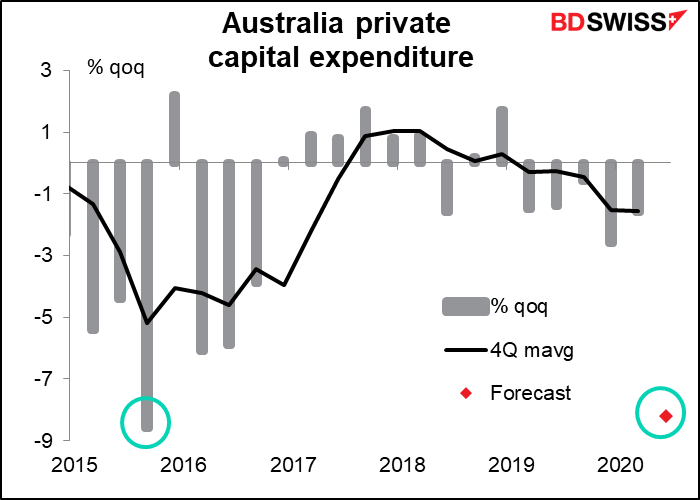 The key point will be the third estimate of capex spending for 2020/21. Usually – in fact always since 1999 – the third estimate has been higher than the second estimate, by an average of 11%. Since the second estimate was AUD 90.9bn, that would imply a new estimate of AUD 100.90bn. But businesses have been cutting all non-essential investment to preserve cash flow and just survive, especially outside the mining sector. The focus will be on whether the whole-year investment plans are revised up again, stay flat or (shudder!) are revised down, which would be extremely negative for AUD, in my view. Also people who are really interested in this kind of thing will be looking at how much of the investment is in mining (which is obviously a function of the global picture) and how much in other businesses (which are more a function of the domestic Australian economy).

Japan’s all-industries index is expected to record yet another absurd move in percentage terms. The previous record highs were mostly around hikes in the consumption tax, such as in April 1997 and October 2019. People stock up the month before the tax goes up, then consumption crashes the first month it’s in effect, then it rebounds 2.3% mom-2.5% mom from that very depressed level the next month. The forecast +6.3% mom increase this month is simply unheard of and is only matched in magnitude by the 7.1% mom plunge that occurred when the Fukushima nuclear power plant was destroyed in March 2011. 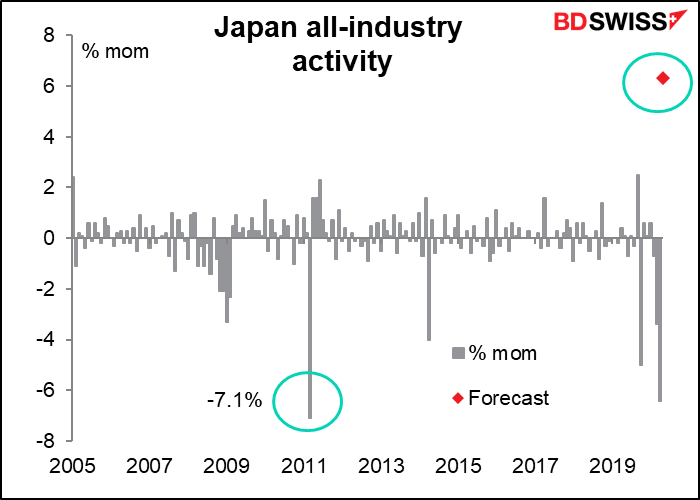 When we translate this back into the index level, we can suddenly see why the Japan purchasing managers’ indices are still both below 50: the country is really doing badly. Even the forecast rise would leave activity 8.8% below the average level of January & February. 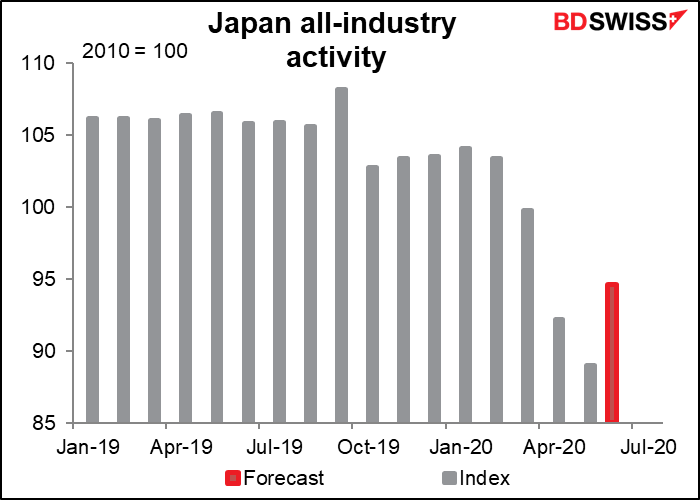 In any event, I’m not sure how much this matters for the FX market. The evidence suggests that relative growth rates or, more accurately, expectations of growth rates don’t play a major role in determining USD/JPY, unlike with EUR/USD, for example. 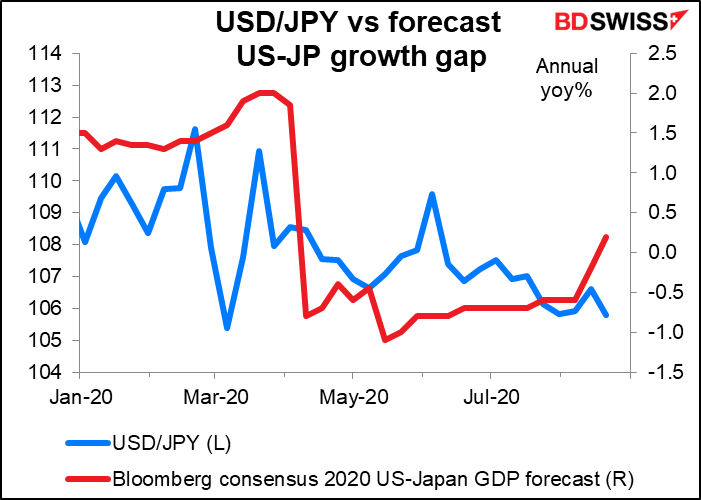 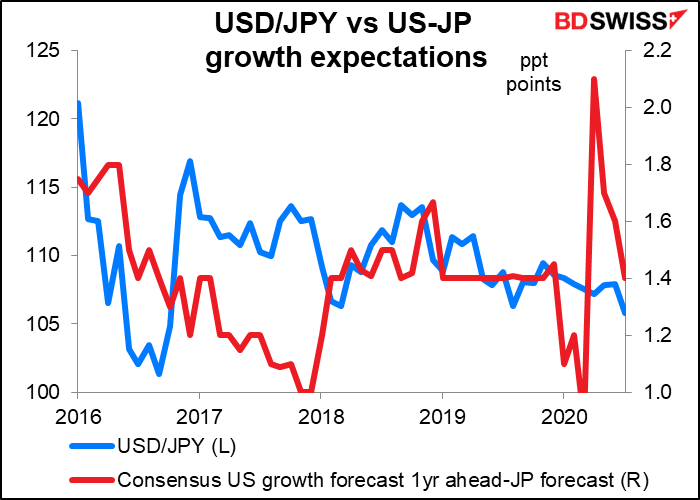 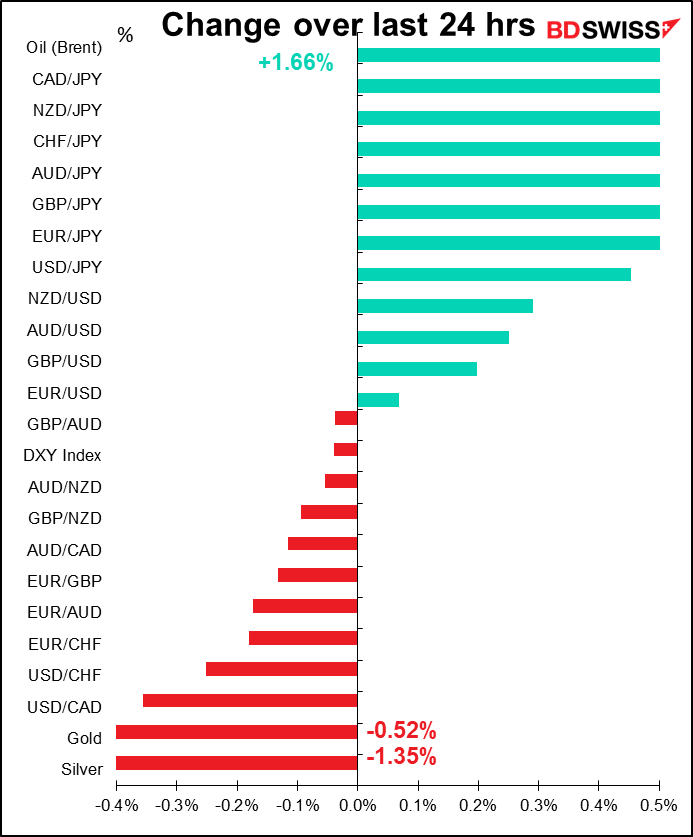