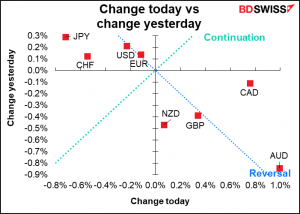 A day of reversals as the best-performing currencies yesterday were the worst today and vice-versa. What I’ve called a “Matthew market” after Matthew 20:16: So the last shall be first, and the first last…

Part of the recovery is no doubt due to growing optimism about the Omicron variant, which may be extremely contagious but doesn’t seem to be extremely dangerous. That spurred a revival in risk sentiment, which was said to be the reason behind a sharp rise in oil prices, which boosted CAD.

(Nonetheless, before we get too excited, we should note that the global case count has been rising for seven weeks in a row and some places are cracking down – New York for example is introducing some tougher measures.) 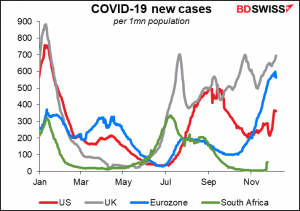 With optimism improving, inflation expectations also rose  as a result – higher oil prices and less need for lockdowns and other measures that would dampen economic activity.

Risk sentiment was also helped by policy easing in China. The People’s Bank of China (PBoC) Monday said it would cut the reserve requirement ratio (RRR) for major commercial banks by 0.5 percentage point, releasing CNY 1.2tn worth of long-term liquidity into the interbank system to support  the Chinese economy. This was the second RRR cut this year. 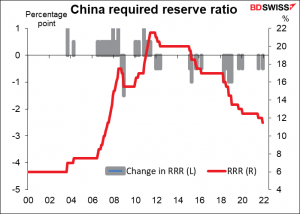 Looser monetary conditions in China tend to be good for economic activity globally, as well as in China too of course. (The credit impulse is derived by taking the annual change in the flow – rather than the stock – of credit to firms and households. In other words, it measures the pace at which the flow of credit is growing.) 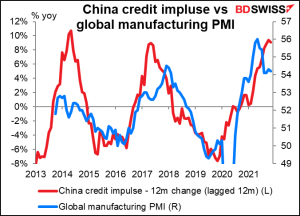 In particular, increased economic activity in China tends to boost the price of commodities while reducing the price of trade goods. This tends to improve Australia’s terms of trade, which is normally good for AUD. 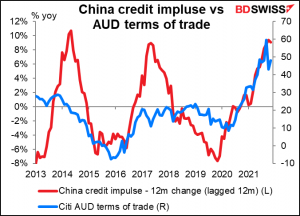 Oddly enough, the move seems to have encouraged other markets more than China however. Both Shanghai and Shenzhen markets were down on Monday and Tuesday. On the other hand, the S&P 500 closed up 1.2% with over 85% of the index members rising, and Tokyo’s Nikkei index was up 2.4% today. At the time of writing the S&P 500 is indicated to open up 0.6%.

Speaking of AUD, The Reserve Bank of Australia (RBA) didn’t make that many material changes in its statement, but it did make one significant change: it eliminated the forecast for when it expected it would be able to start hiking rates. That means they’re allowing for the possibility that they start raising rates earlier than they had previously expected.

The determining factor for the RBA is wages growth, and there they seem to be open to the possibility that things develop better than they expected. They said that “Leading indicators point to a strong recovery in the labour market.” “A further pick-up in wages growth is expected as the labour market tightens. This pick-up is expected to be only gradual, although there is uncertainty about the behaviour of wages as the unemployment rate declines to historically low levels.” If they’re uncertain about the behavior of wages and they believe higher wage growth is necessary to achieve inflation sustainably above their target level, then they must be uncertain about the prospects for inflation. In this case “uncertainty” means “could be higher than we previously expected.”

(For those who are interested in the details, the forward guidance previously read, “The Board will not increase the cash rate until actual inflation is sustainably within the 2 to 3 per cent target range. This will require the labour market to be tight enough to generate wages growth that is materially higher than it is currently. This is likely to take some time. The Board is prepared to be patient, with the central forecast being for underlying inflation to be no higher than 2½ per cent at the end of 2023 and for only a gradual increase in wages growth.”

This month’s guidance was the same except they cut out the section in bold.)

In other news, in Germany the Greens yesterday were the last of the three members of the “traffic light coalition” to approve the new coalition agreement. The parties will sign the agreement today and SPD head Olaf Scholz become chancellor tomorrow in a Bundestag vote that will bring a close Chancellor Merkel’s 16-year tenure. 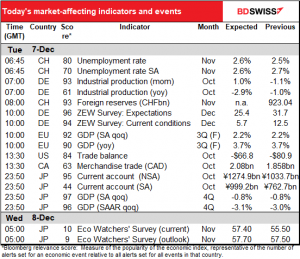 We discussed German industrial production yesterday, but didn’t have the factory orders figures on hand when we did. Oddly enough the market consensus for IP was revised up a bit (to +1.0% mom from +0.9%) even though factory orders were a pathetic disaster — 6.9% mom vs market estimates of -0.3%. 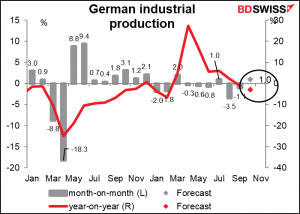 Using the trendline back from 2014, a figure like that would give an industrial production number closer to -4.6% mom. Oddly enough I tried leading the factory orders on the assumption that say this month’s orders would determine next month’s production, but it doesn’t seem to work like that – the correlation was best for the same month. Although as you can see from the chart it’s hardly cast in stone, there are many months when one is up and the other is down. In any event I wouldn’t be surprised at a negative surprise, if that makes sense – or maybe it would be better to say I think the market consensus is on the high side. (FYI estimates range from -0.7% to +4.3%, so I’m definitely on the low side.) 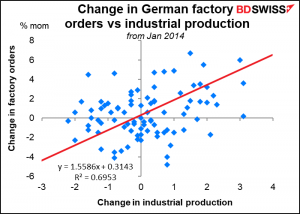 Every month when I do the Swiss foreign exchange reserves I point out that they aren’t as good as the Swiss sight deposits for estimating Swiss National Bank FX market intervention, because the FX reserve data is affected by currency valuation changes. Please bear that in mind as you contemplate the figures. 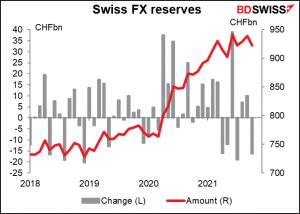 I doubt if it would surprise anyone if the ZEW survey showed a decline in sentiment this month. This is a survey of analysts and economists and other such pundits who no doubt know what’s happening with the virus. 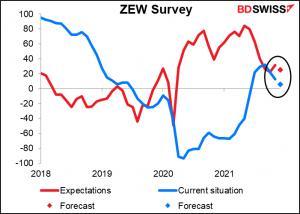 In fact, again I wouldn’t be surprised if it fell more than the market is looking for. 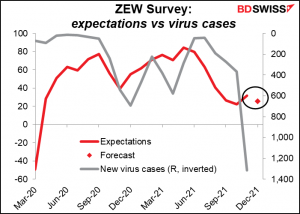 No change is likely in the 3rd and final estimate of EU Q3 GDP so we can give that one a miss.

Next up we have trade figures from the US and Canada.

The US trade deficit is forecast to shrink noticeably. As the blue line (merchandise trade) shows, that’s because of trade in goods. 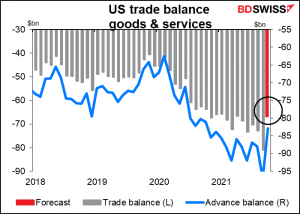 What’s caused the sharp reversal in the trade deficit? We don’t have all the figures for September yet, but what we do have indicates that the capital goods deficit narrowed and the “industrial supplies & materials” surplus rose. 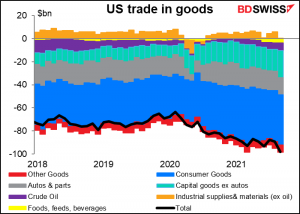 Canada’s trade surplus is expected to rise further. It’s been on a tear recently, probably a counterpart of the widening US trade deficit. 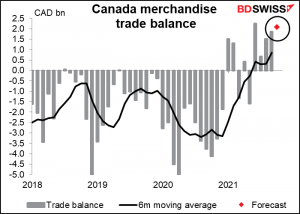 Meanwhile, Japan’s current account balance is expected to improve too, both on a seasonally adjusted and unadjusted basis. 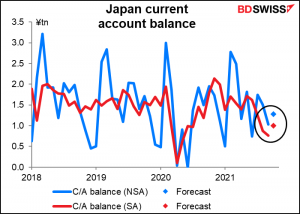 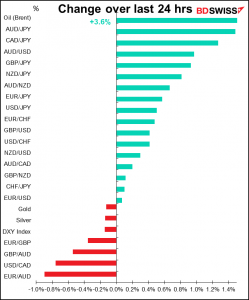