You are at:Home»MARKET PREVIEW»“Risk-on” Mood Despite Record NFP = AUD Up, JPY Down 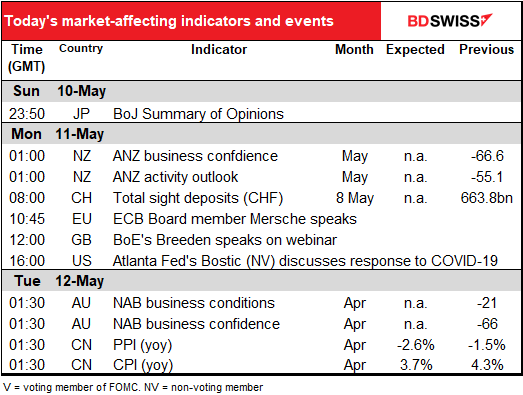 An astonishing disconnect between economic statistics and the markets – Wall Street closes up 1.7% on the day that the absolute worst employment data we’ve ever seen – and, one assumes, that we ever will see – is announced. (The front page of the New York Times captured it well – that’s Friday’s figure going down the entire right-hand side of the front page.) I suppose one could say that it’s because the figure wasn’t as bad as expected — -20.5mn jobs vs the consensus of -22.0mn and an unemployment rate of 14.7% vs 16.0% expected  – but that seems hardly significant, given the uncertainty surrounding this month’s figure and the near-certainty that next month will also be horrendous. Furthermore, the Department of Labor pointed out that the response rate to the household survey, which is where the unemployment rate comes from, was much lower than normal and that unadjusted unemployment would have been nearly 5 ppt higher had workers been classified as “unemployed on temporary layoff” as opposed to “employed but absent from work.” In any event, the market’s reaction probably shows more faith in the Fed and the power of liquidity than confidence in P/E ratios or any other rational measures of market value. 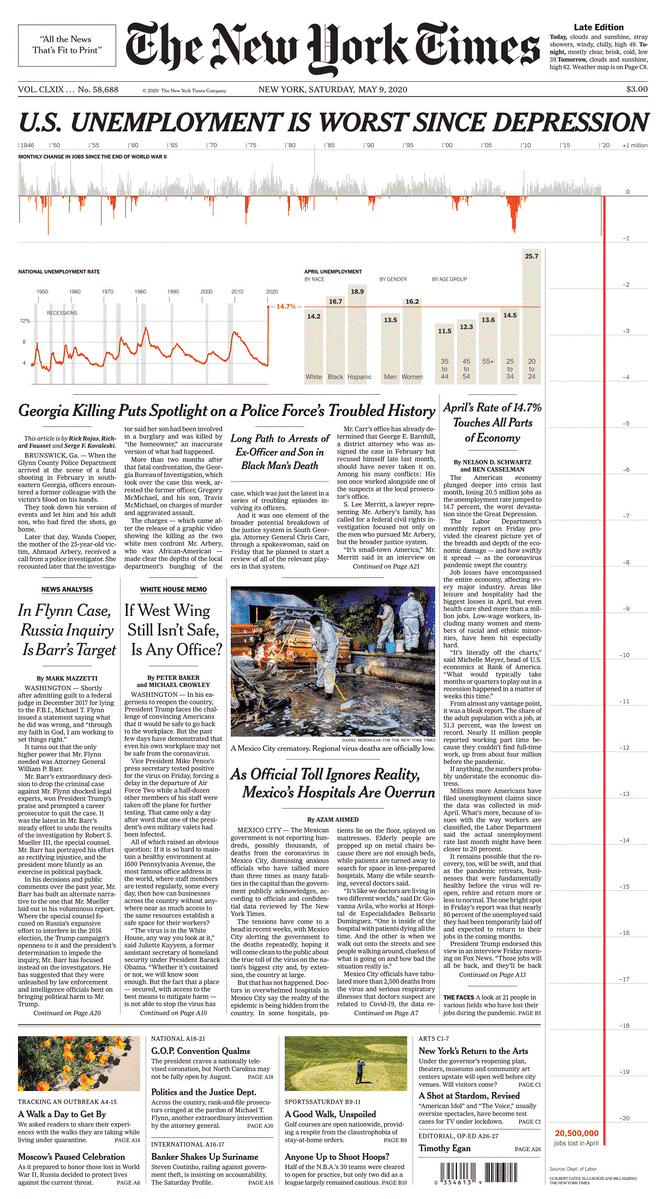 Commodity currencies did well in this risk-on environment. AUD was particularly supported by Friday’s announcement from the Australian governments of a three-phase plan to reopen the economy by July. 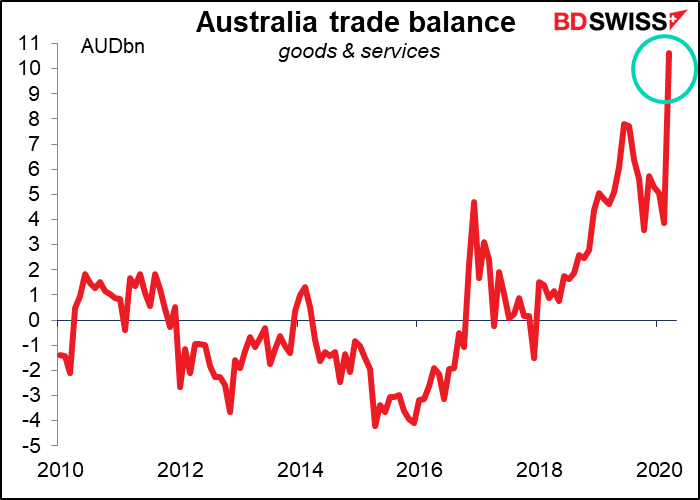 The weekly ANZ Roy Morgan consumer confidence index has regained about half of what it lost in the wake of the lockdown. 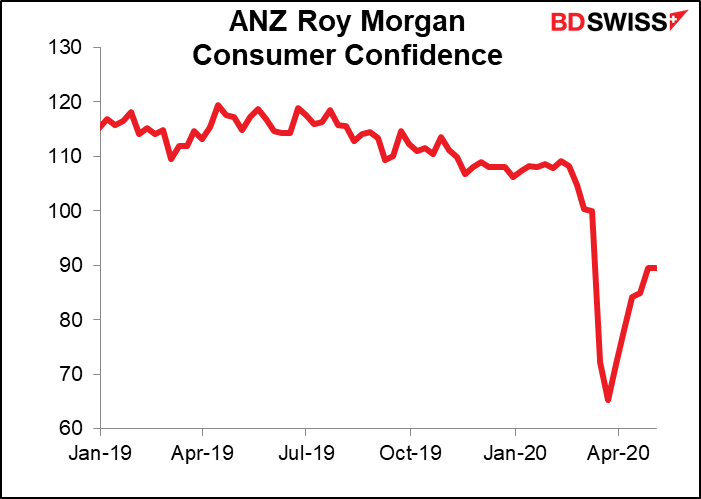 And building approvals didn’t fall that much, either. In fact, while the economic indicator surprise index for the major economies overall is hitting a record low (data back to 2003), that for Australia is nearing the highest it’s been since the bubble years of 2006! 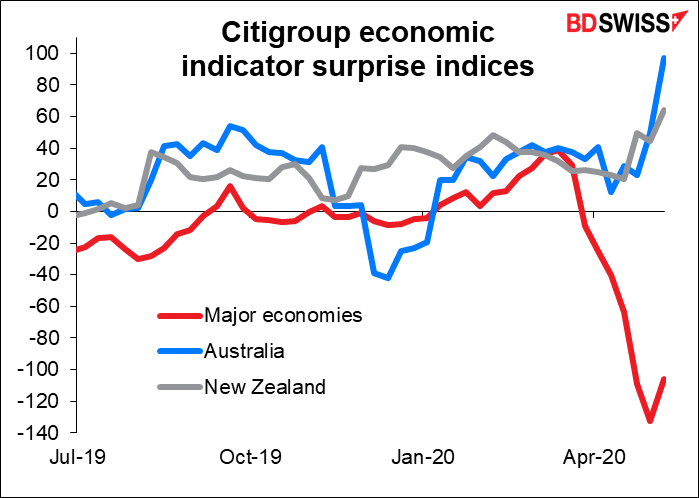 New Zealand’s economic indicators are also surprising on the upside = not as bad as expected. This is particularly surprising as New Zealand was the country to go into the most stringent lockdown early on.

AUD has already recovered somewhat. As New Zealand goes from most locked-down to one of the least, NZD could gain against AUD, particularly as there’s the likelihood of more fiscal easing from New Zealand when the budget is announced on 14 May.

Good Europeans at work! The German representative to the European Parliament’s Committee on Economic and Monetary Affairs wrote a letter to European Commission (EC) President Von Der Leyen (also German) complaining about the German Constitutional Court’s ruling against the European Central Bank (ECB’s) quantitative easing program. In response, Von Der Leyen said that the EC are “considering possible next steps, including infringement proceedings” against the German Constitutional Court. So for these people, Europe trumps Germany. I firmly believe that at the end of the day, the EU won’t allow a national court to undermine the decisions of the European Court of Justice, lest it unleash 27 challenges to every ruling (27 = one from each EU country). Nonetheless, it will take months of legal and political wrangling to establish that principle, and during that time the struggle will badly undermine Europe’s efforts to fight the virus crisis. Furthermore, it opens a new era of scrutiny of ECB actions that could in some ways change how the ECB operates. In particular, the ECB may face pressure to reimpose limits on how much of each country’s bonds the EUR 750bn Pandemic Emergency Purchasing Program (PEPP) can purchase in order to continue with it unhindered. This could result in less purchases of Italian bonds and wider peripheral spreads, which would harm Italy’s economy. At the very least, politicians are bound to start bitter disputes over its independence.

Oil continued to rise amidst signs that OPEC+ countries are cutting production and the market is delivering lower US output. Friday’s Baker Hughes rig count hit a record low (data going back to 1987) as US drillers shut down another 34 rigs during the week. Since mid-March the number of oil and gas rigs has fallen by 419 or 53%. 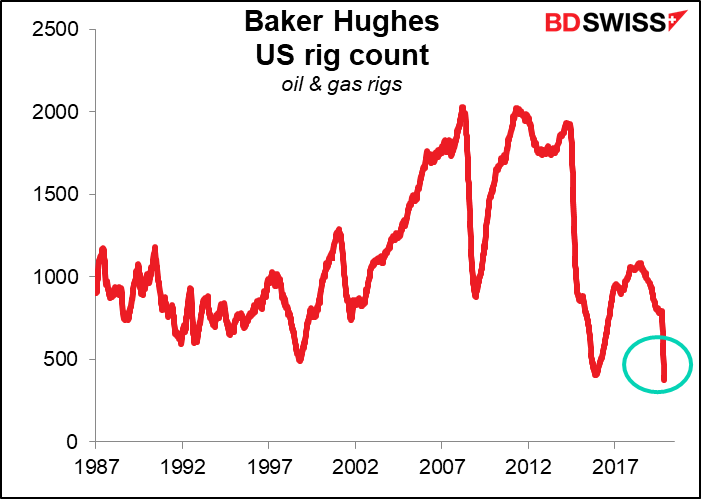 The UK published its negotiating agenda ahead of this week’s third round of talks with the EU, although Ireland Deputy PM Coveney commented that thanks to the pandemic, a transition agreement by year-end appeared “virtually impossible”.

Speculators are a bit more consistent in their views this week: more long DXY, less long currencies. The biggest change was in a reduction in long JPY positions, followed by an increase in short GBP, then the reduction in long EUR. Specs are still distinguishing among the commodity currencies:  added to shorts in CAD and NZD but cut shorts in AUD.

They reduced longs in both precious metals and added to shorts in copper (which was probably a mistake). 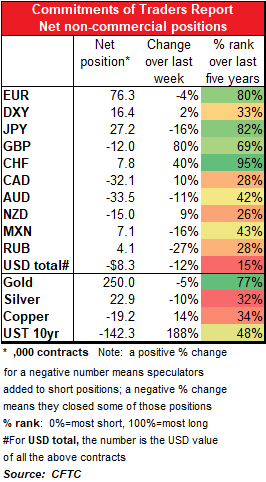 There’s virtually nothing on the schedule today during the European and US days, just the usual weekly Swiss sight deposit data. Switzerland has been intervening in higher and higher amounts just to keep EUR/CHF stable. Will they increase their efforts or will they allow EUR/CHF to move down? 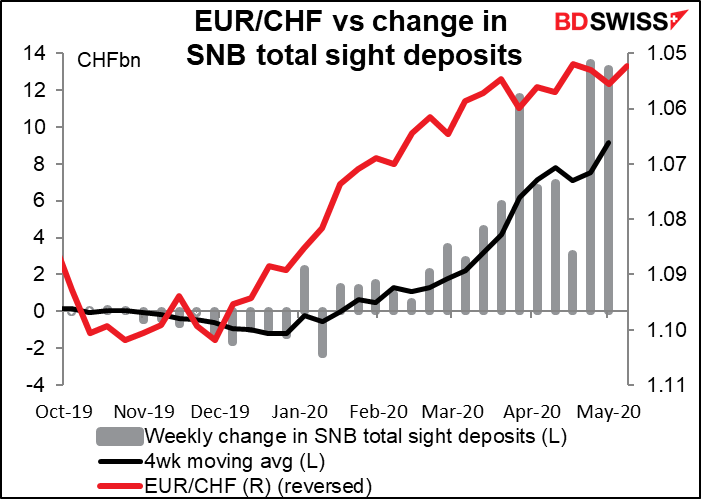 Overnight, China announces its consumer price index (CPI) & producer price index (PPI). The PPI is of more interest to us, because a lot of the CPI is food, which China doesn’t export, whereas the PPI is basically the same as China’s export prices, which form a large part of import prices for many countries.Besides, China’s data now is a harbinger of the rest of the world’s data in a few months, and what it shows is diminishing inflationary pressures, particularly at the factory gate level, where prices are falling. Deflation, here we come! The news is likely to add to the feeling that central banks are going to remain at zero indefinitely. 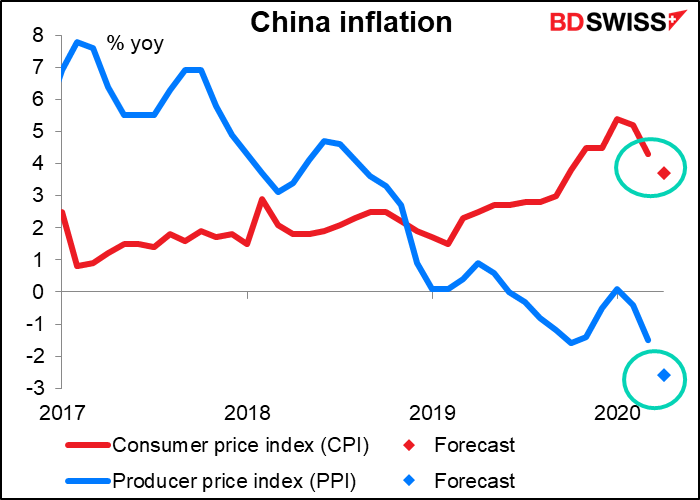 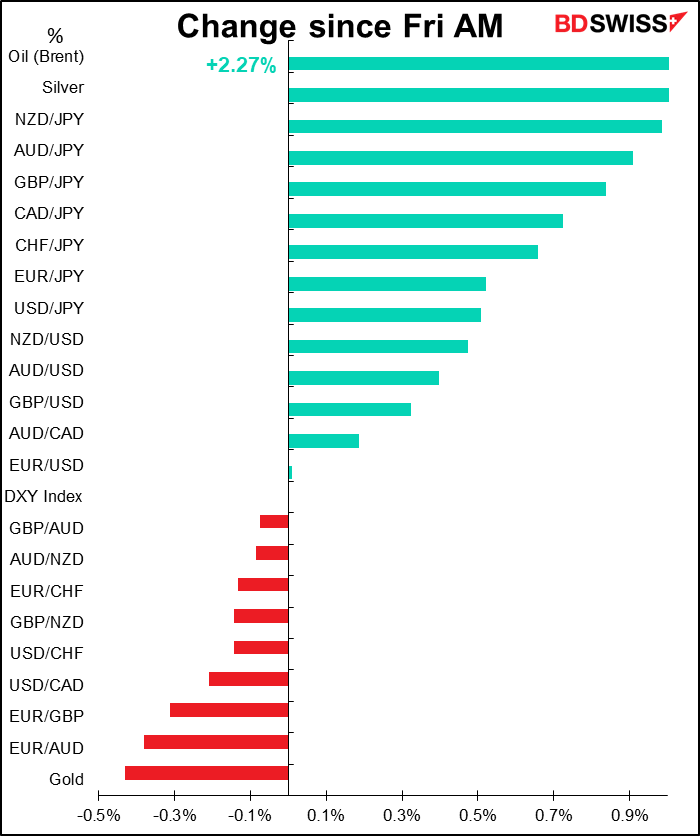