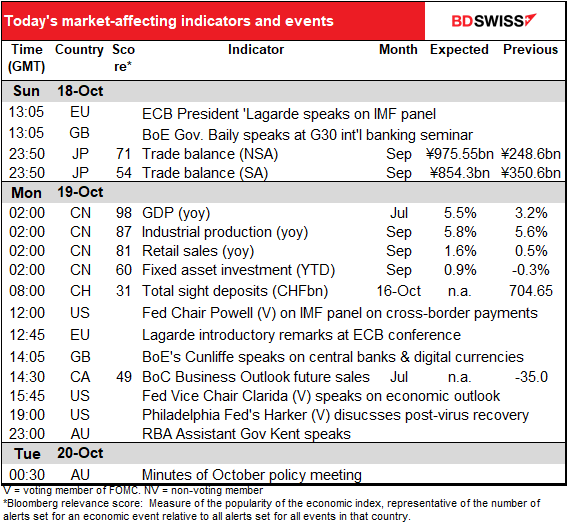 I just want to point out two things for my non-US readers, who may not be following the US elections that closely.

The early voting is an excellent development because it makes it more likely that a definitive result will be available earlier. That reduces the scope for Trump to claim “cheating” or “rigged election” and try diversionary and delaying strategies that will increase uncertainty. 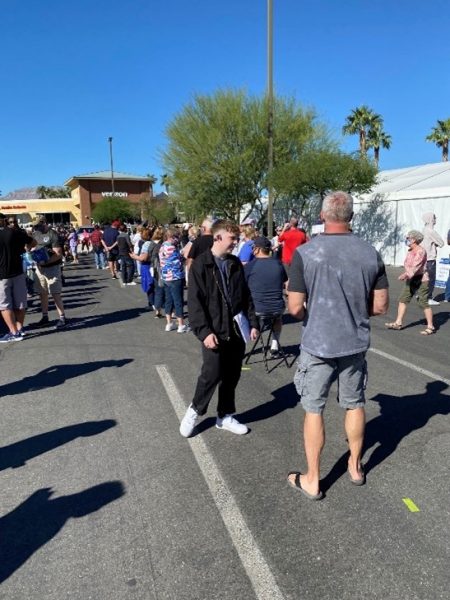 2.As an indication of just how crazy some people in the US are:  this meme was going around on the internet recently. John F. Kennedy Jr., President Kennedy’s son, died in an airplane crash back in 1999. Yet some people are circulating the rumor – and others are believing it! – that he’s been in hiding all this time and will come back and be Trump’s running mate., never mind that the Kennedys are the family that’s most closely associated with the Democratic Party, nor that Pence is already on the ballot and couldn’t be replaced by anyone at this point. It shows the credulity that characterizes some Trump supporters nowadays (and I’m sure some on the Left too, no doubt).. 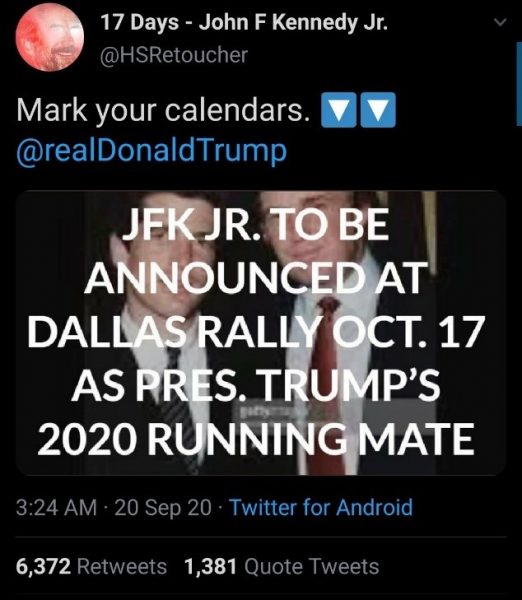 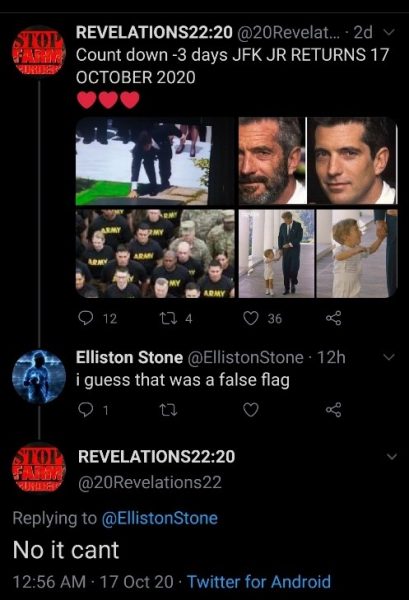 Currencies were little changed overall in a generally “risk-on” environment.

This morning China’s GDP figure disappointed the market as +2.7% qoq (+3.3% expected), but industrial production and retail sales both beat estimates, which was seen as more important. They are probably more reliable than the GDP figure and beside, they’re more up-to-date.

NZ election:  In New Zealand, the Labour Party won a majority in Parliament, the first parliamentary majority for a single party since the proportional electoral system was introduced in 1996. The fact that it won a majority by itself and therefore doesn’t have to rely on the Green Party, which is perceived as anti-business, should be a positive for sentiment. All that is a positive for NZD. On the other hand, it also indicates no change at the central bank, which means continued experiments with extraordinary monetary policies, a negative for the currency. All told though the reduction in uncertainty and greater ease of governing for an administration that’s generally seen as quite competent, particularly with regards to handling the virus, is positive for  NZD.

House Speaker Pelosi Sunday said they’d have to reach agreement on a stimulus bill by Tuesday in order for Congress to pass legislation before Election Day, but she noted that significant differences remain. I don’t think the differences can be bridged in this short a time. Is there anyone left who expects a bill? I think this is part of the Republican “scorched earth” plan, that is, to leave the US economy in as bad a shape as possible for the incoming Democratic administration.

CAD was the best-performing currency for reasons that escape me totally. Bloomberg costs over $2,000 a month but they don’t bother covering the foreign exchange market as a whole, only a few select currencies. As far as I could tell they only talk about CAD in the “Inside Canada” column, and that’s from Friday morning. Even that didn’t explain the rise, which doesn’t seem to have any specific trigger. On the contrary, all the factors stacked up against CAD: PM Trudeau last week said he would extend a ban on Americans entering the country when the current closure agreement expires this week, and Friday’s manufacturing sales were weaker than expected (-2.0% mom vs -1.4% expected, although that came after three months of strong rises). Oil, while higher, wasn’t significantly higher (+0.4%), and foreign purchase of Canadian bond were a bit above the recent average but not spectacularly so. My guess? Just the general “risk-on” environment pushing money into the commodity currencies. 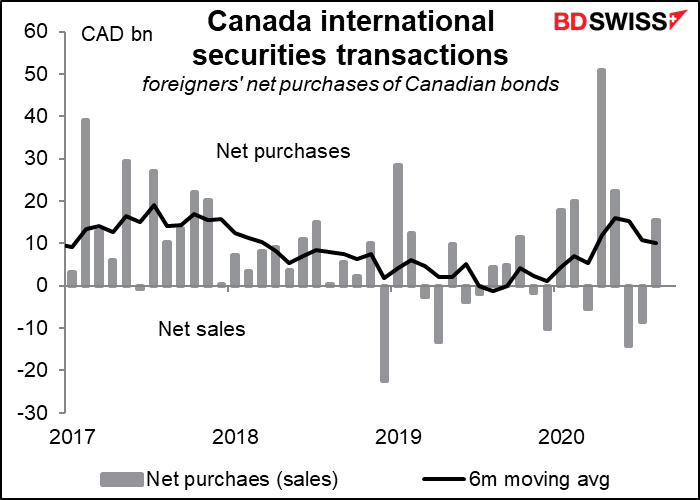 Not much on during the European day. One thing to watch:  the UK Internal Market Bill starts its way through the House of Lords today. This is the bill that says “we have the right to break our agreement with the EU if we want,” which naturally annoyed the EU no end. In passing the bill, the Lords may remove the offending clauses. That would force PM Johnson to decide whether he wants to fight to keep those clauses in. He could decide to drop them or water them down to ensure that the bill gets passed, which would make an agreement more likely.

It looks like the Swiss National Bank (SNB) didn’t intervene in the FX market in the week ended 9 October, and EUR/CHF moved down (i.e., CHF strengthened vs EUR). It continued to do so during the latest week. If it turns out they haven’t intervened again, it would suggest that they’re getting nervous about the US accusing them of manipulating their currency (which of course they admit they’re doing) and are stepping back a bit. That might be a signal that EUR/CHF is headed lower. 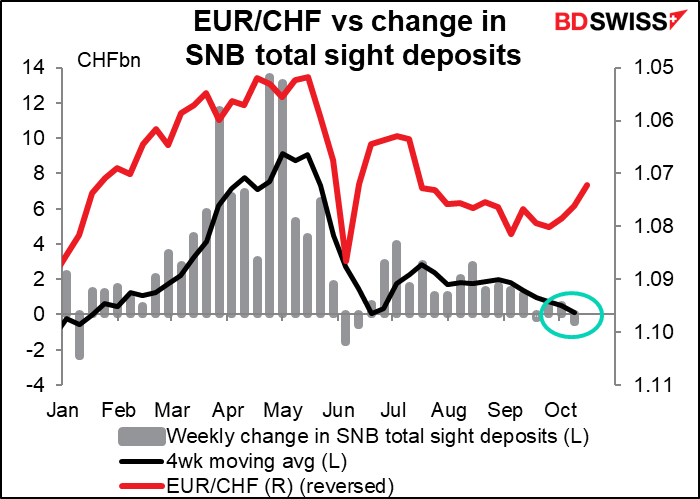 There are two notable speakers today, Fed Chair Powell and Vice Chair Clarida, but neither is expected to say anything new. Powell will be taking part in an IMF panel discussion on cross-border payment systems and is not expected to comment on the outlook for monetary policy. Clarida will be speaking on the economic outlook at an American Bankers’ Association virtual event, but he spoke on the exact same topic last Wednesday at an Institute of International Finance event and I doubt if there’s any change in his view since then.

By the way, as I’ve mentioned before there are far more speakers nowadays since all the speeches are virtual. I’m therefore going to be more selective in which ones I include in my table of events, because it’s just getting to be too much. Today for example there are 19 individual speeches on the Bloomberg schedule (including Sunday). I’m not going to bother with welcoming remarks and speeches by people who’ve spoken recently, except when it’s Powell, Lagarde, or other central bank heads.

No forecasts for the Bank of Canada’s quarterly Business Outlook Survey, nor does the market seem to pay that much attention to it. 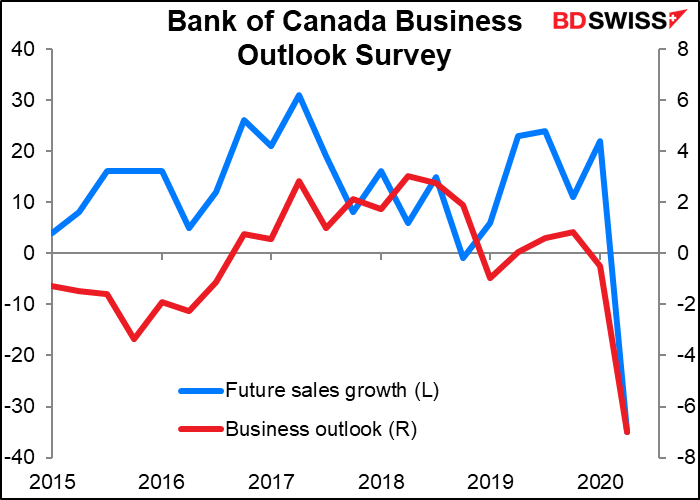 Overnight we get the minutes to the Reserve Bank of Australia (RBA) October meeting, but I don’t expect any surprises. (Of course by definition a surprise is something you don’t expect, so perhaps I should say “I expect the minutes will simply confirm what we already know.”) The reason is that last Thursday, RBA Gov. Lowe made an enlightening speech on “The Recovery from a Very Uneven Recession.” In this speech he explained everything we’d want to learn from the minutes.

Specifically, Gov. Lowe explained how the RBA has shifted from targeting expected inflation to focusing on unemployment. Moreover, Gov. Lowe said “The Board will not be increasing the cash rate until actual inflation is sustainably within the target range. It is not enough for inflation to be forecast to be in the target range.” That’s a big switch, as previously they would move if the forecast were in the 2%-3% target range. It’s also quite similar to what the Fed has said with its new regime. It looks like there’s a new trend among central banks to stop moving proactively against inflation. This change in central banks’ “reaction function” would change how financial markets react to higher inflation figures – until recently, higher inflation has meant higher interest rates are coming and so was positive for a currency, but now higher inflation means lower real interest rates and would therefore be negative for a currency.

Just FYI, he added that “this is still some years away. So we do not expect to be increasing the cash rate for at least three years.” Even that seems optimistic to me, as headline inflation hasn’t been sustainably within that range since 2014 and is currently negative. 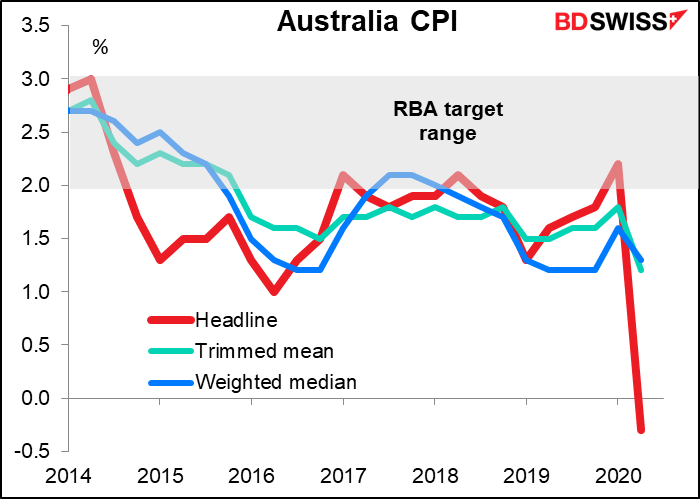 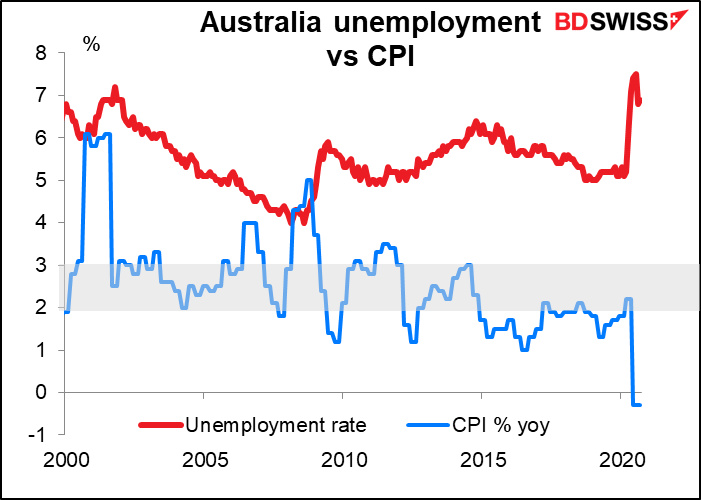 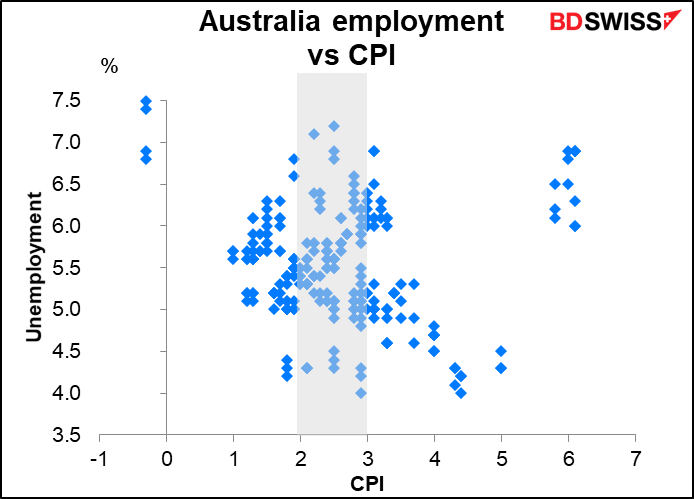 NB:  this is the one central bank that meets 11 times a year, vs 8 times for all the other major ones. I’m going to have to write a comment about the meeting every time even though they’ve pledged not to raise rates for the next 33 meetings at least. I guess I can just store my comment and reuse it every time, maybe updating the graphs, unless it seems that they’re likely to cut rates sometime. Gov. Lowe pledged not to raise rates but didn’t pledge not to cut rates.

Australia will release its Q3 inflation data next Wednesday, 28 October. 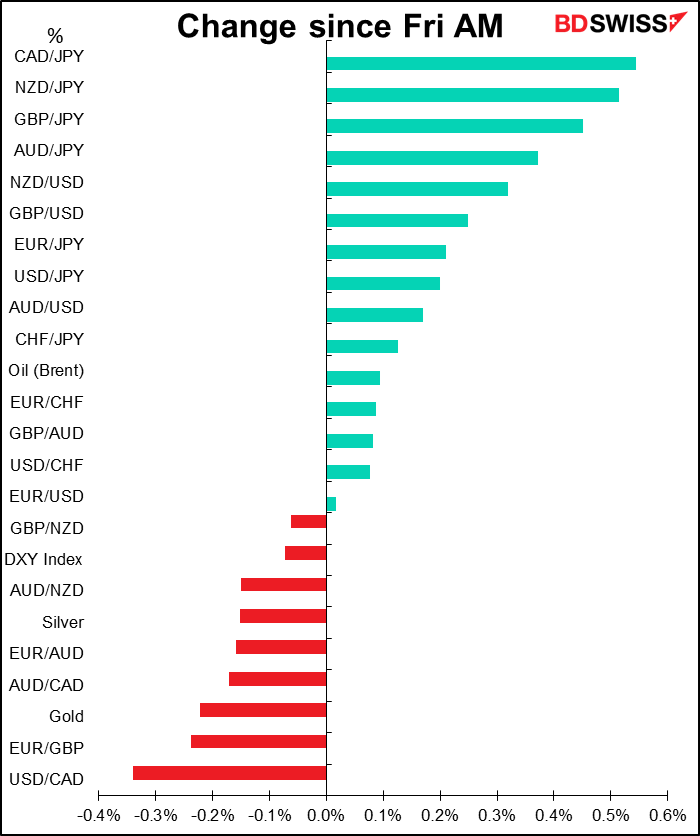