You are at:Home»MARKET PREVIEW»“Risk on” as US-China Dispute Fades Into Talk, No Action; RBA Rate Decision 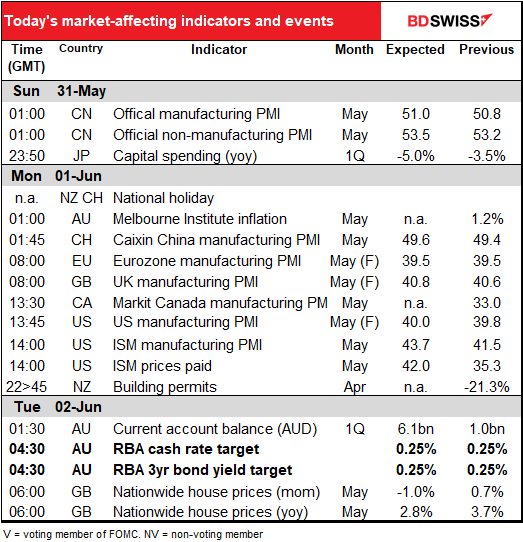 Riots across America, US-China relations worsening, deaths starting to creep up again as countries emerge from lockdown, mixed China PMIs…it’s “risk-on” all around! Not necessarily what you would expect, no?

The big issue seems to have been The Donald’s big talk, little action press conference on Hong Kong Friday after Asian markets had closed. He announced that he would revoke Hong Kong’s special trading status with the US, but that had already been well telegraphed earlier in the week by Secretary of State Pompeo. The key point is that there were no further measures, such as withdrawing from the US-China Phase One trade agreement or imposing sanctions on any Chinese officials. For its part, China failed to retaliate over the weekend, which further calmed markets. And Hong Kong protesters seem to be running out of steam.

The result was a 3.2% rise in Hong Kong stocks and a sudden strengthening of the CNY. 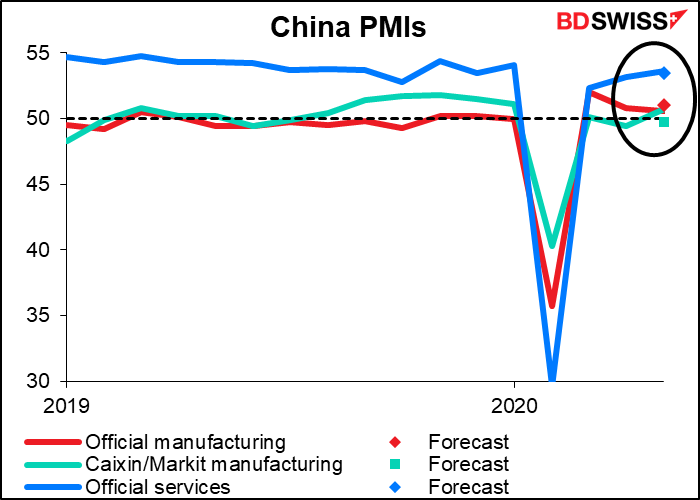 The S&P 500 futures were trading more or less unchanged after gaining 0.5% on Friday. This will only convince more people that the US stock market has nothing to do with the reality of life in the US.

Oil, which has been recovering steadily, jumped further on reports that OPEC+ is set to discuss a short extension of its current output cuts. The group is discussing bringing its next meeting forward by a few days to 4 June (Thursday).

The market added to EUR longs and USD shorts during the week. The big increase in short USD positions came through JPY, where longs increased substantially, as well as an increase in long EUR and MXN positions. There was also a small reduction in short NZD and short CAD.

Elsewhere, the market increased short positions in GBP and AUD.

It’s interesting to note the divergence within the three commodity currencies. Speculators are short all of them to a similar degree relative to the last five years, so there hasn’t been that much discrimination among them. This week’s action suggests that perhaps the trade tensions between China and Australia may be taking a toll. Meanwhile, higher oil prices may be improving sentiment towards CAD.

Specs cut gold longs while adding significantly to silver longs Silver is still cheap relative to gold on a historical basis and with the economy improving, its industrial uses may come to the fore.

There was a big close-out of copper shorts, indicating improved confidence in the global recovery. However that flies in the face of the even larger closeout of US Treasury shorts. I don’t know what to make of those two contradictory signals. In fact, it seems that the two have been totally uncorrelated for at least the last year. 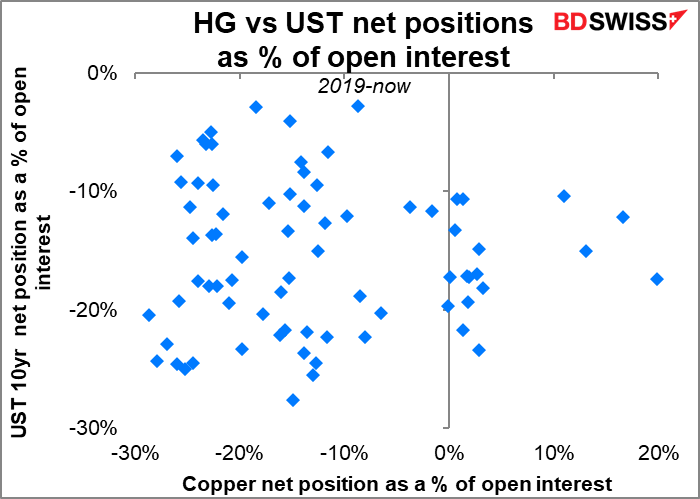 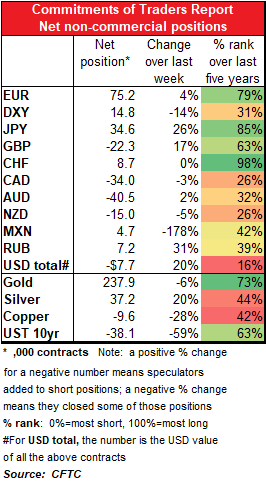 The market today will focus on the manufacturing purchasing managers’ indices (PMIs) the final ones for the largest industrial countries and the only ones for the rest of the lot. The manufacturing PMIs are normally the most important ones, but the COVID-19 pandemic has hit the service sector harder than manufacturing, so for now the service-sector PMIs (out Wednesday) are more important. The preliminary ones are rarely revised significantly so I doubt if they’ll have much impact.

In the US, people pay a lot of attention to the Institute of Supply Management (ISM) version of the PMIs. These are the original grand-daddy of the PMIs, but their construction leaves a lot to be desired compared to the Markit version, IMHO. The ISM version is expected to rise even though last month was still higher than the Markit figure for this month. That’s one reason I don’t trust it. 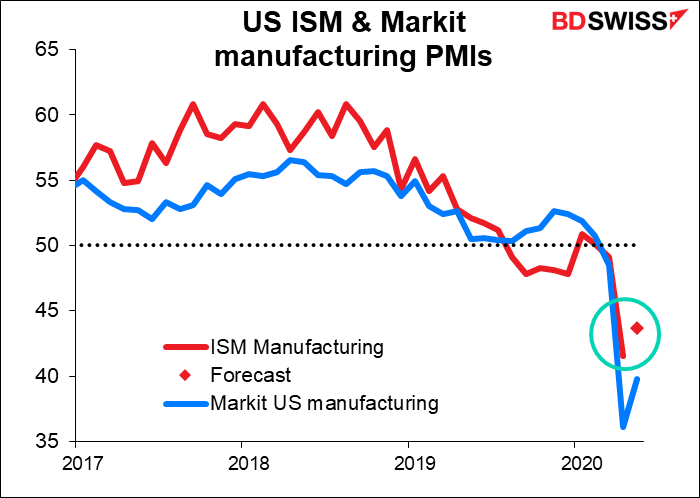 After that, there’s nothing on the schedule that important until the Reserve Bank of Australia (RBA) meets overnight. The meeting should be relatively uneventful. The Board has pledged not to increase the cash rate target “until progress is being made towards full employment and it is confident that inflation will be sustainably within the 2–3 per cent target band.” On the other hand, Gov. Lowe has said it was “extraordinarily unlikely” that the RBA would implement negative rates; instead, they would first choose to increase their bond purchases. But in fact they have reduced the size of their balance sheet from the recent peak. With tightening ruled out for now and no sign that they think further loosening is required, the RBA seems likely to be on hold for the indefinite future. This is indeed what the market is pricing in – no change in rates as far as the eye can see (which is December). I would expect a statement similar to May’s with again a pledge “to do what it can to support jobs, incomes and businesses during this difficult period…” but no new initiatives at this time. Accordingly, I would expect little if any reaction from the FX market.

When the UK day begins Tuesday, the Nationwide Building Society announces its closely watched house price index. It’s expected to show the steepest mom fall in house prices since October 2010. That’s actually not too bad – it could be worse (e.g. -2.6% mom in Dec 2008 or -3.1% in May 2008). I suspect that the market will pretty much ignore the figure as the UK was still on lockdown for most of May and it would’ve been extremely difficult to view and buy a house during this period – just ask Dominic Cummings about the problems one encounters visiting houses during lockdown. 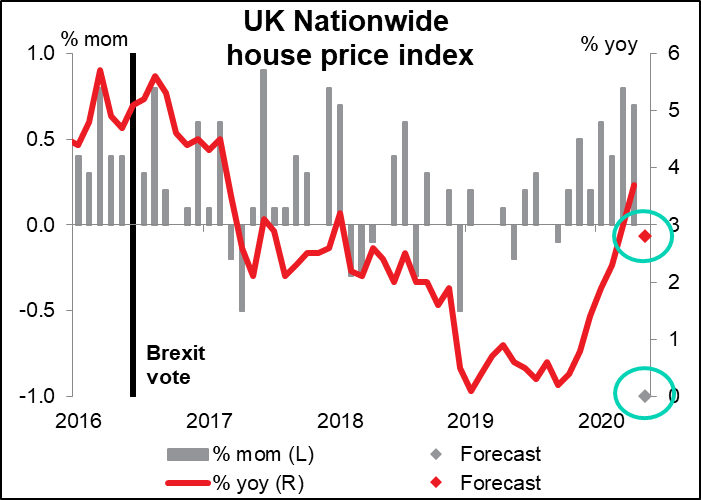 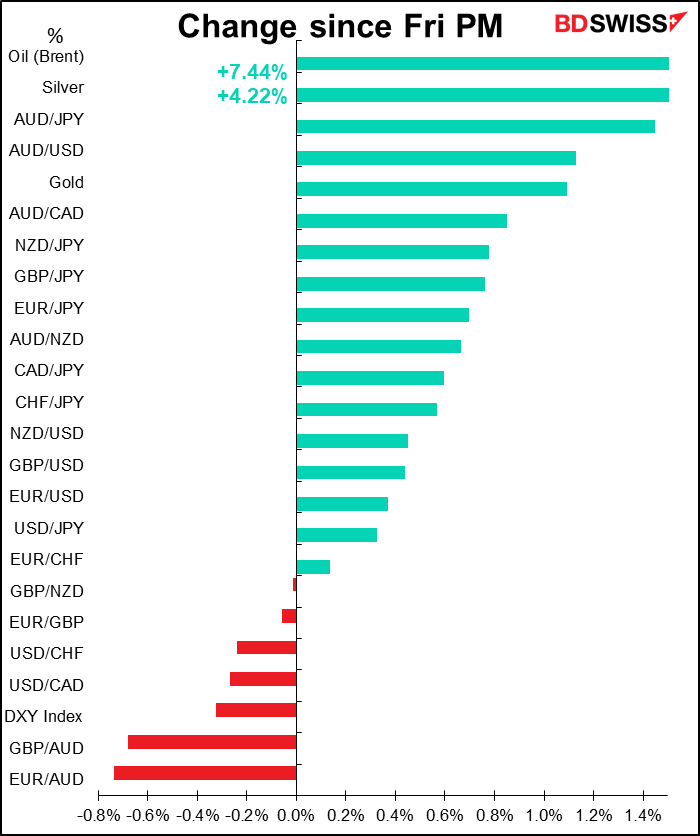