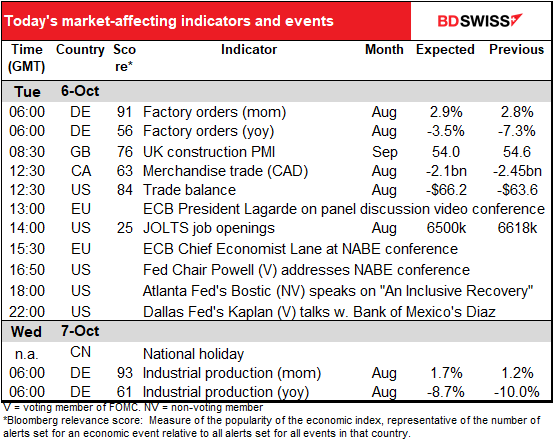 Trump checked himself out of the hospital and tells the US that “maybe he’s immune” and that they shouldn’t worry about the virus. He’s walking around without wearing a mask even though he knows he’s still contagious and numerous members of the White House staff have tested positive. (There are more active cases of the virus in the White House at this point than there are among native New Zealanders.)

Trump says he feels better than he did 20 years ago, but he probably wasn’t pumped full of steroids 20 years ago. Furthermore, the drug he’s been taking, dexamethasone, can cause agitation, paranoia, mania and even psychosis. Did you see his tweet storm yesterday of 19 all-caps tweets in one hour? Mostly total non-sequiturs?

Before everyone thinks he’s all OK, we should remember Trump’s close friend Herman Cain:

In any case, Trump’s Superman act doesn’t seem to have done much for his popularity. Biden’s lead is still growing and the market believes he’s increasingly likely to win. His latest 14 ppt lead in the polls could be enough to allow him to declare victory on election night and thereby avoid all the post-election shenanigans that Trump is planning to implement in case he loses. 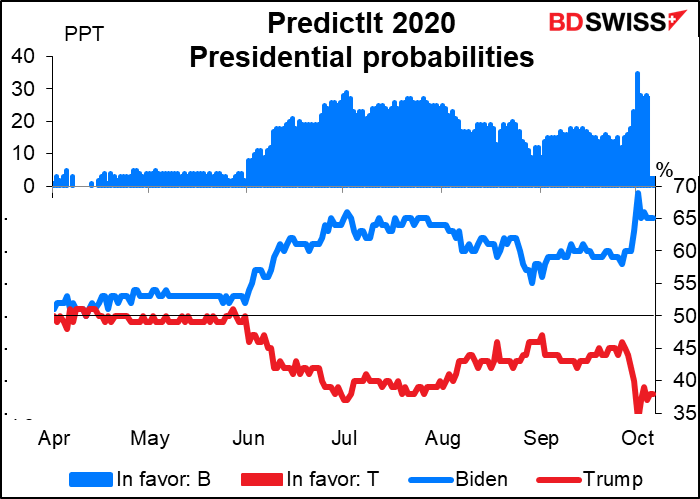 Democrats are also now “slightly favored” to win a majority in the Senate, according to the widely respected statistical website Five Thirty-Eight.

An upward revision to the Eurozone’s service-sector purchasing managers’ index (PMI) (48.0 from 47.6) and an unexpected rise in the Institute of Supply Management (ISM)’s service-sector PMI (57.8 vs 56.2 expected, 56.9 previous), plus more high-level talks on US fiscal stimulus created a “risk-on” environment yesterday that pushed equity indices and Treasury yields higher. The yield on the long bond (30 years) rose 10.3bps, the largest move in a month.

Of particular note with the ISM index was that the service-sector employment PMI went back above 50 for the first time since the pandemic began. Since most jobs are in the service sector, this was an encouraging change. 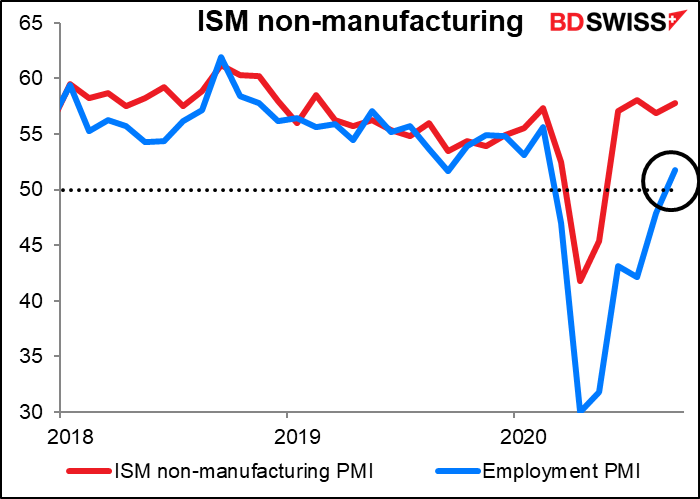 Against this background, we had a pretty typical “risk-on” move in the FX market, with EUR up and JPY, USD and CHF down.

With the rise in US rates, the US rate advantage over Japan is gradually rising. This has been supporting USD/JPY. 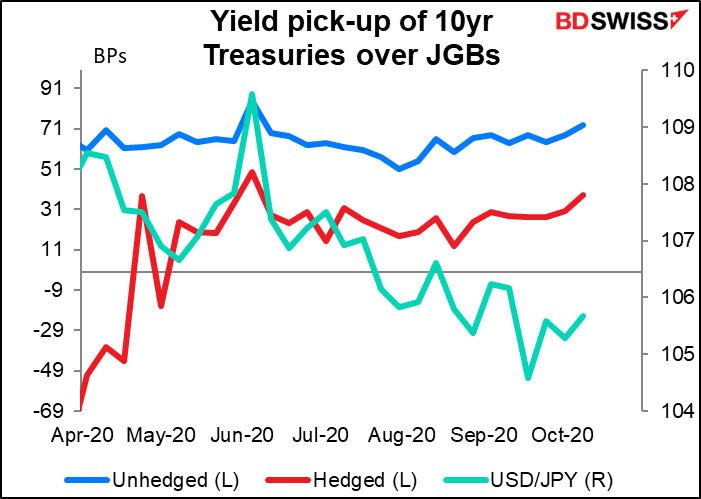 RBA decision:  no change, little clarity The Reserve Bank of Australia (RBA) left rates unchanged, as the market expected. It hinted at lower rates to come, but gave little guidance on when that might be. My guess is that they are preparing the way if needed while urging the government to do all it can.

The RBA upgraded its view of the labor market – a crucial factor for RBA policy (although it slightly downgraded the view on wages). It acknowledged that the market is looking for a rate cut, as it observed that “Over the past couple of weeks, 3-year yields have fallen to around 18 basis points as markets price in some probability of further monetary policy easing.” It didn’t push back on this idea, which suggests that it doesn’t necessarily think this is wrong, but if it had wanted to give a hint about a rate cut in the near future, it probably would’ve referred to short-term rates, not the three-year yields.

Like many central banks, the RBA tried to pass the baton over to the government and fiscal policy. “Over the past six months, the Australian economy has been supported by a substantial easing of fiscal policy,” it said. “Public sector balance sheets in Australia are in good shape, which allows for continued support, with the Australian Government budget to be announced this evening.” This was a highly unusual comment – the RBA rarely if ever mentions fiscal policy in its post-meeting statements, as far as I can remember.

I still think a rate cut is coming at some point. In the last paragraph, the one with the forward guidance, it added two new sentences: “The Board views addressing the high rate of unemployment as an important national priority.” Perhaps this was aimed at the government and its budget, but perhaps it was also connected with the second new sentence:  “The Board continues to consider how additional monetary easing could support jobs as the economy opens up further.” I think that’s a hint of things to come if necessary. That makes me more bearish on AUD.

AUD/USD shot up for a second when the report came out, but quickly came back to trade unchanged.

FYI Eurozone finance ministers chose Frank Elderson to take over from ECB Executive Board member Yves Mersch when Mersch’s ECB term ends in December. Elderson, 50, is currently Executive Board Member of the Dutch central bank and is responsible for supervision of banks in the Netherlands. He would be the first Dutch person on the ECB’s top policy team in 17 years. In terms of policy, the Netherlands has been relatively conservative – the country was one of the “frugal four” that objected to the European Commission’s plan for a huge bailout fund – but I’m not sure where Elderson stands on this issue. He’s a lawyer, not an economist.

Not that much on the schedule today in terms of indicators. The main thing will be the extensive slate of speakers.

First up is ECB President Lagarde, who will be addressing the Wall Street Journal’s online CEO Council Summit. Her speech is on “Europe’s Economic Recovery” and will address questions such as, “How well is the economy recovering and is that at risk as virus cases again mount in Europe? What more can the ECB do with rates already negative, and how should central banks adapt for the future?” I think her views are pretty well known already and I don’t anticipate much excitement.

Fed Chair Powell will discuss the economic outlook with a webcast to the National Association for Business Economics (NABE). You can watch it here if you’re interested. The main point of interest will be what he has to say about Congress’ failure to come up with another stimulus package. He and his colleagues have been quite vocal about the limits of monetary policy and the need for further fiscal support. “The path forward will also depend on the policy actions taken across all parts of the government to provide relief and to support the recovery for as long as needed,” he said at his press conference following the September meeting of the Federal Open Market Committee (FOMC). And Chicago Fed President yesterday said that “without adequate fiscal support before too long … recessionary dynamics (might) gain more traction.” Alas that’s not happening. Has that caused him to change his view any, or to contemplate further monetary measures?

He’ll be followed by EBC Chief Economist Lane, who will probably say something about how “the Governing Council will continue to assess carefully the incoming information, including developments in the exchange rate, with regard to the implications for the medium-term inflation outlook.” Any deviation from that standard statement would be worth noting.

There’s also an unusual talk between Dallas Fed President Kaplan (V) and Bank of Mexico Gov. Diaz le Leon via webcast. They’ll be discussing the US and global economy. The Dallas Fed region borders Mexico so perhaps there’s some synergy there.

As for the indicators, we already discussed German factory orders yesterday, and besides, it takes me so long to get this comment done that it’s out already, no doubt. I will be discussing tomorrow’s German industrial production at the end of this comment, however.

The UK construction purchasing managers’ index (PMI) is expected to decline somewhat from its relatively high level but remain well in expansionary territory. This would be in line with what happened with the manufacturing and service-sector PMIs and probably wouldn’t be much of a surprise to the market. 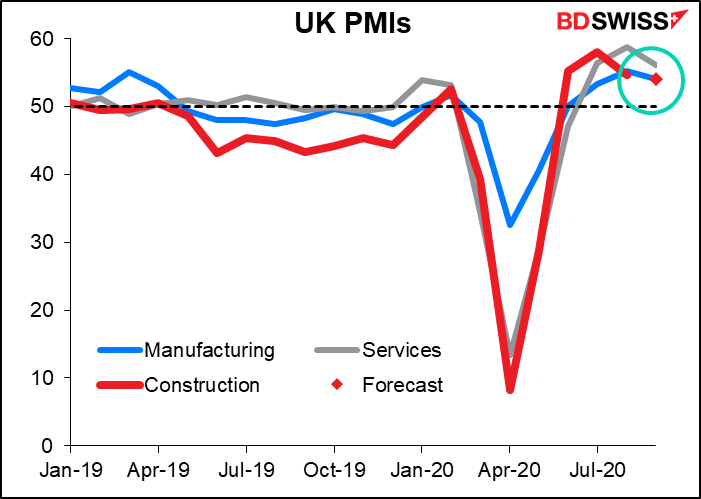 Canada’s trade deficit is expected to narrow a bit. Autos exports, which account for 20% of total exports, already returned to pre-pandemic levels by July, while data on hours worked and the manufacturing PMI point to a stronger performance for other export categories. 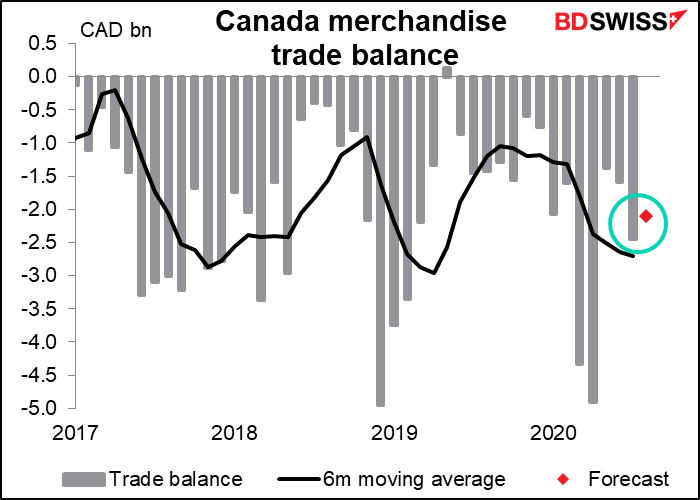 The Job Offers and Labor Turnover Survey (JOLTS) report on job openings isn’t a big market mover, probably because it’s a few months behind the times. Nonetheless it’s worth looking at to see how the US labor market is developing. Answer: not so great. The number of job openings is expected to fall by 118k, the first decline since the recovery began in May. 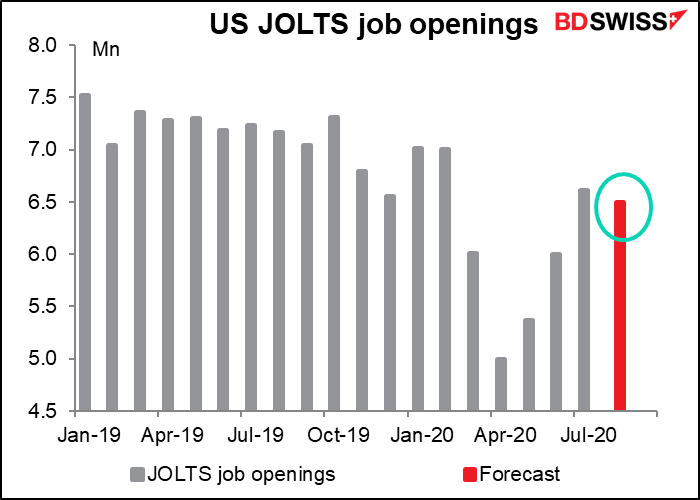 This might be one of the reasons why the number of people getting jobs has declined too. 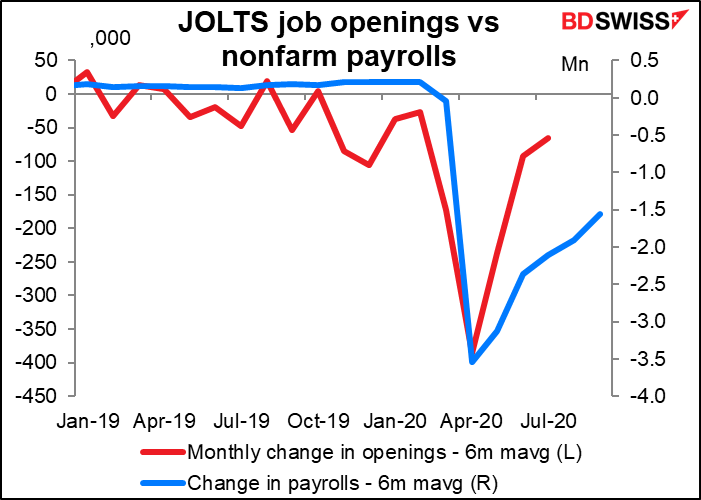 Then early in the European morning, when people in Germany are just tucking into their Weisswurst and Sauerkraut, Germany announces its industrial production. The month-on-month change is expected to accelerate a bit from July, but not much. 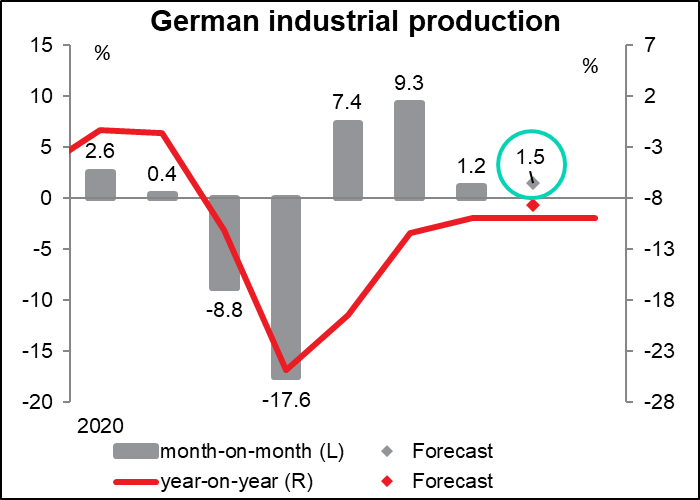 A rise of that magnitude would leave production 9.3% below the pre-pandemic level, which isn’t very good. I think this figure would be disappointing and might be negative for the euro. 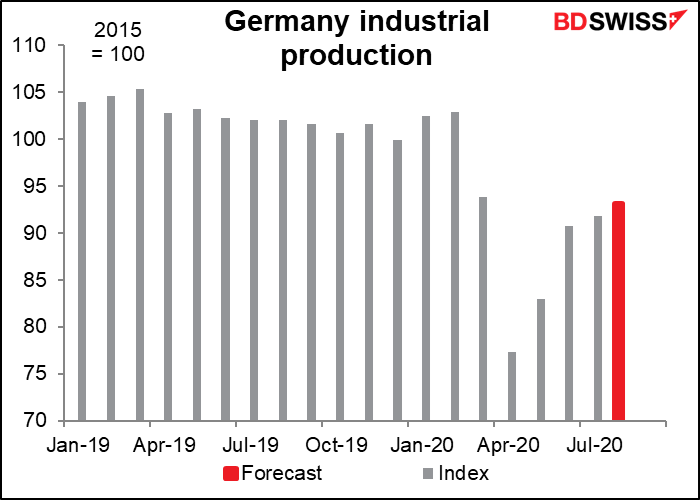 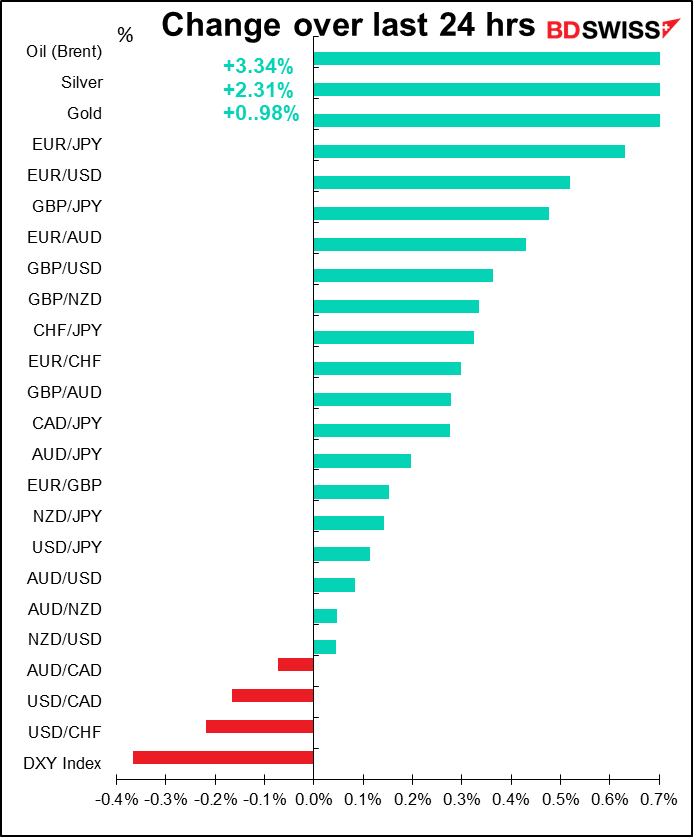