You are at:Home»MARKET PREVIEW»“Risk-On” as Fed to buy Corporate Bonds, US Infrastructure Spending Mulled; US Retail Sales, Powell Testimony 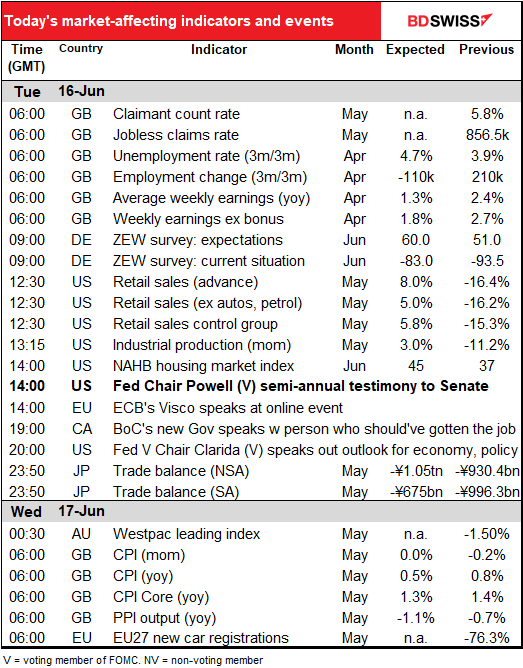 I do wish investors could make up their minds. One day the world is collapsing, the next day everything is coming up roses. US stocks closed higher, every stock market in Asia is up this morning, and the FX market is signaling “risk-on” with a vengeance: commodity currencies higher (led by the Leader of the Pack, AUD) and “safe haven” JPY & CHF lower, along with USD.

Admittedly there was some reason to celebrate. First was news that the US may allow US companies to work with China’s Huawei to develop new 5G standards. That concession could lower the recent US-China tensions. Then the Fed announced the details of its previously announced plan to support the corporate bond market. It will buy a broad portfolio of corporate bonds based on a diversified market index. The Fed has been buying about $300mn a day in bond exchange-traded funds (ETFs) since May 12th. Up to now, the requirements for participating companies made it seem like the purchases would be limited to companies that were in serious trouble – a backstop for the most desperate companies. But this plan appears to be more of a general support plan for the corporate bond market overall.

One wonders exactly why they are doing this. The corporate bond market has recovered nicely without it, making their explanation – that it’s needed to ensure smooth functioning of the market – rather questionable. But that seems to be a common question facing the Fed’s actions: its explanations don’t really match reality. Oh well. 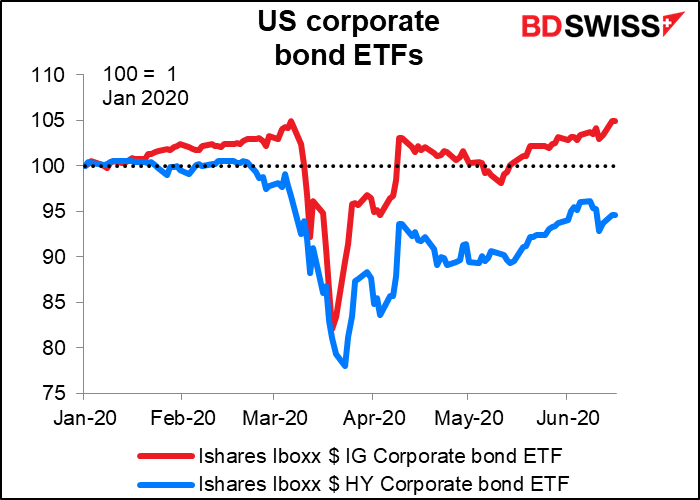 There were also rumors that the Trump regime is considering a proposal to invest nearly $1tn in infrastructure. The current infrastructure funding law is due for renewal by the end of September. The House Democrats have already proposed a $500bn initiative over five years.

Furthermore, there are some signs that economic activity is coming back. The Baltic Dry Freight Index, a measure of shipping costs for bulk commodities such as coal, grain and iron ore., has risen for 12 consecutive days and is now at its highest for the year as the price of bulk commodities begins to rise. GBP was mixed: it rose vs a weak USD but fell vs a stronger EUR.

There was some optimism about the Brexit process after UK PM Johnson & his minions held a video conference with their EU counterparts. Both sides agreed to inject “new momentum” into the negotiations, whatever that means. According to the FT, officials on both sides said privately that the mood was improving. The EU side seemed please that at least Johnson hadn’t walked out of the talks and seemed committed to intensified negotiations in July.

Nonetheless, while Johnson may be expecting that his threats will move the EU, the EU remains committed to what it’s said. The European Parliament tomorrow will debate and Thursday will vote on a resolution that basically reiterates their existing negotiating position, which of course the UK has already rejected. The problem is that the EU side requires all 27 governments to approve of the deal. It’s difficult to imagine that they will all agree to make the concessions that Britain wants, particularly as some of them don’t care one way or the other about trade with Britain. In that case, the only way negotiations can succeed – as we saw with the initial negotiations – is for Britain to accede to Europe’s terms, which is what I think is likely to happen.

Furthermore, Johnson said that the UK’s cut-off date for a Brexit deal will now be July, noting that he doesn’t “see any point” in negotiations “going on until the autumn/winter.” That’s a very tight schedule, especially seeing as the focus of attention in Brussels and other European capitals nowadays is on the negotiations for the EU recovery fund. I think the only way they will be able to agree in time is if the UK capitulates. It’s either that or a “no-deal” Brexit.

The Bank of Japan (BoJ) increased its estimate of how much it would lend to companies while leaving its other policy tools unchanged. The move was as expected. The increase shouldn’t be portrayed as any change in policy, which may be why they released the news in a separate press release. They never set a limit on spending; it’s just an increase in their estimate of how much the facility would require (now JPY 110tn vs the previous estimate of JPY 75tn).

A lot on the schedule today!

We discussed the UK employment data yesterday. Beside, I’m too lazy to get up early and get this out in time to beat the new UK indicator release time

So today’s comment starts with the ZEW survey. As you know, this is an opinion survey of analysts and economists, so it’s a picture of what the market’s expecting, not what will really happen. Analysts expect both the current situation and the expectations indices to improve a little bit, with the difference between the two remaining pretty much unchanged. In short, the market’s view is, as the Beatles said, “it’s getting better all the time.” But not necessarily at a faster pace than it was last month. 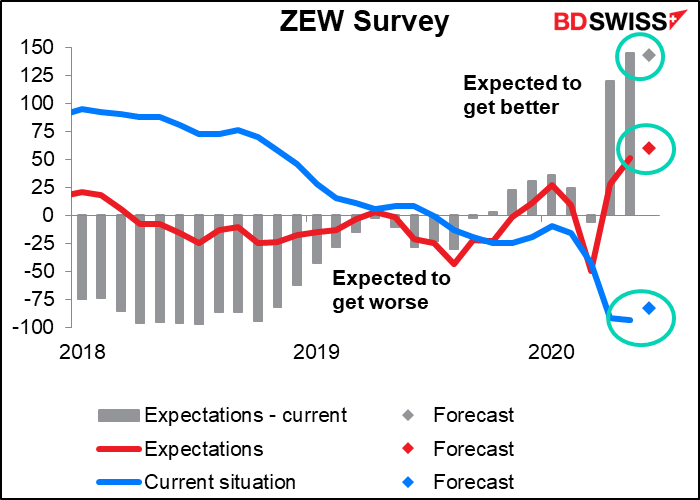 Now comes probably the biggest statistic of the week: the US retail sales. The headline figure is forecast to be up 8.0% mom. This would be the biggest jump ever in the data going back to 1992. 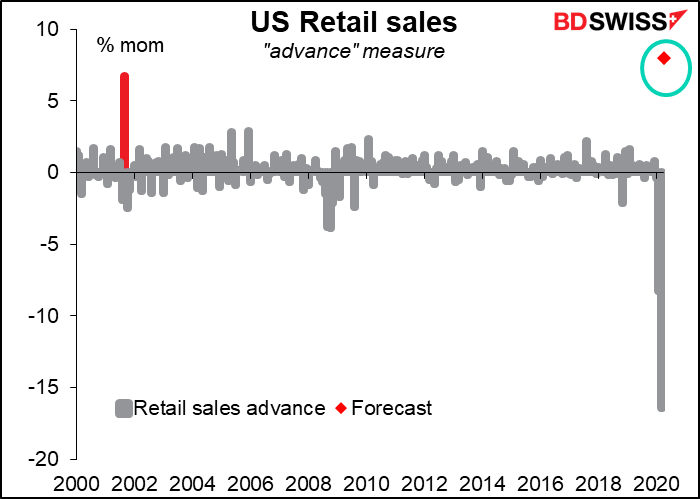 The second-biggest jump was in October ’01, when sales rose 6.7% mom. I’m sure you remember what happened in September ’01. For some reason, people thought shopping was the way to go out and show the terrorists that they weren’t going to win – as if Osama bin Laden had shorted Macy’s stock. President Bush did in fact encourage people not to be afraid to “go shopping for their families” as part of a general appeal after 9/11 to continue with normal quotidian activities, including “go to Disneyworld” to show that they’re not scared to travel by plane.

However, I think the rise in sales that month may have had more to do with a sudden jump in oil prices, as sales excluding gasoline didn’t show any unusual bump – they were up only 1.7% mom, which is no surprise following the equal-but-opposite -1.7% decline the previous month. 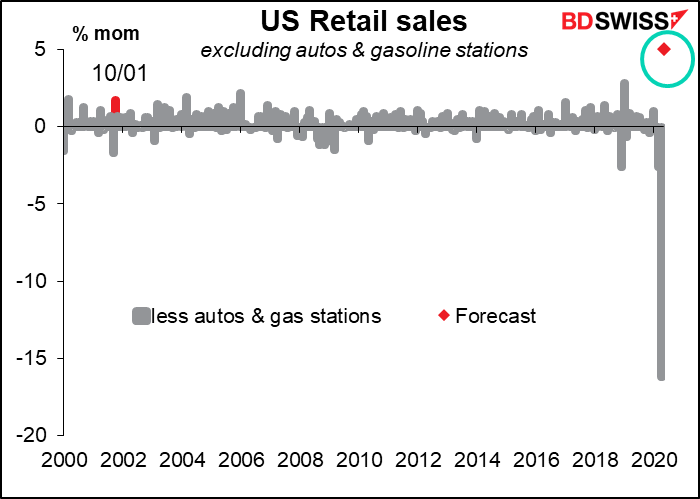 It’s probably more useful to look at the absolute level of sales rather than the rate of change. What matters is that sales are expected to rise from the previous month, but still be nothing like normal levels for recent years. We’ll have to wait until June or later for that, probably. 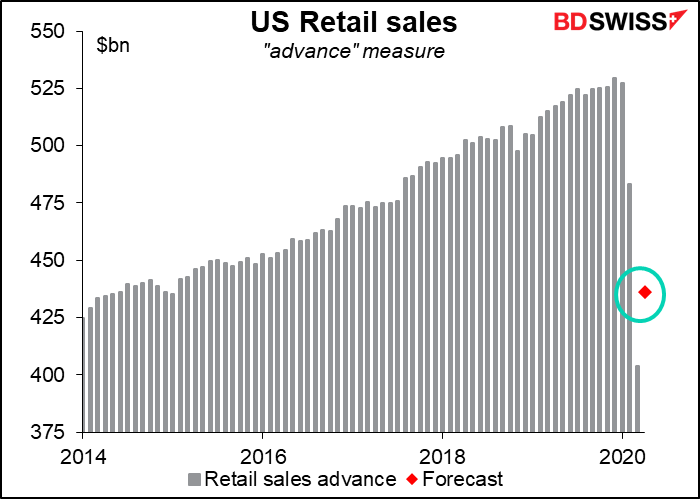 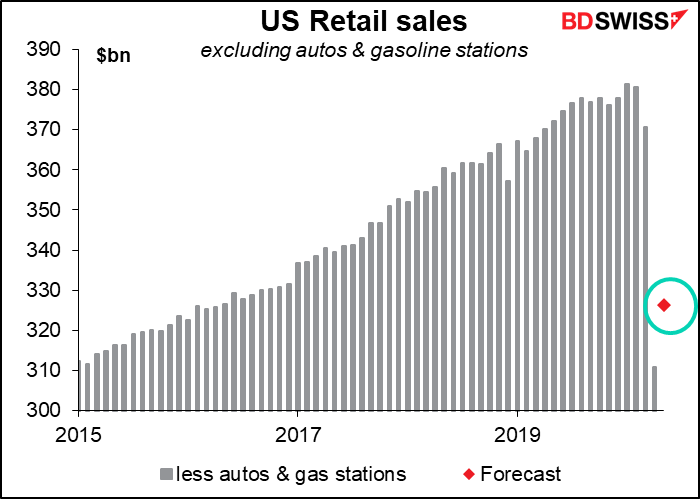 Same kind of deal with US industrial production. I’m not going to draw a graph of the rate of change, because it would just look the same as the retail sales graphs above. April was of course the biggest decline ever. May however will not be the biggest rise ever; that honor goes to August 1952, which was +6.4%, followed by Dec 1959, +6.2%. And November 1964 was +3.1%, which is a bit more than is expected for this month. Does it matter? This isn’t baseball. I have no idea why production was so volatile back in the 1950, and in any case it’s irrelevant to today. The main point is that production is expected to bounce back in May, but not by anywhere near as much as it fell in April. It’s expected to be back to the levels prevailing in 2010 – we’ve lost 10 years worth of growth. 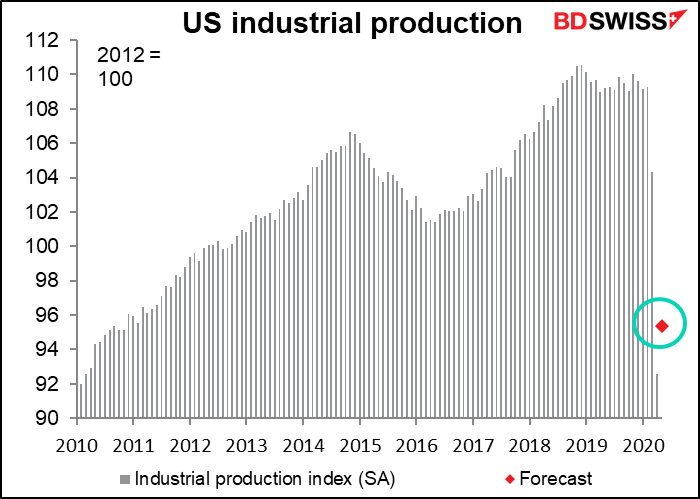 The National Association of Home Builders (NAHB) index is also expected to recover part of but by no means all of its recent losses. In fact housing has held up much better than most other sectors in this decline. This is one of the few indicators that had nothing near a record decline in April. 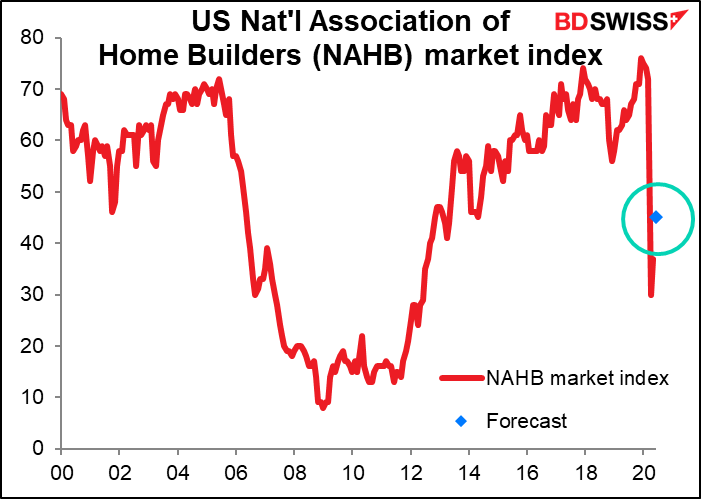 Next it’s time for Fed Chair Powell’s semi-annual testimony to Congress. Today it’s the Senate Banking Committee, tomorrow it’s the House Financial Services Panel. I don’t see what else he can say that wasn’t already covered in depth and detail in the press conference. The specialist press are much better informed & knowledgable about monetary policy than the Congressfolk, who for example grilled Google CEO Pichai about iPhones (Steve King) (Answer: “Congressman, iPhone is made by a different company.”) or asked Facebook’s Zuckerberg how the company made money if it didn’t charge for its services (Orrin Hatch) (Answer: “We run ads.”) I expect more grilling about how long the recovery will take, what the Fed will do if things turn worse, etc etc, You can read Powell’s answers or quasi-answers to all of those questions and many more in the link I just gave you (although be forewarned, it’s 29 pages double-spaced).

A few hours later, the new Governor of the Bank of Canada, Tiff Macklem, appears at the House of Commons Standing Committee on Finance. This will be important as his first public appearance as Governor and therefore a good opportunity to get his view on the world. He’ll be appearing with Senior Deputy Gov. Carolyn Wilkins, who was the other candidate for the job. One wonders what she’ll be thinking as she listens to him.

To be fair, Macklem held a number of senior positions at the BoC for many years, including Senior Deputy Governor, Wilkins’ current position, for four years. He had been a contender for the Governorship twice before but passed over both times. His winning card this time was his experience at the Ministry of Finance, where he worked for three years (as well as a period of secondment when he was at the Bank). That’s important as the government ramps up borrowing to deal with the fallout from the virus.

Overnight, Japan announces its trade figures for May. On an unadjusted basis the deficit is expected to widen, but after seasonal adjustment it’s supposed to narrow. 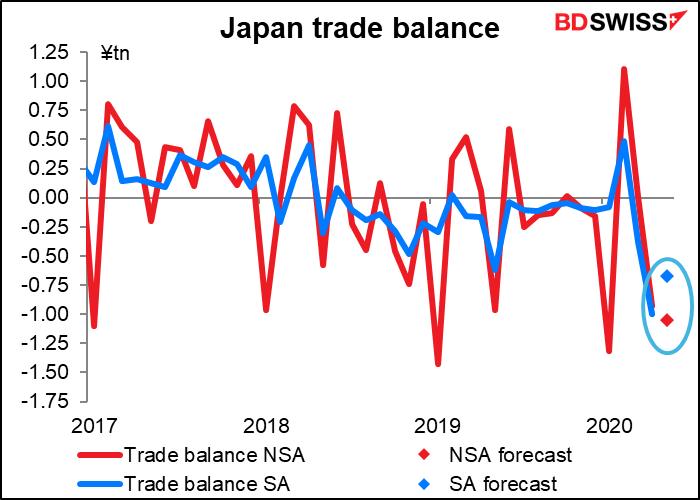 Exports are expected to plunge by even more than imports. But what’s striking is the alarming collapse in imports – from -7.2% yoy in April to an expected -20.7% yoy in May. Of course one country’s imports are another country’s exports. This may also be due to lower oil prices, too. 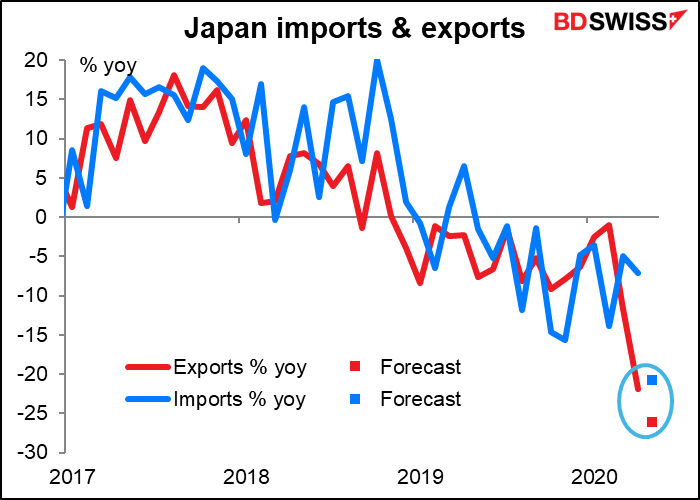 Then it’s off to bed, probably sleeping through the UK inflation data that comes out so, so early now. All measures of inflation are expected to slow, with the headline consumer price index (CPI) in particular seen slowing to an alarming +0.3% yoy rate of increase – far below the Bank’s 2% target. Consumer prices fell mom in April and are expected to be unchanged mom in May, meaning the recent trend is even worse. The Bank of England Monetary Policy Committee actually meets & votes today (the decision is always announced the next day) and I’m sure these data will be a big topic of discussion, if they weren’t available before. 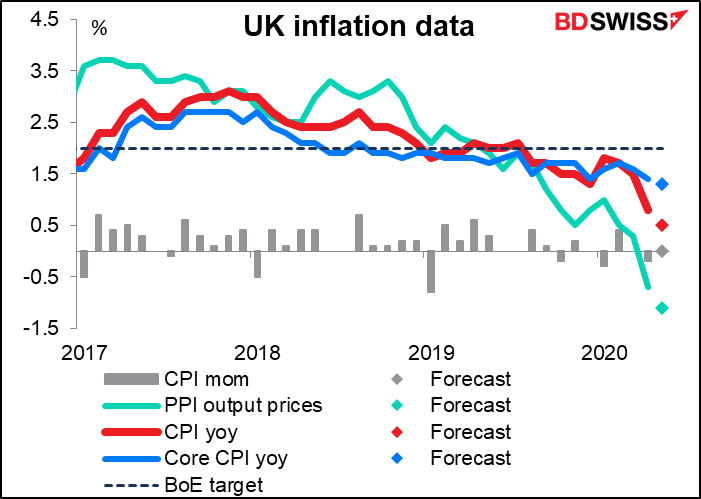 At the same time, we get EU27 new passenger car registrations for May. There’s no forecast for this, but people will probably be watching it as an indicator of whether demand is bouncing back. The April figure, 270.7k, was only 24% of the like year-earlier month’s sales. Let’s hope May was a bit better. 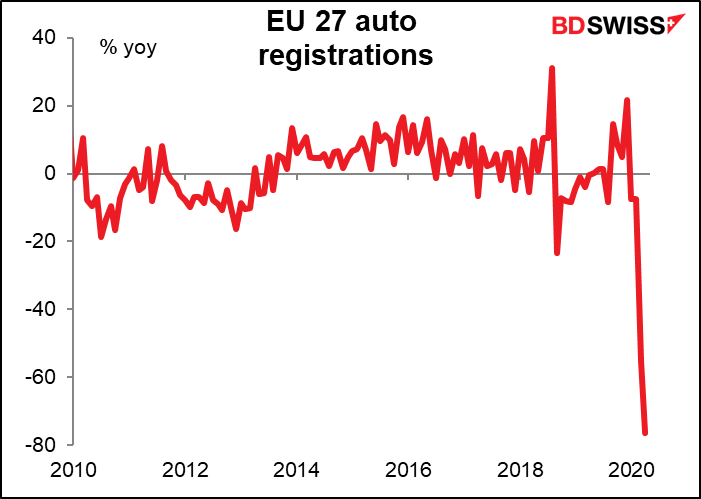 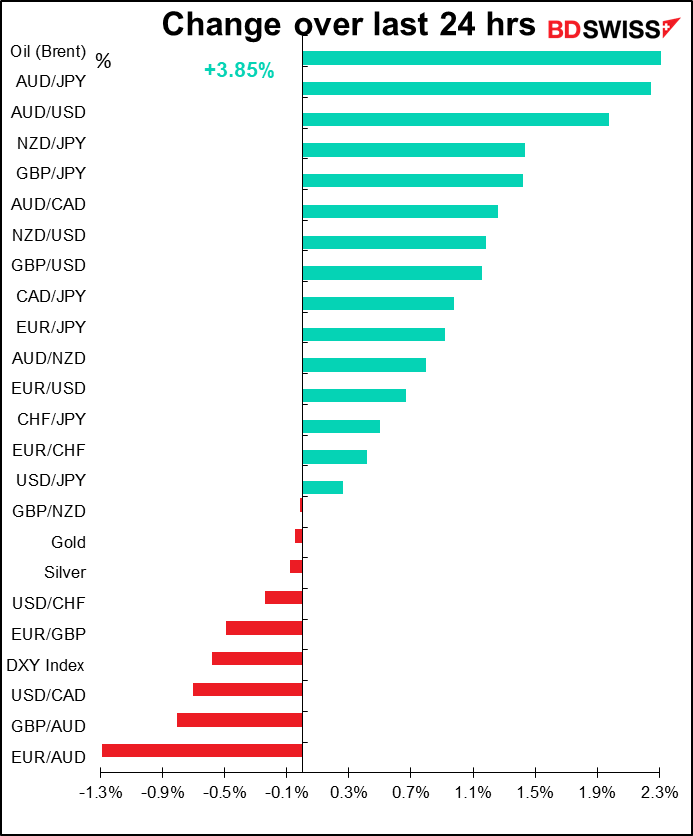