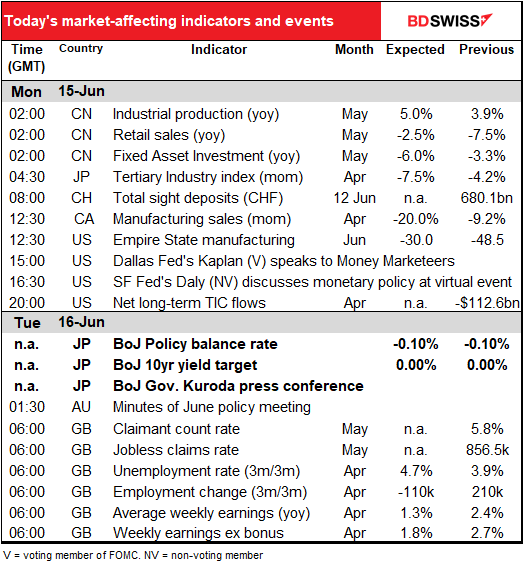 The FX market isn’t giving a clear “risk-on” or “risk-off” signal this morning, probably because the stock markets aren’t, either. US stocks were up Friday (S&P 500 +1.3%) but all Asian markets are down this morning, some by significant amounts (KOSPI -3.4%, FTSE Straits TImes -2.6%). The driving force, as I discussed in my Week Outlook on Friday, is fears of a “second wave” of virus infections, particularly in the US. Some of the biggest states – California (CA), Florida (FL) and Texas (TX) for example are seeing an alarming rise in the number of cases, and Dr. Anthony Fauci, director of the National Institute of Allergy and Infectious Diseases, said that bans on travel to the US might have to remain in place until a vaccine is available, whenever that might be. 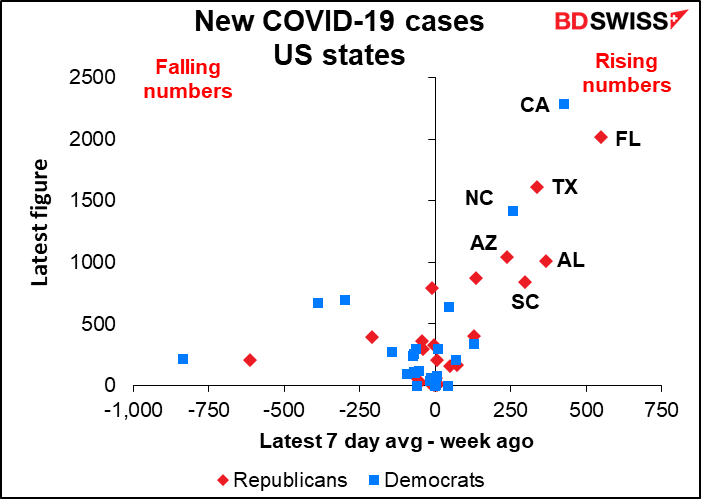 I’m at a loss to explain why CHF is the biggest loser this morning. Perhaps “supernatural forces” in the FX market? (aka official intervention by the SNB.)

Otherwise, currencies are showing no distinct pattern this morning. Movements from Friday are generally very small, especially compared with the volatility in stocks.

Speculators reduced their long-DXY positions and increased their short USD positions via currencies. The biggest contributors to the short-USD position was a substantial increase in EUR longs, followed by a reduction in GBP shorts. They also reduced shorts in the commodity currencies – AUD, NZD and CAD. On the other hand, they reduced JPY and CHF longs.

Another “risk-on” sign:  specs’ positions in copper flipped from short to long for the first time since 21 January. 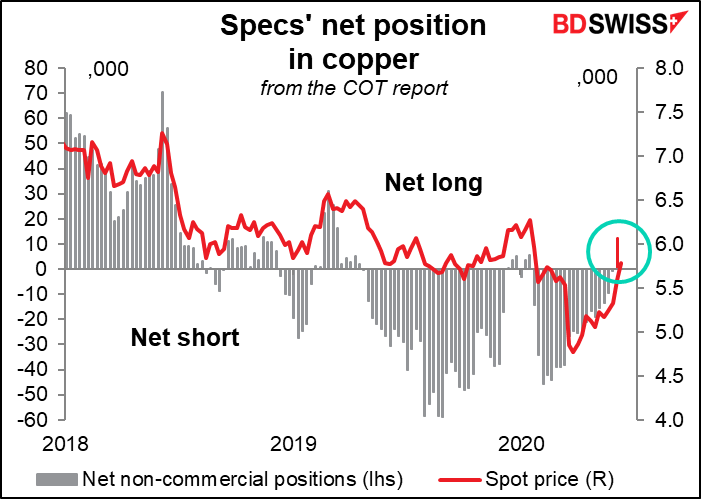 A reduction in gold longs goes along with the “risk-on” mood, but why then the even bigger reduction in silver longs? 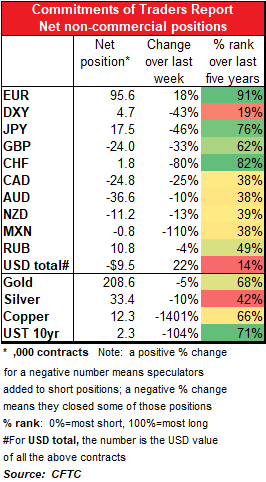 The question of copper vs silver positioning got me interested in what drives their relative prices.

Copper/gold is basically a “risk-on, risk-off” trade, as you can see from the close correlation between that ratio and AUD/JPY. (For copper I’m using the London Metal Exchange spot price in USD per metric tonne.) When the global economy is doing well, people need copper; when it’s doing badly, they become risk-averse and buy gold. 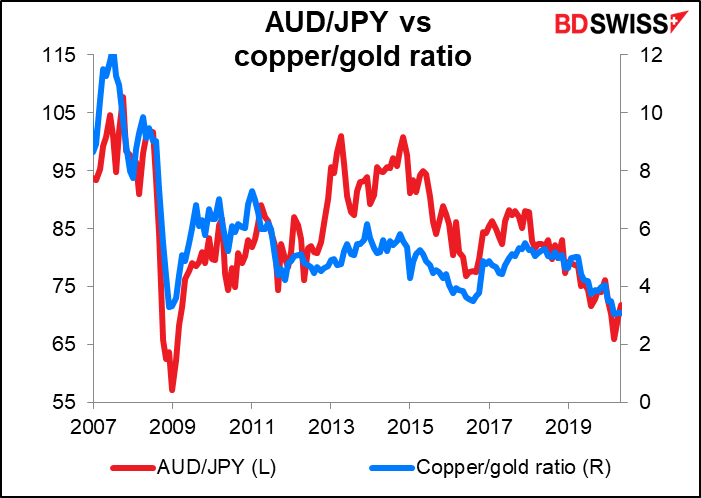 But what about silver, which has more industrial uses than copper?

Copper/silver seems to be largely a function of Chinese economic activity, which of course nowadays drives demand for copper (China consumes about 53% of the world’s copper). 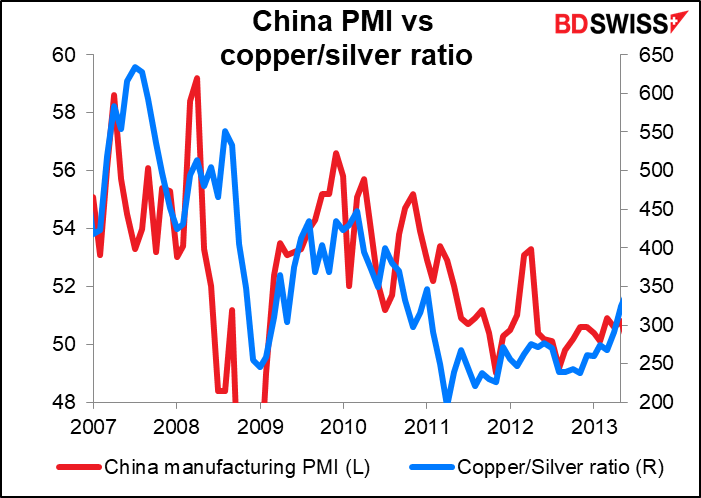 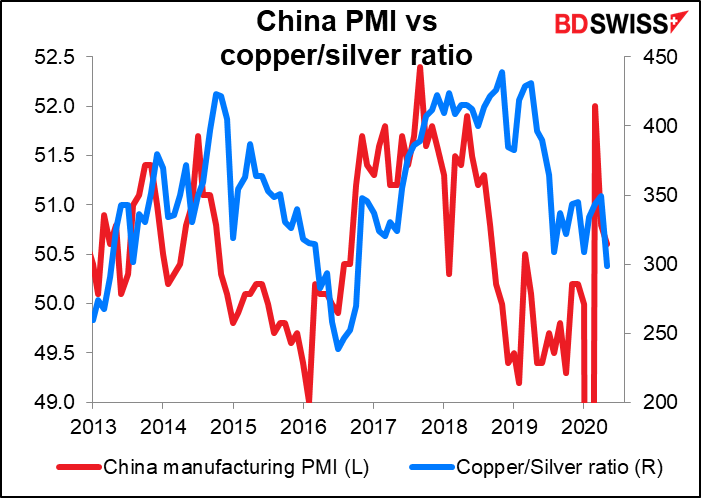 It’s not necessarily dependent on the price of copper though. 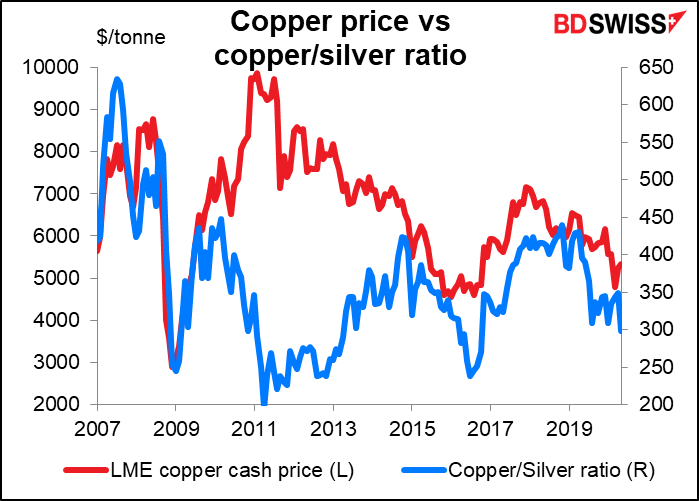 This is what I spend my Saturday nights doing nowadays. Sigh. I can’t wait until I feel comfortable going to the movies again.

The main thing during the European day today will be talks between UK PM Johnson and his and EU leaders about their future relationship. According to a hilarious article in the pro-Tory, pro-Brexit Telegraph newspaper, “Johnson will tell European Union leaders on Monday that they must conclude Brexit talks by autumn “at the latest” to give certainty to companies affected by the UK’s exit from the European Union.” The reason this is so funny is because of course the EU doesn’t “have to” do anything. It’s UK companies that will mainly be affected by the uncertainty, so it’s the UK that “must conclude” the talks. But Britain still believes it holds all the cards in these negotiations.

Following Britain’s announcement Friday that it would not seek to extend the transition period past the end of this year, both sides will reportedly stress the urgency of ending the stalemate in the negotiations. However no points of compromise have been found after four rounds of negotiation, and neither side has indicated (yet) a willingness to give in. If history is any guide, Johnson will cave eventually, if for no other reason than in fact the EU holds all the cards. “No deal” means trading on WTO terms, which would be much better for Europe than for the UK.

The WTO option would significantly disrupt trade between the UK and the EU and even some UK trade with other parts of the world. British imports from the EU and exports to the EU would face both tariff and nontariff barriers for goods and various restrictions on trade in services, which account for 45% of exports. (For more details, see What would ‘trading on WTO terms’ mean? by The UK in a Changing Europe, an independent research body.)

The Swiss National Bank has managed to cut back on its intervention as EUR strengthened. Last Thursday/early Friday though a big “risk-off” move send EUR/CHF sharply lower (1.0652 was the low). It will be interesting to see if they reacted to that move swiftly enough to make it into last week’s statistics. 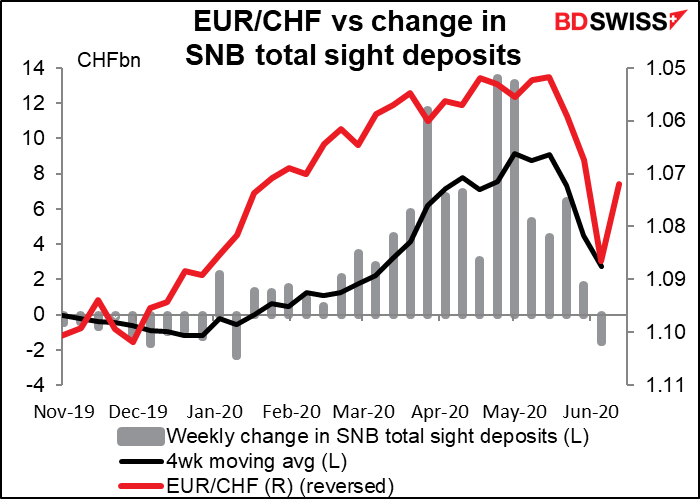 Not much else during the European day until North America starts up again.

I’m not going to bother with a graph of Canada manufacturing sales, as it’s for April and of course all sales everywhere suffered a record fall in April. You know that, I know that, everyone knows that.

Off Canada’s southern border though, the Empire State manufacturing index is expected to continue its rebound in June. It’s expected to move up from “abysmal” to “horrific.” As is Thursday’s Philly Fed index. NY Gov. Cuomo lifted the state lockdown on Saturday (13 June), meaning the recovery in the New York region won’t get fully underway until July. 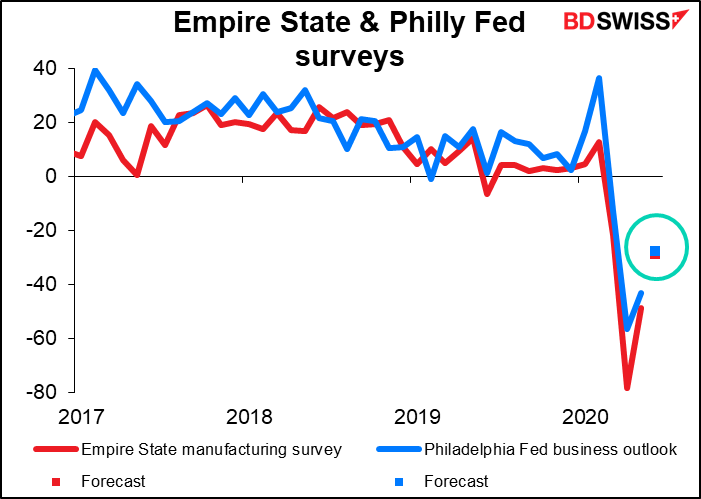 Overnight the Bank of Japan (BoJ) holds its Monetary Policy Meeting (MPM). The BoJ stepped up its easing measures at the March and April MPMs and the unscheduled May meeting. It’s likely to stand pat at this meeting.

In the absence of any policy moves, the market will be looking for any change in BoJ Gov. Kuroda’s view about the fiscal/monetary mix after the Cabinet approved the JPY 117tn second supplementary budget on 27 May, the largest-ever supplementary budget. Up to now Kuroda has been a willing partner in facilitating the government’s borrow & spend policies. He said in a speech on 14 May that the Bank “is determined to do whatever it takes as a central bank while firmly cooperating with the government and foreign authorities.” The market will want to see whether he’s still willing to cooperate with JPY 117tn worth of spending.

There has also been some talk about a “digital yen.” Several major banks and companies recently established a “study group” to look at the possibilities. The market will want to hear what if anything Gov. Kuroda says about this, besides that he’s waiting for the group’s report, which is due out in September.

The BoJ could change the estimated size of its lending program, which was initially estimated at JPY 30tn. But that wouldn’t be considered an easing move as there was never a cap on the size of the program – its size depended on demand.

Finally, we will be interested to hear if anyone from the Fed has contacted the BoJ to ask them about their experience with yield-curve control, which seems to be the next step that the Fed would take if things get worse (as they indeed seem to be).

Then early in the European day Tuesday, as we struggle to get this report out, Britain announces its employment data. Since the data are for April, the market is likely to ignore them. Furthermore, the UK employment data uses a rolling average and so is slow to respond to sudden shocks. Nonetheless, the small expected rise could be positive for the pound as it would show relatively little impact from the crisis. 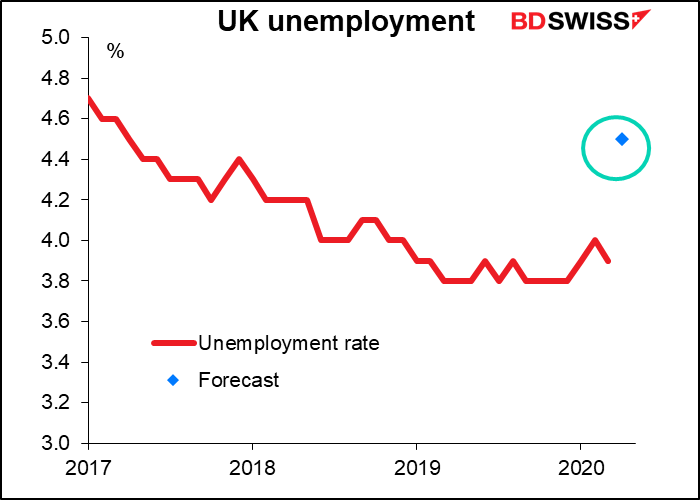 The fall in employment, though expected to be large, wouldn’t be the biggest one on record by any means. 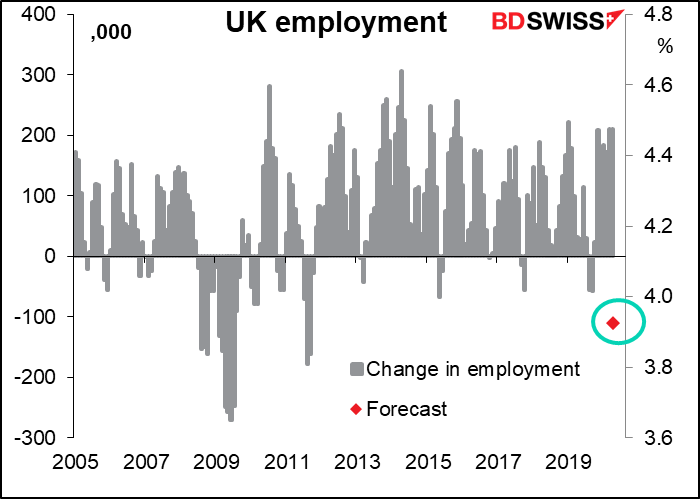 Wage growth is expected to slow precipitously. This is quite the opposite of what’s happened in the US, where more low-waged people have lost their jobs than high-waged people, so the average wage has gone shooting up. Perhaps the statistics are collected differently in the UK, or maybe job losses are spread out differently. 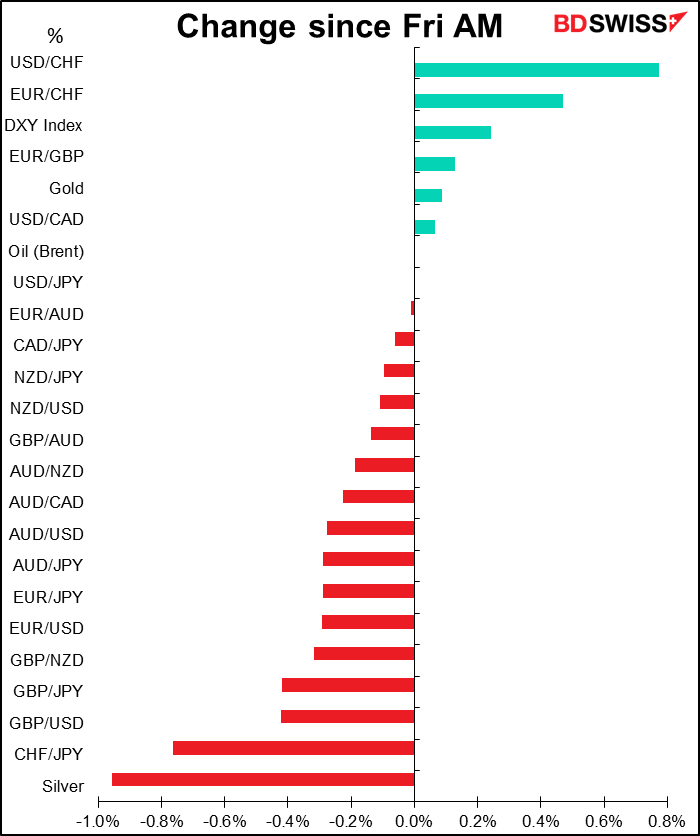