You are at:Home»MARKET PREVIEW»“Risk-off” on Virus fears, AUD down on Lockdown; RBA meeting 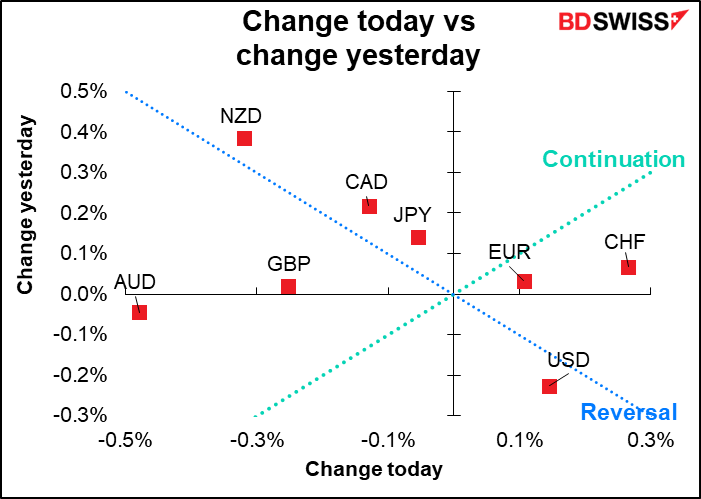 Markets were in risk aversion mode Friday as tech led the retreat in stocks against a backdrop of outlook warnings, regulatory scrutiny, and delta variant concerns that overshadowed broader earnings upside. Headlines in the Washington Post and New York Times headlines discussing breakthrough infections and pointing out that the Delta variant was more easily transmitted spooked investors, not to mention the extension of State-of-Emergency proclamations for Tokyo and new emergency measures across the country, as well as lockdowns in Manila. 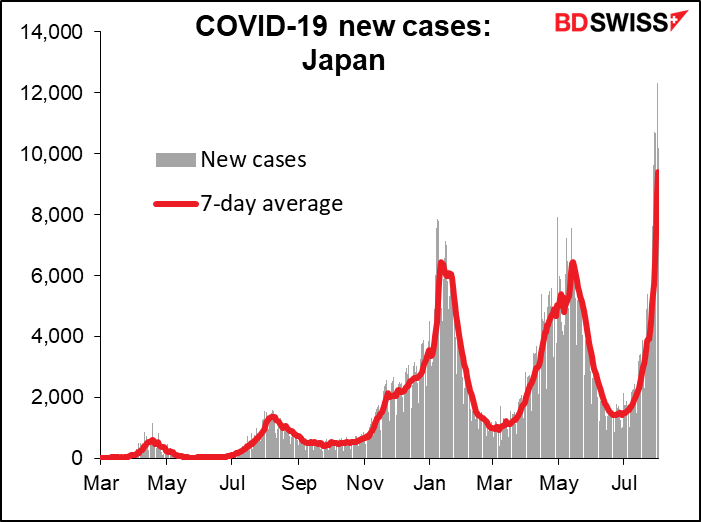 In a measure of how little a role economics is playing in the markets these days, EUR/USD found only temporary support from a huge beat by EU GDP — +2.0% qoq vs +1.5% estimate – plus an upside surprise on headline Eurozone CPI, which rose to 2.2% yoy from 1.9% (2.0% expected) (core CPI however slowed to 0.7% yoy from 0.9%, in line with expectations).

For that matter, better-than-expected US data didn’t have much impact on USD either, nor did it support risk sentiment and growth-sensitive currencies. Personal income and spending both beat estimates (+0.1% vs -0.3% expected and +1.0% vs +0.7% expected, respectively) while the personal consumption expenditue (PCE) deflators both rose by less than expected (headline +0.5% mom vs +0.6% expected, core +0.4% mom vs +0.6% expected). Also inflation expectations in the final U of M index ticked lower (to 4.7% from 4.8% in the 1-year and 2.8% from 2.9% in the 5-10yr).

AUD was the biggest loser among the commodity currencies as soldiers began patrolling the streets of Sydney to enforce stay-at-home rules. PM has promised lockdowns would be “less likely” once 70% of the adult population has been fully vaccinated, but that’s a long way off — currently only about 20% are – and seems more like a threat than a promise. This news pushed AUD/NZD through the 1.0540 support level as expectations build for a dovish RBA meeting Tuesday (see below).

It finally happened – after weeks of cutting their net short USD positions, specs went significantly long  USD for the first time since March last year. (Notice that qualifier “significantly”– I confess that they had a tiny net long USD position last week of $324mn but I didn’t notice it. Mea culpa! Now it’s some $3bn, which is significant.) 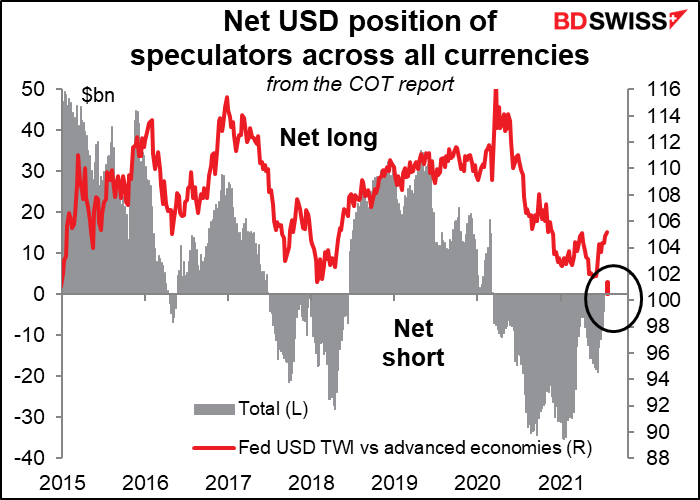 Most of the change came through further reduction of long EUR positions, then a reduction in long CAD and an increase in short JPY. It’s significant that they’re going long USD and more short JPY – it’s therefore not a “risk-off” move but rather a “monetary policy divergence” trade. (They also increased long CHF, which could be a “risk-off” move.) Specs also lost enthusiasm for the other two commodity currencies, cutting their long NZD positions further and adding to short AUD. 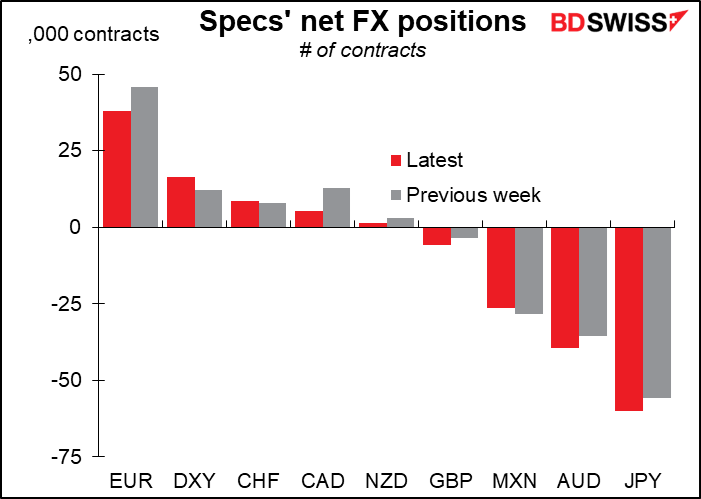 Hedge funds had a different view – they added to long MXN and AUD positions while trimming their short JPY and EURs. Their biggest moves though were cutting long CAD, GBP, and NZD. 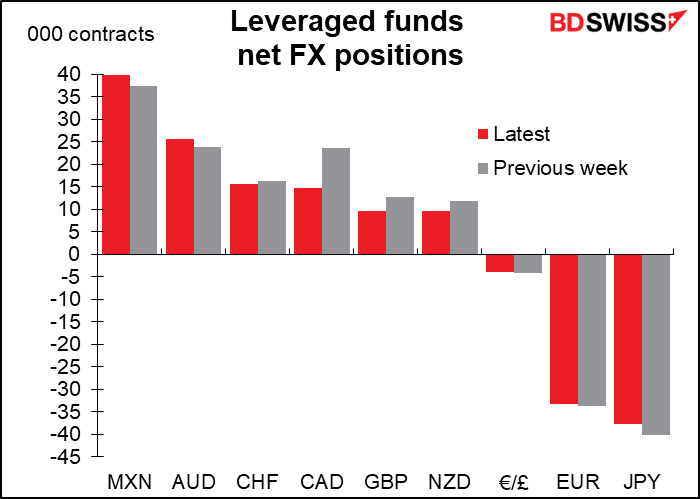 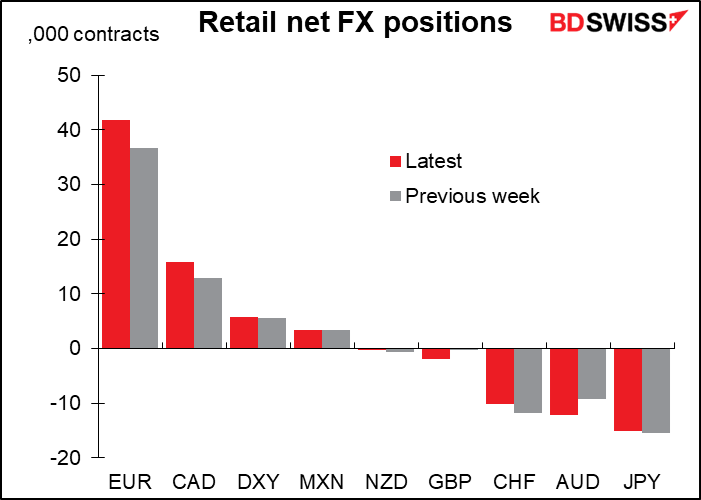 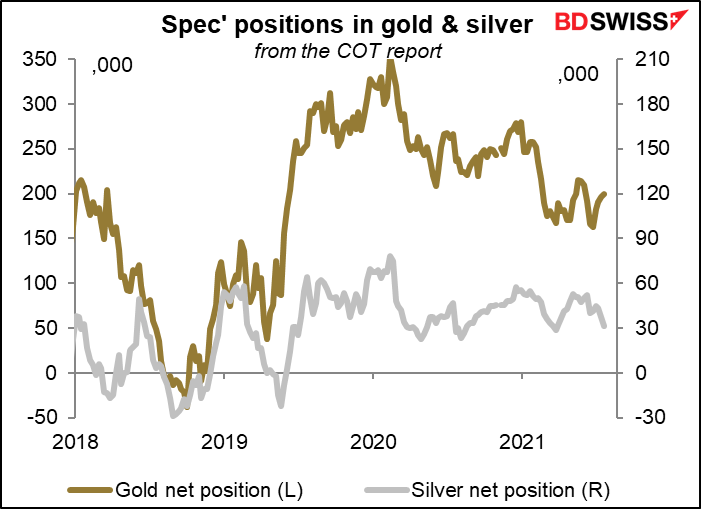 The number of open gold contracts has been climbing recently relative to the number of silver contracts. This could be a sign that gold is once again going to appreciate significantly relative to silver (although you can see from 2019 that it doesn’t always happen that way). 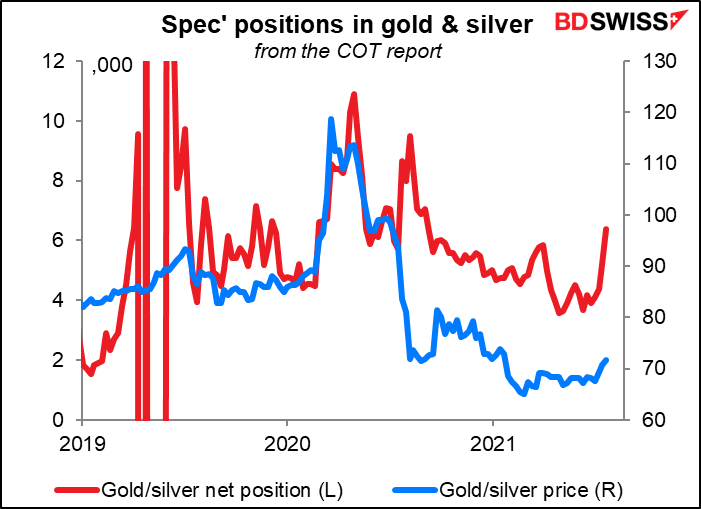 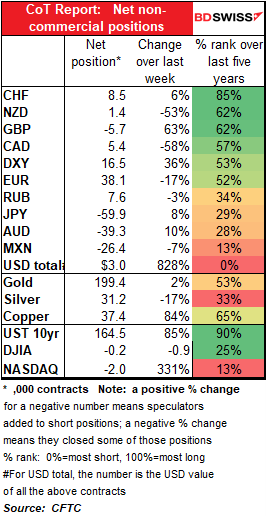 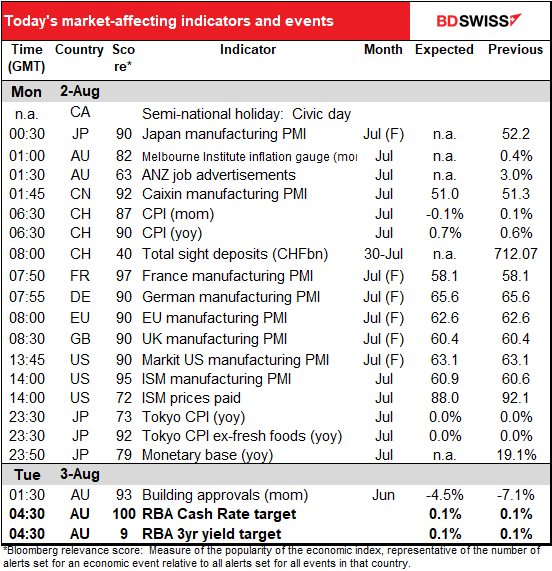 Another tiny rise in Swiss sight deposits even as EUR/CHF moves inexorably lower! What’s the Swiss National Bank doing? Setting up a bear trap? This is only smoothing action at best. When will they come in and wallop the market? 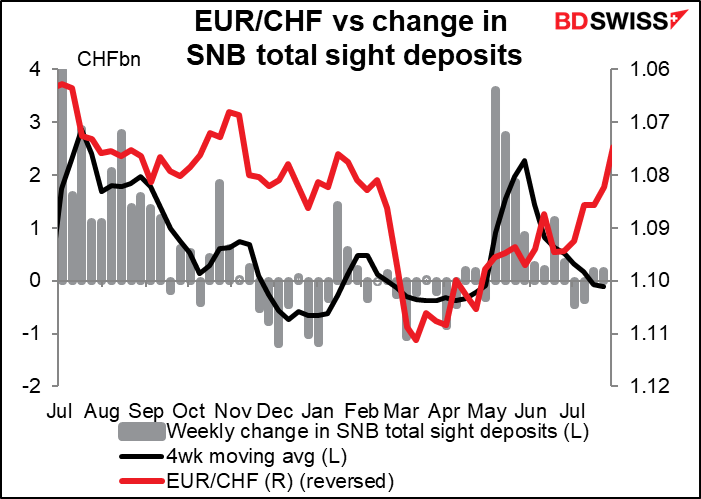 Next is the manufacturing purchasing managers indices (PMIs), including the final version for those major countries that have preliminary versions.

Attention in the US will focus on the Institute of Supply Management (ISM) and its version of the manufacturing PMI which, while not as accurate as the Markit version, has a longer history (since 1948) and is therefore better established in the US. It’s expected to be up a little bit, which is pretty good considering how high it is already. New orders, which are even higher, are expected to fall a bit; that’s good, because an order backlog like that would mean higher prices, which no one wants. 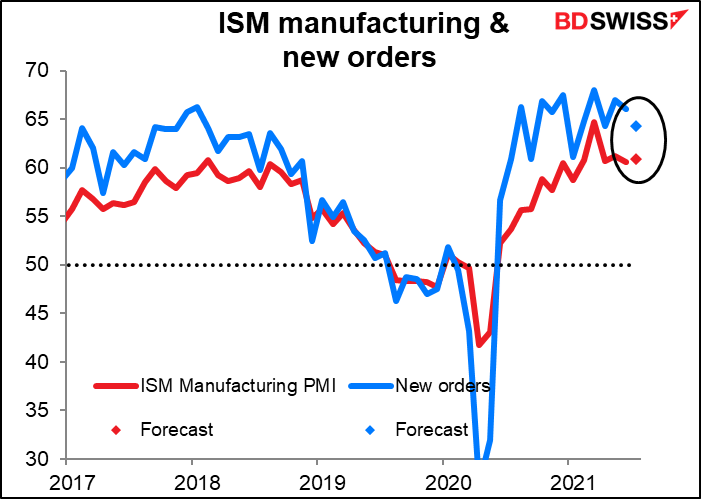 Similarly, the prices paid index is expected to fall back too, another sign of waning inflationary pressures.

This would be a definite risk-positive combination: increasing economic activity with decreasing inflationary pressures. The opposite of the “stagflation” fears that people are starting to talk about. I think this would be good for stocks and negative for USD. 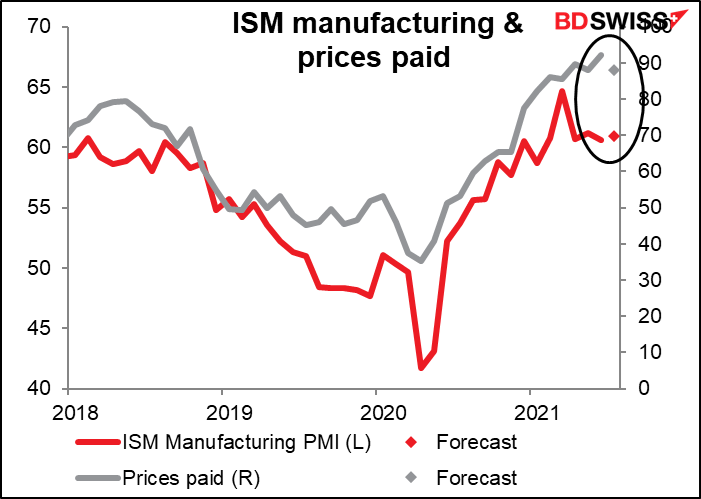 Then nothing major on the schedule until overnight when we get the Tokyo consumer price index (CPI). Both measures are expected to be unchanged yoy, as indeed is the “core-core” CPI (excluding fresh food & energy, not shown). Japan remains the outlier in a world wondering whether the recent spate of above-target inflation is just “transitory.” Alas this figure won’t have much impact on JPY, because no one dreams that the Bank of Japan will take any new measures to deal with below-target inflation. 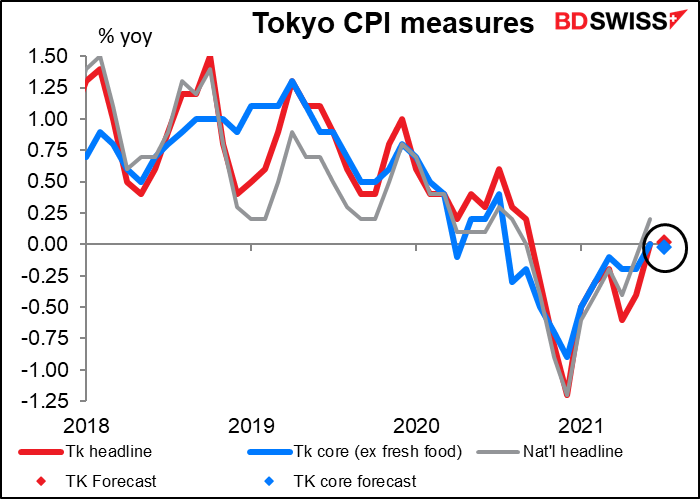 Australia building approvals are expected to be down mom for the third month in a row, but not by as much as in the previous two months. This is no surprise as a lot of building was brought forward in response to the Federal HomeBuilder scheme – last month, approvals were 24% higher than their pre-pandemic peak. I don’t think anyone will be particularly perturbed by this figure, especially as it comes three hours before the highlight of the day. 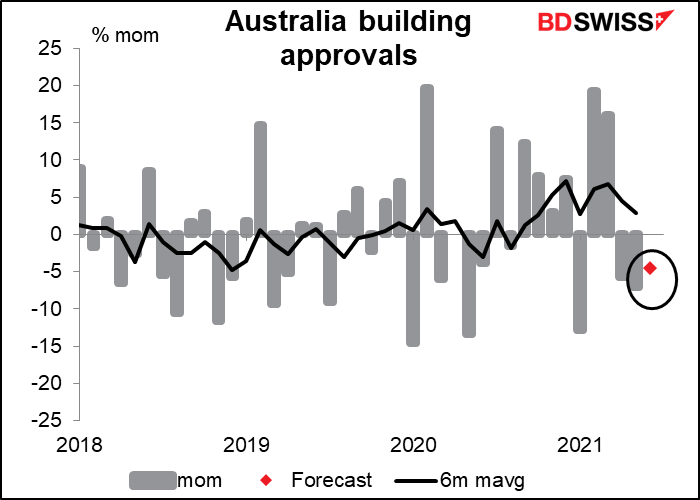 The Reserve Bank of Australia (RBA) meets today. I’ve written a more extensive piece on this, which you can see on our website here. Here’s a summary:

The main topic of discussion at today’s meeting will be the implications of the rise in COVID-19 cases and the extended lockdown in Greater Sydney, which will last at least until Aug. 28th. The area accounts for at least 21% of Australia’s population and so this is truly a Big Deal for the country. It’s likely to cause the economy to contract in Q3, although there would then be a stronger rebound in Q4 when Sydney reopens. 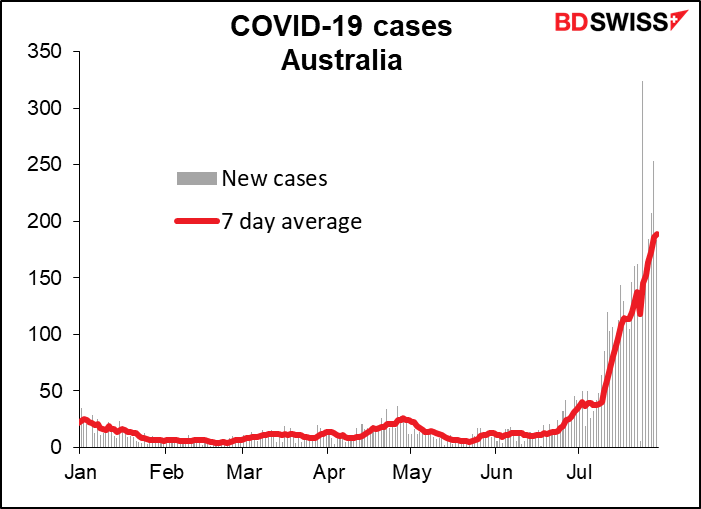 This makes it likely that they’ll revise down their forecast for 2021 growth in the updated Statement on Monetary Policy (SMP), which will be released on Friday. The main points of that are usually included in the statement following the meeting. 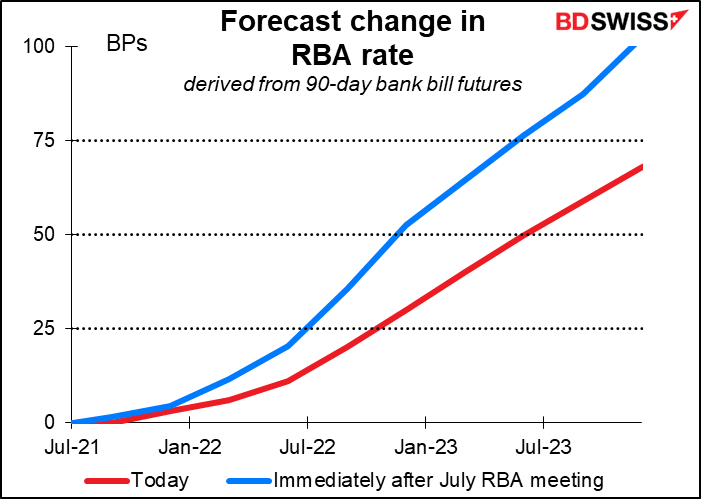 Or they could rescind last month’s decision to cut the pace of purchases after September. They decided that after the second tranche of AUD 100bn bond purchases runs out at the end of September, they would continue to buy bonds but at the reduced pace of AUD 4bn a week rather than the current AUD 5bn. They justified this decision by saying that “the economic outcomes had been materially better than earlier expected and the outlook had improved.” What if the outlook has now worsened? 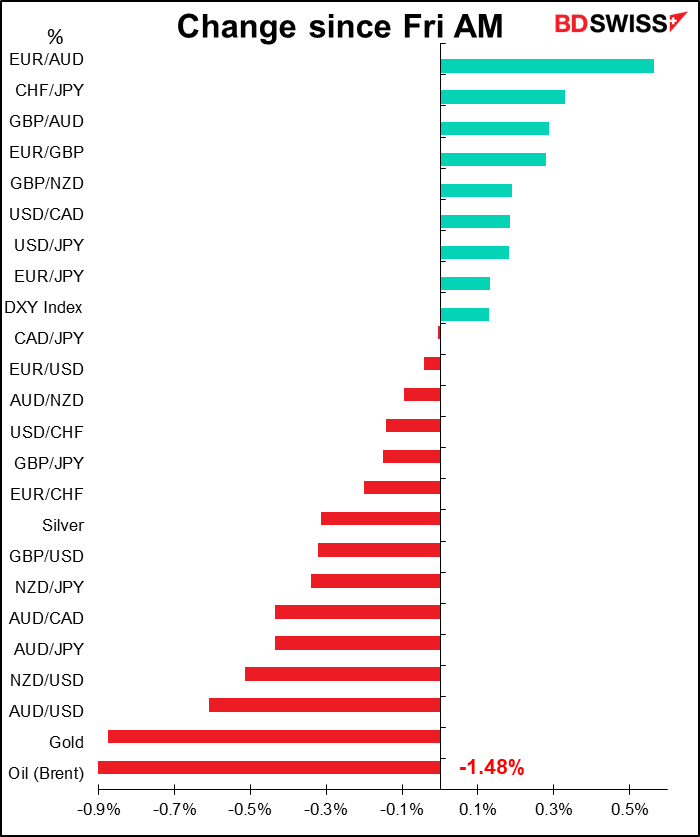