You are at:Home»MARKET PREVIEW»AUD Up as RBA stands pat; NZ Employment Data Well, I was wrong about the Reserve Bank of Australia (RBA) but looking at the market’s reaction, I think everyone else was, too. The RBA was widely expected (read: I expected) them to loosen policy or at least to put on hold plans to tighten policy in the wake of a massive, long-lasting lockdown in Sydney. However, they kept all their policy measures intact, including the plan to begin tapering down their bond purchases in September. Their reasoning was that the problems in Sydney are just a temporary interrpution to the recovery and once they’re over, things will be back on track.

The economic recovery in Australia has been stronger than was earlier expected. The recent outbreaks of the virus are, however, interrupting the recovery and GDP is expected to decline in the September quarter. The experience to date has been that once virus outbreaks are contained, the economy bounces back quickly. Prior to the current virus outbreaks, the Australian economy had considerable momentum and it is still expected to grow strongly again next year.

AUD got a big boost from this news. However I doubt it will last long. Looking at what happened to oil overnight, it appears to me that the market is concerned about the outlook for commodities. I expect some profit-taking or perhaps the opening of new short positions to push AUD back down somewhat.

Speaking of oil, it was down on fears about the dreaded delta variant, which is causing many countries to reinstate restrictions or even go back into lockdown. The fall in oil hit CAD particularly hard on a day when AUD was soaring, hence AUD/CAD was the biggest mover.

Overall, fears about the virus kept markets nervous. While stocks closed little changed in NY, real yields continued to decline, moving further into record low territory on an intraday basis. A weaker-than-expected manufacturing purchasing managers’ index (PMI) from the US Institute of Supply Management (ISM) (a fall to 59.5 from 60.6 previous, vs rise to 61.0 expected) dampened risk sentiment, while a much lower-than-expected prices-paid index (85.7 vs 89.0, 92.1 previously) helped to assuage the market’s ever-present inflation fears. A word about the virus….

The markets are deeply concerned about the delta variant. Now as I’ve insisted all along, I’m no doctor so I can’t claim any expertise in this matter, but it seems to me that the delta variant is not the huge threat that we think it is. Yes it accelerates tremendously, but then it seems to burn out quickly and decelerate just as rapidly. That happened inexplicably in India, where few people are vaccinated… 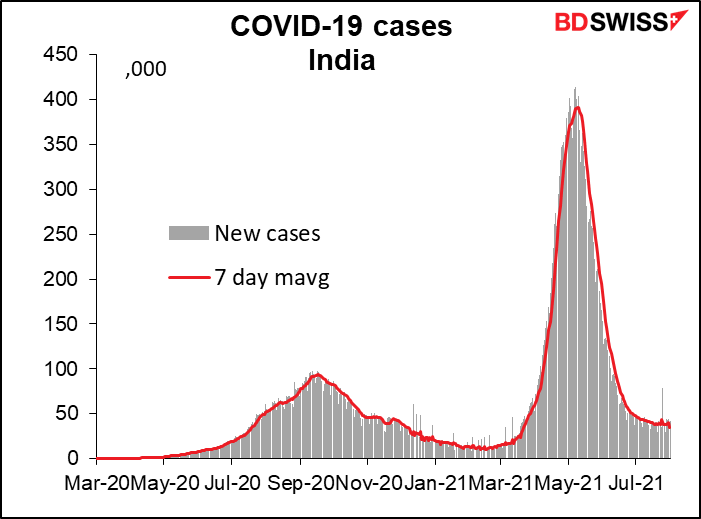 …and also in the UK, where many people are. A few weeks ago, when the UK’s new daily-case total was around 60,000, the prominent British epidemiologist and government adviser Neil Ferguson forecast that a rise to 100,000 a day was “almost inevitable” and that 200,000 possible. The country is now at 27,000 and falling. 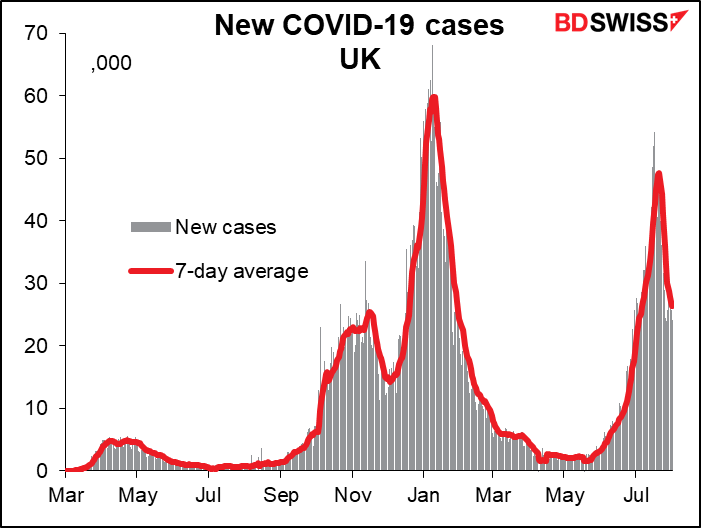 Moreover, deaths never surged the way cases surged, probably because the most vulnerable populations – the elderly and those with underlying conditions – got vaccinated first. 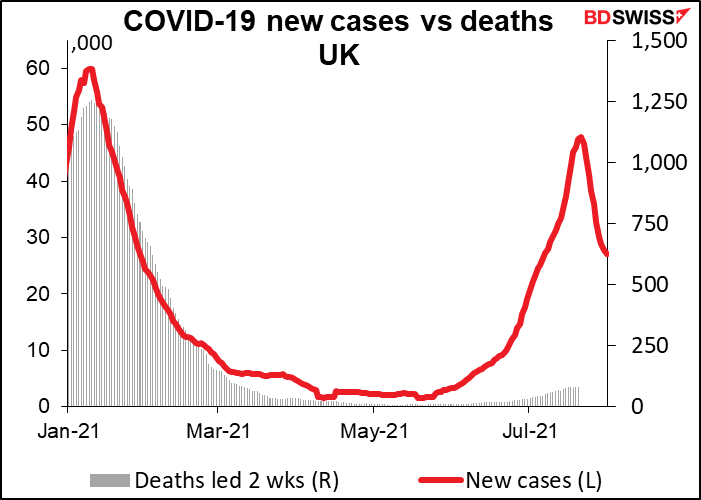 Ditto for the Netherlands, which has also seen a rapidly receding surge with no accompanying surge in deaths. 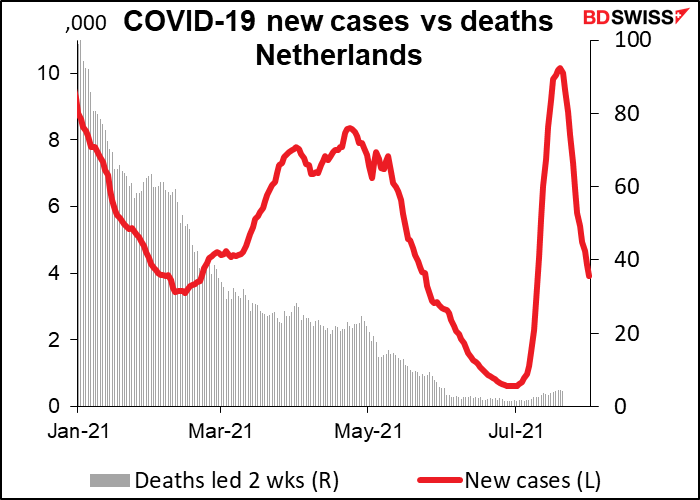 The bottom line is, the delta variant doesn’t seem to be the death knell for civilization that is feared. As Dr. Eric Topol said recently, “However efficient the virus is, it’s not capable of reaching everyone, just as the 1918 flu pandemic didn’t get to everyone.” “These pandemic pathogens burn through a population, but they invariably leave many behind who are vulnerable,” he said.

In short, with populations reaching some measure of herd immunity relatively quickly through either vaccination or exposure, I think the virus could recede as a market factor in a few months and we could be back to some semblance of normality. If nothing else, economies could open up with people still having to take precautions. That would still be better than periodic lockdowns. Nothing exciting in Indicatorland during the European day.

Canada’s manufacturing PMI comes out a day after everyone else’s did because yesterday’ was Civic Day in Canada, a day that’s a holiday in some places in the country but not others, apparently. No forecast available. 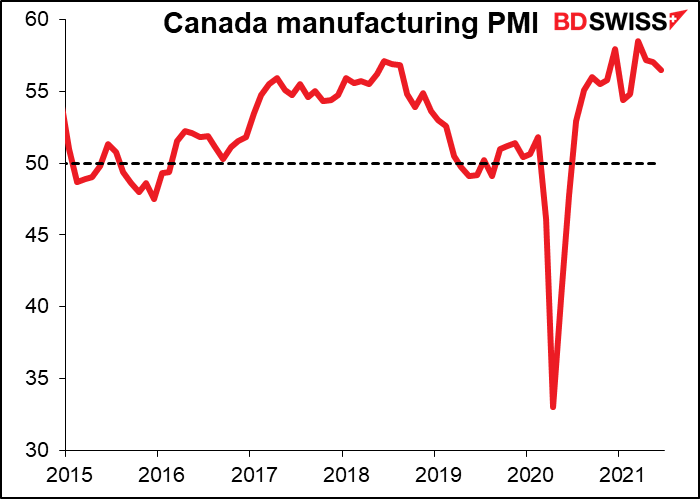 US factory orders have a relatively high Bloomberg relevance score so I always mention them, but I think they’re pretty boring as they’re largely a function of durable goods orders, which have already come out. Anyway they’ve been on a good streak and although this month’s rise is supposed to be less than in the previous month (in line with durable goods, which were up 0.8% mom in June vs +3.2% mom in May), they would still be some 7.9% above pre-pandemic levels to the highest level since June 2014, hence a good result that should be “risk-on.” 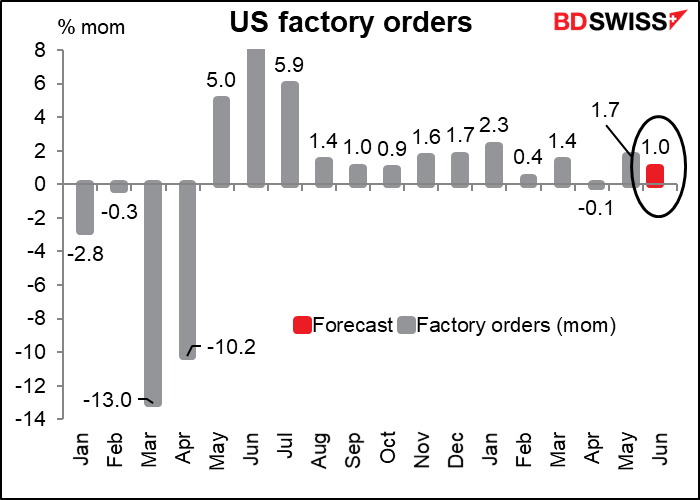 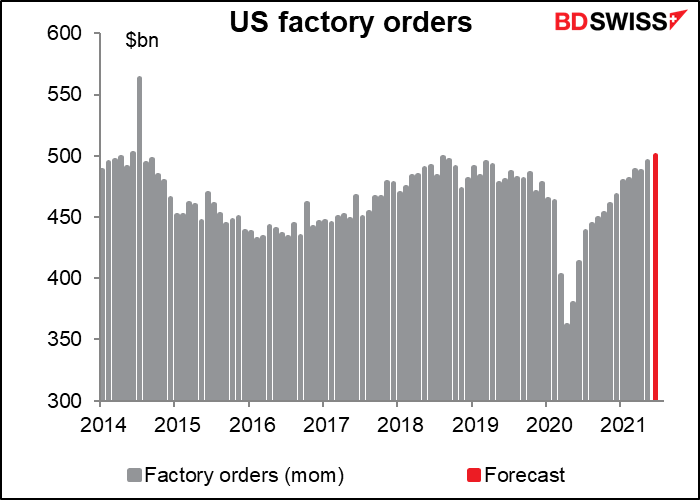 Then nothing on the schedule until New Zealand wakes up and they announce their employment data. This is of course a biggie for them since a) the Reserve Bank of New  Zealand (RBNZ) has had a “dual mandate” since April 2019 and b) this data only comes out quarterly. Just to remind you, Section 2(a) of the RBNZ’s remit says that one of the RBNZ’s two operational objectives “shall be to…

Just by eyeballing the graph you will quickly note that even after these fairly good figures the unemployment rate, forecast to be 4.4%, will still be above the 2019 average of 4.10%. So on that definition it’s hard to argue that they’ve reached “maximum sustainable employment.” 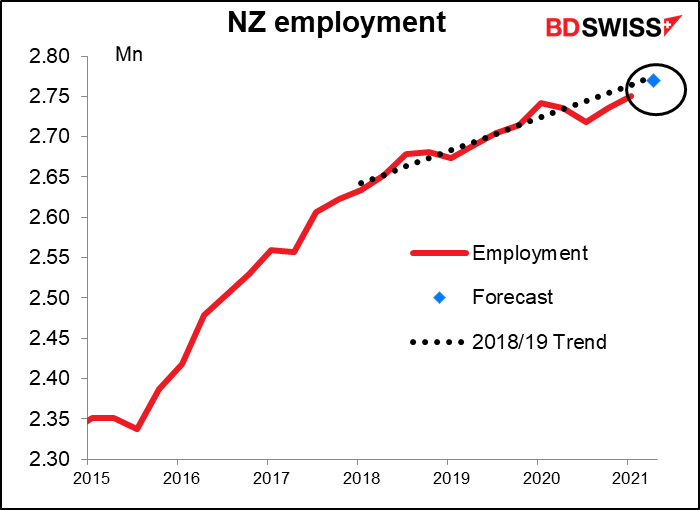 With inflation already outside their target range and employment back to the trend level, what justification do they still have for keeping their ultra-loose policy? 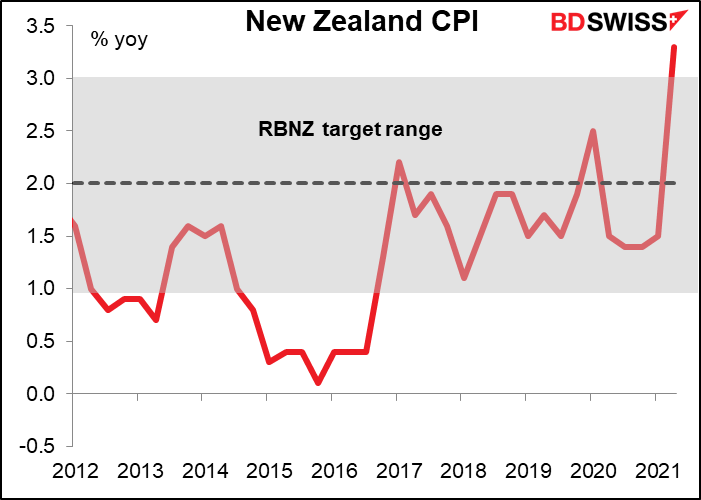 Admittedly, the remit also says they shall “discount events that have only transitory effects on inflation, setting policy with a medium-term orientation.” And the market seems to have confidence in the RBNZ’s commitment; the 10-year breakeven inflation rate isn’t even up to the middle of their 2%-3% target range. 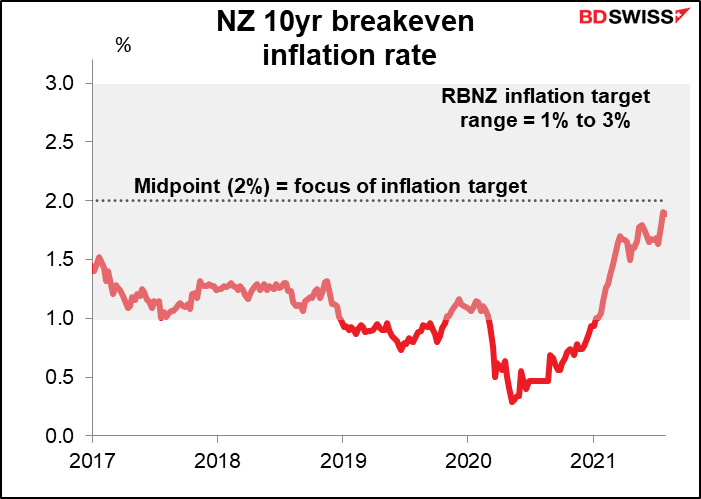 In any event, the fact that we are even asking the question of whether they’ve hit “maximum employment” at the same time as the inflation rate is outside their target range may be one of the reasons why the market is forecasting three rate hikes within the next year. 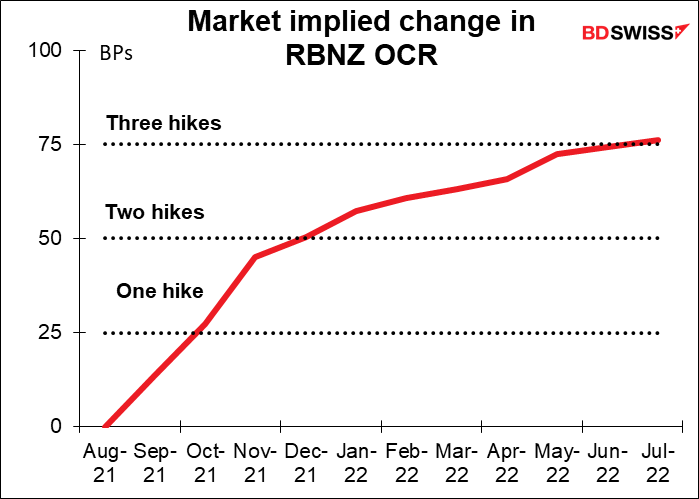 In short, although the unemployment rate isn’t expected to return to pre-pandemic levels yet, I think the rise in employment to a record level would be a significant milestone for the RBNZ and this figure would be positive for NZD. 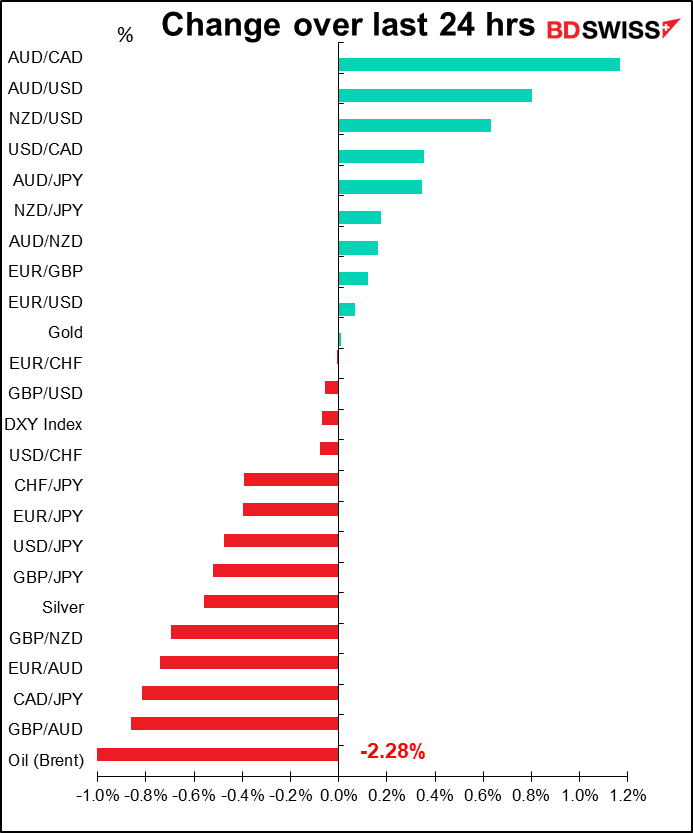