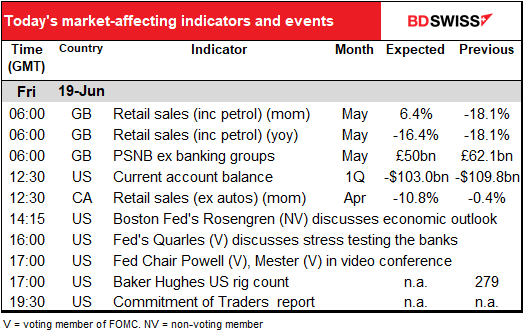 The Bank of England did what everyone expected – raised the limit on its Asset Purchase Facility (APF) by GBP100bn to GBP 745bn. So why the big fall in GBP? Because it said the facility would be filled “by the end of this year”. That implies a big slowdown in the rate of growth. If purchases continued at the current pace of around GBP 13.5bn a week, the newly enlarged APF would be filled by 4 September. By saying that purchases will end at the end of the year, that implies a slowdown to around GBP 5.8bn a week. Moreover, BoE Chief Economist Haldane voted against the increase, indicating that there is some debate on the Monetary Policy Committee about what to do next. And BoE Gov. Bailey said negative rates were not discussed at the meeting. 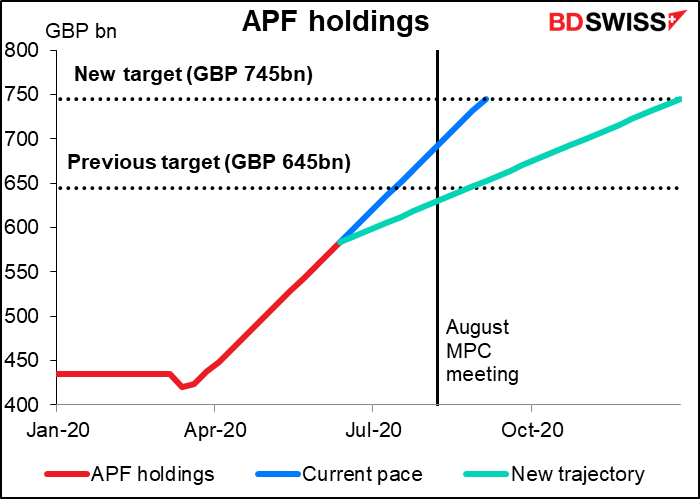 Note though that the market’s reaction was the opposite of what one might have expected. Usually, a looser monetary policy causes a currency to weaken and a tighter policy causes it to appreciate, especially in conjunction with a loose fiscal policy, which is what we have now. Slower-than-expected quantitative easing (QE) plus some doubts about further easing steps is a tighter-than-expected monetary policy. 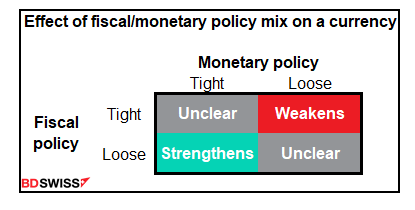 The fact that the currency weakened under these circumstances rather than strengthening suggests that the market is focusing on recovery and growth prospects, not monetary policy per se. A less accommodative BoE could mean a less rapid recovery.

In that respect, the statement following the meeting was mixed. While the BoE echoed observations from the Reserve Bank of Australia and the Bank of Canada that the trough of activity was in April and was not as bad as feared, the BoE also echoed the cautious comments of Fed Chair Powell on the outlook for employment.

“There is a risk of higher and more persistent unemployment in the United Kingdom,” it said in the statement. “Even with the relaxation of some Covid-related restrictions on economic activity, a degree of precautionary behaviour by households and businesses is likely to persist. The economy, and especially the labour market, will therefore take some time to recover towards its previous path.”The MPC also noted that “CPI inflation is well below the 2% target and is expected to fall further below it in coming quarters, largely reflecting the weakness of demand.” 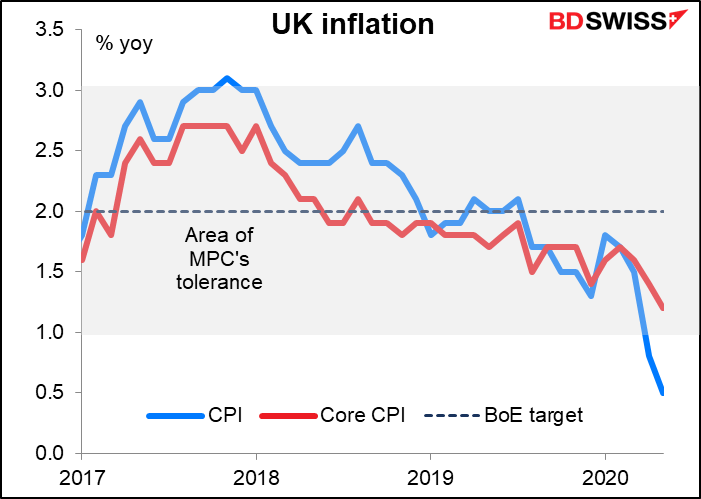 Given these concerns, I wouldn’t be surprised to see further easing moves at the August meetingg, when the next Monetary Policy Report (MPR) containing new forecasts will be released. If not, and if a “no-deal” Brexit seems likely, then action at the November meeting, with another MPR, seems likely. The MPC didn’t rule out further action; on the contrary, they specifically said “The Committee will keep the asset purchase programme under review.” They could also reduce the Bank Rate to zero from the current 0.10%.

Speaking of further action, the European Central Bank (ECB) allotted EUR 1.3tn in the fourth Targeted Long-Term Refinancing Operation (TLTRO III), close to what officials had suggested beforehand. The operation provides three-year money at a rate of -1% (i.e. the ECB pays the banks to take it) if the banks beat certain lending benchmarks. There’s another funding operation that’s maturing, so the net amount of new lending is estimated at around EUR 550bn. That’s a significant amount. Note how EUR strengthened, again the opposite of the textbook response to an increase in the money supply. In a situation where everyone’s interest rates are around zero and everyone is printing money as fast as the presses will fly, support for the economy outweighs traditional metrics for judging relative value in foreign exchange markets.

In that respect, today’s European Council summit of EU leaders will be the key event of the day. The EU recovery fund and the bloc’s long-term budget for the next seven years are the main topics, along with EU-UK Brexit talks. There’s little hope for an agreement on the recovery fund any time soon, particularly after the “Frugal Four” wrote that op-ed article in the FT that I referred to yesterday in which they reiterated their opposition to grants. The issue will have to be thrashed out at a later summit, possibly next month, although one hasn’t been scheduled yet. Remember that agreement has to be unanimous on these issues so even tiny Austria can in effect veto the German-French proposal.

Elsewhere, there was a general “risk-off” mood in the FX market, with USD, JPY and CHF higher and the commodity currencies lower, although not that much. The proximate cause was the higher-than-expected US jobless claims and the worsening virus figures from several large states, such as California and Texas. But most stock markets are up in Asia this morning and the S&P 500 is indicated at +0.3%, so I would expect a reversal in those moves today – the commodity currencies could gain while JPY may well weaken.

The morning’s European news – UK retail sales and public sector borrowing – will no doubt be out by the time you read this.

So then we have to wait for North America to open up and US current account. Not a biggie for traders, although analysts like to look at it to see how flows are going. The narrowing of the current account deficit is definitely a dollar-positive event, although this is history by now. Nonetheless it may explain to some degree the strengthening of the dollar in Q1. 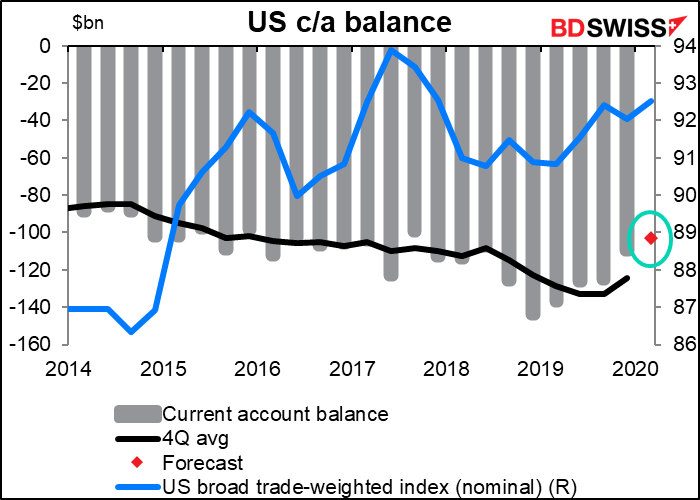 Another retail sales figure – this time from Canada. Unfortunately this is for April, while China, the US and the UK have all announced their May retail sales this week.
As usual, there’s no point graphing the mom rate of change, which is what the market is forecasting. The previous drop was -3.2% back in April 1994, so today’s forecast 10.8% drop would just dwarf everything. Better to look at the level – the forecast is for sales to have dropped back to the level of five or six years ago. 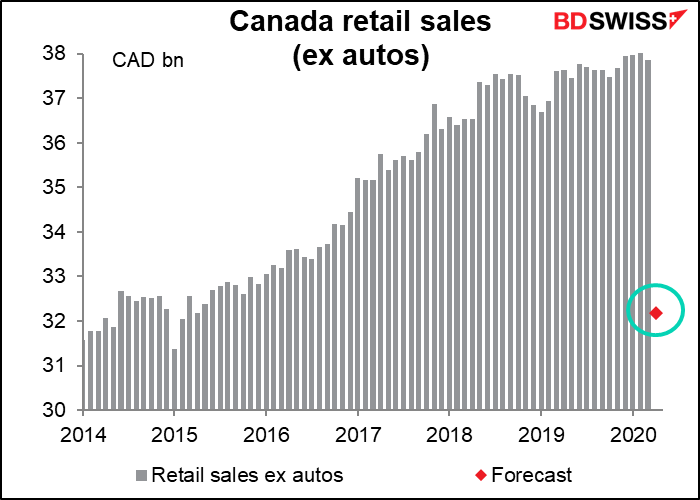 Finally, while Europe is out celebrating the weekend with, I hope, proper social distancing and wearing masks, Fed Chair Powell will appear with Cleveland Fed President Mester in a video conference focused on building a resilient workforce in the era of COVID. It’s focused on Youngstown, Ohio, a mid-sized city (67,000) not far from where I grew up. A GM auto plant nearby, once the towns main employer, closed down in March of last year, leaving a depressed town that was a byword for post-industrial wasteland. The city has been undergoing somewhat of a renaissance recently – or at least it was, until the virus hit – although it still has a 35% poverty rate. The GM factory was sold to an electric vehicle manufacturer, which is still in the design phase. 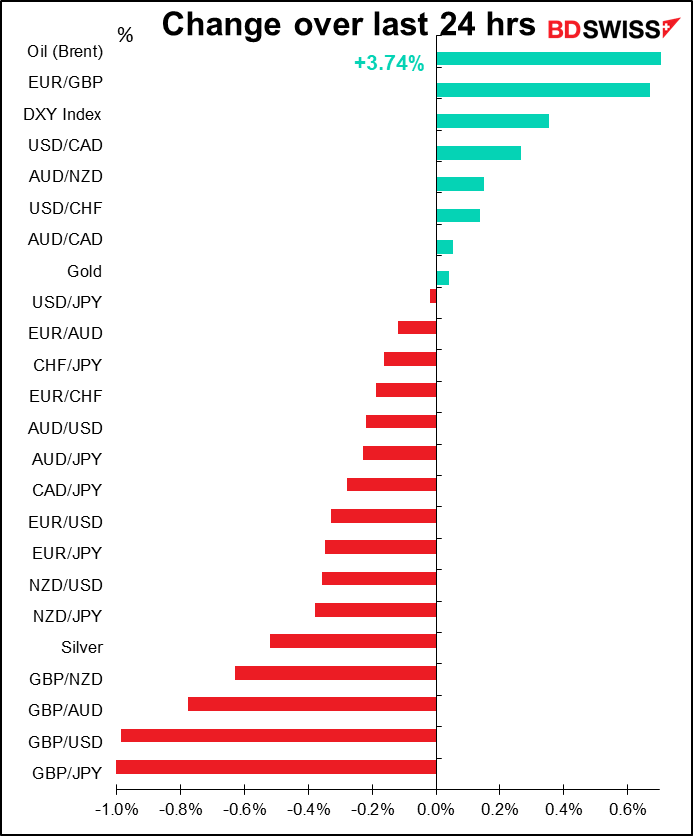