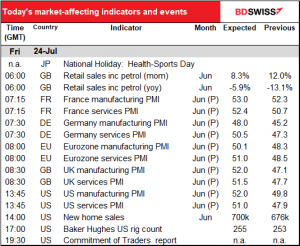 Market Recap
It was a big “risk-off” day yesterday thanks to deadlocked EU-UK Brexit talks, an uptick in the weekly US jobless claims, the inability of Republicans to agree on a position on the CARES 2 negotiations, and especially, heightened tensions between the US and China. Following the Trump regime’s decision to shut down China’s consulate in Houston, US Secretary of State Pompeo made a speech declaring US engagement with China to be a dismal failure. Nice! The market was waiting for China to retaliate. In response, China this morning ordered the US to close its consulate in the southern Chinese city of Chengdu, a key location for gathering information on Tibet. This had been identified as the most likely move if China didn’t want to escalate the spat with the US (vs closing the consulate in Hong Kong, which would have been a much more severe move). Accordingly this should be seen as a “risk-on” move and encourage the commodity currencies vs JPY, CHF and the dollar. However, that doesn’t seem to be the case. On the contrary, the S&P 500 futures are indicated down 0.4% from the close, which was already down a substantial 1.2%. Perhaps the implications will be reconsidered later on in the day and we will have a reversal of these knee-jerk reactions.

Against this unnerving background, the safe-haven JPY and CHF benefitted, the commodity currencies fell, and gold hit the highest level since September 2011. Oil fell as well.

One surprising point: EUR/USD rose nonetheless. Recently, USD has been the main “safe haven” currency and would generally be expected to rise in such a case. This suggests to me that as the “fiscal cliff” approaches in the US, the “domestic dollar” may be taking precedence over the “international dollar;” that is, the domestic problems facing the US are overwhelming the advantages that the US has on the international stage and dragging down the US currency. Up to now the EUR/USD rally has been largely fueled by speculators and other fast-moving market participants, but it looks like real-money investors, who operate on a longer-term horizon, are starting to get involved. That would be particularly bullish for EUR.

GBP managed to gain vs a weaker USD although it fell vs EUR. As expected, the UK-EU Brexit negotiations broke up with no agreement and mutual finger-pointing. Although there were a few promising signs on several points, such as how to govern a future agreement and the question of UK participation in EU programs, they remain far apart on the big issues that have been preventing progress so far. Both sides said they thought an agreement is unlikely. I think that if past performance is any indication of future performance, the talks are likely to go down to the wire, at which point Boris “The Big Umbrella” will fold, giving in to the EU’s demands in order to avoid a catastrophic “no-deal” Brexit. (You can read The Big Umbrella in its original format here, or an easier-to-read version here.)

Yesterday the NY Fed revised down its weekly economic index as more information became available. It’s now turning down slightly; the latest week at -7.08 is a bit below the previous week (-6.99). 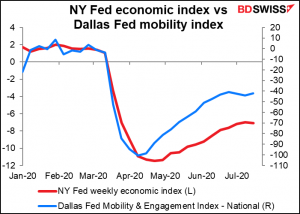 The number of US travelers has also started to fall again: 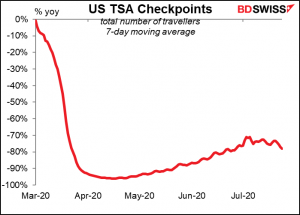 Today we’ll get an update of the Dallas Fed’s Real-Time Population Survey, which will give us a more up-to-date view of the labor market. The last update was 2 July.

The key point is that the Eurozone, the UK and the US are all expected to be above the 50 “boom or bust” line, i.e. move into expansionary territory. Of course everything is relative. Things were so bad before, it doesn’t take much of an improvement for them to be better. But at least it looks as if the worst is over and the world is back on an expansionary track. This could help to reestablish a “risk-on” environment if, as I expect, people reconsider the implications of the Chengdu consulate closing to be a positive and not a negative. 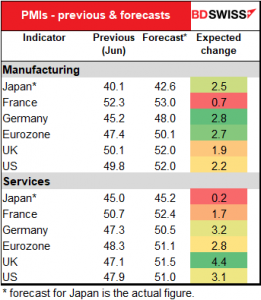 Australia announced its figures overnight – I don’t include them in the table, because no one watches them particularly closely. They were already above the 50 line and showed a continued recovery, as might be expected with the country released from lockdown until quite recently. Manufacturing was up 2.2 points to 53.4 and services up a sharp 5.4 points to 58.5.

Japan is an outlier here. Japan’s PMIs came out a few days ago – it’s still below 50 on both the manufacturing and service sector. Moreover it showed almost no improvement in the service sector. Their economy has been particularly hard-hit by the downturn in global trade. Next week’s Japan industrial production figures are expected to be dismal.

US new home sales are expected to rebound by 3.6% mom. This is much much less than the 21% increase that actually happened with existing home sales. I would guess that the difference is because existing home sales fell by so much more to begin with. In any case, it should confirm that housing is one of the few bright spots for the US economy despite the extraordinary unemployment conditions. 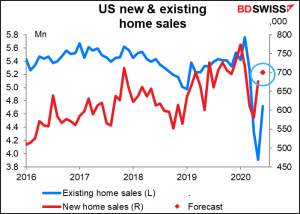 The Baker Hughes rig count is expected to show a small increase of two rigs, which would be the first increase since March. This would be proof of the adage in the oil industry that “high prices cure high prices,” i.e. supply expands when prices rise, which ultimately puts downward pressure again on prices. Nonetheless I don’t think two more rigs are going to make a whole lot of difference to the US oil supply. 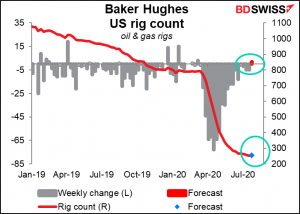 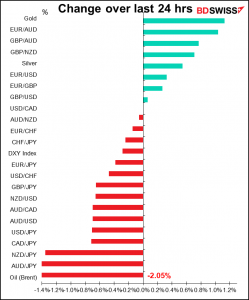