You are at:Home»MARKET PREVIEW»EUR, Silver Continue to rally in “ Risk-off” Mood; US Jobless claims 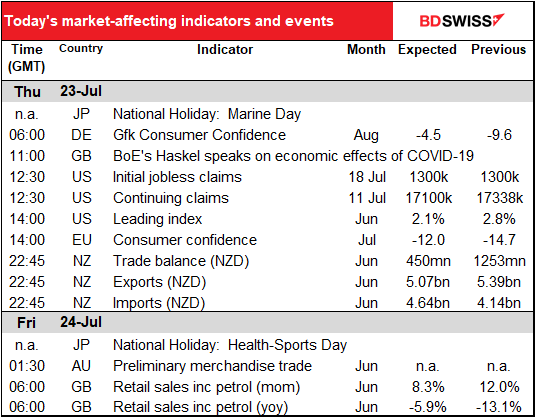 Trump’s sudden decision to order China’s consulate in Houston to close – and headlines suggesting Beijing was considering shutting the US consulate in Wuhan in retaliation — caused the day to start with a risk-off mood yesterday. By the end of the day, sentiment was bolstered by news that the Republicans were considering a separate unemployment benefits bill to tide the US public over while negotiations over the main bill, which expires at the end of the month, continue.

EUR/USD continued to gain, briefly poking its nose over 1.16 before corporate and hedge fund selling pushed it back down. Is this a EUR rally or a USD rout? Probably a bit of both as EUR/JPY and EUR/GBP also gained, albeit EUR/CHF fell slightly.

Further examination of the EU’s momentous agreement on the Recovery Fund has only bolstered the implications of the agreement for the euro. In particular, the market has noted that the decision to issue a large amount of EU-wide debt will result in a new, triple-A-rated EUR asset that central banks can buy for their reserves – a boost to the role of the euro as a reserve currency, which has been fairly steady at around 20% in recent years. Sentiment towards EUR was also bolstered by news that the EU would ease parts of MiFID regulations in order to encourage more investment. 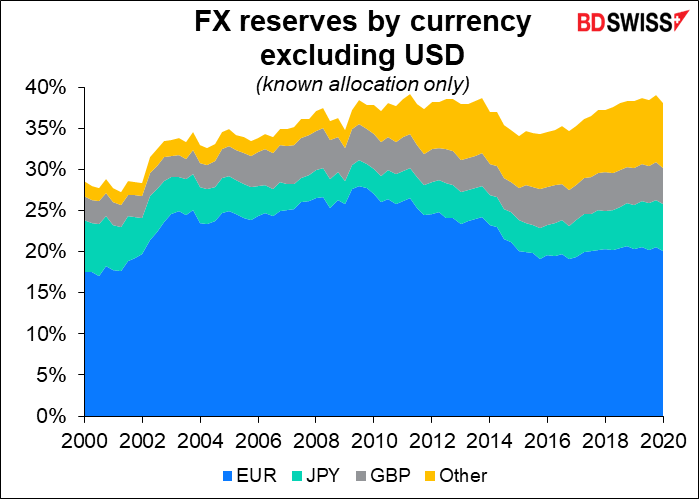 On the other hand, USD weakened in general as US real interest rates fell to a record low and high-frequency data showed the US employment situation worsening (see below). 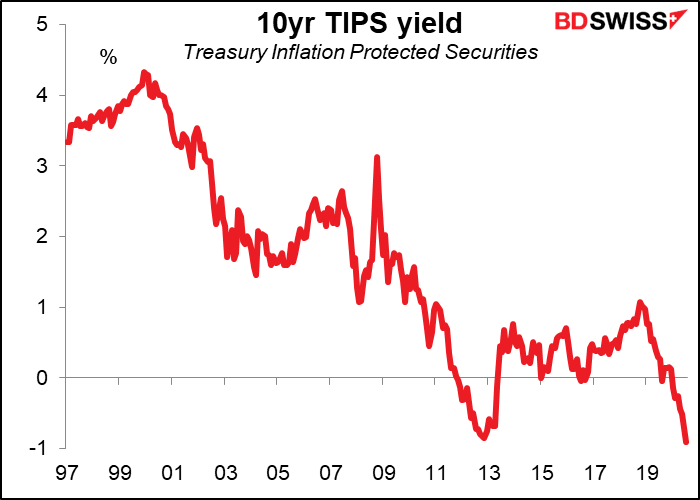 The EUR/USD rally was fairly smooth with few jumps during the day, which implies that investors are slowly accumulating long positions. Retail clients were said to be buying EUR/USD, while hedge funds were buying EUR on the crosses.

GBP lost ground on renewed Brexit pessimism. There were press reports that the UK has given up hoping for a trade agreement with the US this year. Meanwhile, talks with the EU aren’t going particularly well, either. There was a story in the UK Telegraph, a newspaper with a strong Conservative Party bent, that said “the Government’s working assumption is now that Britain will have no trade deal in place when the transition period ends on December 31…” The UK side is now focused on ensuring that the EU takes the blame for the failure, not trying to achieve a settlement. The EU-UK talks are expected to end today with both sides still far apart. UK chief negotiator Frost will reportedly offer to hold an emergency round of talks next week in an effort to avoid blame for the failure. We should watch the tone of the statements coming out of today’s final meetings to see if they are of a conciliatory or confrontational nature.

Silver continued its astonishing run. One of the reasons it’s doing so well is because the recent focus on “green recovery” is likely to boost demand for the metal, which is used in electronics and solar panels.
Note that CHF rallied despite the risk-on sentiment, which made JPY the biggest loser among the major currencies. In fact USD/CHF was the biggest loser and CHF/JPY the biggest gainer among the currency pairs that I follow (see graph at the end). This is probably due to fears that the US will label Switzerland a “currency manipulator,” as I mentioned earlier.

Things to watch today: As mentioned above, after the US ordered China to close its consulate in Houston, China threatened to retaliate by closing the US consulate in Wuhan. Hu Xijin, the editor of China’s Global Times and often a surrogate for the Chinese government, tweeted: “The US has made some preparations for withdrawal from Consulate General in Wuhan. Washington must hope that China will retaliate by closing this consulate, which is a small price for the US. I think China’s target will be more likely unexpected, causing the US to feel real pain.” This is a very threatening statement. If China does limit its retaliation to closing the Wuhan consulate, the market will probably take it in stride, but if China instead decides to do something that escalates the tensions between the two countries, we could quickly switch to a “risk-off” mood.

There are several new high-frequency data series available for the US and elsewhere. Two that came out yesterday, plus one that I decided to check as well, all tell the same story: the US economic recovery has stalled and is starting to reverse.

The US Census Bureau has started putting together a new weekly survey of employment and unemployment, together with a raft of other data. It’s called the Household Pulse Survey It comes out every Wednesday afternoon US time. The latest week is sobering: it shows employment down 3.1% and unemployment up 3.3%. In numbers, that’s 4.1mn fewer people who reported having a job and 3.8mn who reported being unemployed. In one week. Not good at all, particularly as this covers the week when the July nonfarm payroll survey was being done. 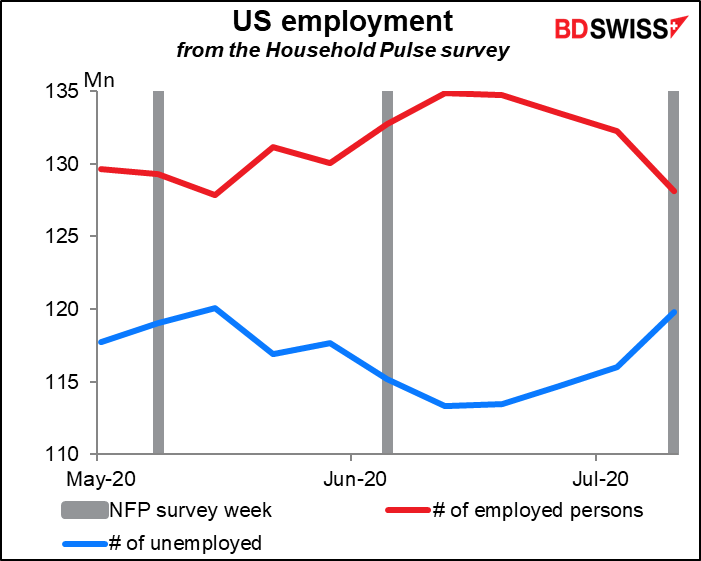 The Census Bureau data corroborates the view from the Homebase data on small business activity in the US. This shows that the nuimber of small business open has peaked and is starting to decline, as is the number of hourly employees working at them.

The Dallas Fed’s Mobility and Engagement Index, which also comes out on Wednesday, measures how much people are moving around compared to before the virus hit. It summarizes the information in seven different variables based on geolocation data collected from a large sample of mobile devices to gain insight into the economic impact of the pandemic. What it shows is: the revival has stalled. People are not moving around now any more than they were a month ago. 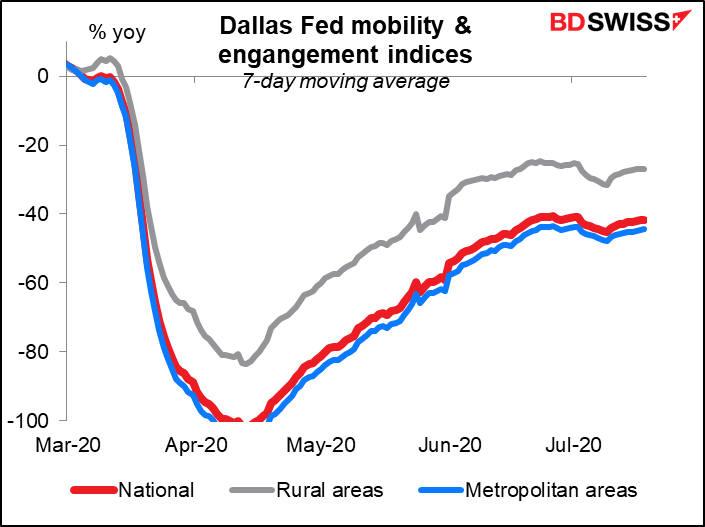 The feature today will be the US jobless claims, both initial and continuing. These figures are particularly important as they cover the survey week for the July nonfarm payrolls. In recognition of the deteriorating labor picture, they’re expected to show no change in jobless claims from the previous week. Given the rise in unemployment in the Census Bureau’s Household Pulse Survey shown above, I think that’s maybe even a bit optimistic. Even so, no change would be a big blow. After 17 consecutive weeks of over a million people a week losing their jobs, the idea that claims are no longer declining is simply abysmal. FYI the estimate for today’s figure would bring the cumulative total to 52.9mn people who’ve lost their jobs due to the virus. 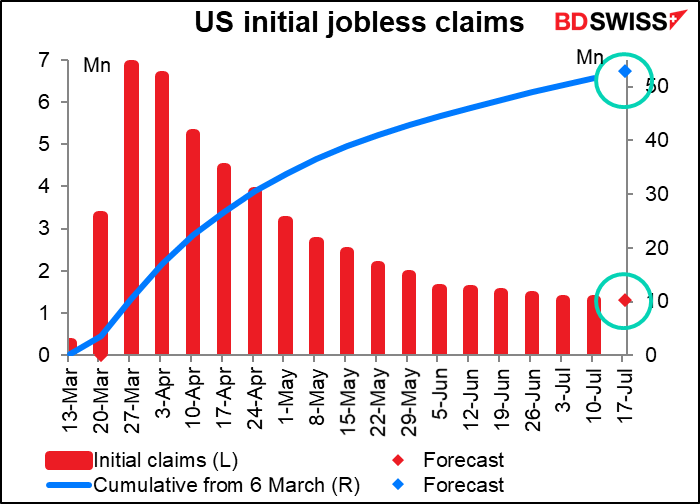 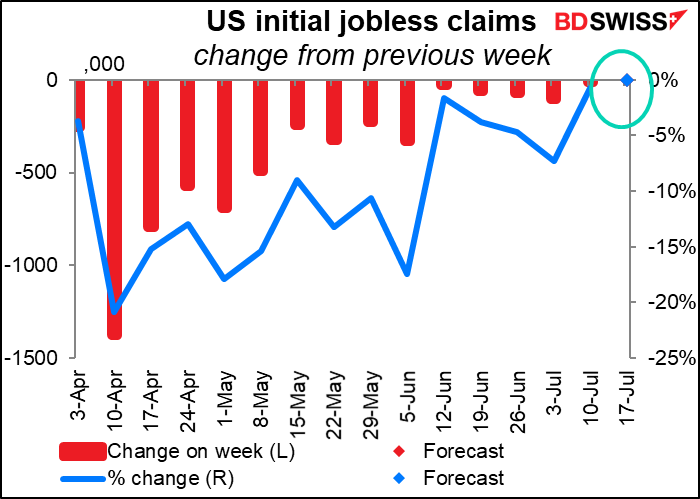 Continuing claims are forecast to be similarly dismal. At least the market’s not looking for an increase. Nonetheless, the 248k week-to-week decrease would be the smallest since the series began decreasing. It’s only about one-third of the -738k a week average for the previous four weeks. 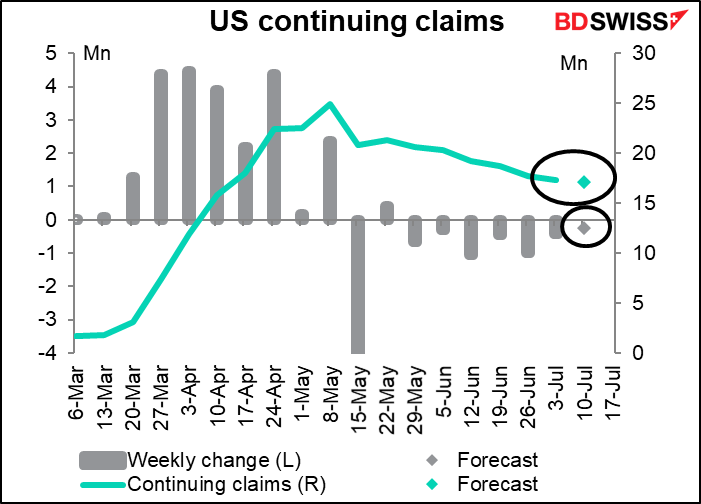 The US leading index may be yet another of those indicators that’s so many standard deviations away from its usual range that it doesn’t say anything worthwhile. Before this, the indicator – which started in 1960 – had a range of -3.4 to +1.8. Now? It went down to -7.5 in March and last month was at 2.8. This month it’s expected to be 2.1. I suppose that’s good, but I think this is one of those times when we fall back on the old saying that “past performance is no guarantee of future performance.” 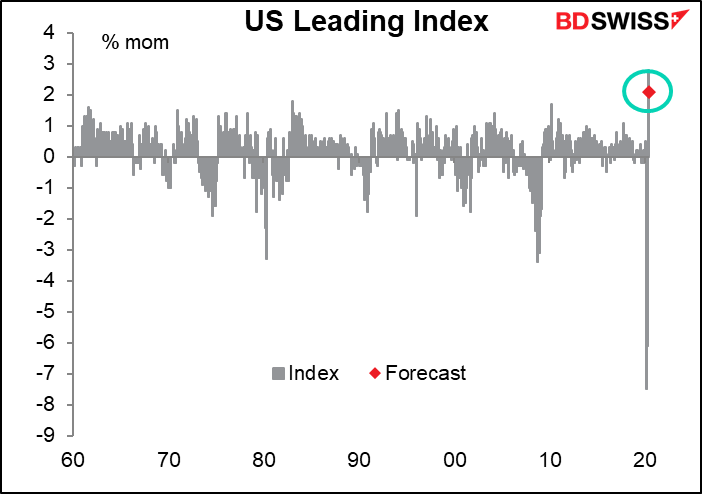 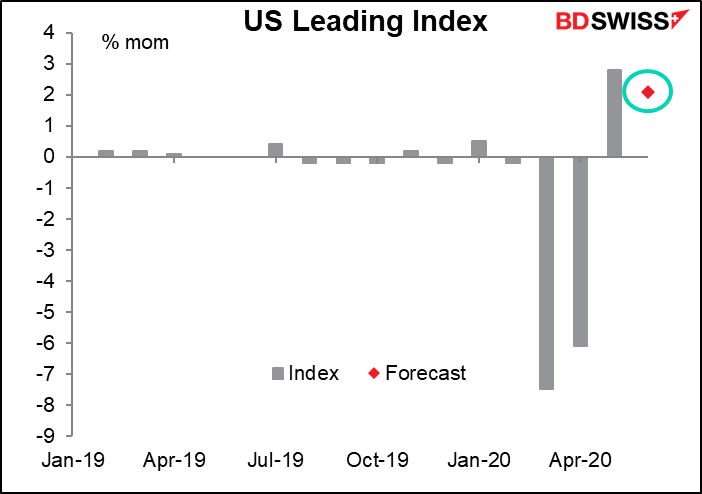 EU consumer confidence is expected to rebound to a decent level, not quite where it was before the pandemic hit, but to levels that were seen previously during times when the world wasn’t collapsing. 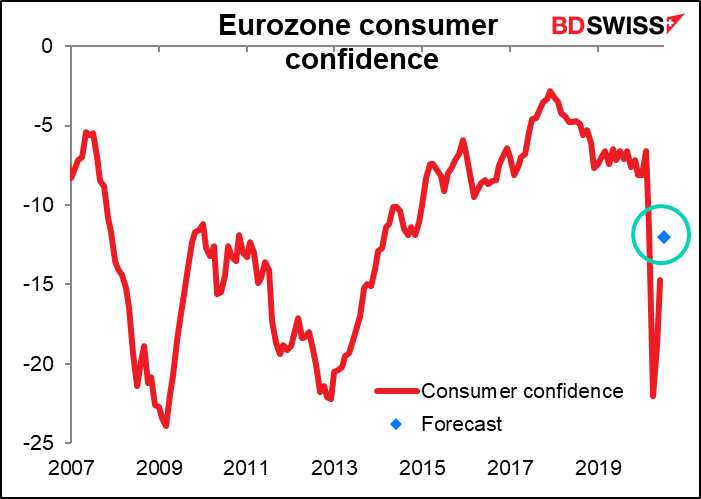 The figure by the way is a diffusion index, that is, they take the percentage of people who say things are “good” and subtract the percentage who say they are “bad” (more or less). The headline figure is the average of the answers to questions on households’ financial and general economic situation, assessment or fear of unemployment (which enters the average with inverted sign) and savings intentions, all over the next twelve months. What I find interesting about it is that since the survey began in 1985, it’s never been positive. The highest it’s been is -1.5 in May 2000. (The initial figure was positive twice, but both times it was revised to a negative number) Europeans are apparently a worried bunch.

Overnight, New Zealand announces its trade balance for June. The surplus is expected to be down sharply 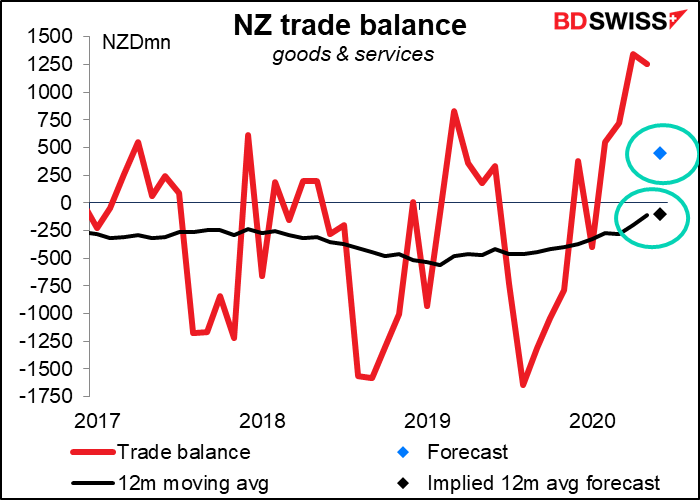 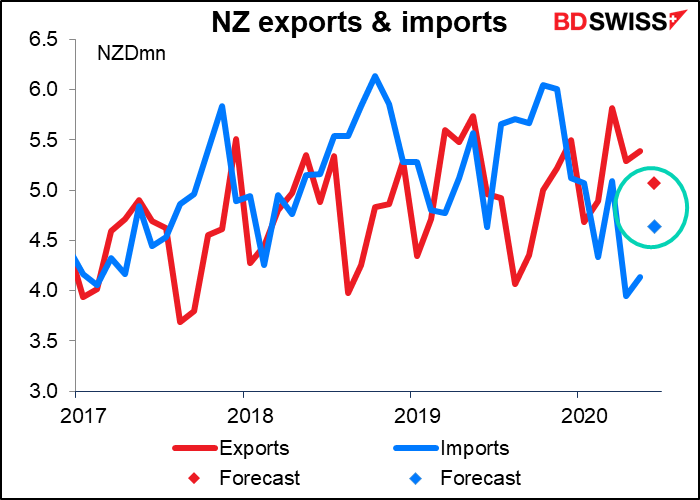 Australia will report preliminary merchandise trade figures, but they’re not in a user-friendly form (eg, not seasonally adjusted). The country’s purchasing managers’ indices will also be released, but nobody cares.

Then early Friday morning, Britain announces its retail sales. They’re expected to be up notably, but still below March’s level. That’s only to be expected as Britain was still under lockdown in June. 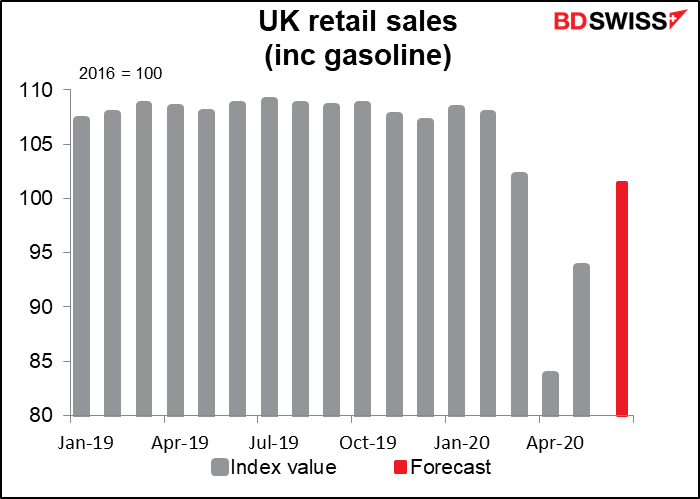 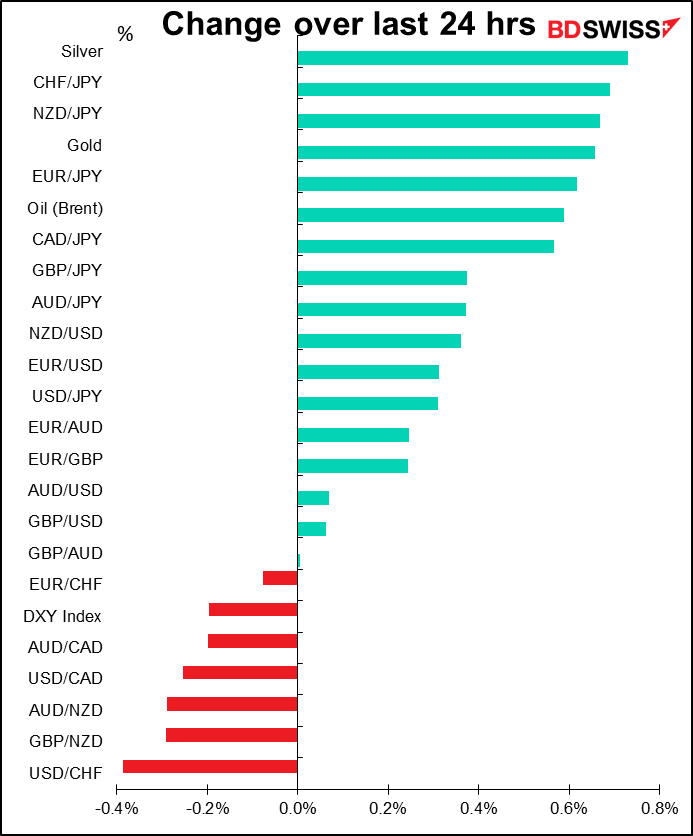