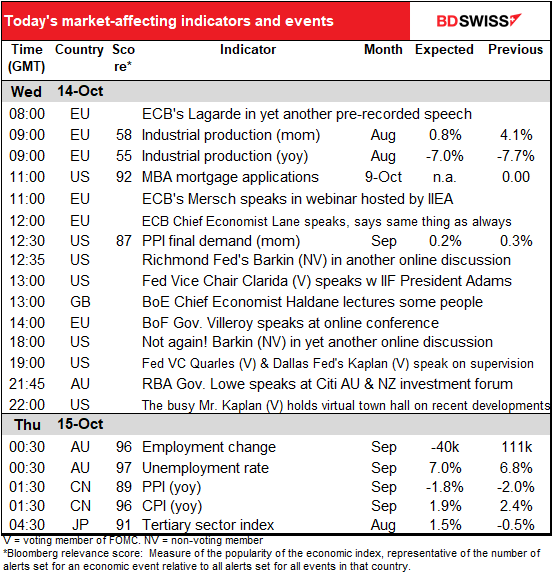 Generally a “risk-off” day as the fading prospects for any new US stimulus measures, a pair of coronavirus trial delays, and further Brexit uncertainty weighed on sentiment.

The big theme in the market was the continued decline in bond yields around the world. Peripheral bond yields in Europe hit record lows. Greek 10-year yields (not shown), which at one point were 124%, are now down to 0.79%. 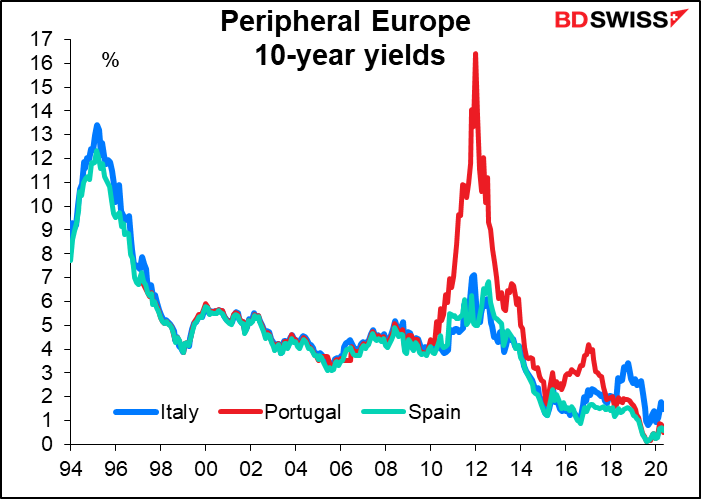 This was the lowest rate on Italian bonds since 1310 (at least!) 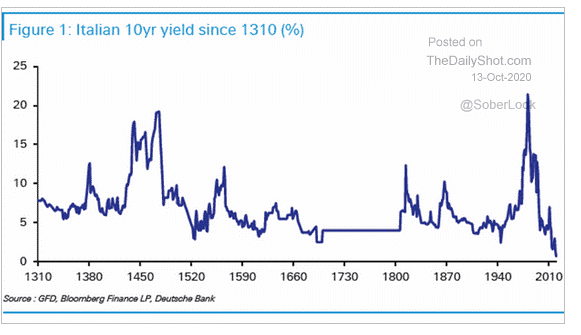 In the US, declining yields at the same time as inflation remains unchanged (or a bit higher at the headline level – see below) means declining real interest rates. This should in theory be positive for precious metal prices, but it wasn’t. That may be significant – perhaps the rally there is running out of steam.

The strong performance of NZD is a mystery to me. On the contrary, Reserve Bank of New Zealand (RBNZ) Assistant Gov. Hawkesby made a presentation in which he said that all economic scenarios include very weak inflation pressures and that the economy “is going to require continued policy support.” He also said negative rates is “not a game of bluff.” I can only surmise that people are more negative on AUD and were therefore selling AUD/NZD, which pushed NZD up against USD and JPY as well.

GBP was the big loser of the day as the Brexit negotiations made little progress. European Commission Vice President Maros Sefcovic said there will be another EU-UK meeting next week, even after the UK’s self-imposed deadline of 15 October (tomorrow), but sterling got hit on a report that UK PM Johnson told the Cabinet that the UK was “ready and willing to move forward with an Australian style outcome,” i.e. one without a formal trade agreement. There was also a Bloomberg report that EU leaders meeting this week will discuss preparations for the potential collapse of trade talks and a “no-deal” Brexit after France dug in, questioning whether it could hold perfidious Albion (or more precisely, perfidious Johnson) to any agreement. The FT reported that Johnson will talk with European Commission president Ursula von der Leyen today.

I have no friends in the UK Cabinet so I have no inside information on what they’re really thinking or planning. I’ve expected a “no-deal” Brexit for some time, but the history of  PM Boris “The Big Umbrella” Johnson is that he folds at the last minute, so a compromise that would send GBP shooting up is still possible.

Meanwhile, Bank of England Gov. Bailey revised down the Banks’ growth expectations for Q3 to around 9%-10% below last year’s level from 7% below. That makes further loosening by the BoE more likely and is also GBP-negative, although for the time being GBP will be dominated by Brexit headlines.

A bit of background for JPY:  It doesn’t seem to have influenced JPY today, but the new Suga government yesterday appointed six Special Advisors to the Cabinet. The key appointments for FX are Kaetsu University Professor Yoichi Takahashi as special advisor in charge of economy and fiscal policy and Daiwa Institute of Research head of research Mitsumaru Kumagai in charge of economics and finance. The special advisors played important roles in setting policy during the Abe administration, so these are important economic appointments.

Takahashi is known to be rather dovish with regards to fiscal and monetary policy – he supports continuing with the expansionary fiscal policy (tax cuts) and monetary easing, and believes there’s still room to expand Japan’s fiscal deficit when inflation is so low. He’s been in the government before; he played a role in government reforms and privatization, including the privatization of postal services, during PM Koizumi’s administration. His appointment may have a positive impact not only on macro policy but also on the administrative reforms pursued by Prime Minister Suga’s administration. He’s therefore probably negative for the yen in that he would recommend a loose monetary policy and his reforms could benefit the stock market, fostering a “risk-on” mood that would also be yen-negative.

On the other hand, Kumagai, who will be advising on the economy and finance, has a rather different view. He’s written a couple of books in favor of fiscal discipline, such as “The Consumption Tax Will Save Japan” (2012). Although he’s not an advisor on fiscal policy, still, the appointment of two people with diametrically opposite views clouds the administration’s macro policy stance somewhat.

It does seem to me that more people are speaking at more conferences now that they can do it from their offices. We’re also seeing more instances of people appearing twice on the same day – both Richmond Fed President Barkin and Dallas Fed President Kaplan are appearing in two different events today. Meanwhile. ECB President Lagarde has fallen into the habit of pre-recording comments to play at various meetings – she’s doing that today, she did it Monday with an IMF conference, and she did it last week for a Wall Street Journal conference.  Net net, I’ve got a long list of “market-affecting indicators and events” that’s heavy on events and light on indicators.

The notorious EU industrial production gets a low relevance score but is closely watched to see how the economic cycle is developing. Answer: not so great! The rate of increase in production has slowed every month since the rebound began in May, and this month it’s expected to be up only a tiny bit from the previous month. This sign of stagnation may be negative for the euro, as it makes a further reduction in European Central Bank rates more likely. 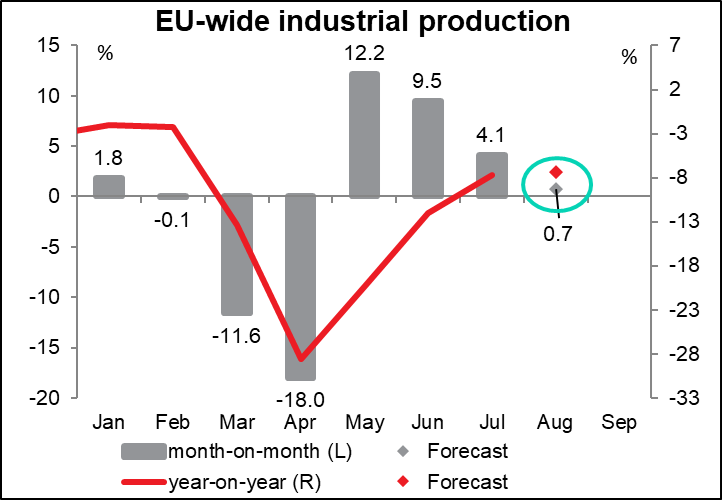 That contradicts the message from the EU-wide manufacturing purchasing managers index (PMI), which has long since recovered into expansionary territory. So where’s the expansion? 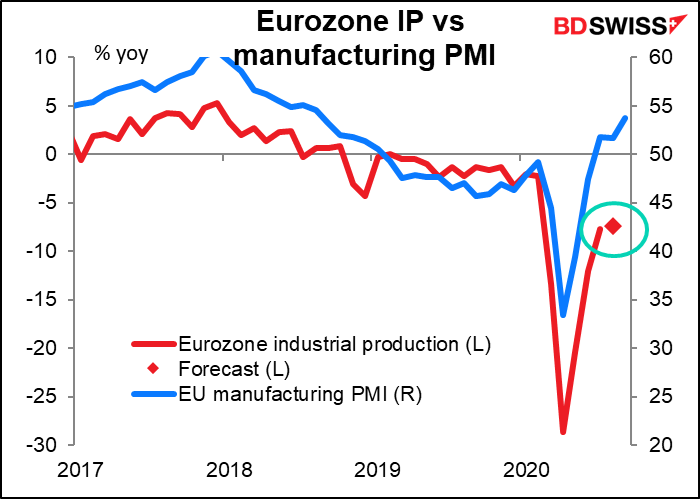 If today’s forecast is correct, output will still be 6.6% below the pre-pandemic level. 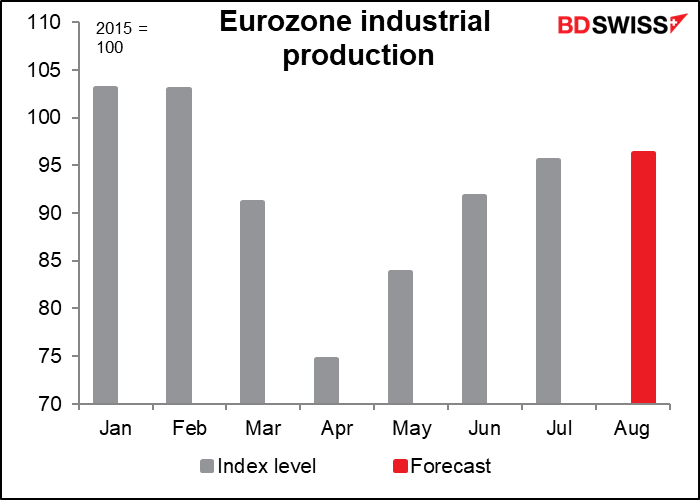 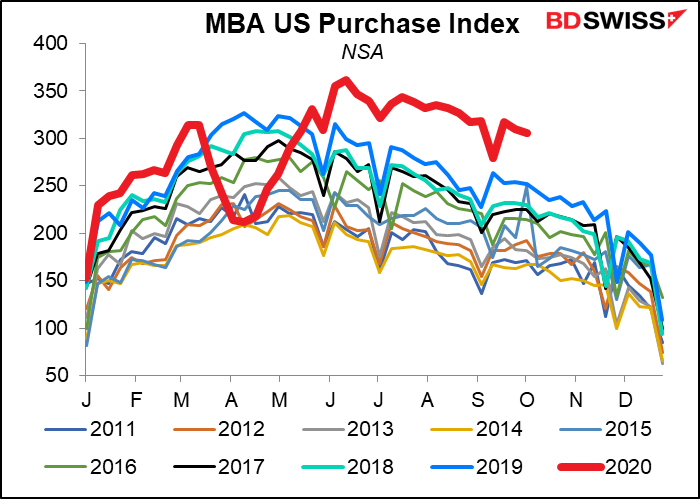 Does anyone in FX care about the US producer prices? It’s got a pretty high Bloomberg relevance score, but that may be thanks to equity investors, for whom it’s an important indicator of pricing power among companies and a possible indicator of profit margins. Note that both mom and yoy are forecast to be +0.2% and so the dots overlap. The PPI shows little upstream pressure on prices, which goes along with yesterday’s consumer price index — prices rose only a small +0.2% from the previous month. 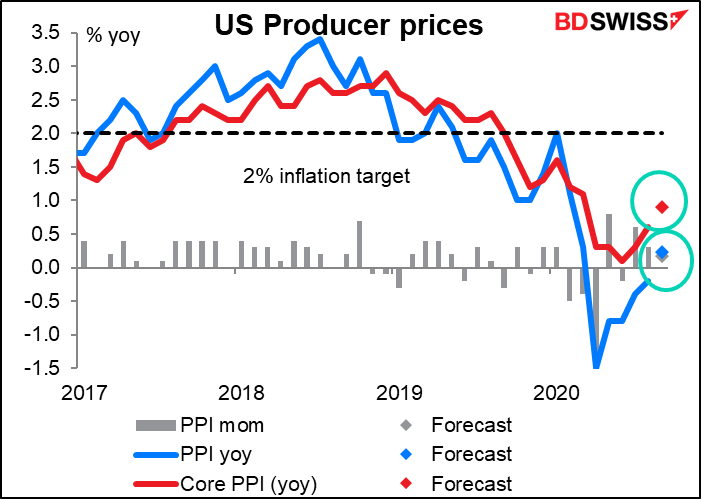 Then I can head off to the beach for some of the season’s last bit of swimming (it’s still warm enough in Cyprus – eat your heart out, all you folks shivering in the UK!) because there are no other indicators until overnight, when Australia releases its employment data. The market is looking for a decline in employment after the unexpected rise in August. (The consensus forecast was for a 35k decline vs the 111k rise; is it just an accident that the consensus forecast this month is 35k again?) The unexpected rise last month was driven by “gig-economy” jobs, as the entire rise was in “non-employees,” most likely delivery drivers working for the major online delivery companies. This is yet another example of how the pandemic is changing the structure of economies.

In any case, I would think a fall in employment and rise in the unemployment rate would be negative for AUD, although it may be already discounted as last month’s rise was so unexpected. 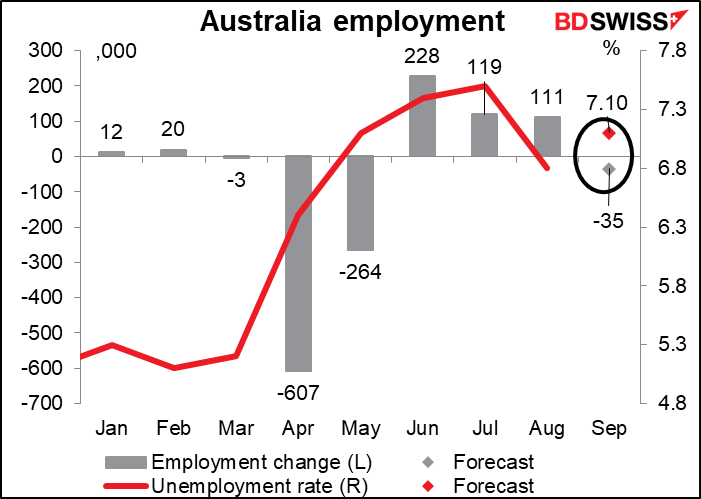 As for China inflation data, the market expects a continuation of the recent convergence trend:  slowing inflation at the retail level and slowing deflation at the producer level. Slowing PPI deflation is a tailwind for central banks around the world as China’s PPI has a big influence on their import prices. But I’m not sure what (if any) currency this indicator impacts directly. 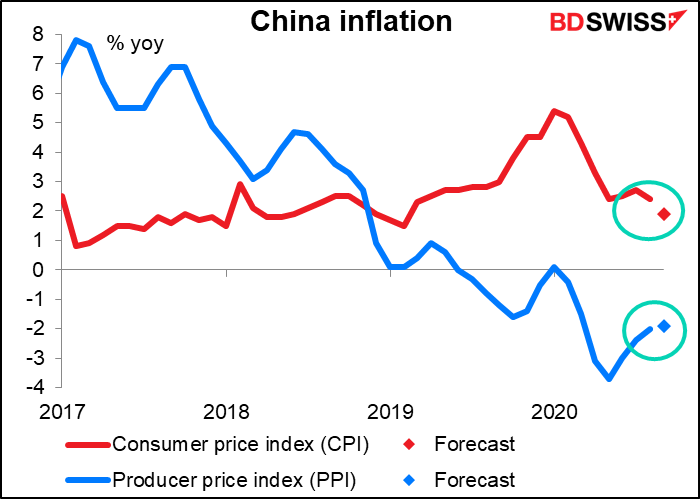 Japan’s tertiary sector index, a guide to the service sector, is expected to make a small rebound in August after the even smaller fall in July. Not much action in the tertiary sector nowadays!

If this affects the FX market – and I’m not sure it will – it would probably depress sentiment for stocks, which would be positive for the yen. 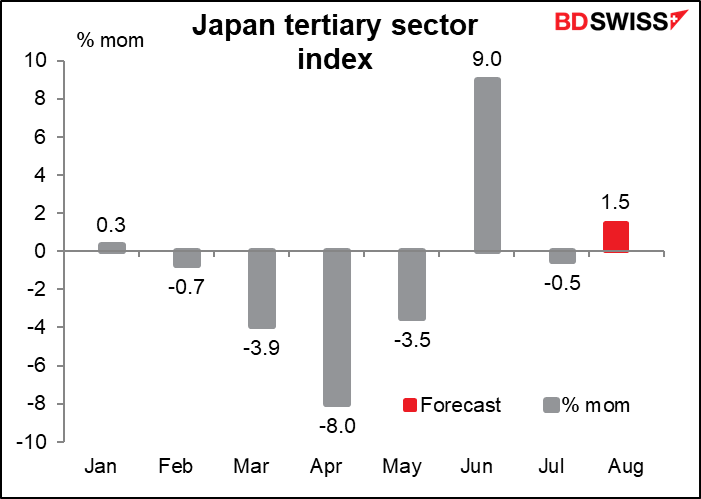 The index seems stuck at around 6% below the pre-pandemic level. 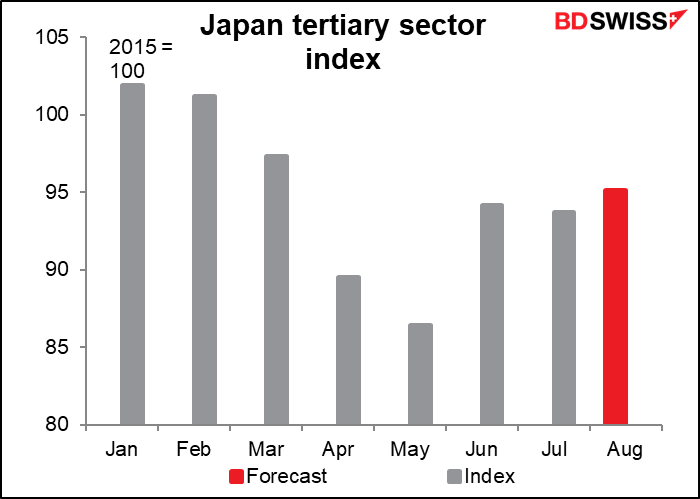 The tertiary sector index seems to be underperforming even the notoriously underperforming Japan service sector purchasing managers’ index, which among the developed countries is second only to virus-ravaged Spain at the bottom of the league tables. 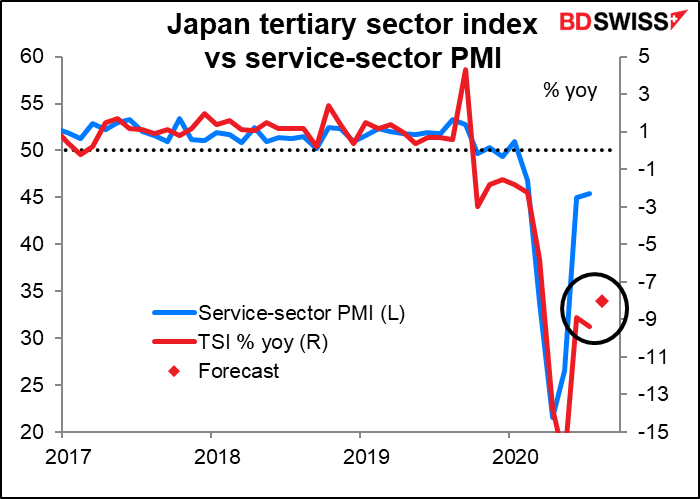 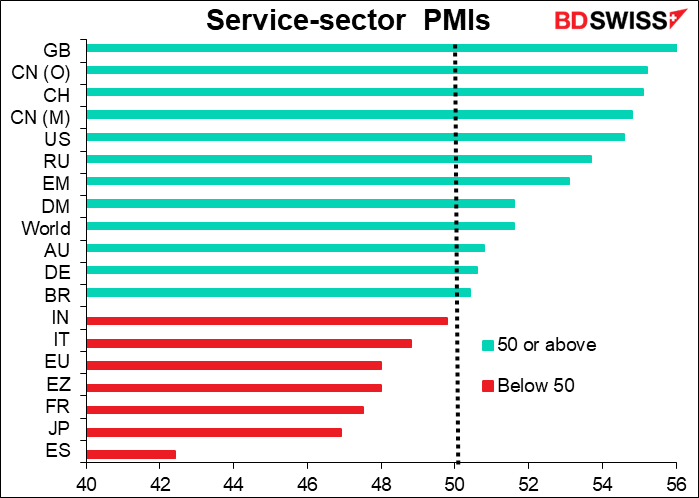 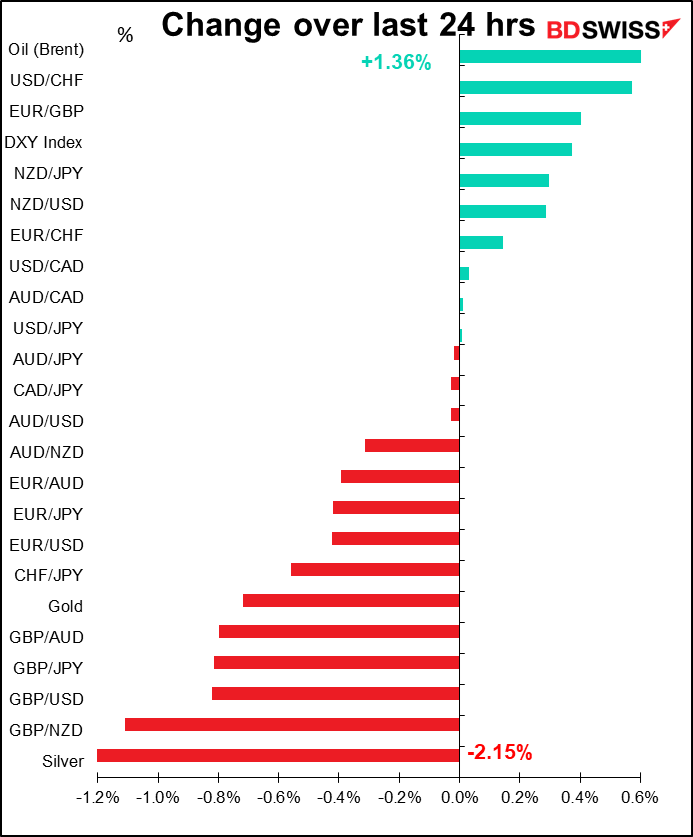