You are at:Home»MARKET PREVIEW»AUD Plunges on talk of Chinese Import Restrictions; ZEW Survey, US CPI 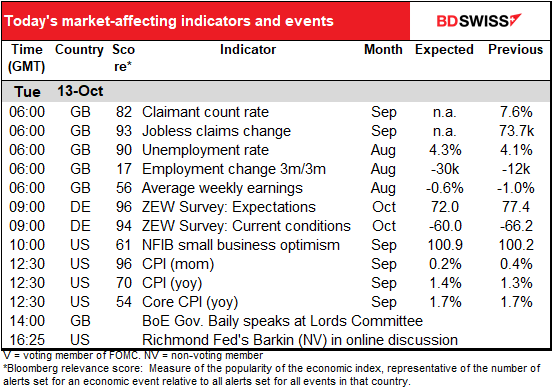 Note:  The table above is updated before publication with the latest consensus forecasts. However, the text & charts are prepared ahead of time. Therefore there can be discrepancies between the forecasts given in the table and in the text & charts.

Odd day in the market – most currencies’ trade-weighted indices are ±0.2% of their levels yesterday morning, with one glaring exception: AUD. AUD was clobbered around 00:00 GMT when China reportedly suspended purchases of Australian coal. There’s no official confirmation, but the reports say the Chinese government told its ports to stop offloading Australian coal and instructed power stations and steel mills to stop using Australian-sourced fuel. This is despite long-term contracts that are in place.

By itself, this isn’t a real killer for Australia. China is a major market for the country’s coal but not the only one (as far as I know). 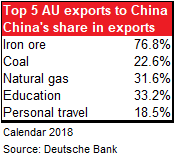 And there’s no particular correlation nowadays between coal prices and AUD/USD. 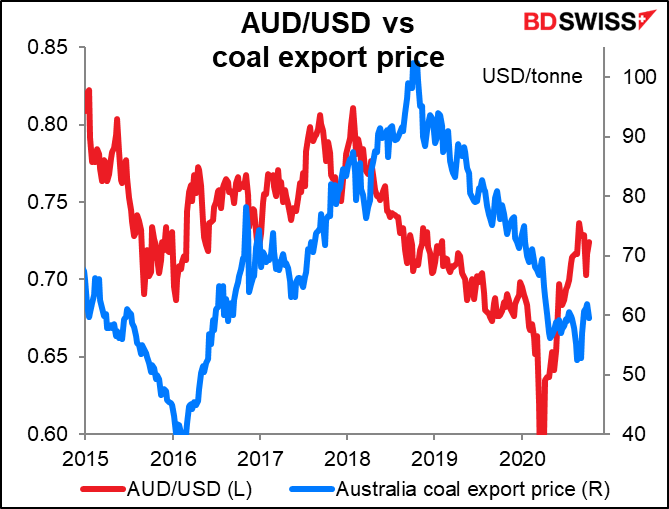 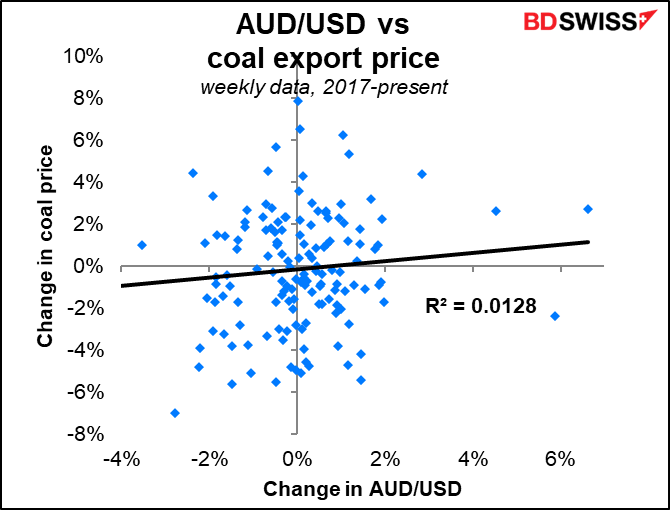 However, as a sign of heightened tensions between the two countries and as the possible start of things to come, it’s a bad sign. Australia is the (major) country most dependent on exports to China, as far as I know. 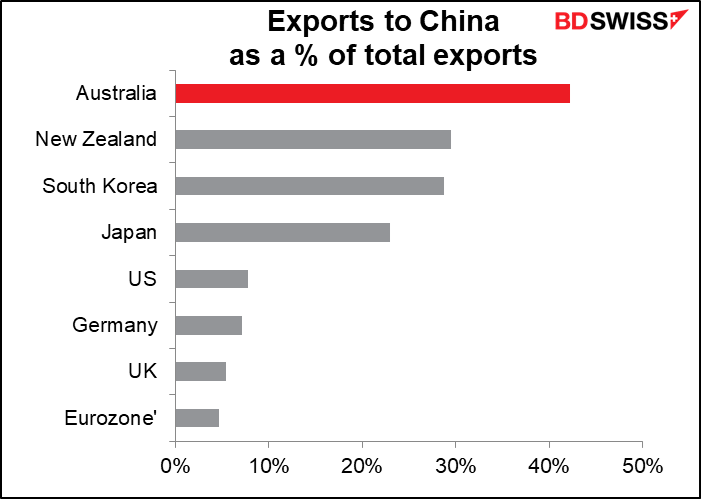 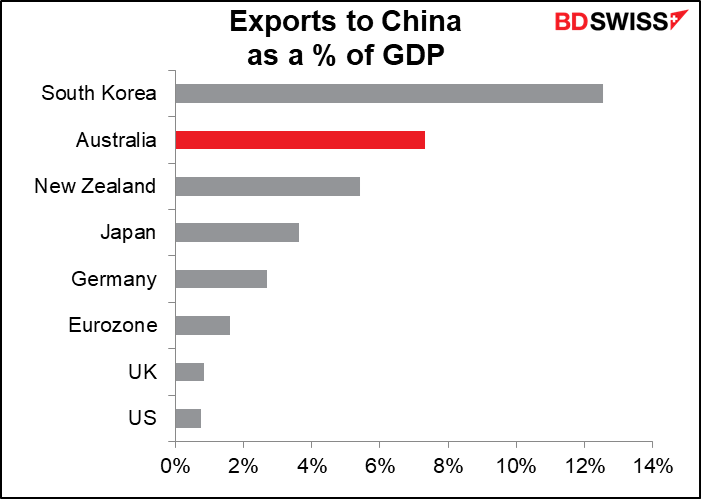 It’s really unfortunate, because the September figures just released overnight showed a huge jump in imports in China (+13.2% yoy vs +0.4% yoy expected) to a record level. It would be great for Australia if it could continue to take a large share of that growing pie. 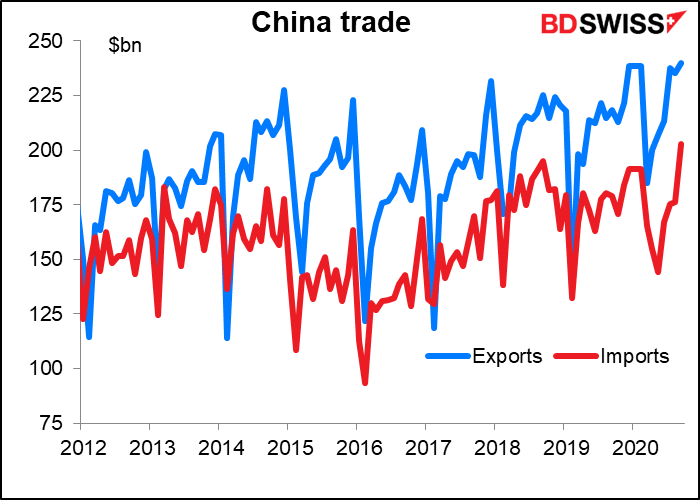 Given the Reserve Bank of Australia’s musings about negative interest rates and the welcome spillovers from monetary policy into foreign exchange as well, the fundamental background seems stacked against AUD right now.

Elsewhere, the FX market had a relatively calm day, in contrast to the US stock market. Even with the US Columbus Day holiday, the S&P 500 managed to close up +1.64%, its second-highest level ever, just a bit more than 1% below its record close. The index’s biggest component, Apple (+6.35%), was the best performing S&P stock in anticipation of today’s launch of the new iPhone, which I have never bought and will never buy. The big tech stocks outperformed the broader index leading the NASDAQ to finish up 2.56%. Attention will now turn to the start of the Q3 earnings season today.

European Central Bank (ECB) Vice President Luis de Guindos yesterday dropped some hints that the bank might increase its pandemic emergency purchases at its December meeting. He observed that the economic rebound has been losing some momentum in recent weeks, according to high-frequency indicators, which is true. They are tending to move sideways more than up. 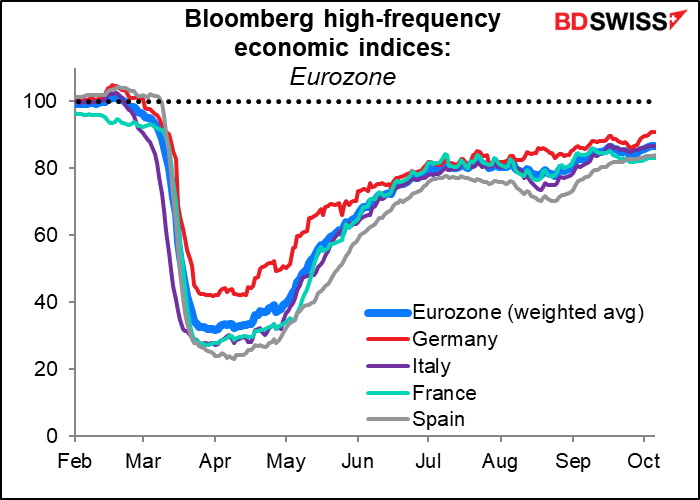 “We will have new projections in December and we will reassess how convenient and how adequate the package is according to the new projections,” he said. Since it’s likely the projections will be revised down, that would probably warrant further action on the part of the ECB. This further loosening of ECB policy would, in theory at least, be likely to weaken the euro – which is probably one reason why they’re likely to do it.

GBP gained on news that the new lockdown measures in Britain are less restrictive than was feared. Shops and schools will stay open in all areas regardless of the alert level. Of course if these measures don’t do the trick then they may have to implement stricter ones, perhas even stricter than what they would need to do if they did it now. But that’s tomorrow’s problem, not today’s. 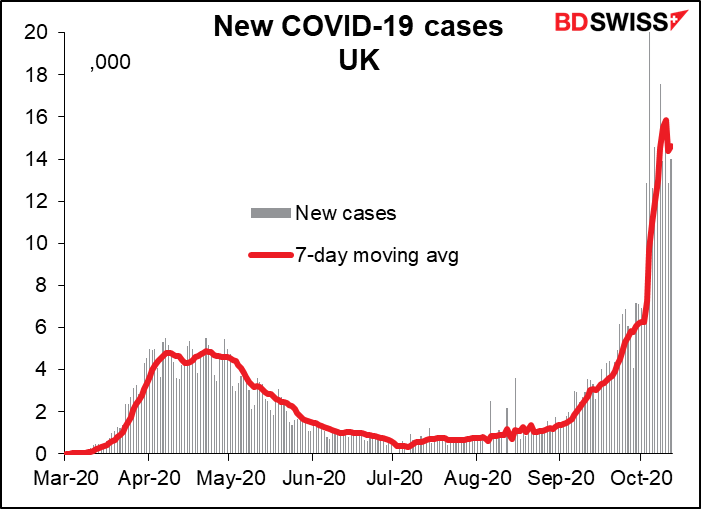 We’ve already gotten the UK employment data out. It was mixed; the unemployment rate remained unchanged even though more jobs were lost than expected, which implies that a large number of people dropped out of the labor force.

Next up is the dreaded ZEW survey. This is a survey of economists, commentators and other useless parasites on society (like me) not hard-working people who actually do something and make something, like purchasing managers. So it’s more of a sentiment indicator than an indicator of economic activity. The story it’s expected to tell this month: the current situation continues to improve (slightly) but expectations are falling. 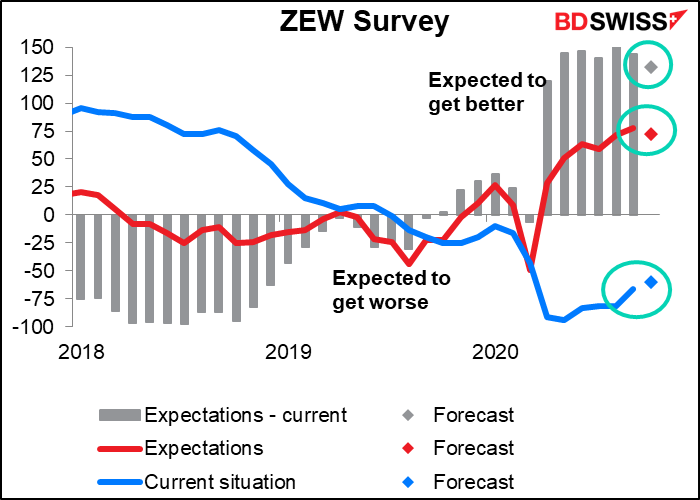 My guess is that the future is clouded by the recrudescence (the word of the month!) of the virus in Germany (and elsewhere in Europe, too). 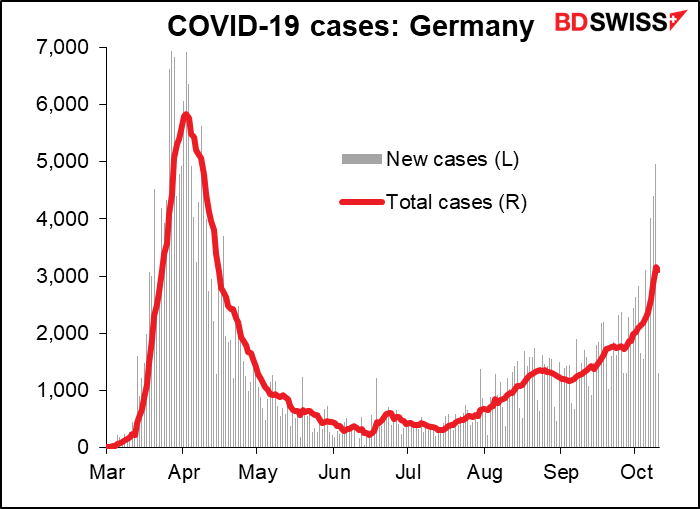 The National Federation of Independent Businesses (NFIB) optimism survey has a fairly low Bloomberg relevance score, but I seem to remember seeing it quoted as a factor in the market, so I follow it. The hiring plan index, which is released a few days earlier, has bounced back further than the overall index, which could be significant, except we don’t see such a big surge in hiring in the other data. The overall index is low relative to where it’s been recently but at a level that was normal before 42% of the US electorate was apparently kidnapped by aliens and turned over to the Dark Side. 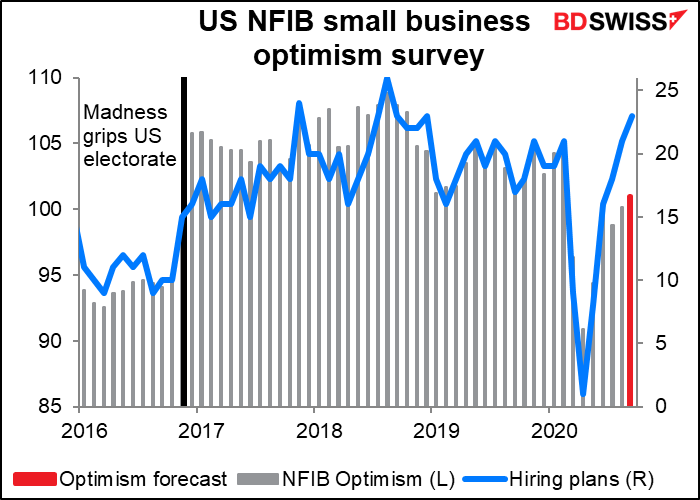 I only have the Homebase data with a one-month lag, so till 8 Sep, but that certainly wasn’t giving any reason to expect an increase in hiring or indeed in optimism among small businesses. On the contrary, it showed that the number of local businesses open and the number of hourly employees working was falling in early September. Perhaps as school got underway some businesses saw a pickup later in the month. 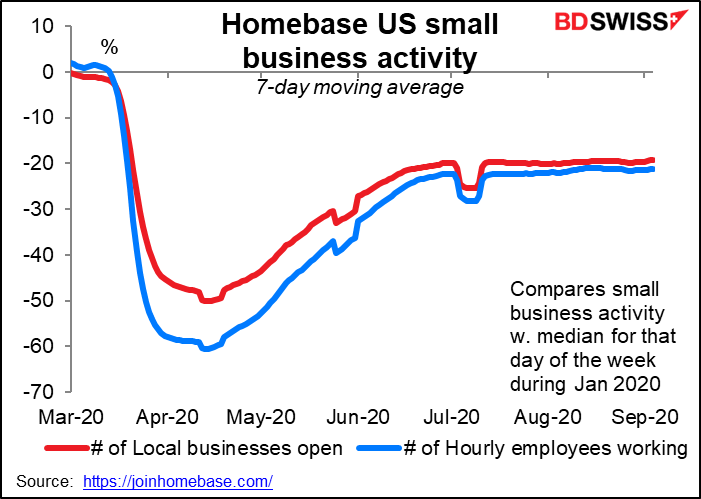 Finally we have the key statistic for the day – the US consumer price index (CPI). This used to be one of the major statistics every month, but as the new Fed Statement on Longer-Run Goals and Monetary Policy Strategy made clear, the Fed is now committed “to achieve inflation moderately above 2 percent for some time.” Higher inflation is therefore pretty far down on the list of the Fed’s concerns. On the contrary, it’s more concerned about a possible slowing in inflation.

Fortunately for them, the headline figure is expected to show a small acceleration in inflation, while the core inflation rate is expected to remain the same. But it’s not clear how long that will last. 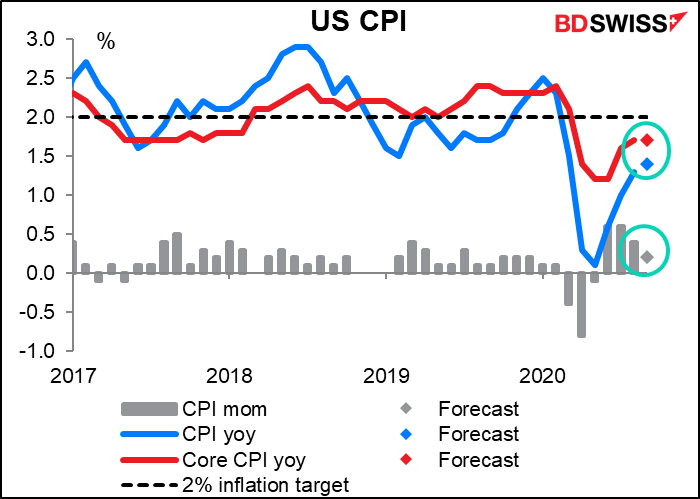 There has been some upward pressure on prices recently thanks to sudden changes in purchasing patterns caused by the virus – eg, used car & truck prices were up 5.4% last month as people are starting to go back to work and prefer to drive rather than take public transport. Also food prices – food in general costs 2.8% more than in February, before the shutdown (food made at home is 3.6% higher while food purchased away from home is 2% more – are people eating more now that they’re spending more time near their refrigerator?)

By comparison, consumer energy costs are 9.6% lower now than they were in February, which is one reason why risks to the inflation outlook remain skewed toward disinflation or deflation. As the economy adjusts to the new spending patterns, there’s a good chance the US is going to see slower inflation, which may get the Fed agitated.

Having said that, inflation expectations in the US seem better anchored than in the EU. In the US they’ve been moving steadily higher and returned above the 2% target, whereas in the EU not only are they still well below that target but they’ve started to  drift lower. This may explain one reason why the European central bank is talking so much about easing further. 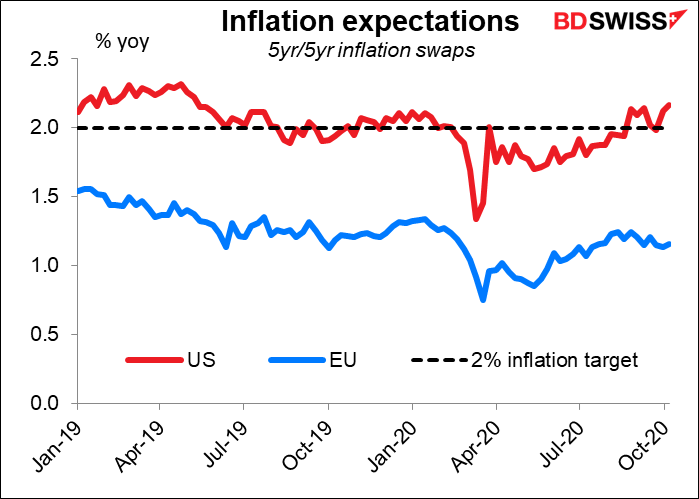 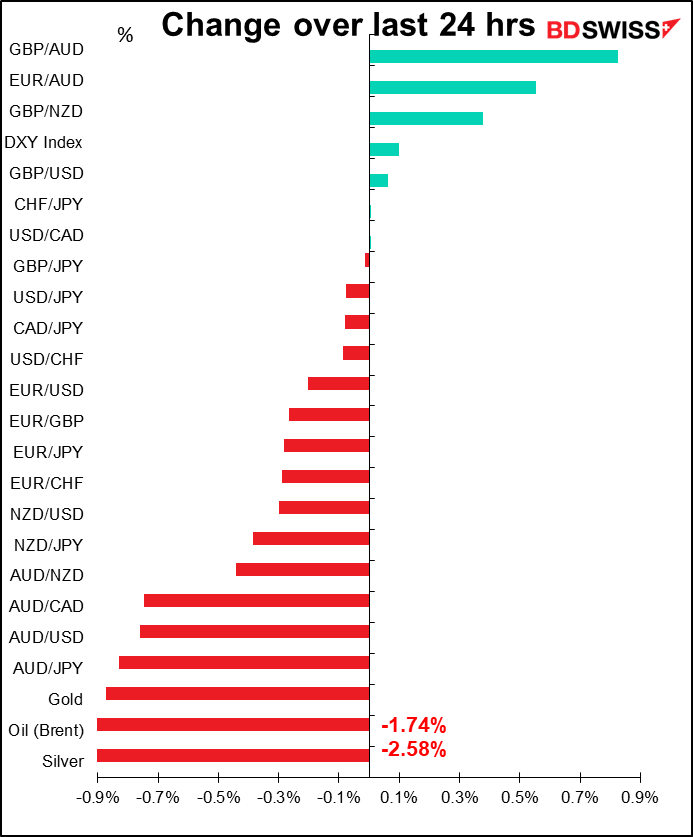