We heard similar comments from three central banks this week. If I may quote the relevant parts:

Bank of Japan: The Bank will continue with “Quantitative and Qualitative Monetary Easing (QQE) with Yield Curve Control,” aiming to achieve the price stability target of 2 percent, as long as it is necessary for maintaining that target in a stable manner. It will continue expanding the monetary base until the year-on-year rate of increase in the observed consumer price index (CPI, all items less fresh food) exceeds 2 percent and stays above the target in a stable manner.

Bank of Canada: “The Governing Council will hold the policy interest rate at the effective lower bound until economic slack is absorbed so that the 2 percent inflation target is sustainably achieved.” In addition, the QE program “will continue until the recovery is well underway.”

ECB: “We expect [policy rates]to remain at their present or lower levels until we have seen the inflation outlook robustly converge to a level sufficiently close to, but below, 2% within our projection horizon, and such convergence has been consistently reflected in underlying inflation dynamics… We continue to expect monthly net asset purchases under the Asset Purchase Program (APP) to run for as long as necessary to reinforce the accommodative impact of our policy rates, and to end shortly before we start raising the key ECB interest rates.”
In short, they will keep interest rates at zero (or below) and keep buying bonds until their economy has recovered from the virus and they’ve hit their inflation targets and then some/

Just to remind you how long it could be before inflation “exceeds 2% and stays above the target in a stable manner,” here’s a graph of Japan’s “core-core” inflation rate (excluding fresh foods & energy adjusted for increases in the consumption tax) against the background of the country’s extraordinary monetary policies, starting with the Zero Interest Rate Policy in February 1999. Twenty-one years and counting and this measure of inflation is expected to be +0.4% yoy when the data for June is announced this coming week. 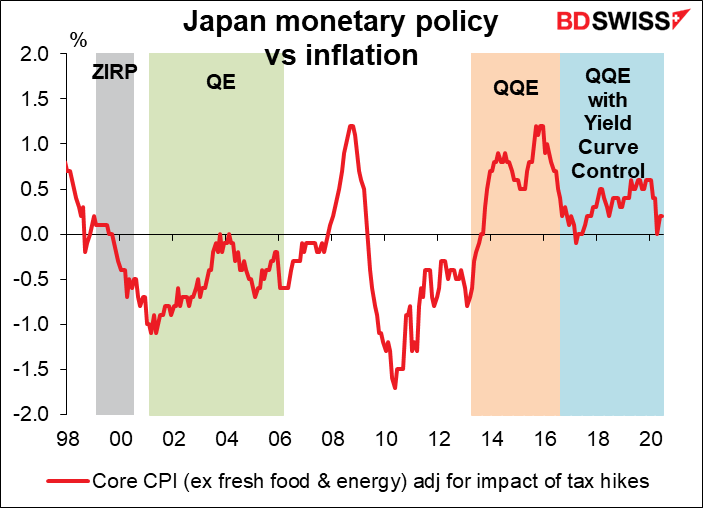 In case you don’t think this is possible outside of Japan, here are the market’s estimates for inflation in the three afore-mentioned countries over the next 10 years. It’s not even expected to average 1%, much less 2%. 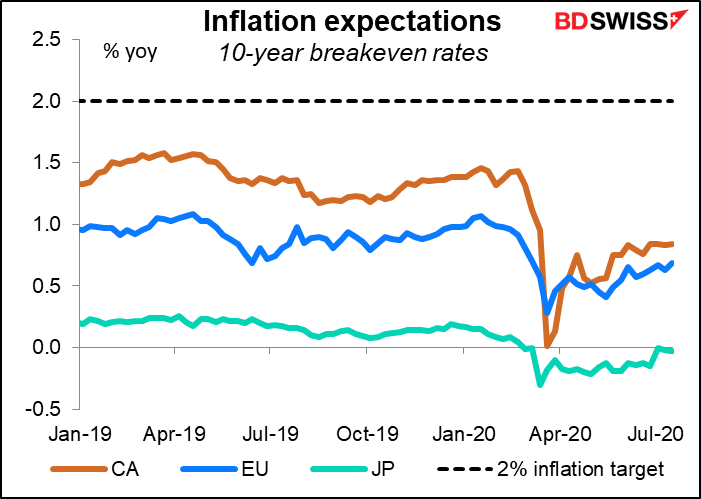 In other words, for these central banks it’s zero interest rates and quantitative easing as far as the eye can see.
In that case, what’s going to differentiate currencies?

At the moment, that means a stronger EUR, in my view.

The Bundesbank’s weekly activity index for the German economy has turned up faster and more steadily than the Fed’s equivalent measure, which has started to turn down. 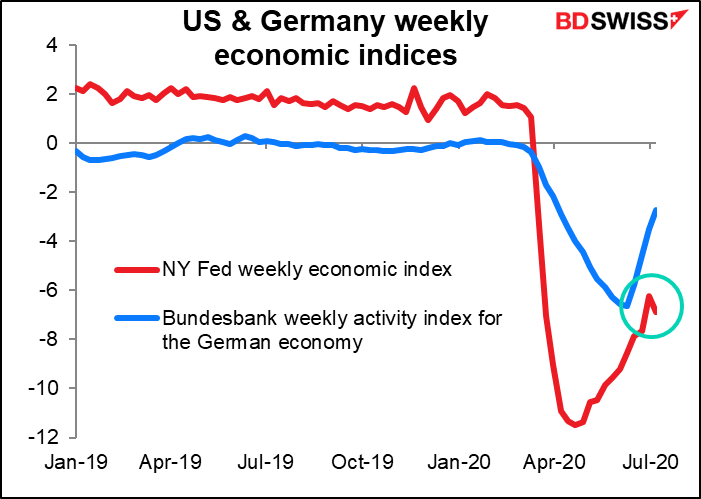 It’s the same message from Bloomberg Economics, which combines a variety of short-term indicators, such as traffic congestion, restaurant bookings and footfall in shops, into a measure of overall activity for countries. 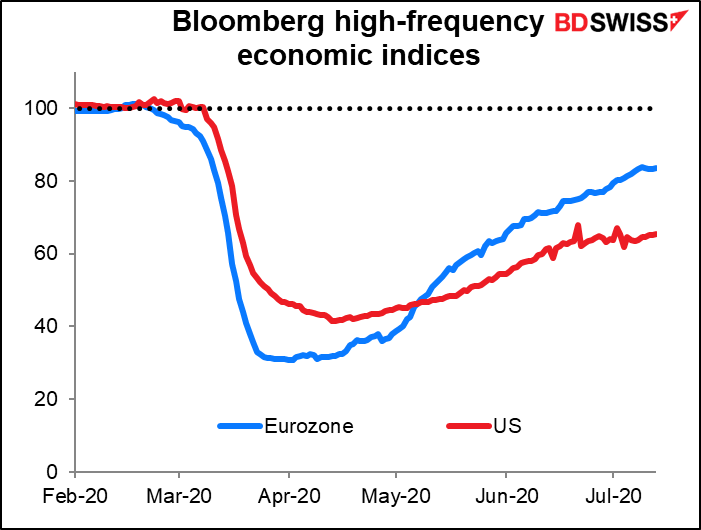 Most worrisome to me is that 17 weeks into this debacle, 1.3mn people a week are still losing their jobs in the US, according to the weekly jobless claims. And the indications from the Census Bureau’s new “Household Pulse” survey is that it’s only going to get worse: employment has started to move down again as some states shut down businesses again.

Driving all this is of course the virus. The US now has 25x as many new cases a day as Europe does – and it’s accelerating at an exponential pace. The US economy will inevitably turn down one way or another: either because the states go into lockdown again, or because the virus becomes so bad that people can no longer work. 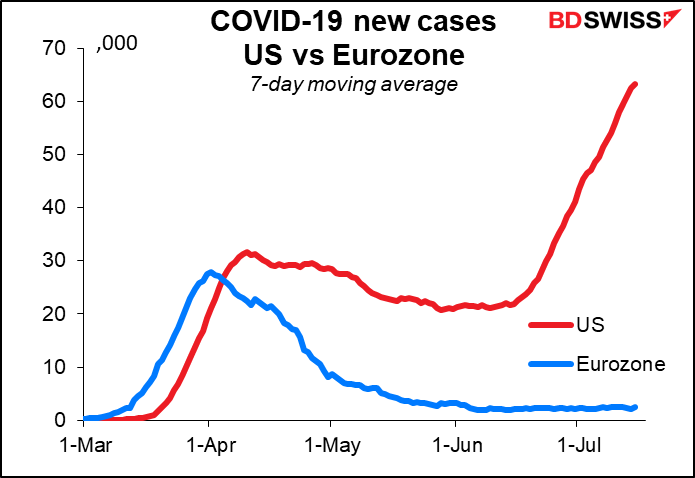 In the past, EUR/USD has tracked fairly closely the difference between expectations for growth in the two areas. The current level of EUR/USD is an outlier – the growth differential says it “should” be much higher, but USD is being supported by overseas demand for dollars and by the “safe-haven” effect. But when it becomes clear that in fact Europe is safer than the US – at least, from a medical point of view – I would expect that US’ status to slide. 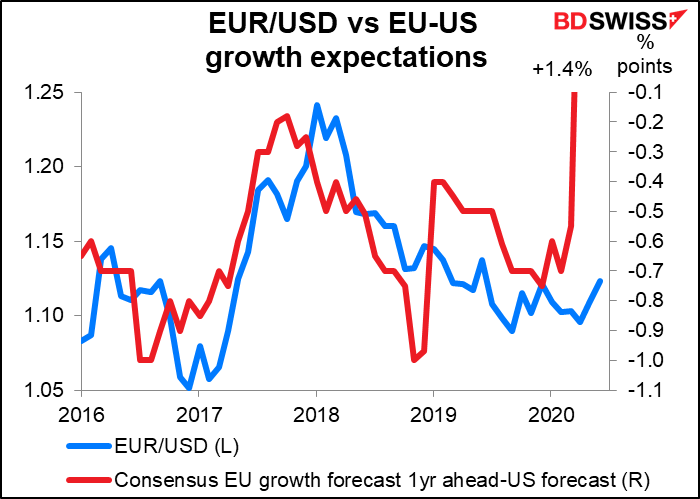 This weekend’s discussion of the “Next Generation EU” fund and the EU’s seven-year budget could cause some temporary weakness in EUR if, as I expect, they fail to come to an agreement before the summer holiday. But they’re sure to come to an agreement eventually, and the fund is potentially a gamechanger for Europe. It would support a synchronized recovery and reduce the risk of a slump among the peripheral countries of southern Europe. It would also be the necessary next step in an “ever-closer union: establishing a central fiscal capacity that can respond to adverse shocks, which would make monetary union more stable, and issuing a large-scale EUR-denominated safe asset, which would make the euro more attractive as a reserve currency.

One of the other ways in which I would expect the euro to strengthen as Europe emerges from the pandemic is through flows out of US stocks and into European stocks. US stocks have had a good run so far this year, with the S&P 500 down only about 0.5% YTD and the NASDAQ actually up 16.7%. The Eurostoxx 50 on the other hand is down 10.1%. As investors realize that Europe is likely to recover sooner and with more resilience than the US, they are likely to move money out of US stocks and into European stocks. Those flows may help EUR/USD to rally further, in my view. 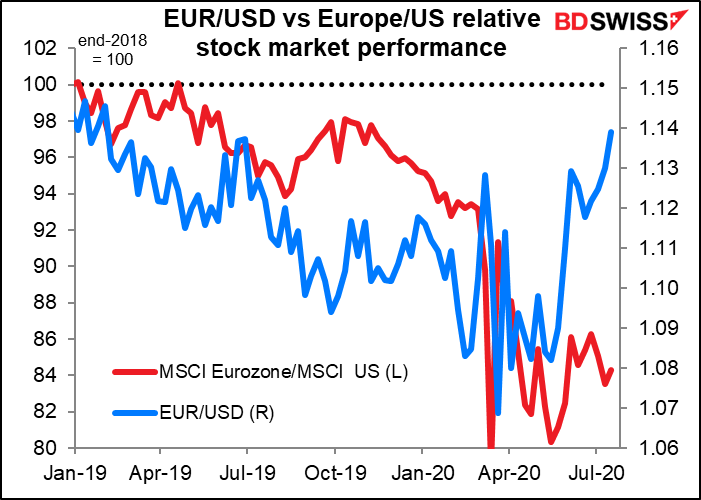 Rarely have I seen a week so void of major indicators or events. No major central bank meetings, nor even any Fed speakers as we’re now in the two weeks before the next FOMC meeting.

The indicator cupboard is similarly bare. There are no major indicators during the US and European day Monday and barely anything on Tuesday, either (Canadian retail sales is basically it). Wednesday just Canadian CPI and US existing home sales. Thursday we get the weekly jobless claims. It’s only on Friday that we get the main – indeed, the only – big market-mover: the preliminary purchasing managers’ indices for the major industrial countries. (Thursday and Friday are holidays in Japan – Marine Day and Sports Day — so Japan’s will be announced Wednesday morning Japan time.)

We don’t have forecasts for France yet, but the others are expected to move down and to the right. That means that they aren’t expected to improve as much as they did last month (only natural, as they were emerging from the depths then) but they are expected to improve further in any case. The service-sector indices in particular are expected to edge up to (Germany) or over (Eurozone, UK, US) the crucial 50 line into expansionary territory. As it was the service sector that was hit the hardest in the lockdowns, that’s good news. At least the contraction can stop. 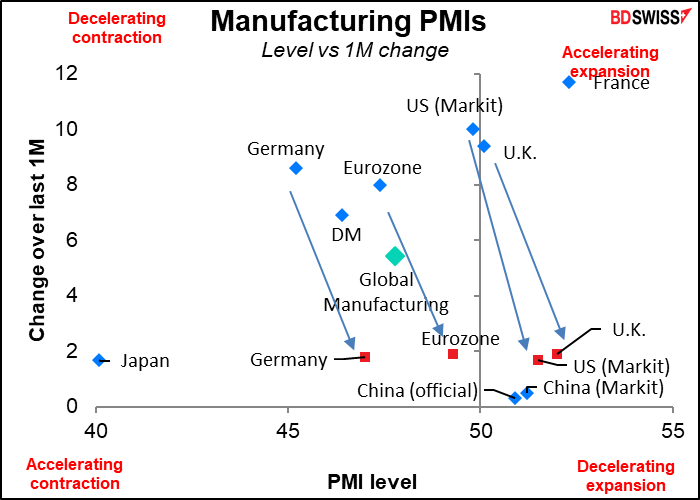 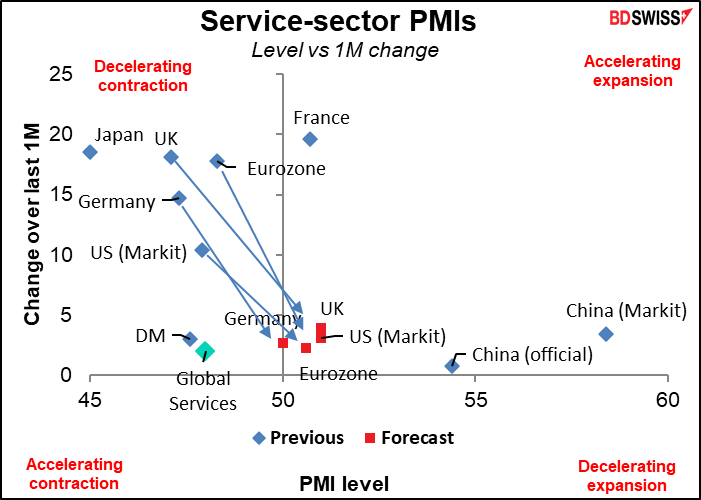 The service-sector PMIs poking their noses over the 50 line could be cause for more talk about a “V”-shaped recovery, or at least some recovery, and boost “risk-on” sentiment.

Existing (Wed) and new (Fri) home sales are expected to rebound significantly. Housing has been one of the few bright spots in the US economy as new home sales never fell that far to begin with. It’s been reported that a lot of people living in cities have recently discovered that they can work from home and subsequently decided to trade their small flat in a crowded city for a larger home in the nice green suburbs. But since the people in the ‘burbs aren’t going anywhere, the only houses they can buy are new ones. 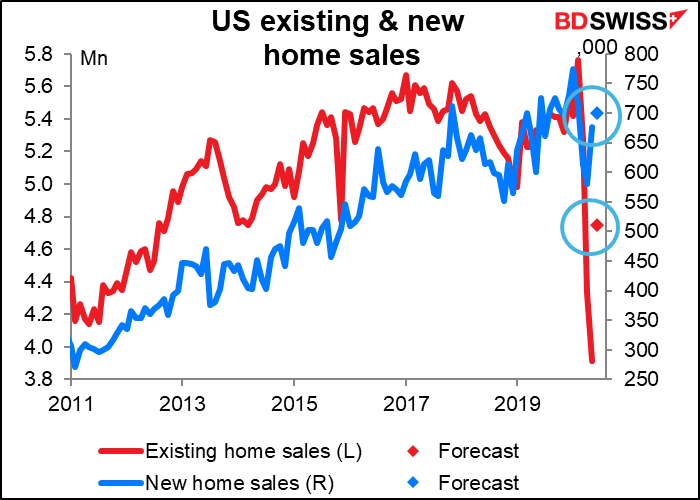 Record-low mortgage rates may also have something to do with it, although I’ve read that this exodus from the cities is not a uniquely US phenomenon. But then again, neither are record-low interest rates. 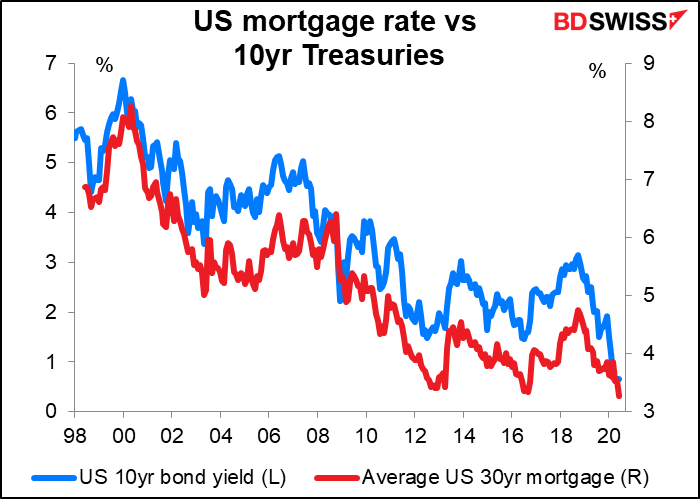 UK retail sales (Friday) are expected to bounce back to March’s level. Not as good as February, but a significant improvement from the bottom. Canadian retail sales are coming out on Tuesday; no forecast yet available. Retail sales are one of the main indicators nowadays, along with jobs, as investors want to see the wheels of the economy turning again. 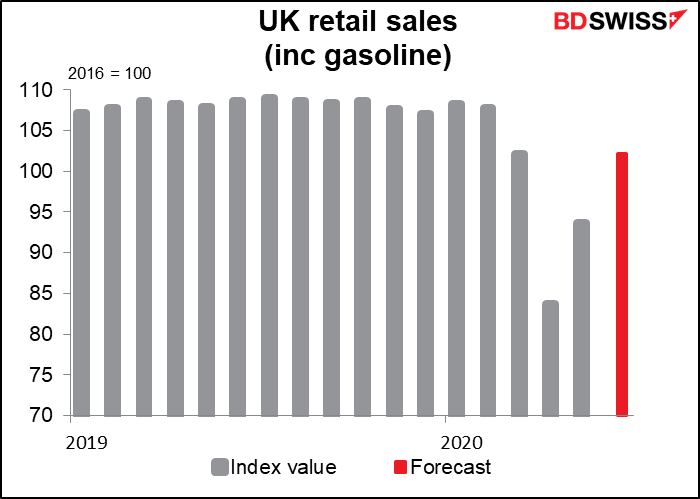 Japan’s trade balance, out Monday morning, is expected to show a narrowing deficit. 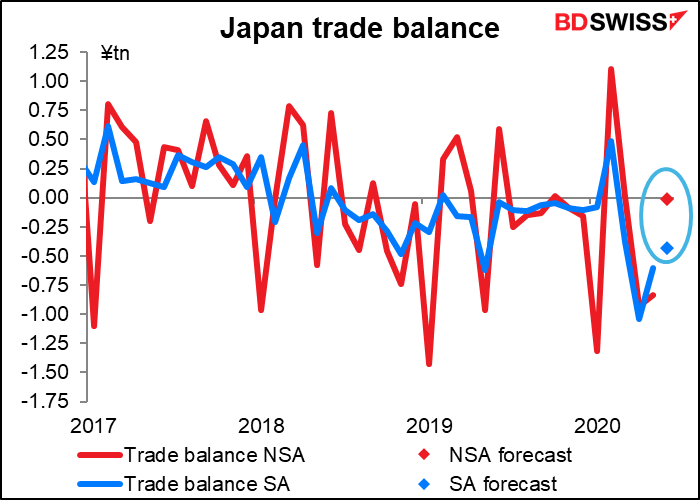 But that’s only because imports are expected to collapse at a faster rate than exports – not a good sign for domestic consumption (unless it’s due to lower oil prices). 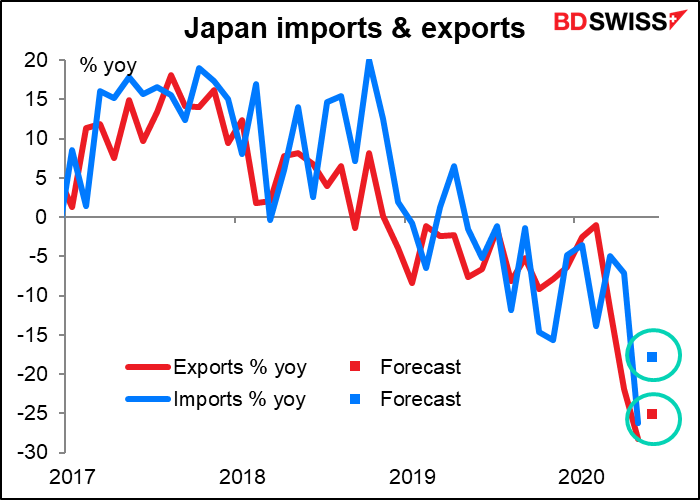 Japan (Tue) and Canada (Wed) announce their consumer price indices. Headline inflation in Japan is expected to remain negative for the second consecutive month. Decades of monetary experiments starting with the-then revolutionary, now commonplace Zero Interest Rate Policy (ZIRP) in 1996, and here we are 24 years later, still trying to dig the country out of deflation. No forecast available for Canada yet. 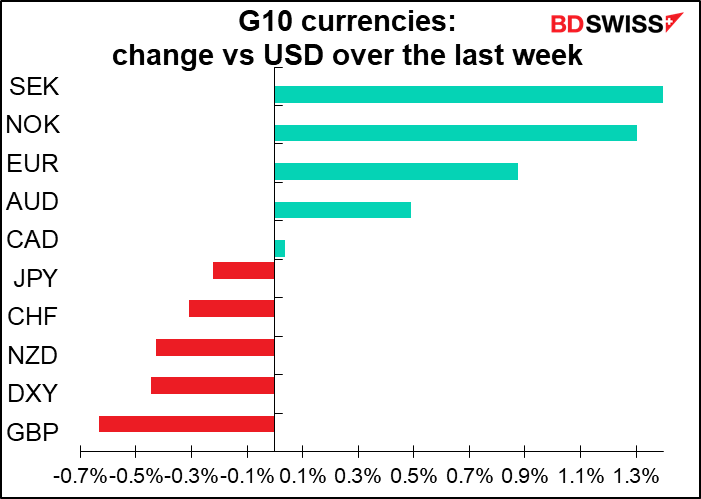