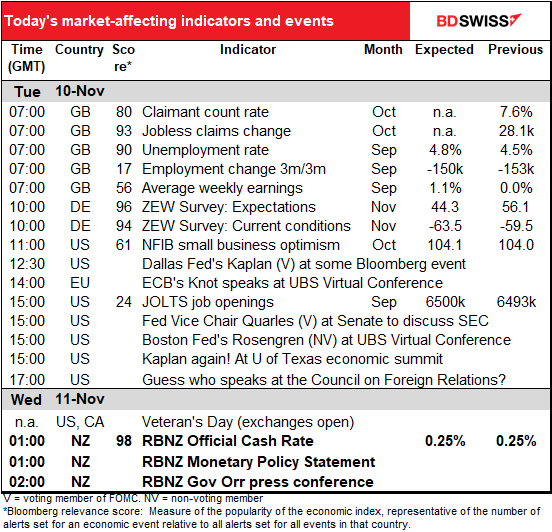 The Republicans still refuse to accept that Biden won the election and are continuing to file baseless, ridiculous lawsuits around the country, most of which are getting thrown out of court due to lack of evidence. In Nevada for example they claimed a large number of people had voted who don’t live in the state. As it turns out, most of them are military families who have moved elsewhere but still vote in their home state. Give me a break. I still vote in my hometown in Ohio even though I haven’t lived there since 1979.

It seems that the Republicans are carrying out this charade simply to boost Trump’s ego. The Washington Post had a comment that was widely quoted:

“What is the downside for humoring him for this little bit of time? No one seriously thinks the results will change,” said one senior Republican official. “He went golfing this weekend. It’s not like he’s plotting how to prevent Joe Biden from taking power on Jan. 20. He’s tweeting about filing some lawsuits, those lawsuits will fail, then he’ll tweet some more about how the election was stolen, and then he’ll leave.”

Of course it does do more damage than that. The political appointee who heads up the General Services Administration (GSA) is refusing to give president-elect Biden access to the facilities & money (about $10mn) needed to get started on the transition, because she claims the election hasn’t been settled yet. This will hinder and delay the process of getting the new government set up. Moreover, it simply calls into question the integrity of US elections, which is damaging in and of itself.

The real danger is if it delays the final decision past Dec. 8th, some legislatures may decide to throw out the results and declare Trump the winner. But I think that possibility is fading fast.

Personally I think US elections are sometimes rigged, but largely by Republicans. People have forgotten the way Floriday tipped to Bush by fewer than 600 votes under a Republican state administration and Republican-appointed Supreme Court judges. Also in 2004, the head of the Ohio voting system was a Republican who vowed to deliver the state to Bush, and indeed there were notable discrepancies that year between the vote and the exit polls – a measure that is often used as a marker for vote-tampering in developing countries. But everyone seems to have forgotten this.

It was “risk-on” all the way around after two pharmaceutical companies, Pfizer and BioNTech, revealed a breakthrough in the race to find a Covid-19 vaccine.

The news is truly significant for several reasons:

The one downside from the news:  the vaccine has to be kept at extraordinarily low temperatures (below -80o C), which means it’s virtually impossible to distribute in many developing countries. Besides, few developing countries have signed agreements with Pfizer. Thus this particular vaccine is likely to benefit the developed world more than the emerging market countries.

The news set stock markets on fire. The S&P 500 rose 3.9% during the day to hit a record high intraday before falling back; it still closed up 1.2%.

There was significant divergence among sectors, though. The Russell 2000 index of small-cap stocks, which is seen as a barometer of the US economy, surged 3.7%, but the tech-heavy Nasdaq Composite, which includes many of companies that have benefited from the shift to working from home, fell 1.5%. Airlines, hotels and airplane manufacturers were some of the best-performing stocks. UK jet engine maker Rolls-Royce had its best day ever, up an astonishing 44%, while video-conferencing company Zoom dropped 17%.

In Europe, the Euro Stoxx 50 soared 6.4%. Those countries that have been hit hardest by the pandemic saw the strongest gains. Spain’s Ibex index rose 8.6%.

Meanwhile, government bond yields generally rose (i.e. prices fell) on expectations that central banks wouldn’t have to loosen policy as much as had been anticipated. Longer-dated US Treasury yields move up over 10 bps. But corporate bond yields fell as investors assume that with the economy doing better, companies are safer investments.

The reaction of the dollar was somewhat surprising. Initially the US currency fell, as is its wont when stock markets are in a “risk-on” mood. EUR/USD briefly surged above 1.19. However, things quickly turned around and EUR/USD wound up falling about 0.5% on the day. The widely watched but poorly constructed DXY index is up 0.53% this morning vs where it was yesterday morning.

The reason for the sudden turnaround in the dollar seems to be a shift of funding into low-yielding currencies as US interest rates continue to move higher. 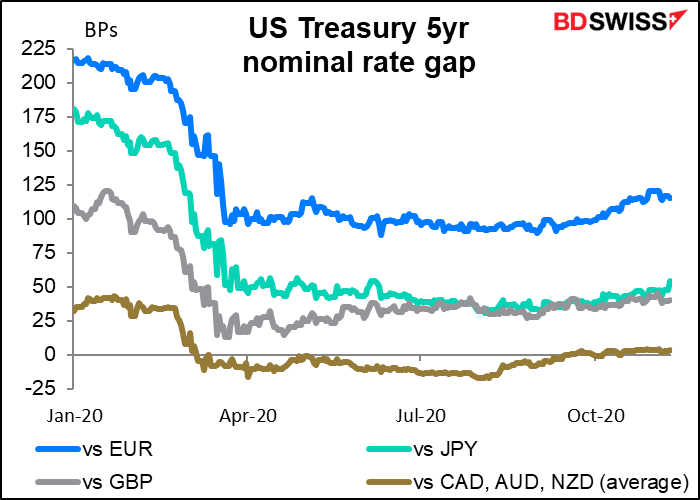 Elsewhere, the FX and commodity market reactions were more what you would expect. Safe-havens got crushed. JPY and CHF were the main losers in FX, while gold and silver plunged. Oil gained on the assumption that Americans will all soon be back in their cars cruising for burgers again.

With oil up, the underperformance of CAD is somewhat surprising to me. Or perhaps I should say that the outperformance of NZD was notable. NZD/USD was up 0.31% while AUD/USD was down 0.18% (vs yesterday morning). That’s because market participants have put on trades in the swap market assuming that New Zealand would have to institute negative rates in the near future, but they unwound some of those trades yesterday as it might not be necessary now.

The move yesterday can probably be summed up as “high beta” currencies, those that benefit significantly from a recovery in the global economy, doing well while “low-beta/low yielding” currencies underperform as investors diversify their funding. These moves make sense in the context of higher US interest rates. We could see these trends continue for some time as investors increasingly discount a return to normality.

We discussed the UK employment data yesterday. The actual figures were largely in line with expectations.

The ZEW survey of pundits, such as analysts and economics, is expected to be poor. Both the current situation and expectations for the future are expected to deteriorate further. 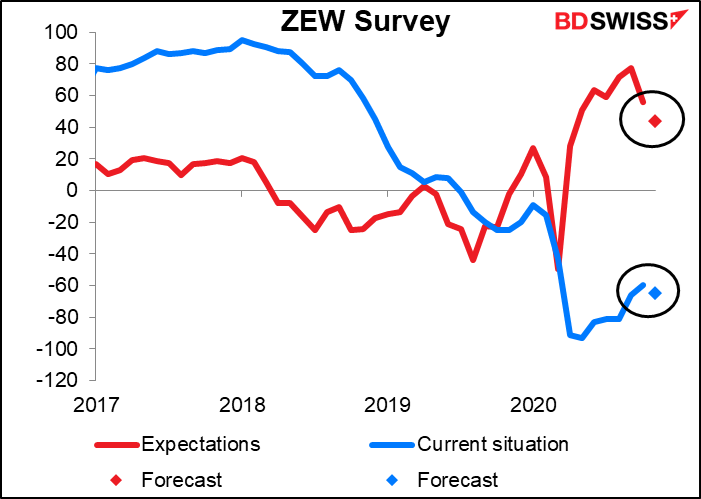 That’s no surprise, given the recent surge in cases of the virus and the reimposition of a partial lockdown. 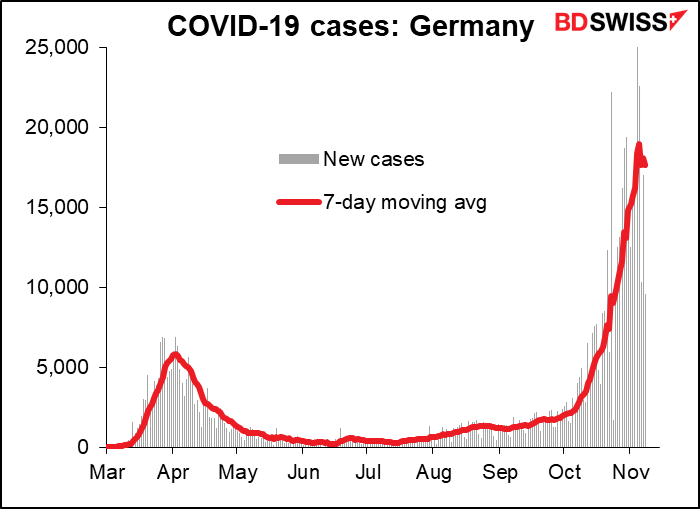 The optimism survey by the National Federation of Independent Businesses (NFIB), the small-business association, last month showed optimism back up to pre-pandemic levels, in contrast to the consumer optimism surveys, which show it still depressed. But the hiring plan index (which is released before the overall index) is trending down, a bad sign. Let’s see how it goes next month, now that the elections are over. 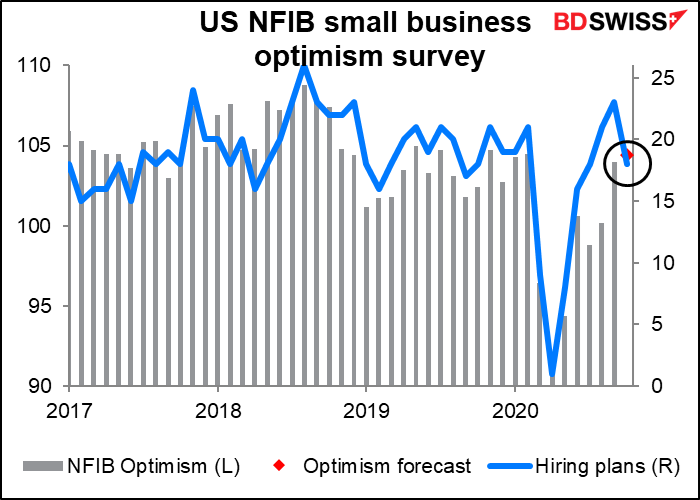 The Job Offers and Labor Turnover Survey (JOLTS) report has an extremely low Bloomberg relevance score, so I guess it’s not particularly market-affecting. It is a month behind the employment data and so a bit out of date. I think it’s worth watching as an indicator of future employment reports – if the number of job openings increases, then it’s going to be easier to get a job in the future. Alas the forecast is for the number to be unchanged this month (September), consistent with the slowdown in hiring that we’ve seen in the other US employment data. 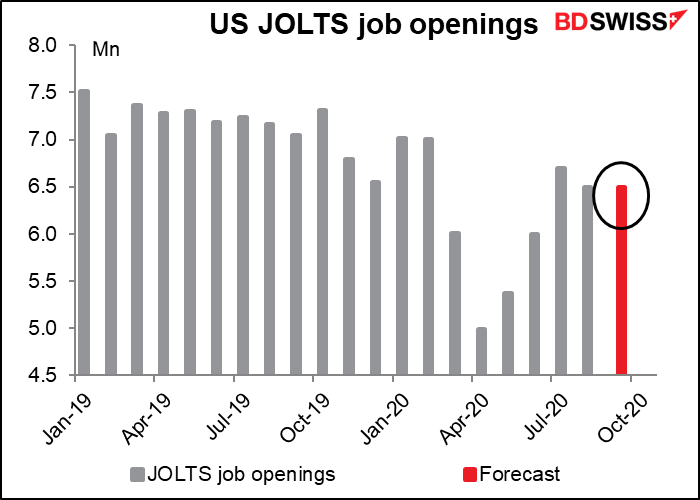 This survey had its heyday when Janet Yellen was head of the Fed. She watched the job openings figure closely, also another figure in this release – the quit rate. That’s the percent of people with jobs who voluntarily quit their job. It’s an indication of how confident people are about getting another job. So far, the answer is: surprisingly high, in my view. The quit rate of 2.0% was the same as back in 2015, when the unemployment rate was around 5%.

Why is the quit rate so high? According to the Bureau of Labor Statistics, quits have fallen in most industries but risen in the federal government. In other words, it’s people deserting the sinking ship of the Trump administration. 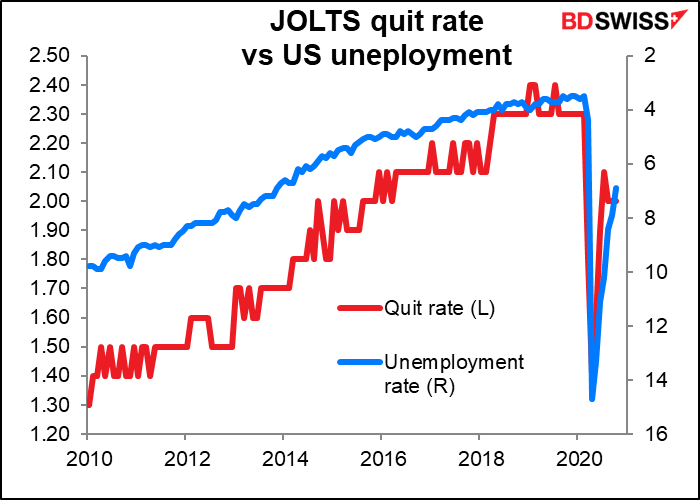 After that there are just a couple of speakers, none of whom are likely to say anything significant for the markets. Boston Fed President Rosengren is talking about financial stability, Fed Vice Chair for Supervision Quarles will appear with other regulators before the Senate Banking Committee to discuss oversight of the Securities and Exchange Commission.

Overnight, the Reserve Bank of New Zealand (RBNZ) are likely to keep both their Official Cash Rate (OCR) and quantitative easing program unchanged. They may however add a “Funding for Lending Programme” (FLP) to the menu, as they hinted strongly back at their last meeting in September.

This sort of program, in which a central bank subsidizes loans that banks make to their clients, is a common policy tool among central banks as a way to ensure banks pass on the benefit of low interest rates to clients while also mitigating the cost of negative rates to the banks. The European Central Bank (ECB) for example has its Targeted Long-Term Refinancing Operations (TLTROs), which are quite successful in getting money out to borrowers.

We may also get an update on how banks are preparing for negative rates. That discussion is all the more important in the context of yesterday’s news about a possible vaccine, as the market now sees negative rates as less necessary.

There could be some action in NZD if the RBNZ comes up with anything unexpected. 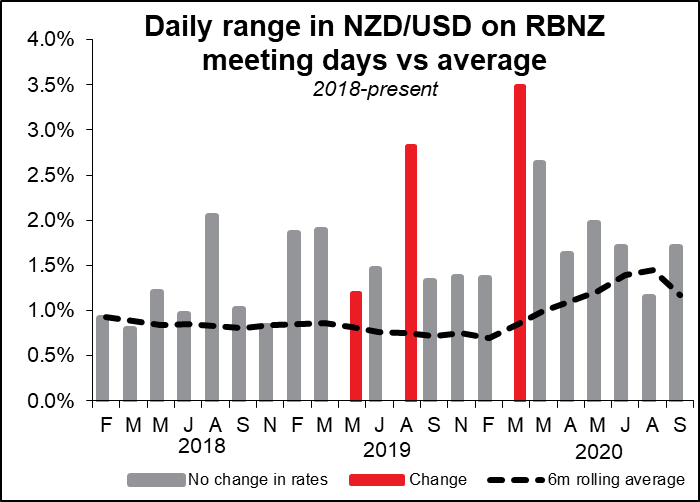 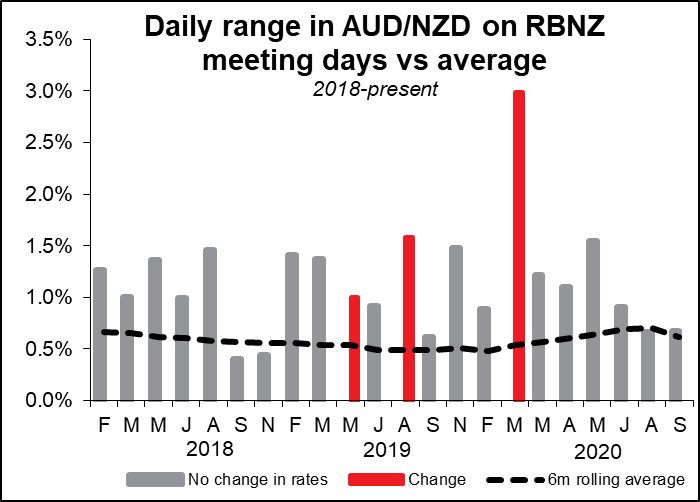 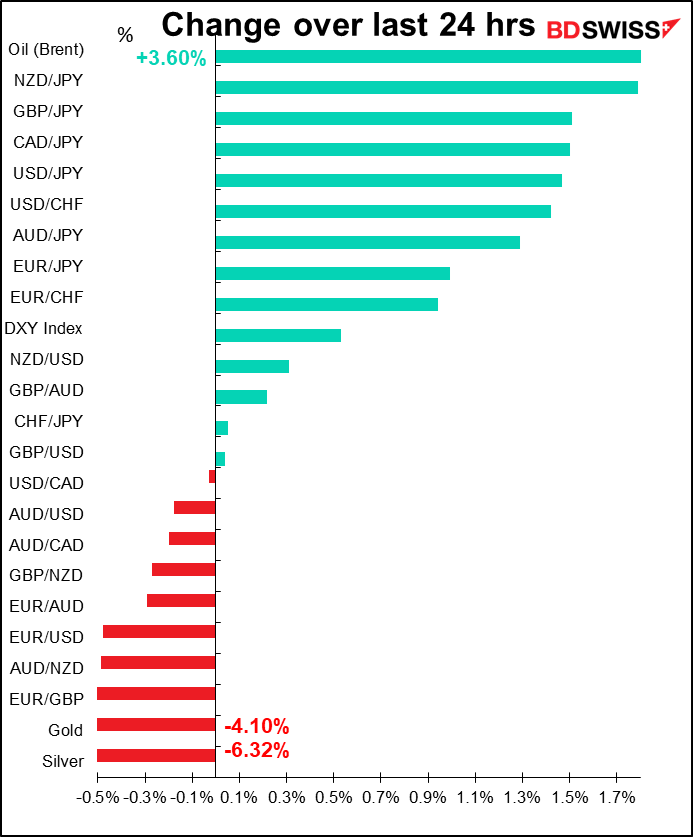