You are at:Home»MARKET PREVIEW»NZD Up on RBNZ Rethink, GBP up on Vaccine Hopes; Quiet Day ahead 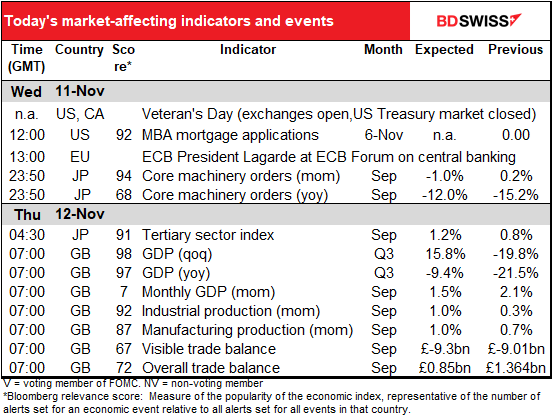 The election fraud continues – the fraud being, of course, the allegation that Trump lost because of fraud. Here’s a headline from today’s New York Times:

It’s amazing to me how thoroughly this fraud has permeated the entire Republican party. It’s not just a few of Trump’s consiglieres who are perpetuating this lie to support Trump in his fantasy. As the NYT said:  “What emerged in The Times’s reporting was how, beyond the president, Republicans in many states were engaged in a widespread effort to delegitimize the nation’s voting system.”

I doubt if the lawsuits etc. will manage to delay certifying the vote long enough to cause any serious problems, but even just delaying giving President-elect Biden access to the transition facilities & money damages the country. More proof, if needed, that these people put party over country.

The longer-term problem is that this belief is likely to become an article of faith among Trump supporters, who will no doubt insist for years that the election was stolen. Like some end-of-the-world cult that is discomfited when the world still exists after their Doomsday has passed, they won’t change their beliefs because they don’t fit the facts – they will rationalize the facts to fit their beliefs. This will keep Trump in a position of behind-the-scenes power in the Republican Party and perhaps impede the attempts to hold him responsible for the crimes he’s committed over the years.

It’s Veteran’s Day in the US.  The stock and commodity exchanges will trade as normal; but the Treasury market will be closed.

Stock market indices in the US were lower yesterday despite the good news about the vaccine. The main story was rotation among sectors rather than selling of equities in general. Many of the stocks that have benefited from the pandemic, such as Amazon and Microsoft, fell, with a preliminary European Commission ruling against Amazon not helping matters for the tech stocks. Nonetheless it was not what one would call a “risk-off” mood by any means. The more cyclical/less tech-oriented Stoxx 50 rose, while bond yields on both sides of the Atlantic continued to rise.

NZD was once again the best-performing currency. It took off after the Reserve Bank of New Zealand (RBNZ) meeting overnight. The Bank by no means ruled out a negative interest rate – on the contrary, they said that “Progress has been made on the Bank’s operational ability to deploy an FLP and a negative OCR. The Committee agreed that these instruments can be mutually supportive in bolstering economic activity if necessary.” They said “staff were prepared to implement an FLP from early December.” (FLP = funding for lending program) (OCR = official cash rate).

Nonetheless, the market concluded that a negative OCR is unlikely now as the RBNZ is less pessimistic about growth and inflation and sees the unemployment rate peaking at a lower-than-expected level. “Economic activity since the August Monetary Policy Statement, both international and domestic, has proved more resilient than earlier assumed. In New Zealand this trend was evident across a range of indicators, including employment, household spending, GDP, and asset prices,” they said.

RBNZ Gov. Orr didn’t share the market’s confidence, however. At the press conference following the meeting he said “it’s too early to tell” whether a negative rate would be necessary. “We want to leave all options open and we’ll be revisiting that decision at our next monetary policy committee, which is February,” he said. A rethink of today’s rally seems likely to me and I would expect NZD/USD to retrace some of its gains.

I have no idea when a vaccine will be available in New Zealand. Dr Fauci, the top US infectious-disease expert, yesterday said one could be available in the US for healthcare workers and other high-risk groups by the end of this year, while lower-risk Americans could have access by April 2021. Nonetheless there’s bound to be difficult times between now and February as the virus explodes in Europe and the US. I don’t think any country is out of the woods yet.

GBP was the second-best performer, for a couple of reasons. First off, the news about a possible vaccine was particularly encouraging for sterling. Since Britain has been disproportionately hit by the virus, it will be disproportionately helped by a vaccine. Secondly (sorry – I failed to notice this yesterday) the House of Lords Monday voted overwhelmingly to remove clauses in the internal market bill that would allow ministers to overrule parts of the EU withdrawal agreement. While PM Johnson says he’ll reintroduce the clauses in Parliament, he faces an uphill battle to get them reinstated. Getting rid of these clauses makes it more likely that the UK can reach some sort of agreement with the EU before the deadline. I’m getting increasingly optimistic? Hopeful? Deluded? that they will indeed be able to finesse this at the last minute.

Movements in other currencies were not particularly significant, although a weaker CAD on a day when oil prices were up 5% does stand out. Oil rose after the American Petroleum Institute (API) reported a big drawdown in crude oil inventories of 5.15mn barrels for the week ending November 6, far more than predictions for a drawdown of only 913k barrels. The move in CAD seems to have been just a reaction after the currency hit a two-year high vs USD the previous day.

I use this graph so often to show how CAD follows oil, I want to include it today to show that sometimes they don’t move together.

Precious little during the European and US days. 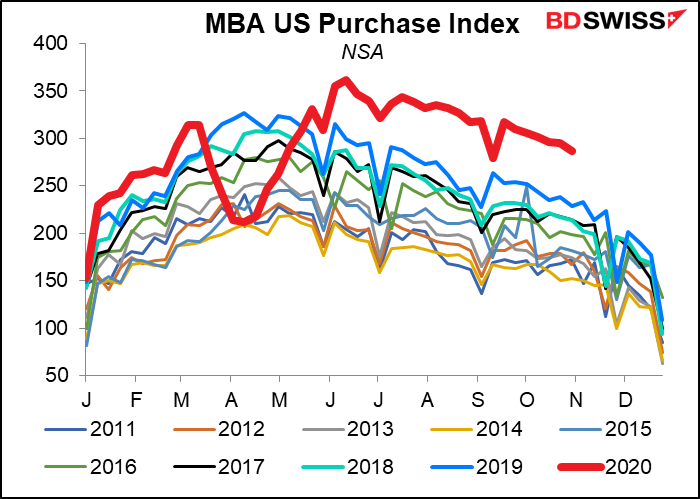 After that, the frequently speaking ECB President Lagarde will make the proverbial opening speech at (is that the right preposition for a virtual summit? Or should it be “for”?) the European Central Bank (ECB) two-day online seminar, “Central banks in a shifting world.”  As I mentioned in my weekly, they will be discussing de-globalization, macroeconomic implications of climate change, monetary policy challenges from falling natural interest rates, etc. The Big Event will be 16:45 GMT tomorrow, a one-hour policy panel with Lagarde, Bank of England Gov. Bailey, and Fed Chair Powell.

I won’t bother you with the corporate goods price index, which isn’t particularly relevant to the FX market.

Japan machinery orders are a seemingly random series of numbers that barely show a trend even with a six-month moving average, but everyone watches them closely nonetheless. They’re expected to fall a little less than in the previous month, but that would still leave the six-month moving average a bit lower anyway. So not much change expected from the downward trend. 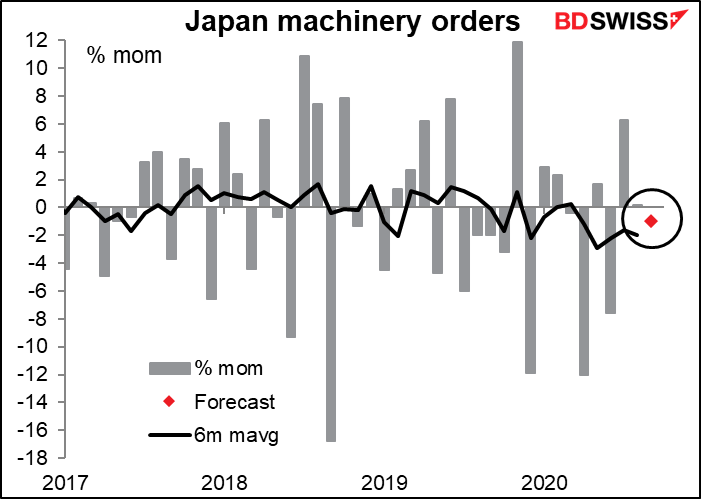 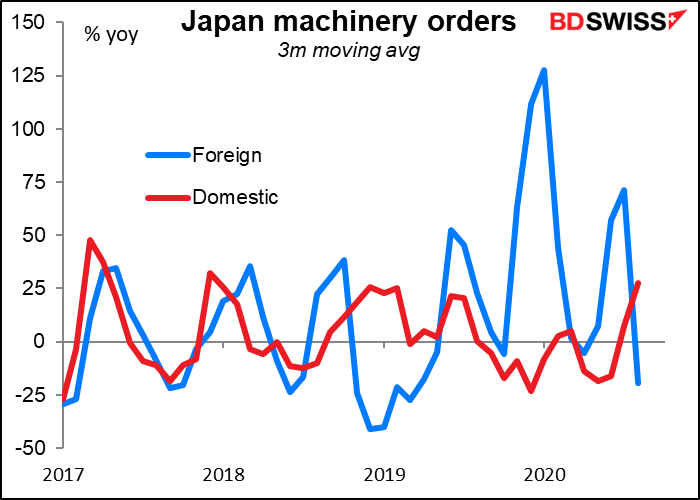 Japan’s tertiary sector index is expected to recover at an accelerating pace. This follows yesterday’s Eco Watcher’s Survey, which showed the current situation back above 50, signifying optimism among service-sector workers. (The tertiary sector is the service sector.) 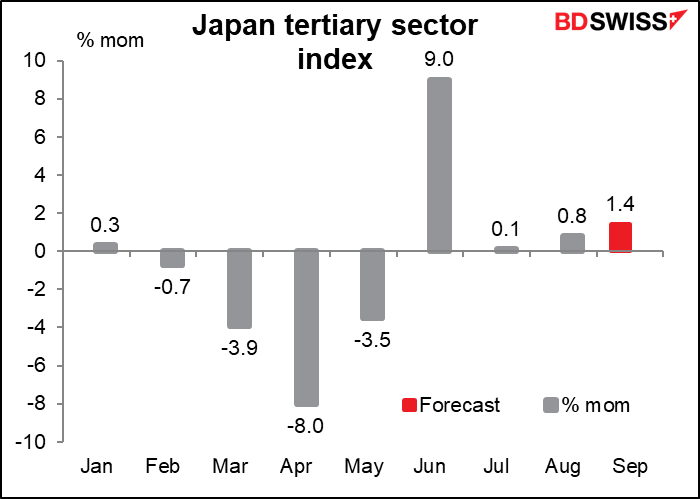 But even with a steady recovery, the tertiary sector remains well below its pre-pandemic levels. That’s consistent with the service-sector purchasing managers’ index for Japan, which has stubbornly remained under 50. 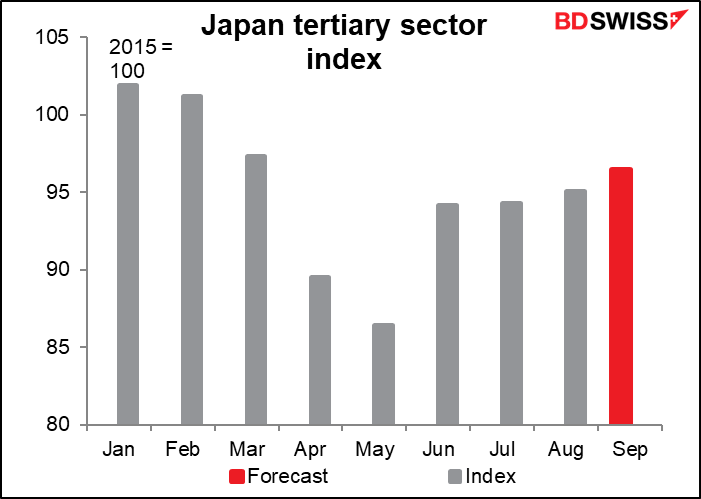 Then when dawn breaks over the Tower Bridge, the focus shifts to short-term indicator day in the UK, with the GDP, industrial & manufacturing production, and trade data. 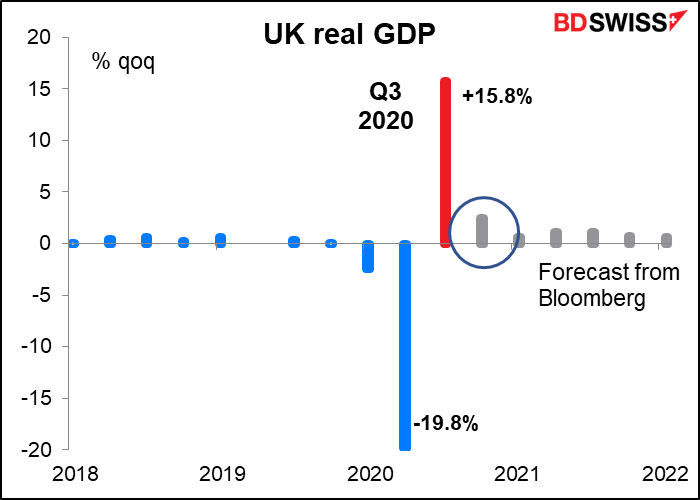 Q3 GDP will be the main focus of interest. It’s expected to show a record rise, but that’s just a rebound from the record plunge in Q2 (as happened around the world). The figure is likely to show strong growth but not as strong as the Bank of England expected back in August (around 20% qoq) and so should confirm the Bank’s downgrade to its growth forecast in last week’s Monetary Policy Report.

Growth in the UK is losing momentum. The September monthly GDP figure should be positive but show much more sluggish growth – and this was even before the tougher restrictions came into force during October and November. October and subsequent months are likely to be negative until restrictions ease. 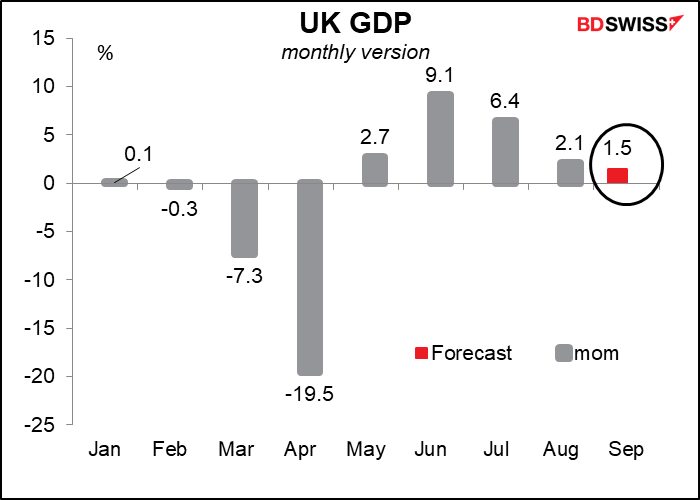 If you look back at the quarterly GDP graph, you’ll see that Q4 growth (circled) is forecast to be positive. This is the Bloomberg consensus forecast. It’s likely to be revised downward.

Even based on current forecasts though, the UK is expected to lag the US and Eurozone in recovering back to pre-pandemic levels. This does not bode well for the country’s resilience in the face of the inevitable shock when the umbilical cord to the Continent is finally severed on 1 January! 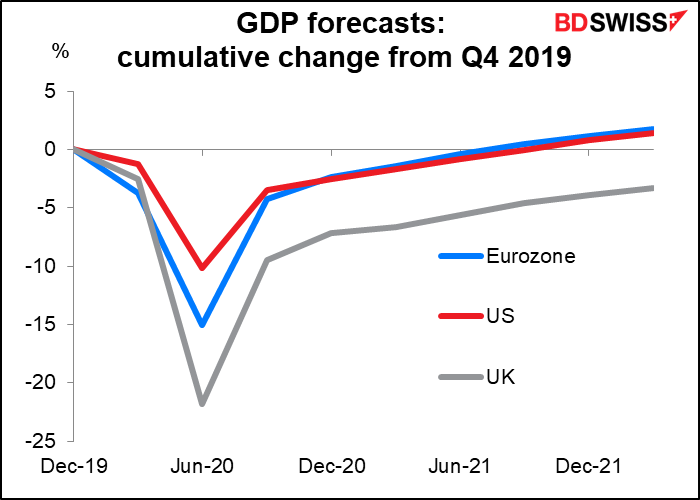 UK industrial production and manufacturing production are both expected to rise by 1.0% mom, which in both cases is a bit faster than the previous month (I had to fiddle with the numbers so both dots were visible). 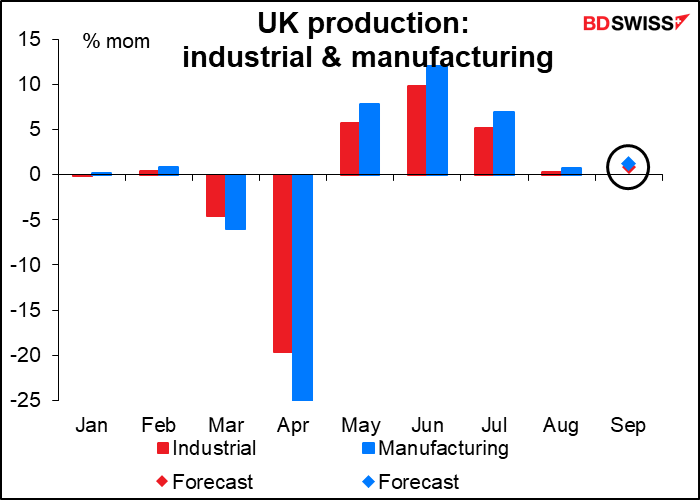 Manufacturing production hasn’t recovered as quickly as overall industrial production. IP is down 4.9% from pre-pandemic levels while manufacturing is down a more substantial 7.2%. Generally the market pays more attention to IP than to manufacturing alone. 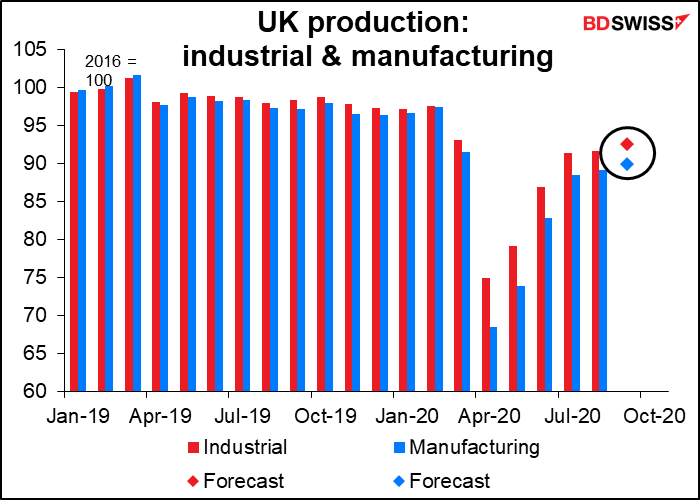 The UK trade picture is expected to worsen slightly, with the visible trade deficit widening a bit and the overall surplus diminishing as a result. 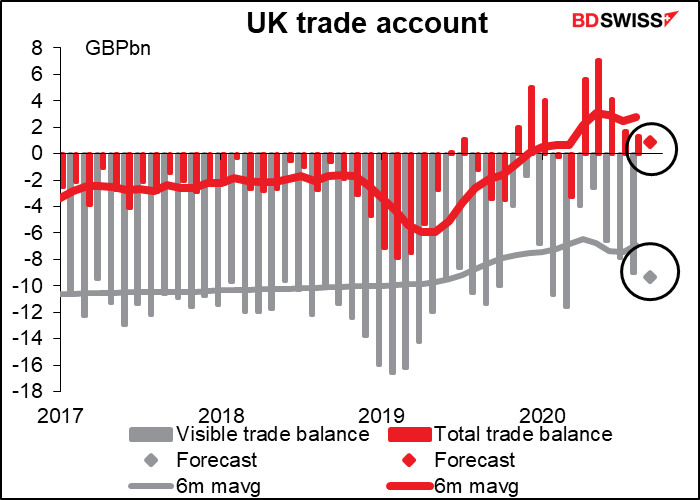 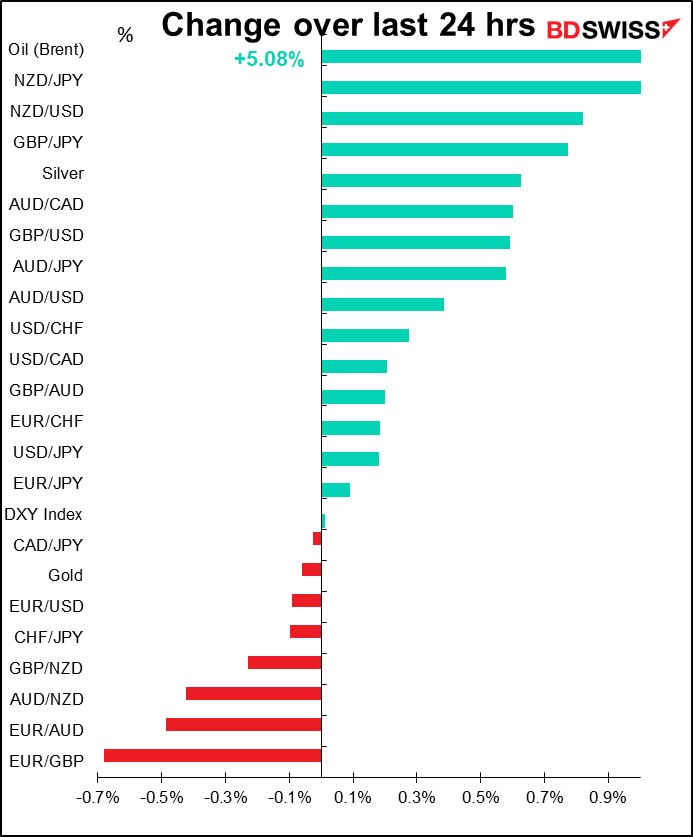