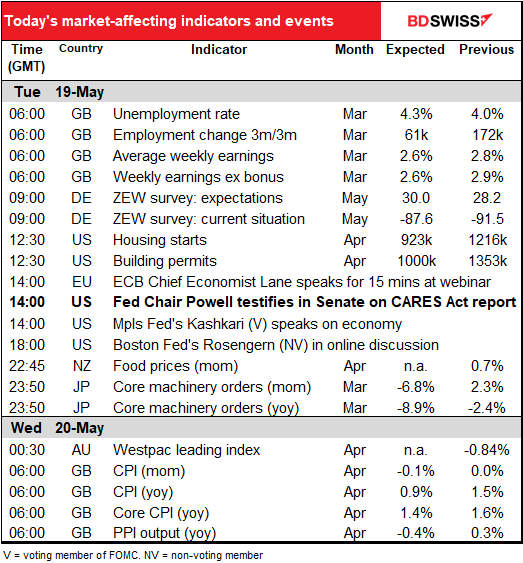 Stocks soar! S&P 500 up 3.2%, all Asian markets (even India!) up this morning after drugmaker Moderna said the first human study of its experimental coronavirus vaccine induced immune responses in some of the healthy volunteers who were vaccinated, according to the WSJ. One might ask whether a response in “some of” the 45 people in the trial is enough to warrant adding nearly $1tn to the value of the US equity markets. However, investors extrapolated from this news that even if the Moderna vaccine doesn’t work, it looks as if some vaccine could work eventually.

Sentiment was also helped by a rebound in oil prices. Two fundamental drivers are pushing oil prices higher: First, demand in China is almost back to pre-virus-crisis levels,  according to Bloomberg News. That’s not only bullish in itself – China is the world’s second-largest oil-consuming market – but also bodes well for a rebound in global demand once countries emerge from lockdown. Secondly, OPEC+ members have been complying with their agreed production cuts better than expected. Russia and Kazakhstan have pledged “strict” compliance while Saudi Arabia, Kuwait, and the UAE have agreed to cut production more in June.

Also, Fed Chair Powell’s prepared testimony to the Senate Banking Committee said the central bank will use its “full range of tools to support the economy,” which was seen as an encouraging statement. From my point of view, a) this is nothing new, and b) it falls foul of the “Gittler Inversion Rule,” which postulates that any statement whose inverse is ridiculous is not meaningful in and of itself. That is, we can’t imagine Powell saying the Fed would use “most, but not all, of its tools to support the economy,” so the fact that he says they’ll use all of them is, well, just to be expected. But experience shows that the market doesn’t work that way and when officials confirm that they expect the sun to rise in the east tomorrow, people tend to get excited if for no other reason than that they expect other people to get excited.

FYI I also noticed that Powell said, “The tools that the Federal Reserve is using under its 13(3) authority are for times of emergency, such as the ones we have been living through. When economic and financial conditions improve, we will put these tools back in the toolbox” (emphasis added). In other words, we can’t expect QE Forever. Still, that’s tomorrow, and if we look at what’s happened in Japan – where overnight rates have been below 0.5% since at least 1996 – tomorrow may never come.

The risk-on mood explains why the first three currencies in my little table above were the commodity currencies, led by NZD probably because it’s been the most bombed-out one recently and therefore ripe for profit-taking. Also why the safe-haven JPY and CHF were last.

Next up was EUR, which benefited not only from the risk-on mood – which encouraged a move out of USD – but also by a joint initiative from Germany and France to create a Recovery Fund for the EU. Chancellor Merkel and President Macron held a joint video conference in which they pushed for a EUR 500bn EU Recovery Fund that would offer grants to EU regions and sectors hit hardest by the coronavirus pandemic. The fund would be financed through bonds issued by the European Commission (EC), which member countries underpin with their contributions to the EU budget. The French-German initiative should be a key element of the proposal that the EC will likely present on 27 May in the run-up to the EU summit on 18-19 June, where all 27 EU member states will have to agree to the recovery fund. The northern countries that will be net contributors may oppose contributing money to a fund that provides grants rather than loans, but I expect that with Germany’s backing, the proposal will go through.

The move is highly significant. The ECB – the monetary authorities – have been doing “whatever it takes” to support the Eurozone economy ever since the crisis broke, but it’s been harder to get an agreement among the fiscal authorities. If the EU now adopts such a major joint “recovery fund,” they’ll have finally agreed on an adequate joint fiscal response as well. That would be a significant sign of pan-European cohesion. Better late than never.

Peripheral bond spreads narrowed notably in response to the proposal. 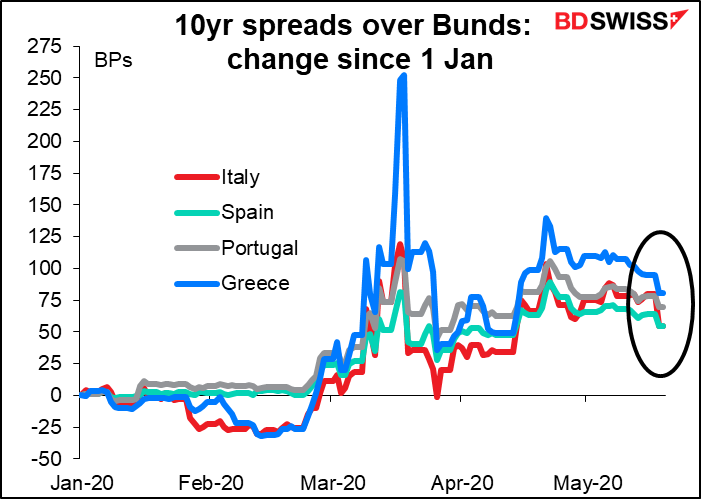 EUR/CHF, which has been preternaturally steady at just above 1.05 for the last few days (suggesting that “supernatural forces” emanating from Zurich have been preventing it from moving lower) suddenly spiked up to the 1.06 level.

We discussed the UK employment data in great depth and detail yesterday, so no need to run through that again.

The ZEW survey is an opinion survey of a mere 350 economists, analysts and other parasites on productive society, not actual workers who create anything of value, so it’s more of interest as a market sentiment indicator than a real indicator of where the world is headed (unlike the Ifo index or the purchasing managers’ indices, for example).

The expectations index saw its largest-ever one-month drop (-58.2 points) in March, which turns out to have been correct:  the following month, the current situation index fell a record 48.4 points (data back to Dec 1991). Yet the record fall in the current situation coincided with a record rise in the expectations index (from -49.5 to +28.2, a 77.7-point flip). (Three records in two indices in two months:  is that a record, too?)

Following those gyrations, the indices aren’t expected to change much this time. Not much excitement. 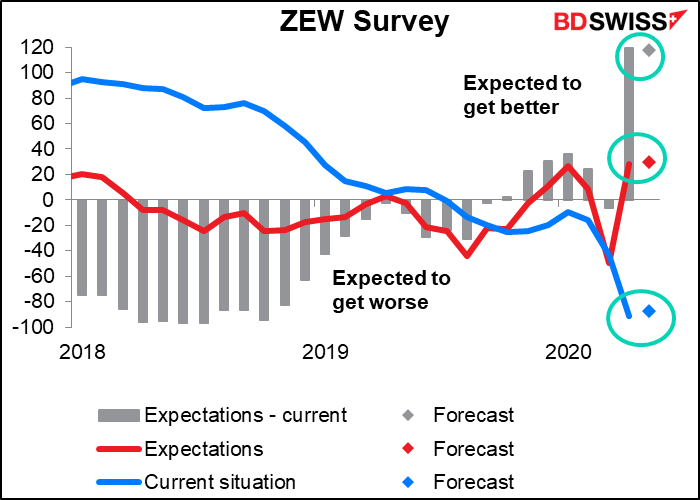 By the way, such big gaps between the view on the current situation and expectations for the future aren’t unprecedented, as the longer-term graph below shows. Analysts are well aware that the economy tends to be mean-reverting, a tendency that’s only increased in modern times thanks to counter-cyclical economic policies. The big question is whether the current situation is an unprecedented exception. Harvard’s Carmen Reinhart and Kenneth Rogoff, who wrote the famous history of financial melt-downs This Time Is Different: Eight Centuries of Financial Folly, were quoted yesterday as saying that yes, this time really is different. You might want to cast a butcher’s at that article to read just how unique in human history the current period is. Just one example: in 1918, the year the Spanish Flu epidemic peaked, US GDP rose 9% in real terms. 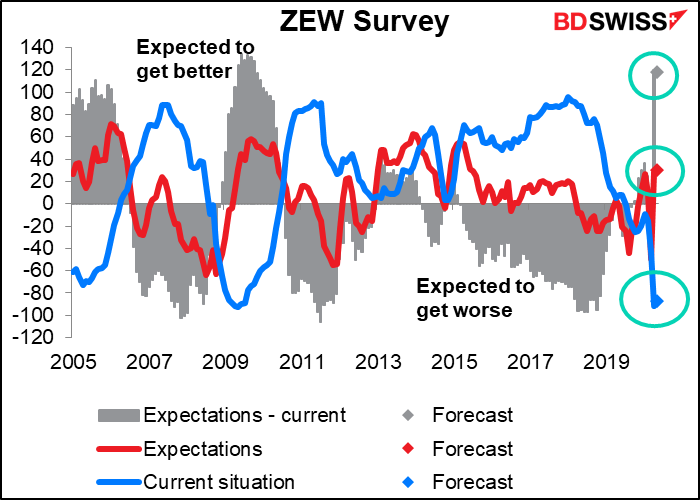 US housing starts and building permits are expected to plunge, but not to extraordinarily low levels – just back to the levels of a few years ago. 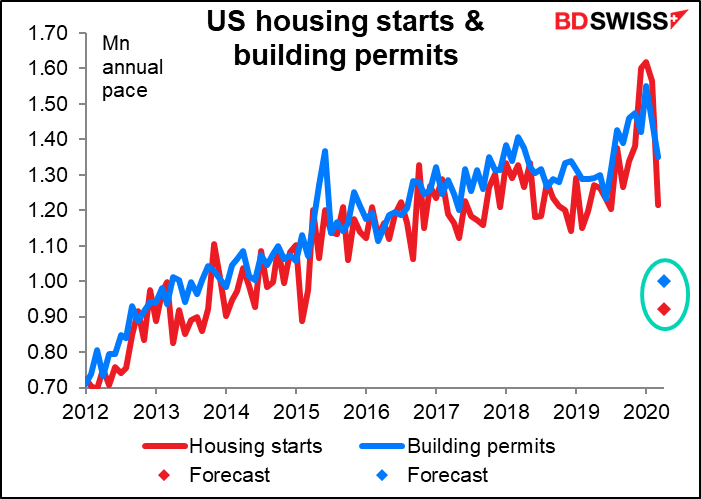 Given the plunge in the National Association of Home Builders’ (NAHB) index, this should surprise exactly no one. 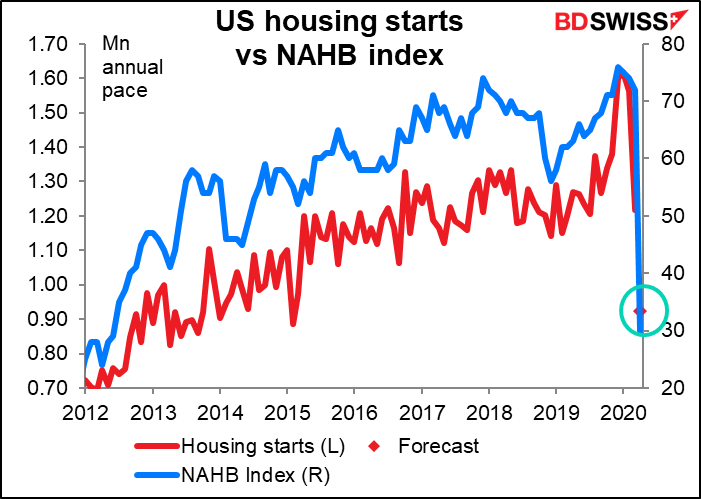 Next, Fed Chair Powell will testify on the Coronavirus Aid, Relief, and Economic Security (CARES) Act by webcast to the Senate Banking, Housing, and Urban Affairs Committee. Treasury Secretary Mnuchin will also pitch in his two cents. You can watch the proceedings live if you want. These quarterly hearings on the Fed and Treasury’s response to the virus are required under the law that authorized the unprecedented response. I’m sure we’ll hear Republicans complaining that the US can’t afford such largess while Democrats argue that more needs to be done, faster.

Powell has spoken frequently in recent days – he gave a speech last Wednesday at the Peterson Institute for International Economics and on Sunday he appeared on the US TV news program 60 Minutes. Plus his prepared remarks are already out (as mentioned above). I doubt if he’ll break any new grounds in the Q&A. Still, the markets hang on his every word. He’ll be pressed on how soon the economy will start to recover (he expects growth to resume in 2H) and how long it will take – “it depends” is the most likely answer – and may discuss negative interest rates vs more market purchases (no to the former, yes to the latter).

Overnight, Japan releases its machinery orders. This is seen as an important leading index of capital investment, but I’m hard-pressed to see anything in it. The numbers are wildly volatile – even the yoy rate of change swings from positive to negative and back from month to month. The six-month moving averages of both the mom and yoy rates of change are about zero nowadays. It will be no surprise to anyone if the figures show a big drop this month, as probably the only machines anyone was ordering in March were ventilators. 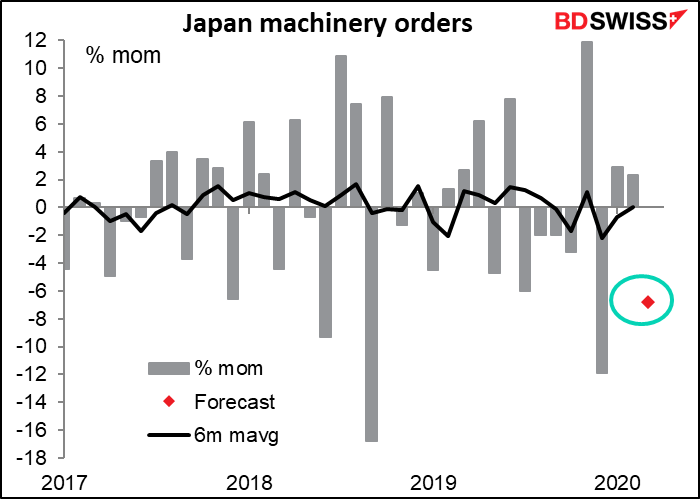 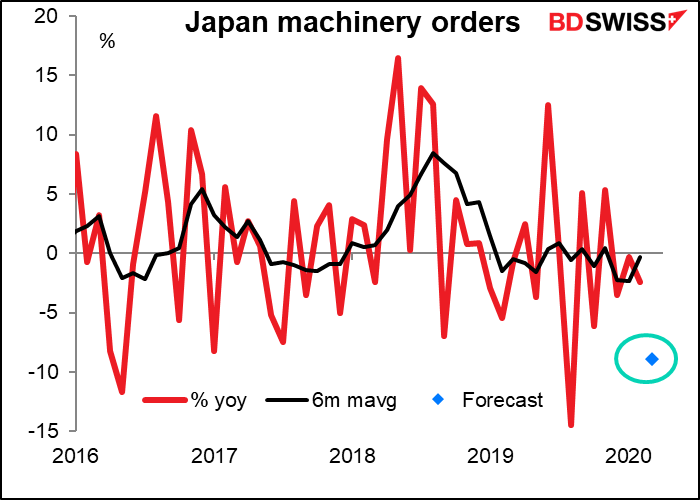 The cycle now comes full circle and once again I’m writing a day ahead of time about a British indicator, this time UK inflation data. Headline inflation is expected to slip below the Bank of England’s band of tolerance – if as forecast the CPI does come in at +0.9% yoy, then “the Governor is required to send an open letter to the Chancellor explaining why inflation has moved away from target and what action the Bank is taking to bring inflation back to target.” 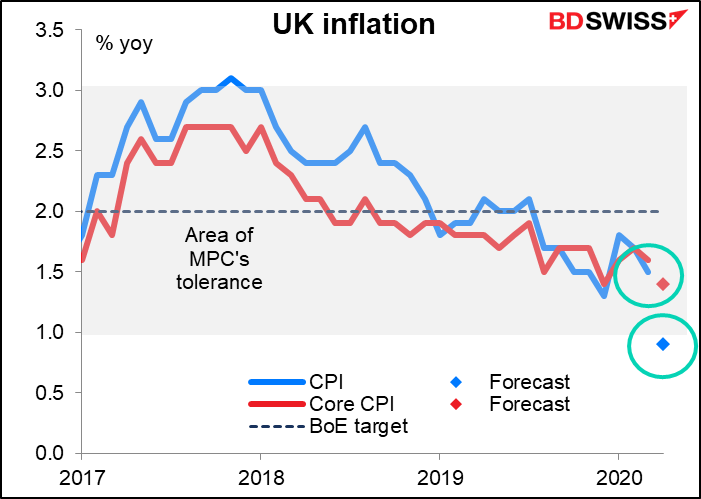 With producer prices falling even more, the downward pressure on UK prices is likely to continue, except perhaps if the pound starts depreciating a lot. 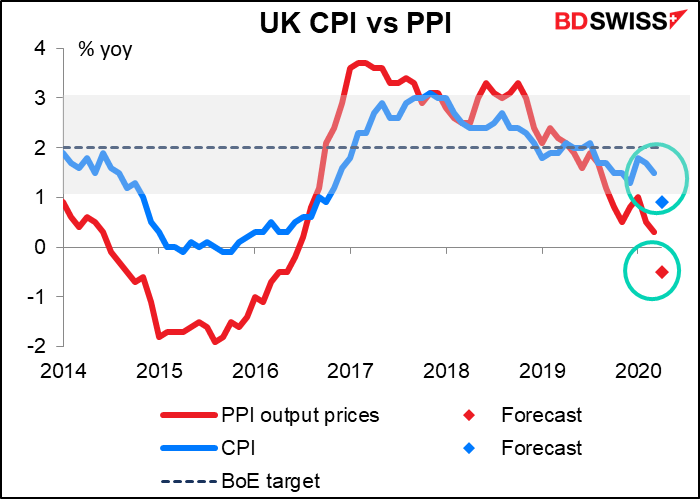 This could open up an opportunity for the Bank – let the pound fall as a way to help get the CPI back into its target territory. That wouldn’t be great for the gilts market, but they can just keep hoovering the bonds up, like every other central bank is doing. A little financial repression to keep rates in check and let the exchange rate take the strain. 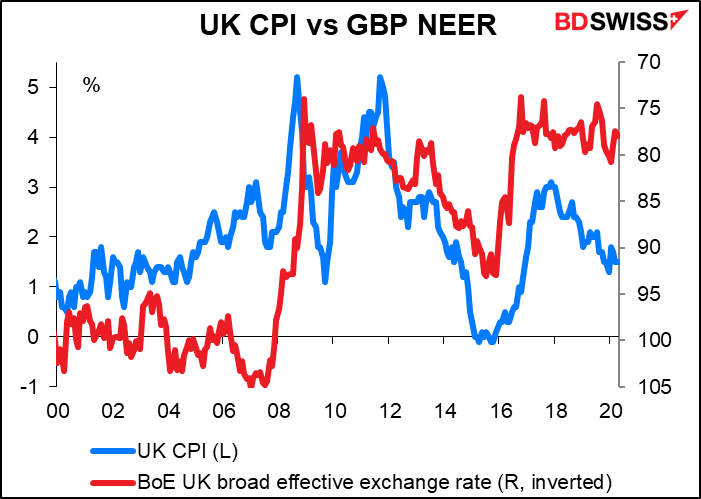 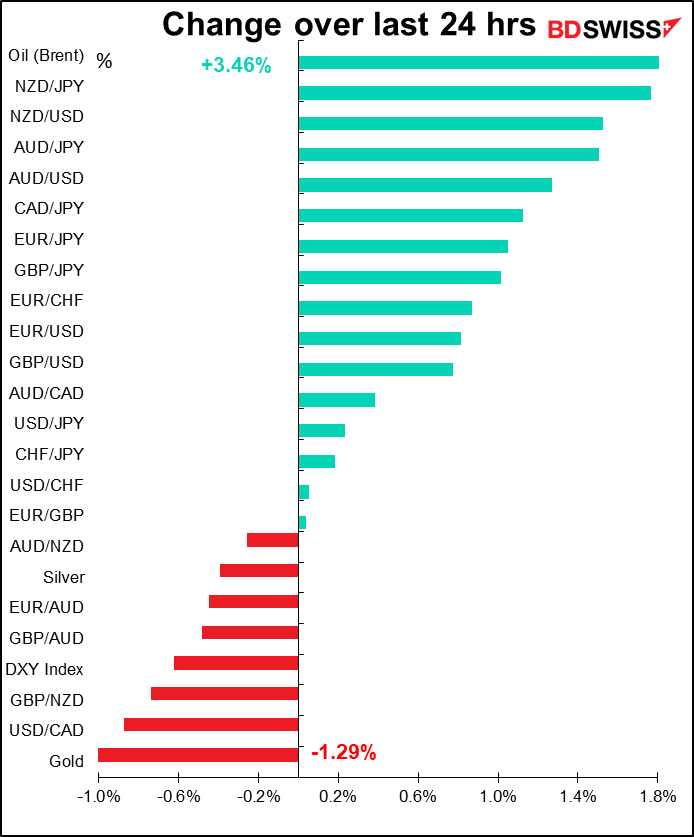