You are at:Home»MARKET PREVIEW»Commodity Currencies Up as Oil Prices Recover; GB Employment Data 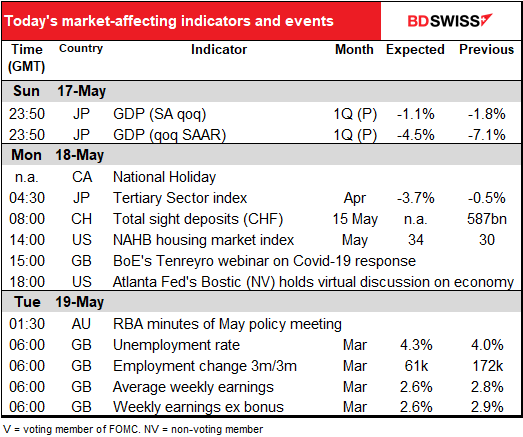 The market had a more “risk on” tone this morning as both WTI and Brent traded over $30/bbl. Signs are that the oil glut is coming under control as US production falls, and perhaps more importantly, there’s hope that as more and more countries emerge from lockdown, activity will recover. Most Asian stock markets were up this morning (except the perenially plunging India) while S&P 500 futures were indicated up about 1%.

US crude oil inventories actually fell in the latest reporting week, albeit slightly. This was the first decline in 16 weeks. 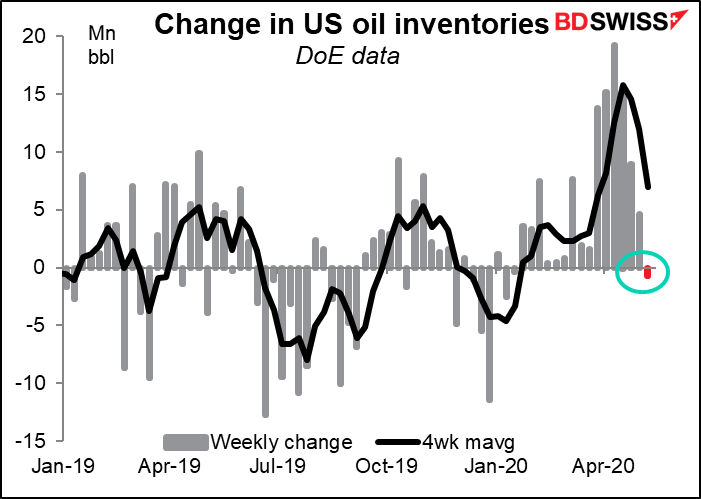 The number of oil & gas rigs in use in the US has fallen by 57% in less than two months to the lowest level since records began in 1985. The US oil industry is shutting down. 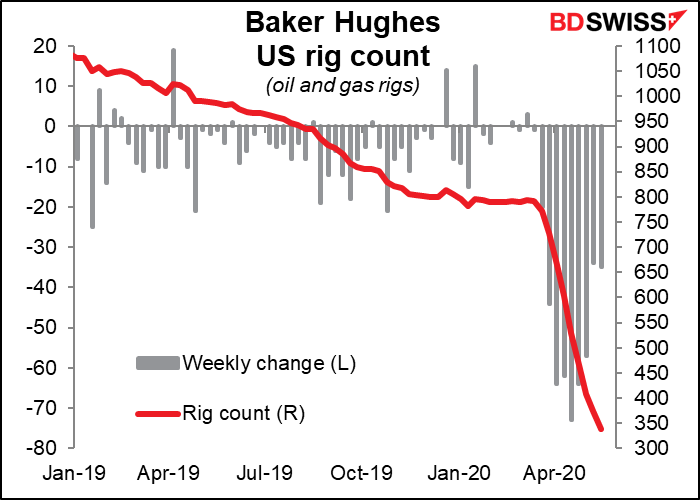 GBP was lower after Bank of England Chief Economist Andy Haldane said in an interview with the Telegraph that the BoE is examining unconventional monetary policy measures, including negative rates and expanding asset purchases, more urgently amid the economic slump. Haldane stressed that the Bank isn’t going to implement any of those policies in the near future, but it’s a contrast with several other countries, such as the US and Australia, which have taken a stance against negative rates.

Specs generally became less bearish on the dollar. The change was spread fairly evenly through several currencies, particularly NZD, followed by MXN, AUD, CHF and GBP, in that order. (They flipped from long MXN to short MXN.)

NZD was the major underperformer in G10 last week after the Reserve Bank of New Zealand (RBNZ) Wednesday doubled its assets purchase program and suggested that negative rates are a possibility in the future. Remember that the CoT figures are taken Tuesday, so we’re likely to see further extension of NZD shorts in next week’s data too.

On the other hand, they added to EUR and JPY longs. 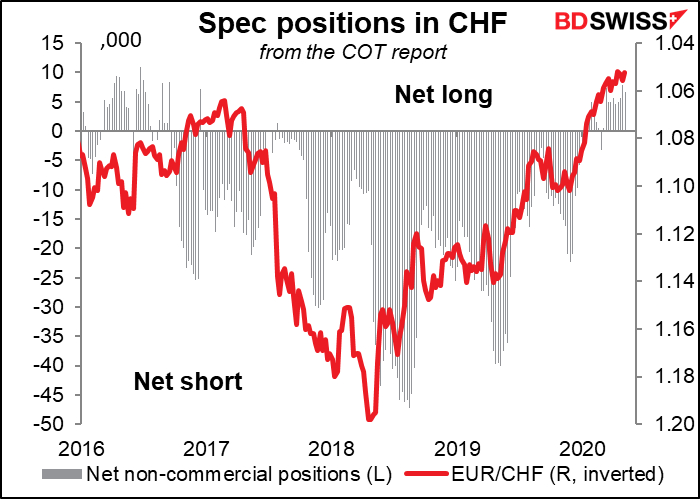 Specs have gotten less positive on GBP for 10 consecutive weeks now – going from a net 35.2k contracts long on 3 March to -13.7k short this week. There’s a lot of room for them to build their GBP shorts further. 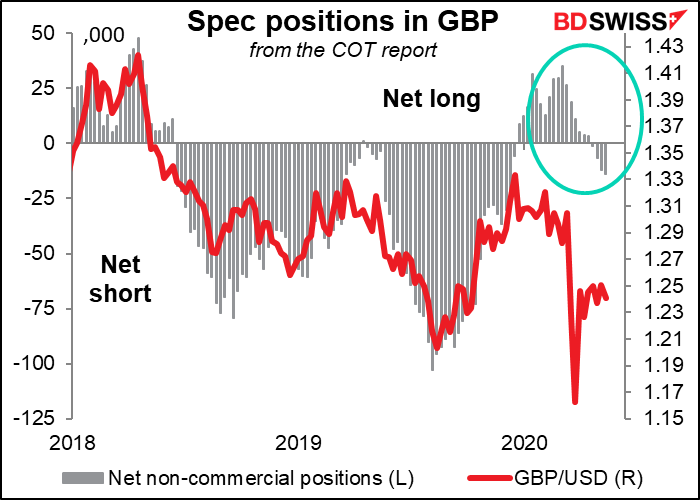 Specs appear to be betting on an improvement in the global economy, as shown by an increase in US Treasury shorts and a decrease in copper shorts. But it’s noticeable that they increased shorts in the commodity currencies nonetheless. It’s hard to discern a consistent world view in these movements.

As the gold/silver ratio came down, specs cut gold longs and added to silver longs. 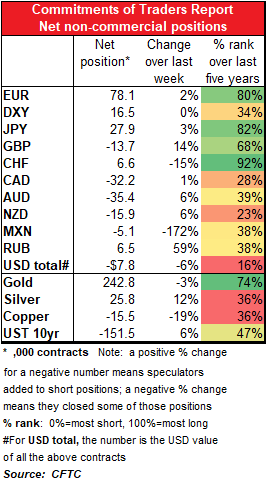 Not much on the schedule for today.

As usual on Monday, the SNB releases its weekly sight deposit data, which gives us an idea of how much they’ve intervened in the FX market. They seem to be holding the line in EUR/CHF at 1.05 pretty successfully; intervention was down a lot in the week ended 8 May without EUR/CHF moving any lower. My guess is that the market got the message and is giving up fighting the SNB (as mentioned above in the CoT report section), so they’ll have to do less intervention from now. 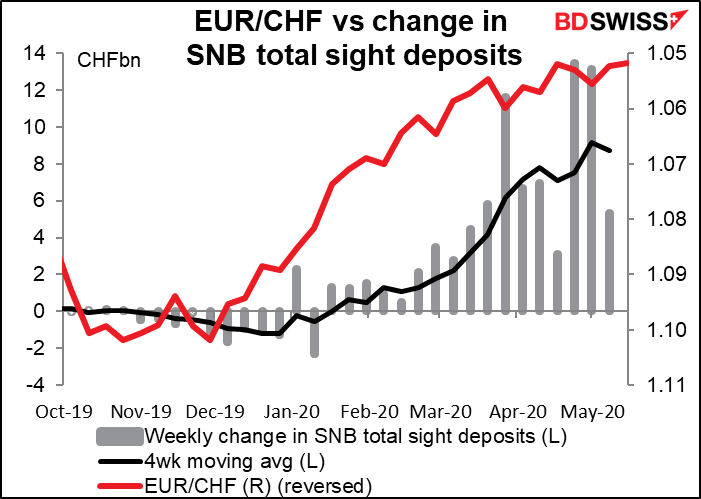 The National Association of Home Builders (NAHB) sentiment index is expected to rebound slightly after last month’s plunge. I suppose that’s because it’s a diffusion index, in which the percent of people saying things are getting worse is subtracted from the percent saying they’re getting better. If  things are at rock bottom, then they’re not going to get worse – more people will be in the “unchanged” category and the index will naturally rise. 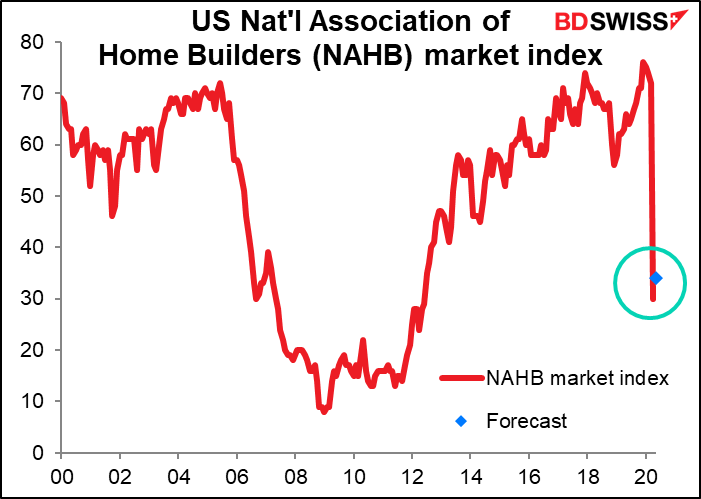 While the level of the index is still well above the depths plunged during the 2008/09 Global Financial Crisis, the speed of the decline last month was unprecedented. But that’s nothing unique to this indicator. 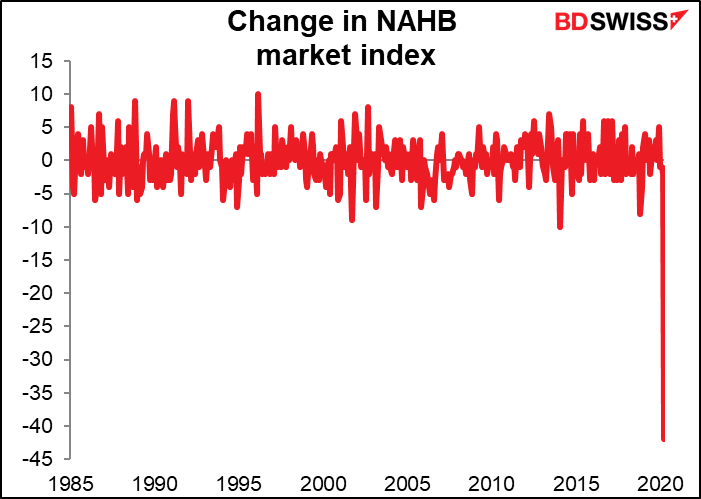 Overnight, the Reserve Bank of Australia will release the minutes of its 5 May Policy Board meeting, but as that meeting was followed by a Statement on Monetary Policy, there’s really little left to learn about their thinking at the moment.

Which brings us then around to what’s really the first Tuesday indicator, except I can’t guarantee I will drag my sorry posterior out of bed early enough and make the arduous commute 10 meters to my desk in time to get this out before the figures are released, so I’m going to write it up now just to be safe.

UK employment data for March is expected to be still a pre-virus figure:  the lockdown didn’t start there until 23 March. Furthermore, Britain announces its employment data as moving averages: the unemployment rate is a three-month moving average, while the change in the number of employed persons is the average of the last three months vs the preceding three months. This may give a better picture of the underlying condition in normal times by eliminating some statistical noise, but it means the data is slow to show the impact of a shock like what we’ve seen.

As a result, the number of persons in employment is forecast to rise, and while the unemployment rate is forecast to go up a bit, it’s not expected to be anything that dramatic. This is in stark contrast with other countries, especially the US, where 24% of the workers who were employed in February have applied for unemployment benefits since 20 March. 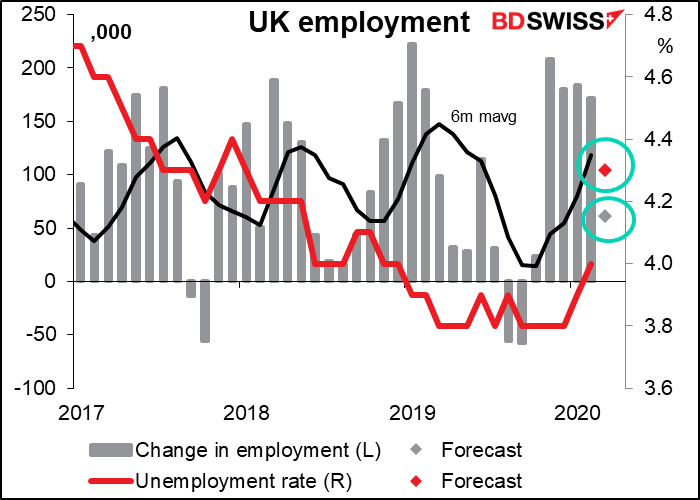 The UK’s employment data is behind most other major countries (except Italy, which is still posting December figures!) It’s likely to catch up over the next few months. As you can see, most of the countries posting April data have shown a bigger increase from the recent lows. 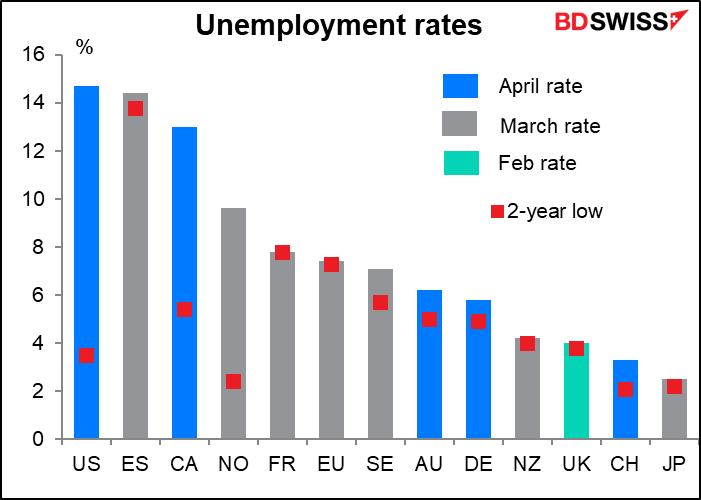 The rise in wages is expected to continue its downtrend, but again, no one really cares about March data that much. 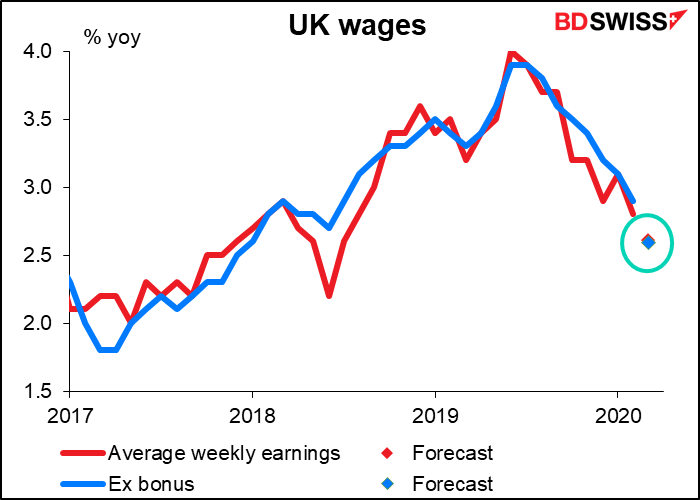 A note to my loyal reader(s):  My apologies for not writing anything last week, I was out sick (nothing virus-related, fortunately!) It reminded me of how precious health is and how fundamental it is to everything else in our lives:  a “necessary but not sufficient” condition for happiness. That is, you may not be happy just because you are healthy, but you will certainly be unhappy if you are not healthy. So if you are healthy, please do everything you can to stay that way in these difficult times, and remember that just because you may now do something that wasn’t allowed before doesn’t mean it’s suddenly risk-free. And appreciate your health, because it is by no means a given. 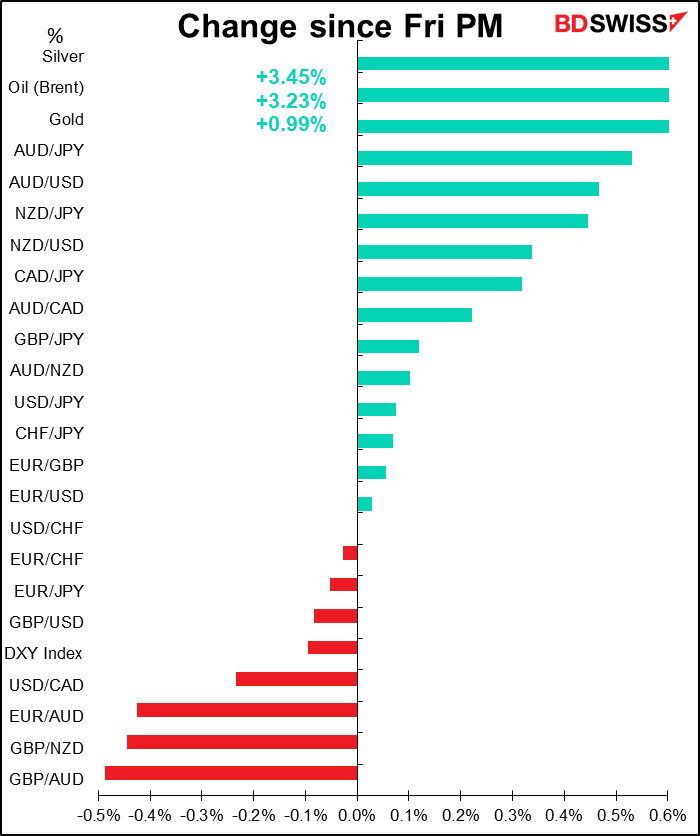