You are at:Home»MARKET PREVIEW»Kiwi Up on RBNZ, CHF Down On…who knows? US New Home Sales, more Powell + Brainard & Clarida 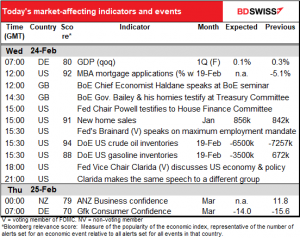 A day with some stunning moves in the FX market.

NZD was the best-performing currency by a whisker after the Reserve Bank of New Zealand (RBNZ) took a more optimistic stance. Although they remain cautious, they upgraded their forecasts, moved their risk assessment to “balanced,” and were more specific about what would get them to begin tightening. The result was that the market has started to price in a possible rise in rates by the end of the year (just slightly).

In November they said that “monetary policy will need to remain stimulatory for a long time to meet the consumer price inflation and employment remit…” This time they were more specific than just “a long time”: they said “The Committee agreed to maintain its current stimulatory monetary settings until it is confident that consumer price inflation will be sustained at the 2 percent per annum target midpoint, and that employment is at or above its maximum sustainable level.” This sets out the criteria for them to end the stimulus.

They did note that “Meeting these requirements will necessitate considerable time and patience,” furthermore they did not take negative rates off the table. But they also upgraded their forecasts significantly – 2020 GDP is now estimated at -2.7% yoy vs -4.0% in November, 2021 forecast +3.7% vs +3.4%, with unemployment now expected to peak at 5.2% vs a 6.4% peak forecast in November and 8.1% peak forecast in August. Unemployment hit 5.3% in Q3 last year and was 4.9% in Q4, so it would appear to have passed its peak already. Given the upgrade to their forecasts and their view on the risks, it appears to me that keeping tools like negative interest rates handy is an insurance policy in case things go wrong, not a plan for the next move. This change should be positive for NZD, in my view.

In the wake of the announcement, the overnight index swap (OIS) market has started to price in a small possibility of a rate hike by the end of the year. This echoed a change to one of the charts in the accompanying Monetary Policy Statement (MPS), which showed a projection for the Official Cash Rate (OCR) to move above 0%, compared to its November MPS, in which the rate stayed negative. 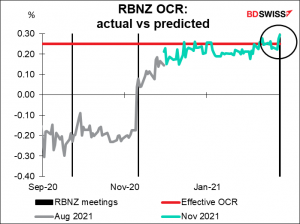 Meanwhile, Fed Chair Powell regaled Senators with his usual schpiel about the need for continued fiscal and monetary support and the importance of a robust labor market. He was slightly more upbeat on the outlook than before, thanks to the progress that’s been made with vaccines. The pace of vaccinations raises “hope for a return to more normal conditions later this year,” he said.

The key point in my view was that he did not push back against the recent rise in bond yields. On the contrary, he said “In a way, it’s a statement of confidence on the part of markets that we will have a robust and ultimately complete recovery.” This was particularly significant since he also dismissed the risk of higher inflation – he said inflationary risks were weighted to “the downside for a long time.” That implies he’s OK with higher real yields – a potential positive for the dollar. Real yields have shot up in the last few days as the rise in yields far outpaces the rise in inflation expectations. 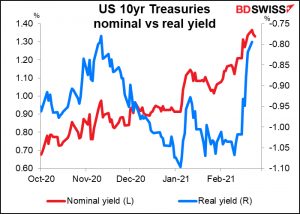 One of the reasons investors had been happy to hold bonds as the prospects for the economy turned up is that they anticipated that the Fed might institute a policy of “yield curve control” (YCC) if yields started to rise notably. Under YCC, a policy adopted by Japan and Australia, the central bank promises to keep the long-term bond yield within a certain range. But if Powell is OK with both nominal and real yields rising, then it appears no YCC is likely. That may spell trouble for the stock market, which has been having a hard time digesting higher rates.

(A side note: some of the question Powell got – for example, one about broadband internet access in rural America – were rather off the subject, prompting one wit on Twitter to comment that “Powell is everybody at a family dinner with that uncle who believes we should go back to the gold standard.”)

At the other end of the ledger, CHF slumped sharply. It’s now the worst-performing currency this year among the G10 currencies, much to my amazement (and delight, since my wife lives there). There are numerous technical explanations about “why now,” but I’d like to point to one fundamental factor likely to weaken CHF and JPY from now: the resumption of carry trades. Carry trades tend to perform well during “risk-on” periods and badly during “risk-off” periods. They’re also pointless when interest rates are the same everywhere. But if interest rates start to diverge, as seems likely from now, then they could become attractive once again. With the lowest interest rates in recorded history, CHF should in theory be an attractive funding currency for carry trades. 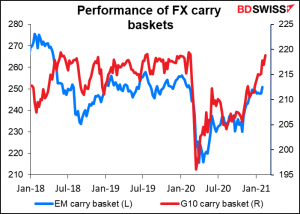 The excitement today, such as it is, is likely to come much more from talktalktalk than from any numbers.

The day starts out with talktalktalk from the Bank of England. BoE Chief Economist Haldane will speak on the changing world of work, wellbeing and management. Certainly the changing world of work that we’ve seen this year, with more people working from home, has the potential to be one of the biggest changes in society since the Industrial Revolution took people out of their homes to work in factories. However, no text is going to be released so I don’t think this will be all that important.

Then BoE Gov. Bailey will testify before Parliament’s Treasury Committee. He’ll be joined by other members of his squad, namely Deputy Governor for Monetary Policy Broadbent and Monetary Policy Committee members Vlieghe and Haskel. Expect the usual drill about negative interest rates and the usual denial that they’re planning on using them, but that they just want them in their “quiver.”

Then Fed Chair Powell will testify again, this time to the House Financial Services Committee. This is normally just a different version of the song that he sang yesterday to the Senate Banking Committee. I would be surprised – shocked, actually – if anything substantial and new came out of it. I don’t see why they do this twice each time except to provide Congress individuals with the opportunity to grandstand for their home audiences on C-Span.

That starts off a round of Fed commentary. Gov. Brainard (V) will be a guest lecturer at a Harvard University Principles of Economics class, speaking on The Federal Reserve’s Maximum Employment Mandate. (Boy, when I was taking intro economics, we didn’t get Fed governors lecturing us – the best we could do was a field trip one night to watch the Fed collect cancelled checks from a bank. I guess this is one of the advantages of going to Harvard.) Gov. Brainard has been making important speeches recently – last week she talked about climate change at the US Climate Finance Summit. She’s the only Democrat among the Fed governors and therefore a good candidate for Fed Chair when Powell’s term expires a year from now.

Finally, Fed Vice Chair Clarida (V) will discuss the US economic outlook and monetary policy at a virtual event hosted by the US Chamber of Commerce, and then three hours later discuss the same topics with the American Chamber of Commerce in Australia. While I don’t expect anything substantially different from what Powell said, it will be interesting to hear what if anything he says about the bond market.

As for the statistics, US new home sales are expected to be up 1.5% mom, vs the +0.6% mom rise in existing home sales that we saw last month. That would be no big surprise and no big impetus for trading. 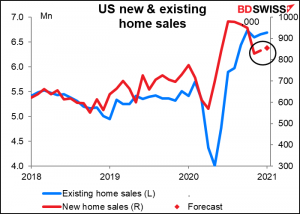 The only other major indicator out today is the weekly US oil inventories. The market was shocked yesterday when the American Petroleum Institute (API) figures showed an increase in crude oil inventories of a little over 1mn barrels, vs the 6.5mn barrel drawdown that had been expected. We’ll have to see what the Dept. of Energy has to say. 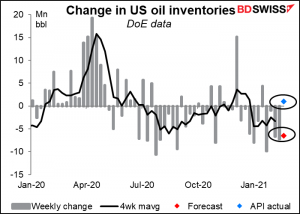 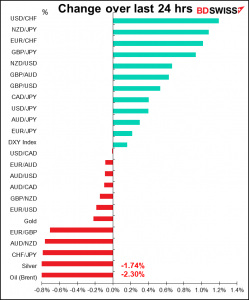