You are at:Home»MARKET PREVIEW»JPY Up on Story of Eventual BoJ tightening; US retail sales, China GDP 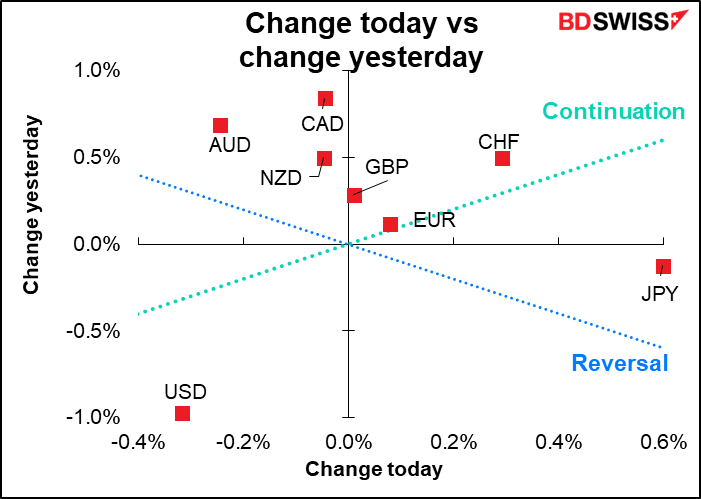 Well! My daughter’s tuition at her university in Kyoto may get a lot more expensive! Reuters ran a story today: Exclusive: BOJ debates messaging on eventual rate hike as inflation perks up.

TOKYO, Jan 14 (Reuters) – Bank of Japan policymakers are debating how soon they can start telegraphing an eventual interest rate hike, which could come even before inflation hits the bank’s 2% target, sources say, emboldened by broadening price rises and a more hawkish Federal Reserve.

The story goes on to say that they’re talking about “well into 2023,” so nothing immediate. But it also quotes a BoJ source as saying “The BOJ needs to pay close attention to what other central banks are doing,” which is normalizing policy all around.

The Reuters story said the BoJ is thinking that it could start raising rates even if hasn’t yet hit its 2% inflation target, which would be a huge turnaround. Most other central banks are already over their 2% targets, which is why they are considering hiking rates.

The change in BoJ thinking comes as producer prices in Japan heat up. The December figure, released this morning, showed the yoy rate of growth slowing but remaining much higher than in recent years – or even recent decades. The rate of growth in the producer price index (PPI), or corporate goods price index as it’s known in Japan, slowed to +8.5% yoy from an upward revised +9.2% yoy in November. Still, that’s quite high given that the national consumer price index is up only +0.6% yoy and excluding food & energy it’s down 1.2% yoy (November), i.e. the country is still in deflation! The question is how long companies will be willing to take the hit to their margins from their input prices being so much higher than their output prices. 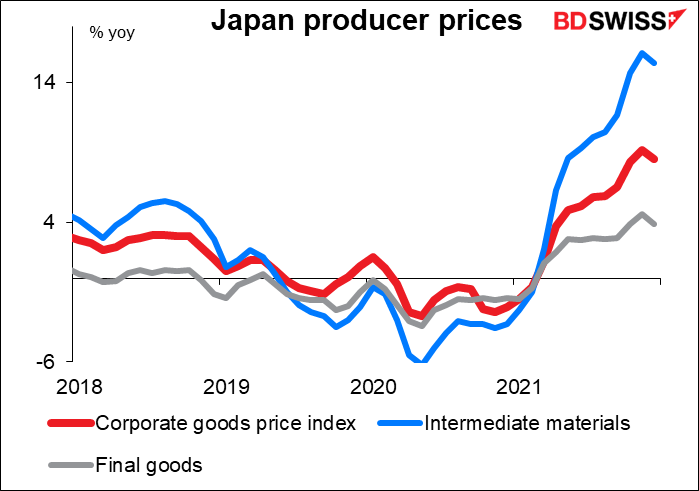 The report makes next Tuesday’s Bank of Japan meeting and Friday’s national CPI much more important than usual.

Oddly enough the continued high rate of growth in Japan’s producer prices was in contrast to yesterday’s US PPI, which came in lower than expected (+0.2% mom vs +0.4% expected, +1.0% previously). 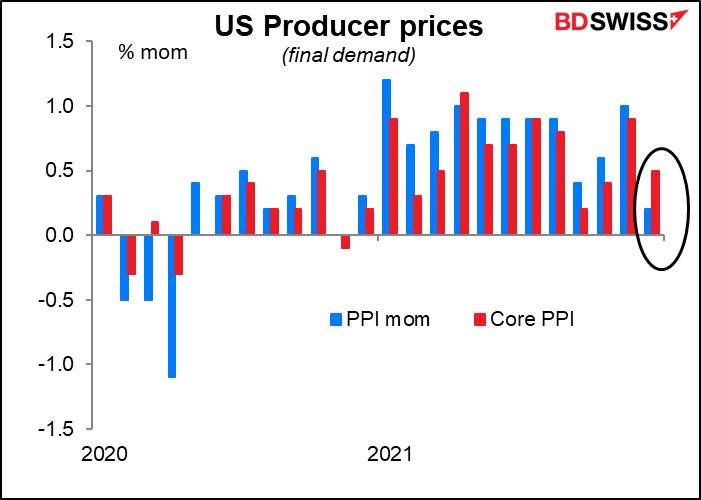 As a result US and other major bond yields fell, while Japanese yields rose – helping to boost JPY.

As a result, market confidence in a March rate hike by the Fed increased. 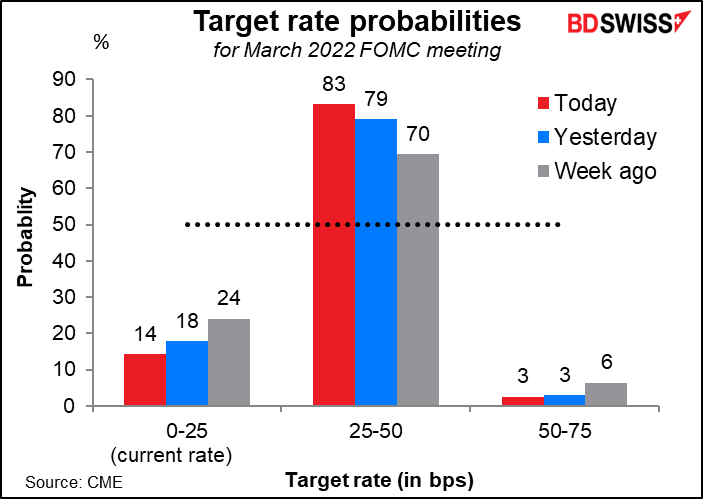 As did the likelihood of four or five rate hikes during the year. 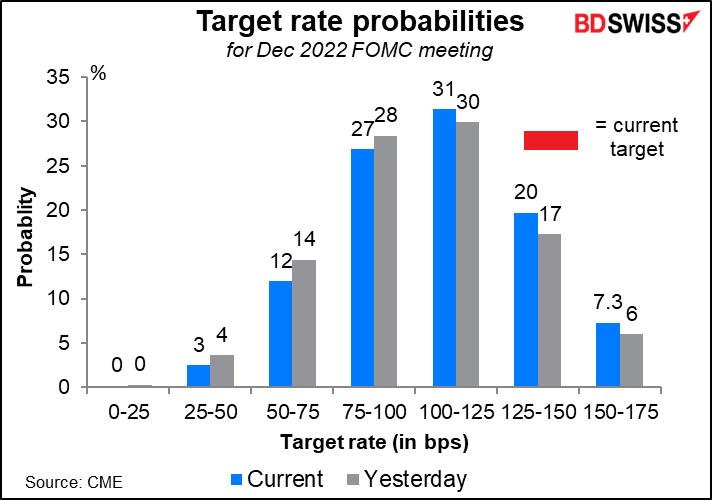 It’s quite apparent though that thoughts of faster tightening and higher rates are no longer supporting the dollar. On the contrary, the dollar was the worst-performing currency of those that I follow.

USD is also not performing as a “safe-haven” currency as stock markets decline. The tech sector sold off further yesterday, with the S&P 500 off 1.4% and the tech-heavy NASDAQ down an even larger 2.5%, lead by the FANG+ index (-3.7%) as many of the favorite tech stocks got hit.

The other real puzzle to me is why GBP is holding up so well when the Prime Minister is facing such pressure to resign. I think it may be for two reasons: 1) as they say in politics, “you can’t be somebody with nobody,” and so far there’s no one who’s emerged as a consensus candidate against Johnson; and 2) maybe the market figures that almost anyone would be better than him anyway. Also today’s UK short-term indicators were much much better than expected (see below), so that’s no doubt helping too (although the two graphs of currency rates were taken before those figures were released.) 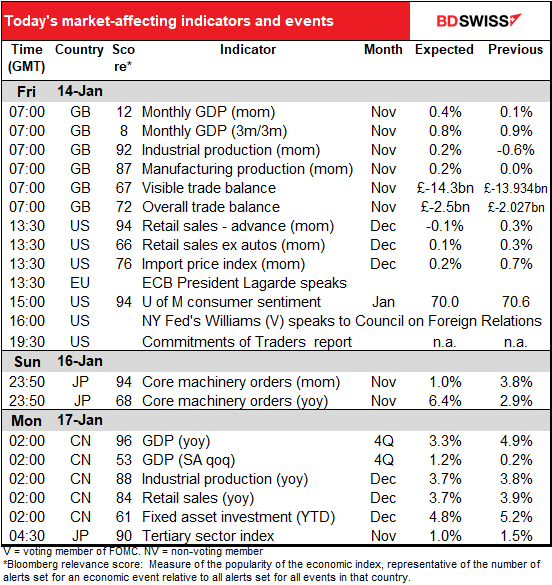 The market consensus is for a small decline from November, which wasn’t such a great month either. It’s not necessarily due to a lack of demand though; the dearth of cars to sell, thanks to the microchip bottlenecks, is weighing on sales somewhat. 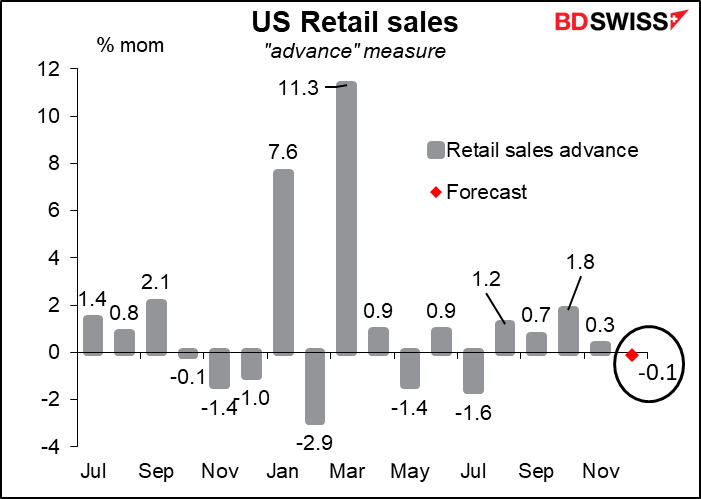 But even excluding autos, the figure isn’t expected to be anything dramatic. Weak data like this could be negative for the dollar, although we’ve seen recently that higher bond yields aren’t necessarily good for the currency, either. 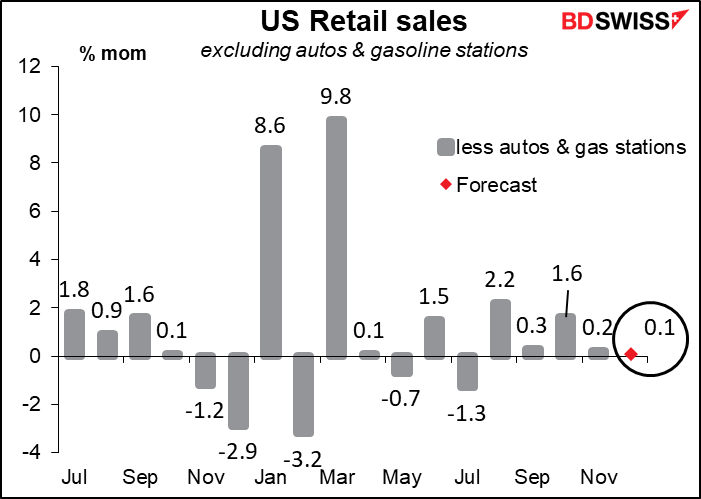 In any case, it could be that US consumers are just all spent out. Compared to other major countries, consumer spending in the US has been much more robust. Perhaps they’ve used up a lot of their savings and have to economize a bit from now. 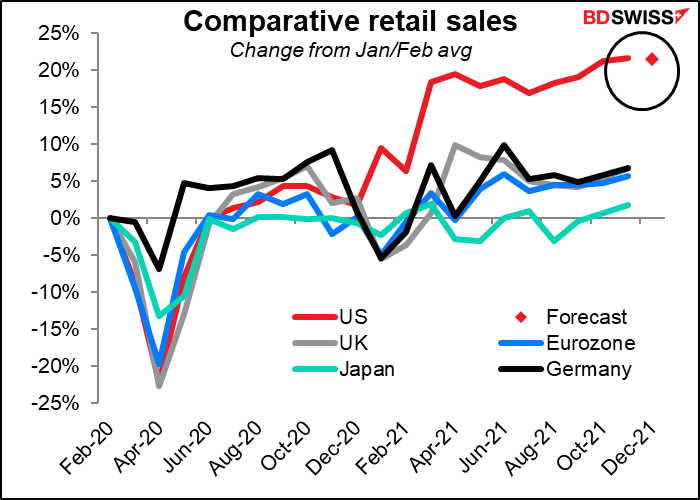 ECB President Lagarde will speak to the Conference of Parliamentary Bodies Specialized in Community Affairs. (By “Community” I think they mean “European Community,” not as in your local town). I can’t find any details about this speech. The question is what she’ll say after last week’s gangbusters 5.0% yoy Eurozone consumer price index (CPI). ECB Chief Economist Lane blamed outrageous energy prices and noted that excluding energy and food, the index was only up 2.6% yoy, and besides, they expect it will slow further. If past performance is anything to go on, Lagarde will echo these thoughts and push back against the market pricing in one rate hike during 2022. 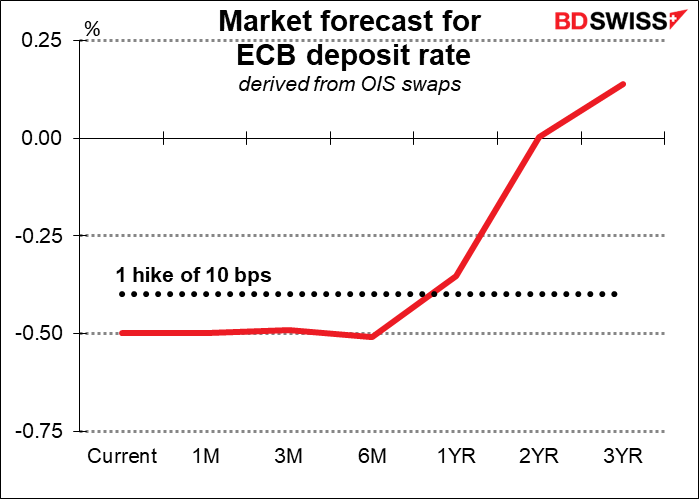 The University of Michigan consumer sentiment index is expected to fall slightly (really, be essentially unchanged). I think that’s pretty good, all things considered. The expectations index is also expected to fall. But neither is expected to fall below their previous low despite the rapid spread of the omicron variant around the US. Perhaps this demonstrates the optimism and resilience of the US. Perhaps it shows that most people don’t know what ‘s going on in the country. In any case, this relatively good outturn could help to offset some of the impact of the weak retail sales figure. 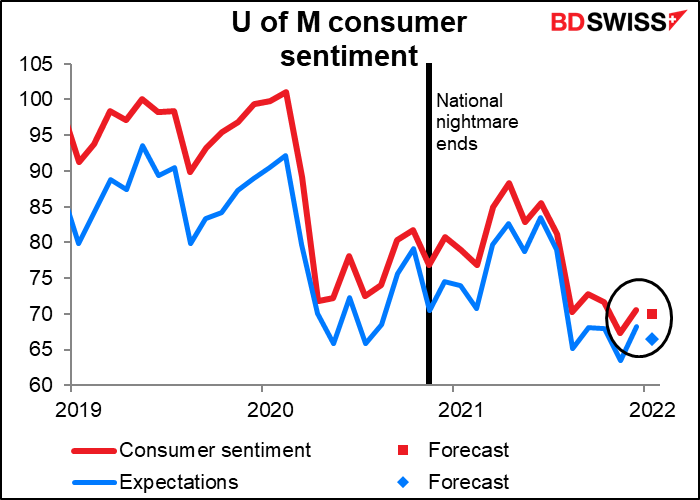 The one-year inflation forecast is expected to be unchanged at 4.8%. That would be good news in that it would show inflation expectations are steady and not becoming “unanchored,” a possibility that strikes terror in the hearts of central bankers. 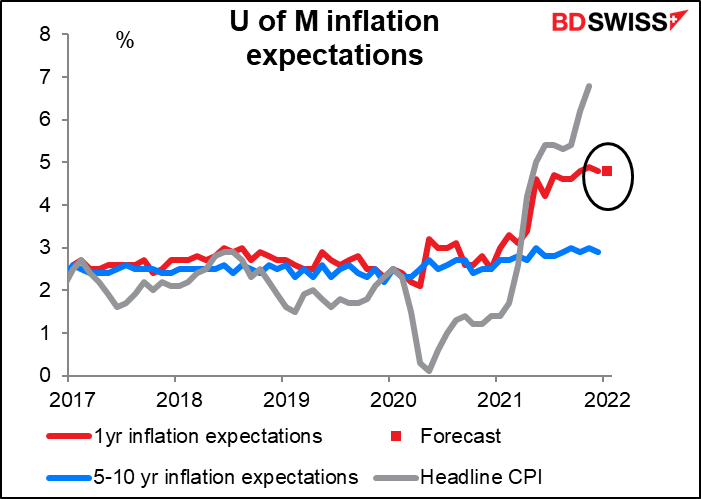 NY Fed President Williams’ speech will be closely watched, for two reasons. One, after this the Fed enters its “purdah” period ahead of the Jan. 26 FOMC meeting and so this is the last we’ll hear from any Fed official about policy until then. Secondly, he’s in charge of the operations desk in New York and therefore the guy who will be responsible for managing their balance sheet when they decide to start reducing it. Everyone will want to hear whatever he has to say on that timely topic.

The market forecast of +3.6% yoy growth is below Bloomberg’s estimate of 4.9% yoy or November. But then again there were some lockdowns here and there in December so it’s still possible. 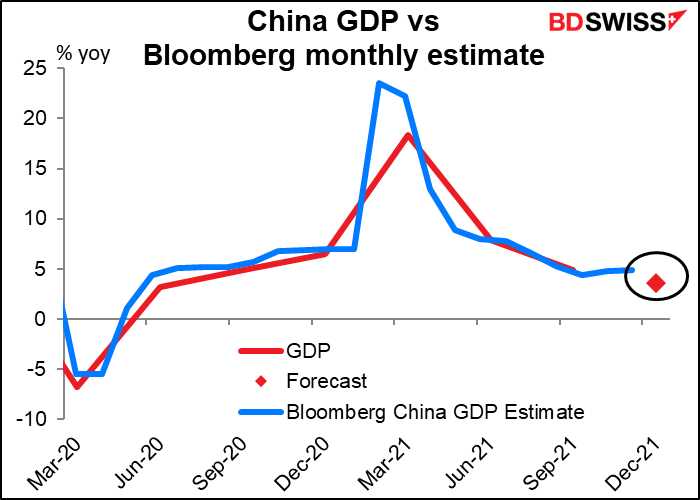 On a qoq basis, China is expected to expand 1.2%. Next year is forecast to be a little higher (1.3%-1.5%). That could be positive for AUD if today’s figure signals that the worst is over for China. 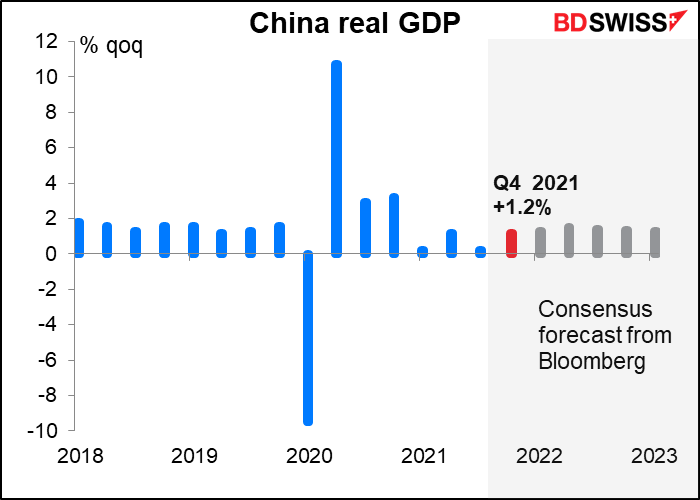 China is way ahead of other countries in its recovery, according to the official statistics. 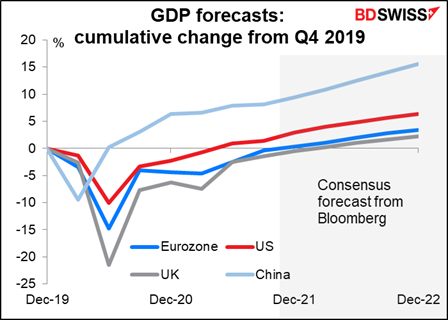 As for the other three, their growth rates are all expected to slow slightly but remain within the recent trend. 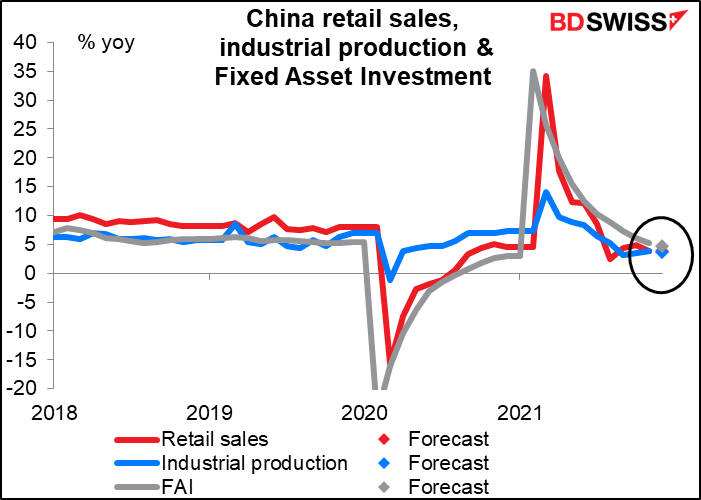 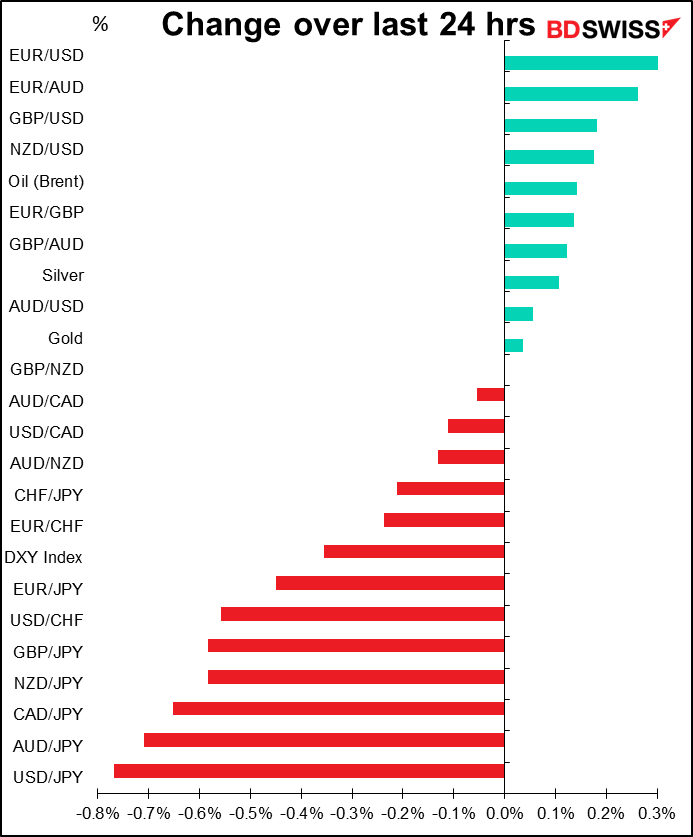