You are at:Home»MARKET PREVIEW»JPY Up, commodity Currencies (& USD) Down on growth Fears; Ifo index 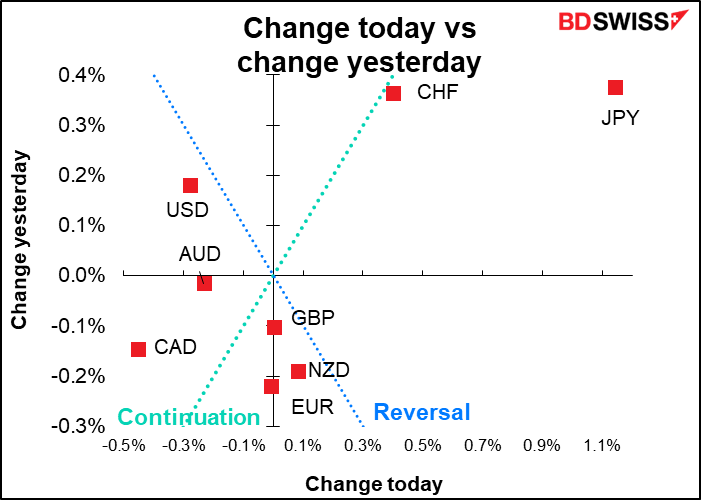 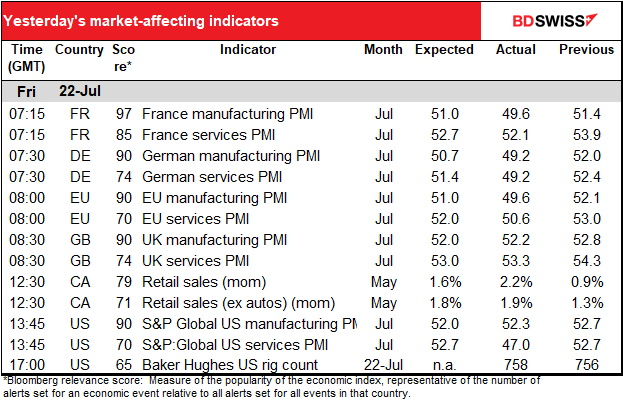 The purchasing managers’ indices (PMIs) are in the above table, but it’s easier to see what happened with this table. The key point: the composite PMIs fell below the 50 line for Germany and the Eurozone as a whole as well as for the US. Furthermore Japan is almost there, too. The global deceleration is proceeding faster than people had imagined. The UK though is an exception; although both manufacturing and services declined, they declined less than expected. 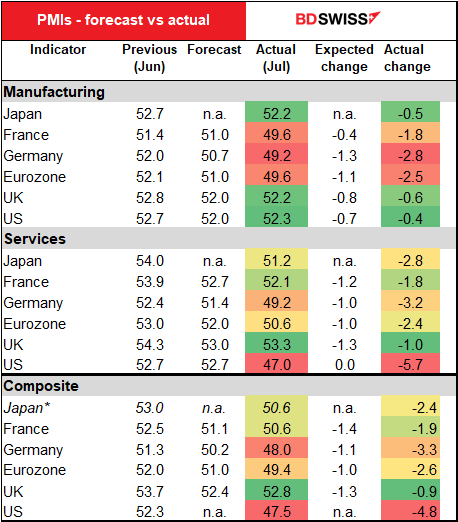 Against the background of weakening economic growth, bond yields declined across the globe. Even in Japan, where they’re already lower than anywhere else. 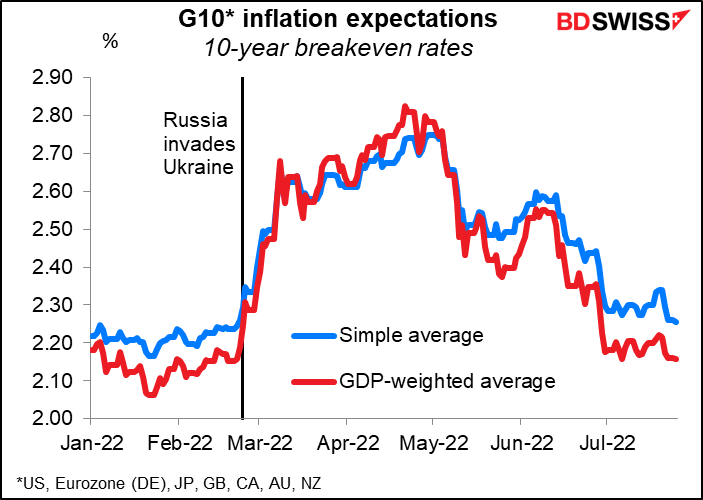 With global growth slowing, the old “monetary policy convergence” theme came back into play, except this time it was concern that monetary policy would converge to the Bank of Japan’s stance, not the Fed’s. 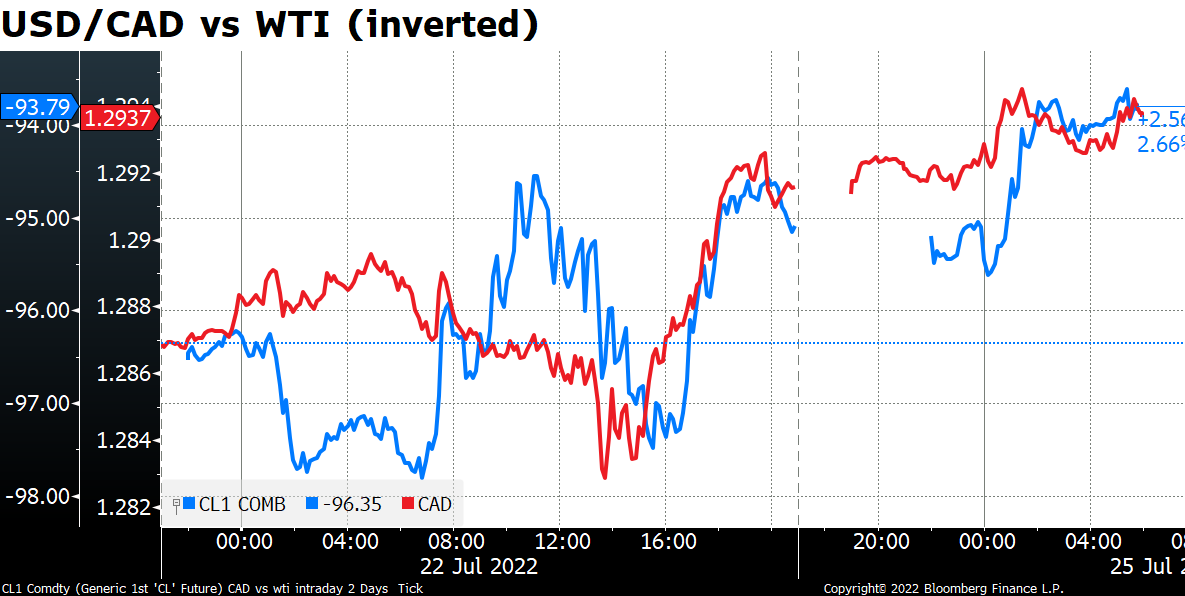 …but it seemed more like CAD was just following risk sentiment. 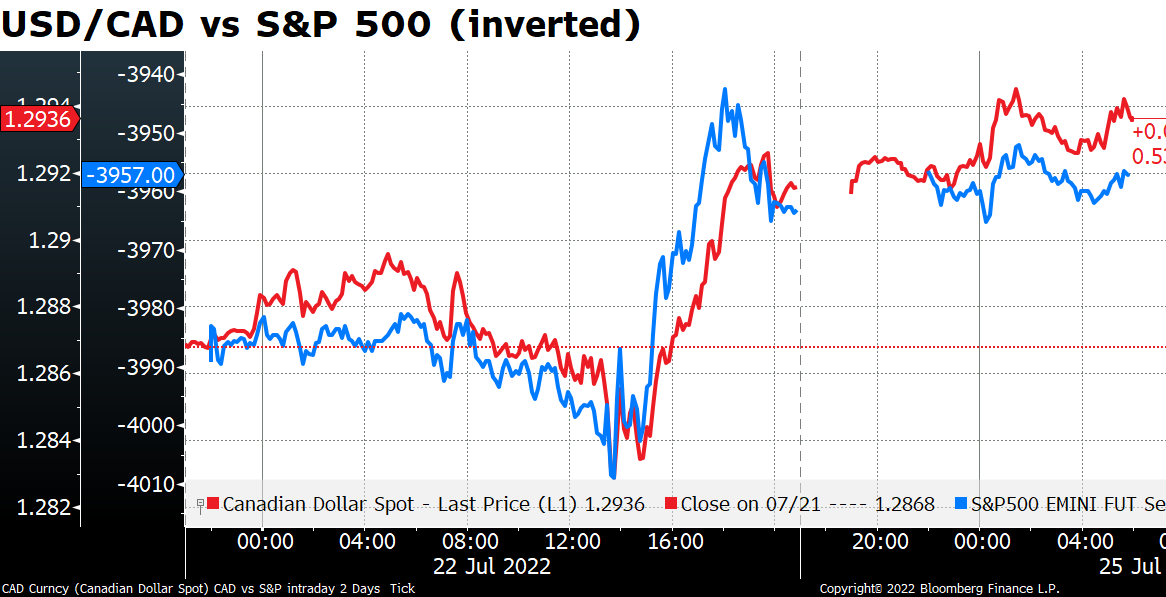 …as did AUD, but just not as much.

In the US, fed funds rate expectations came down sharply, explaining the weakness in USD. The key to the dollar’s course is whether Wednesday’s meeting of the rate-setting Federal Open Market Committee will change this outlook. I assume Fed Chair Powell will repeat his usual mantra that the Fed will do “whatever it takes,” or words to that effect, to get inflation down, but whether that will be enough to reverse sentiment is another matter. The combination of weak sentiment, rising jobless claims, and now a composite PMI in contractionary territory will suggest to many people that the US is already approaching recession, even if Thursday’s Q2 US GDP is expected to show a modest expansion. 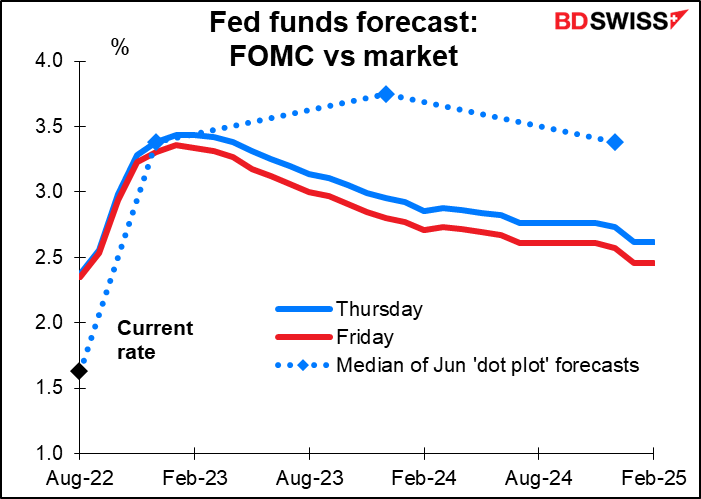 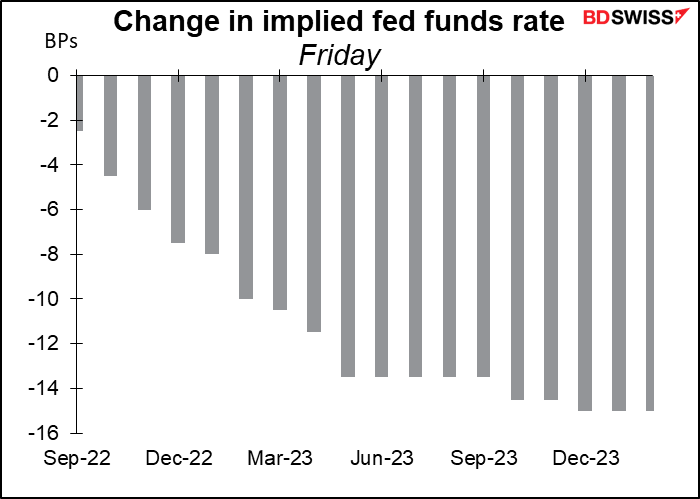 Speculators greatly increased their EUR shorts in the latest week, as well as MXN and CHF shorts. This led to an increase in their overall USD long position. On the other hand they trimmed their CAD, GBP, and JPY shorts a bit but nothing significant. 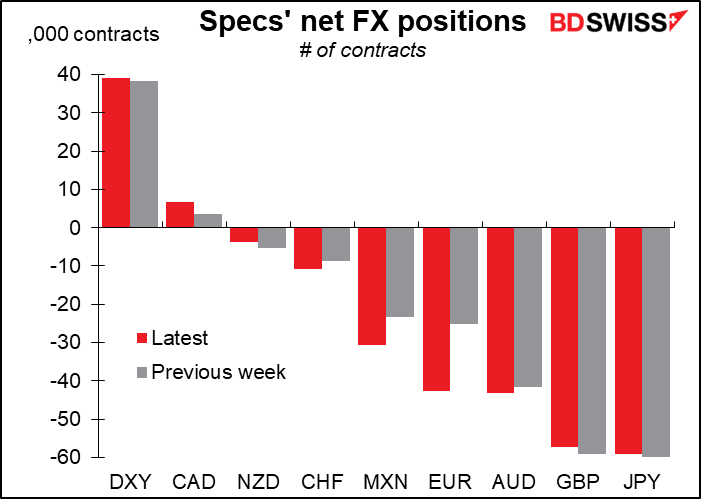 Aggregating it all though they’ve still got a lot more room to run here. 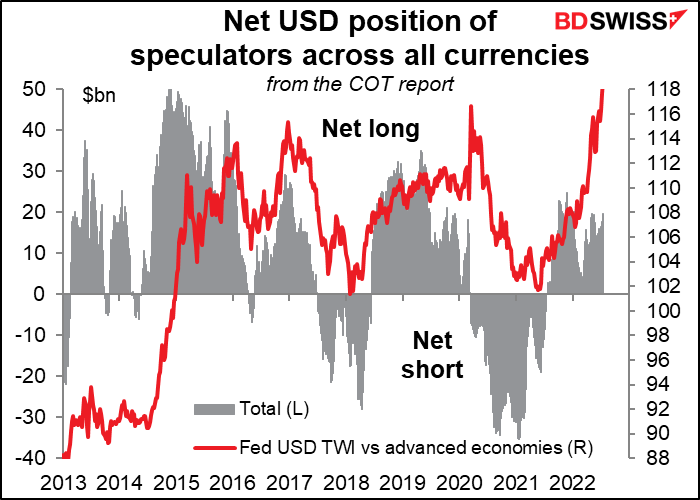 Hedge funds were big sellers of EUR. They also increased their short CAD positions and went slightly short CHF while trimming their long MXN. On the other hand they cut their short JPY and added to their GBP longs. 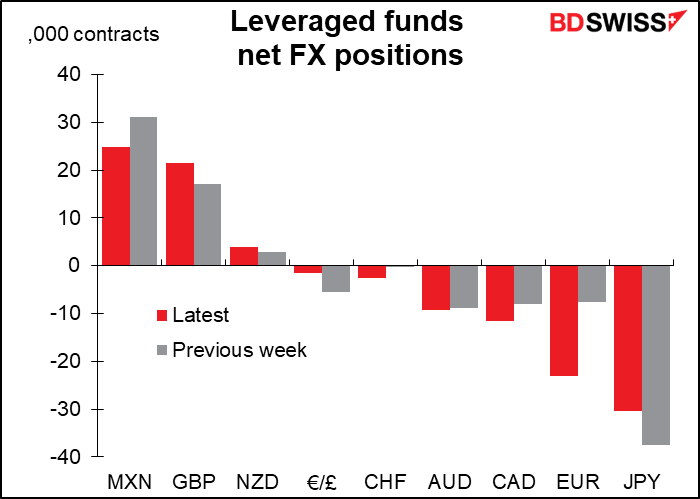 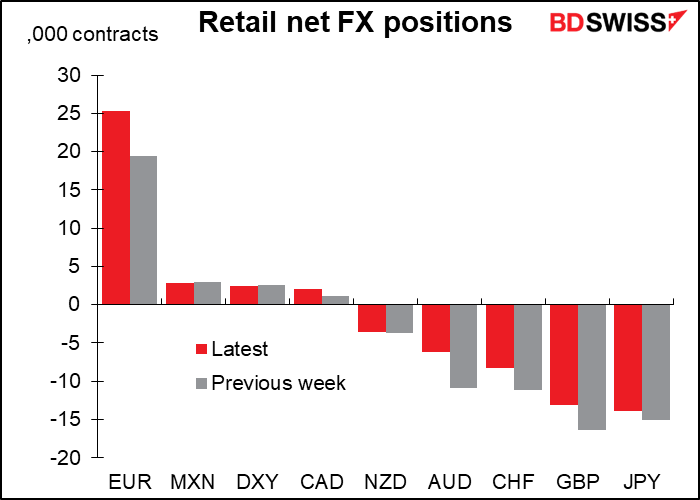 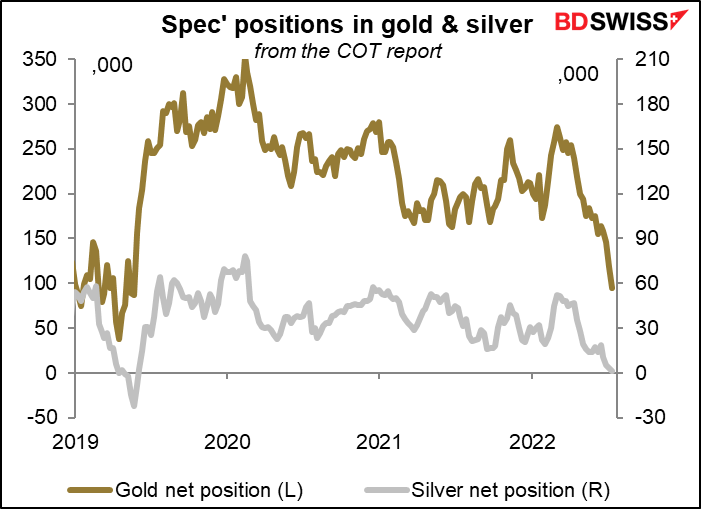 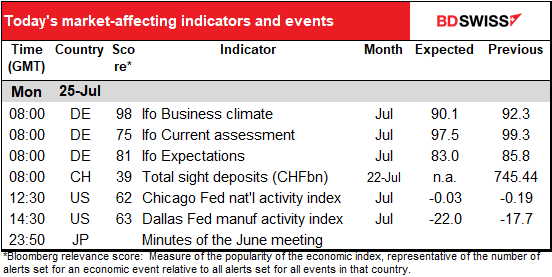 A fairly quiet day insofar as indicators are concerned.

Today’s Ifo business climate index is expected to show a further deterioration in sentiment in Germany. 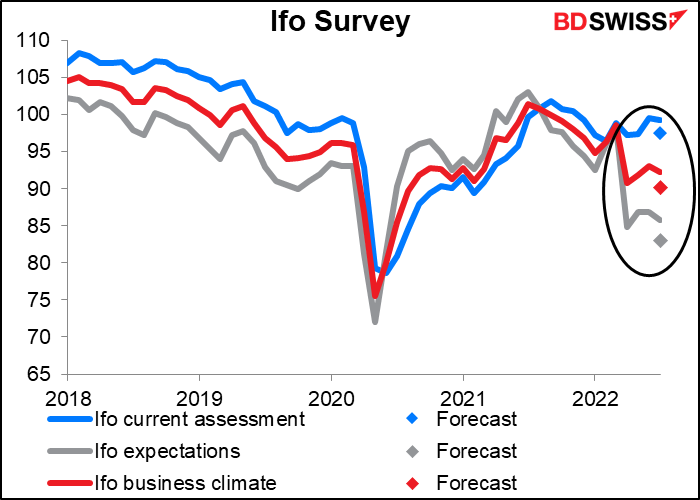 What’s particularly noticeable is that the “expectations” index is forecast to fall by more than the “current assessment” index. The spread between the two is expected to widen to -14.5 points – the widest since the survey began in 2005. That’s very pessimistic. Nonetheless with both the German manufacturing and service-sector PMIs in contractionary territory, it may be realistic. That’s negative for the euro. 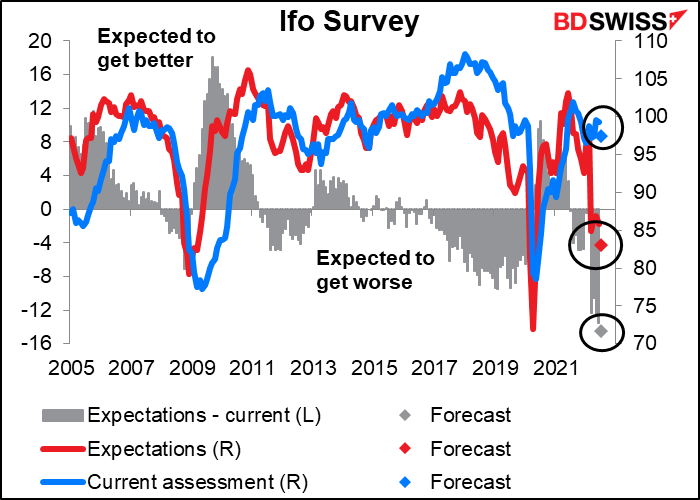 As for the weekly Swiss sight deposits, last week they rose a tiny bit. They’ve fallen for six out of the last eight weeks. Perhaps with EUR/CHF trading below parity (0.9832 at the time of writing) the Swiss National Bank has decided to stop kicking the pair down the stairs? 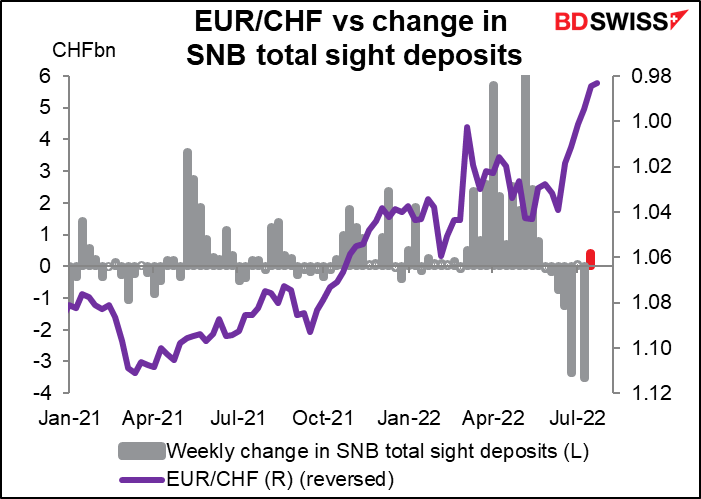 Overnight we get the minutes of the Bank of Japan’s June Policy Board meeting. Normally the BoJ minutes are of little interest since the Policy Board never does anything anyway, but this time around it’ll be interesting to read exactly why they decided not to do anything. Ahead of this meeting there was intense speculation that they would change their yield curve control (YCC) program and free up the 10-year bond yield to rise in order to narrow the yield gap with other countries, but they didn’t do any such thing. 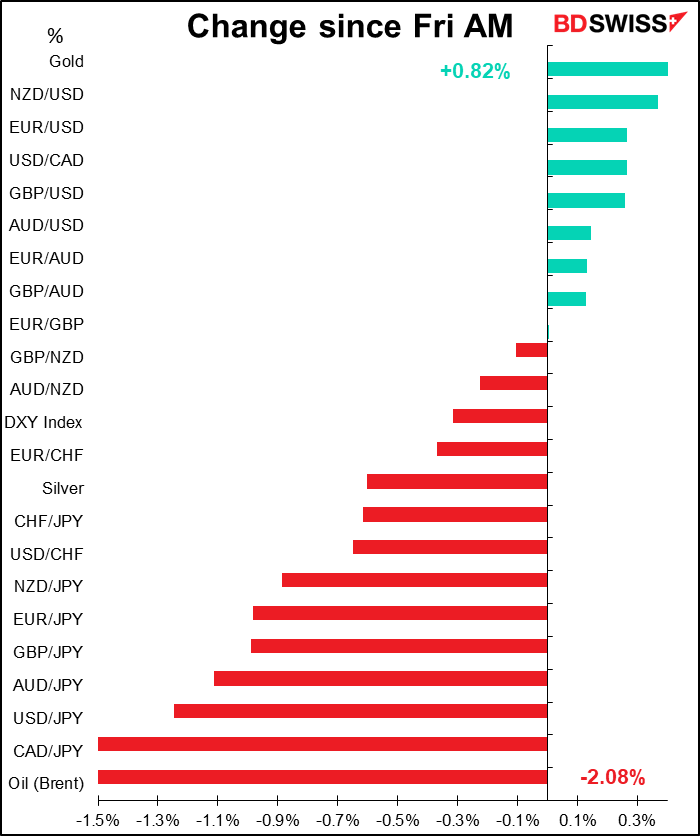 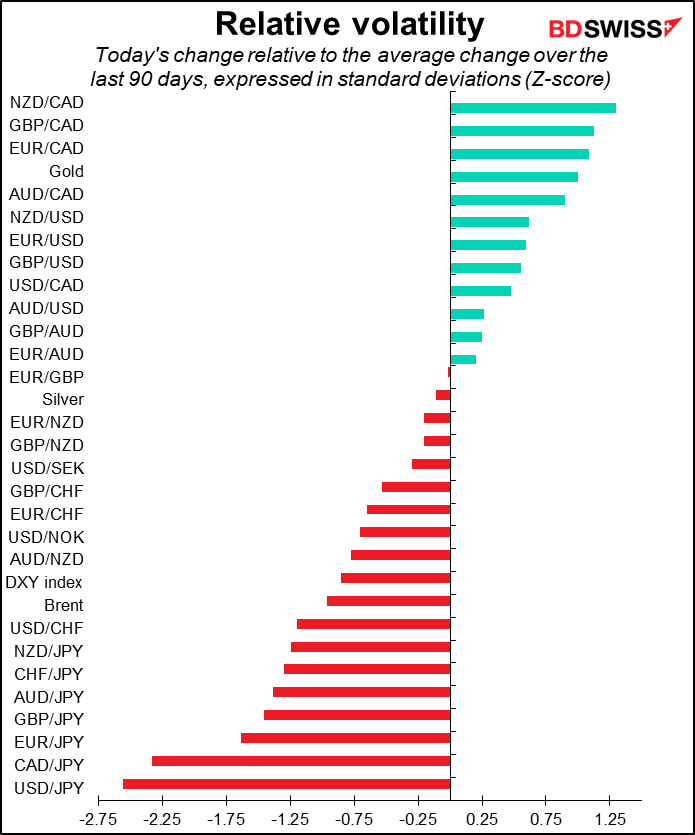