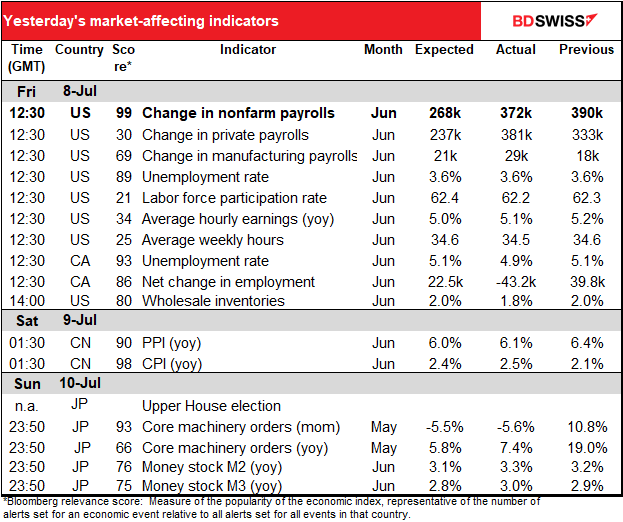 JPY is clearly the dominant story this morning. The currency plunged on news that Japan’s ruling coalition – the so-called Liberal Democratic Party (LDP) and its pals in Komeito – expanded its majority in the Upper House election on Sunday. They won 76 seats, well above the 56 they needed to retain their majority and 69 seats they needed to expand it.

The results will bolster PM Kishida’s grip over the LDP and perhaps allow him to go the full three years without facing another national election. That will include finding a replacement for Bank of Japan Gov. Kuroda, whose term expires next April. PM Kishida is a big proponent of the current extraordinarily easy monetary policy, therefore his increased control over the party makes it more likely that he’ll be able to appoint a successor to Gov. Kuroda with the same priorities. 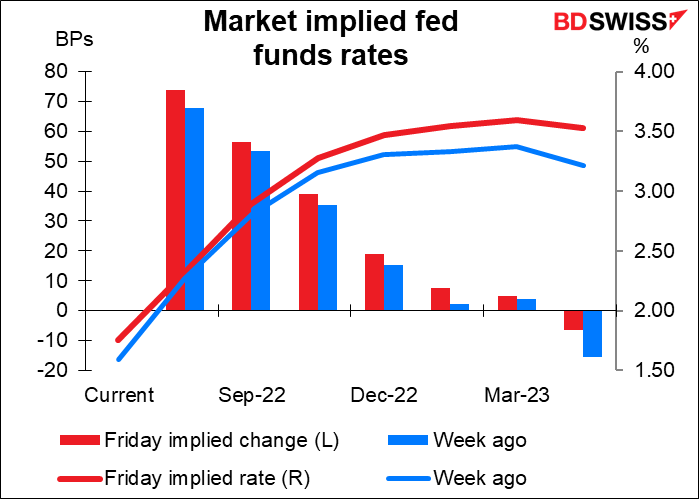 That makes a widening US-Japan rate spread more likely, which is negative for JPY (= higher USD/JPY). 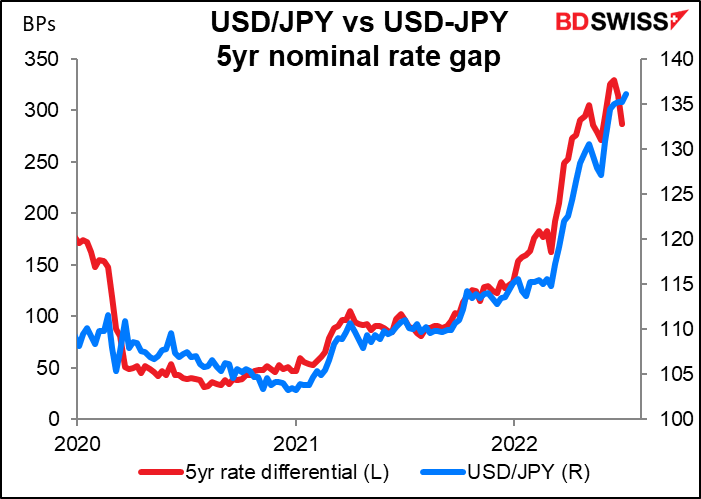 On the surface, Friday’s US nonfarm payrolls (NFP) were phenomenal. The number of new jobs rose by 372k, far more than expected (in the 92nd percentile of all NFPs going back to 1950). The unemployment rate stayed at 3.6%, near the 50-year low of 3.5%. Growth in average earnings slowed a bit but remains high (although below the rate of inflation, naturally).

Nonetheless there were some weak points. While the number of new jobs beat expectations, the number in the previous two months was revised down by 74k. More importantly, the participation rate fell – meaning that the reason why the unemployment rate stayed so low is that 350k people left the workforce, i.e. the number of people working or actively looking for a job shrank. The employment-to-population ratio fell for both men and women. It seems the “great resignation” people aren’t coming back. (One word of caution: many of the people leaving employment were government employees in health care – the drop may reflect reduced funding for COVID-19 testing and other virus-related services.) 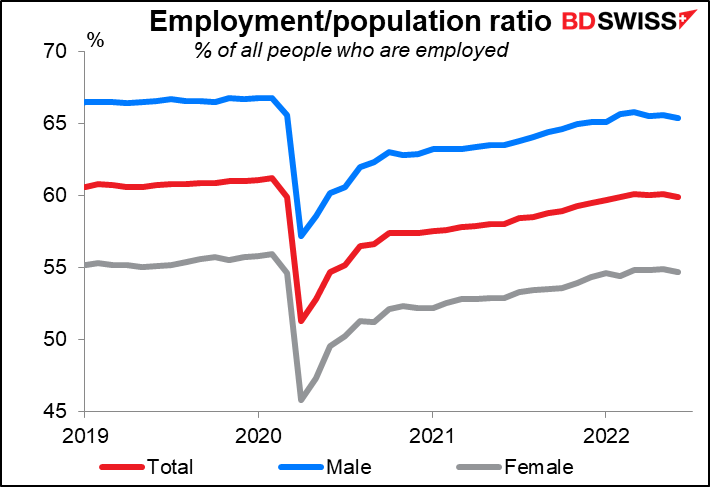 From our point of view, the important point is that the metrics that the Fed follows for determining inflationary pressures all worsened (i.e., became more inflationary):

One more point that’s usually glossed over: the average workweek decreased by 1 tick to 34.5 hours. That’s more important for the strength of the consumption-driven US economy than the number of new jobs, because there are so many more employed people than unemployed people. With 164.023mn people in the labor force and an average hourly wage of $29.81 (Dec 2020, so probably higher now), that small decline in the workweek means a drop of $489mn a week in income. That’s what 475,429 people would make in a week, which is more than what the 372k people who got new jobs will earn. So the total amount that the US labor force can spend fell.

One more tick down and the average workweek will be back to where it was before the pandemic hit, meaning employment has almost caught up with economic output. That could be the signal for slower job growth. 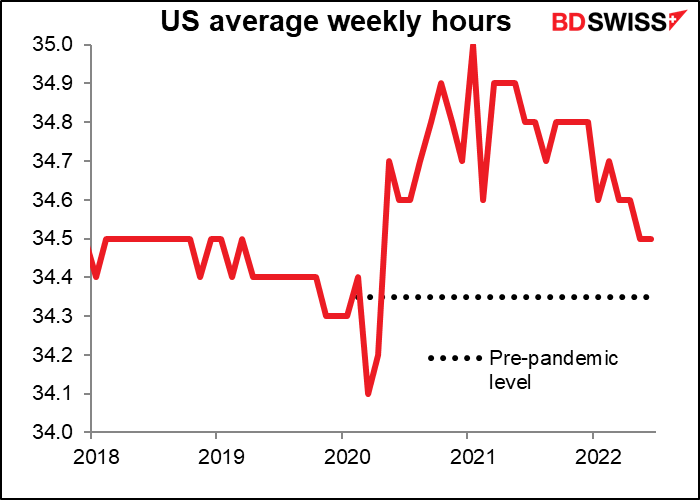 There are now 10 people running for Prime Minister of the UK. The leader of the pack, Defence Secretary Ben Wallace, has said he won’t stand for election. That leaves former Chancellor of the Exchequer Rishi Sunak as the front runner. 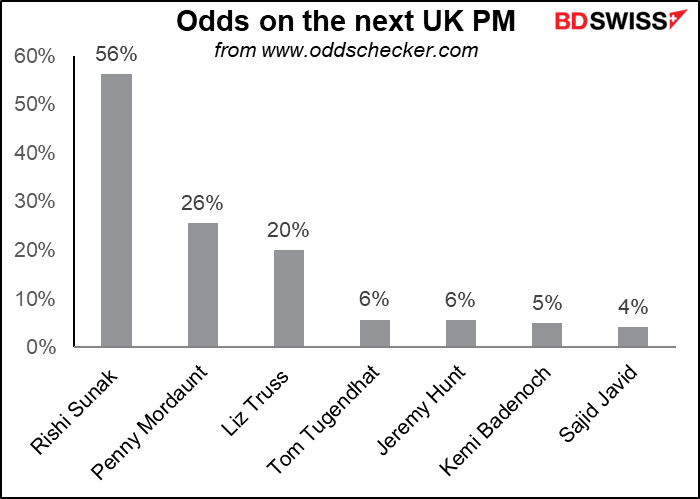 According to the FT, party leaders will meet today to decide the process to elect the next leader. One key provision is the threshold for candidates to make it onto the ballot paper. The FT quoted “one senior MP” as saying it was “likely” that MPs will demand candidates must secure the support of at least 10% of the parliamentary party, i.e. 36 MPs, to get on to the ballot paper. Another senior MP suggested the threshold may be 20 MPs. The requirement to have such a high number of supporters would immediately knock out lesser-known candidates. The goal apparently is to rapidly thin out the field of candidates to minimize the bitterness between rivals  In the last Tory leadership contest, held in 2019, candidates needed the support of just eight MPs to be on the ballot. 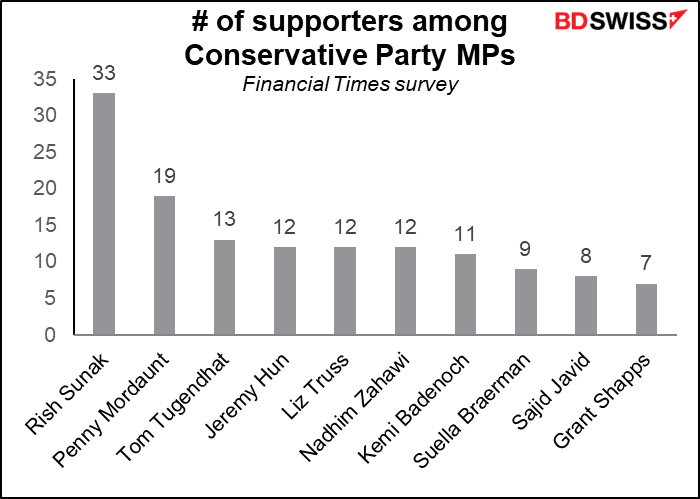 The FT said that nominations are expected to open on Tuesday, with the first round of voting taking place on Wednesday and a shortlist of two set to be finalized before parliament goes into summer recess on July 21. The new prime minister will take office before the House of Commons returns on Sep. 5, in time for the Autumn budget.

Several of the candidates have made cutting taxes the centerpiece of their campaigns. This is in contrast to Sunak, who describes their plans as “comforting fairy tales.” He was planning on raising the corporate tax rate next April. His opponents are accusing him of having a “big tax and big spend” agenda.

Oddly enough they also trimmed their long position in the DXY index, which was their only reduction in net USD. 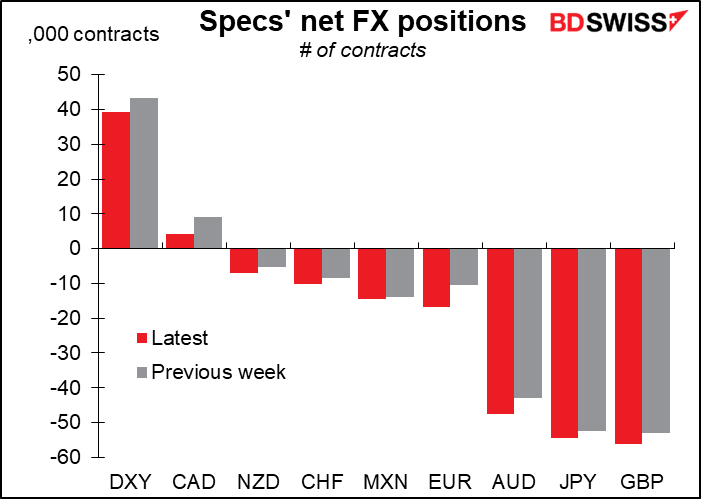 Hedge funds were mixed. They increased their short CHF, EUR, and AUD positions but trimmed their short JPY and CAD. They reduced their long GBP (I’m surprised that they’re long at all, but that’s just me) while increasing their long MXN. 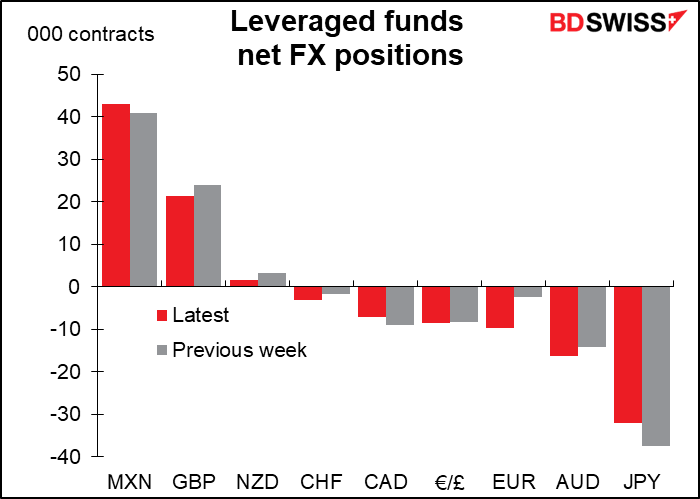 Retail investors were also mixed. They increased their short AUD, GBP, and (slightly) CHF positions but trimmed their short JPY. They also cut their long EUR, MXN, and again, DXY. 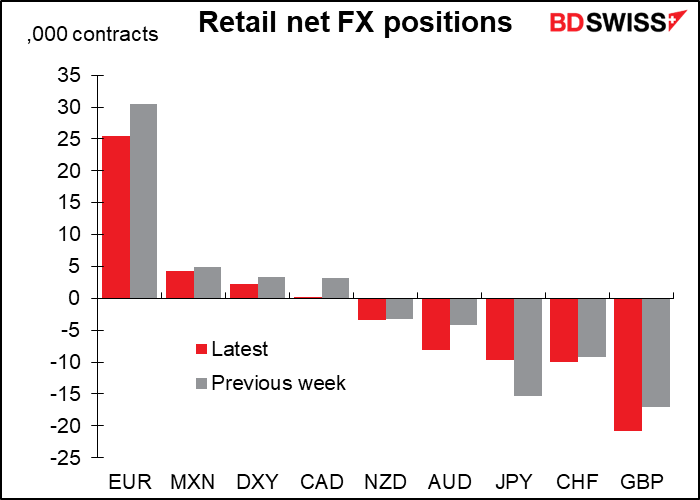 Precious metals: Speculators decreased their long gold position and sharply reduced their long silver position to only 5.1k contracts, the lowest in about three years. 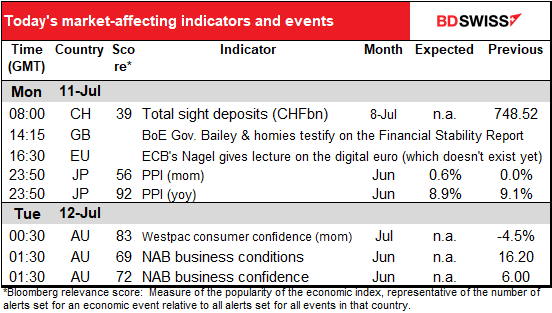 As usual we start the week with Swiss sight deposits. They finally stopped falling last week after EUR/USD slipped below the magic 1.0 level. Is that the Swiss National Bank’s new line-in-the-raclette? Tune in to find out! 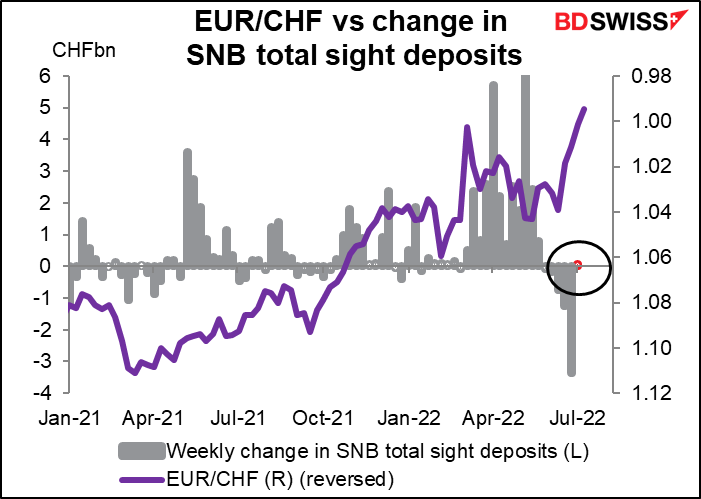 What’s unusual about this Monday is that although we start with the Swiss sight deposits, we largely end there, too. Aside from a visit to Parliament by Bank of England Gov. Bailey and several of his colleagues, who will testify about the Financial Stability Report, that’s about it. 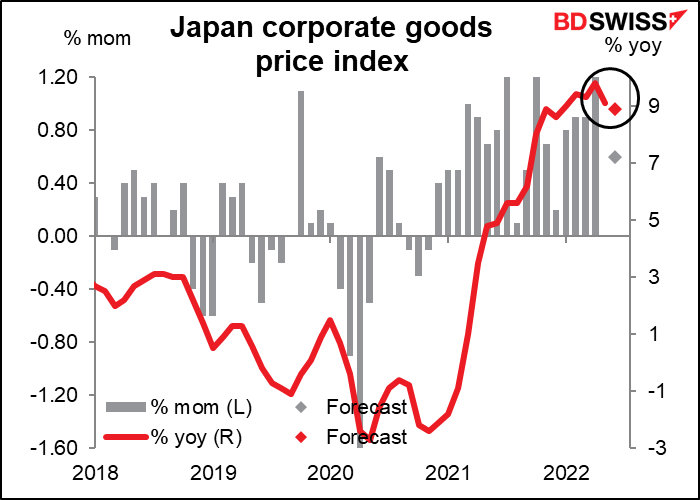 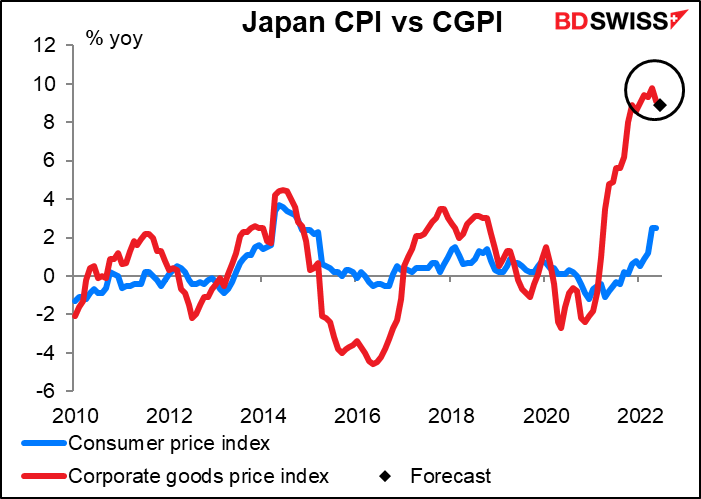 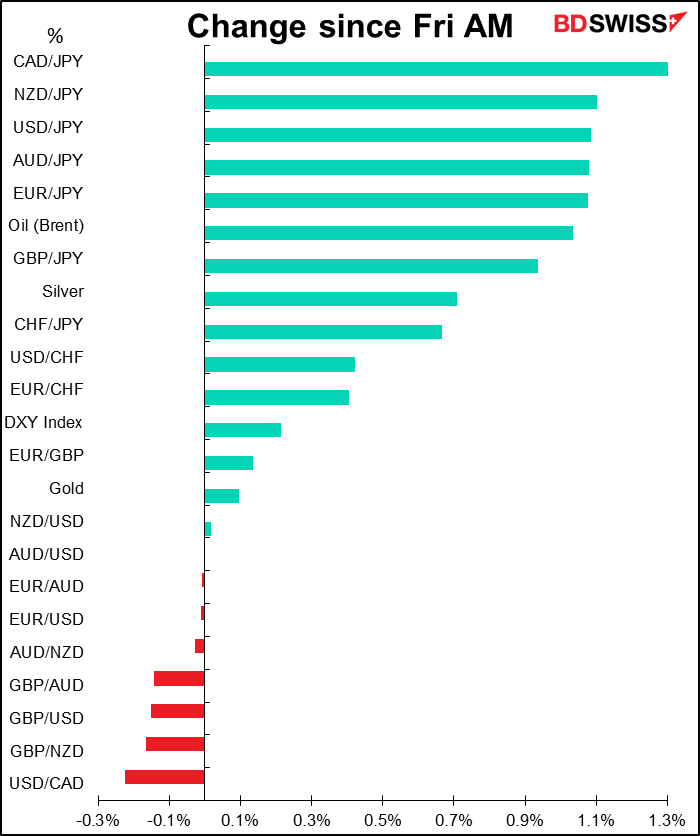 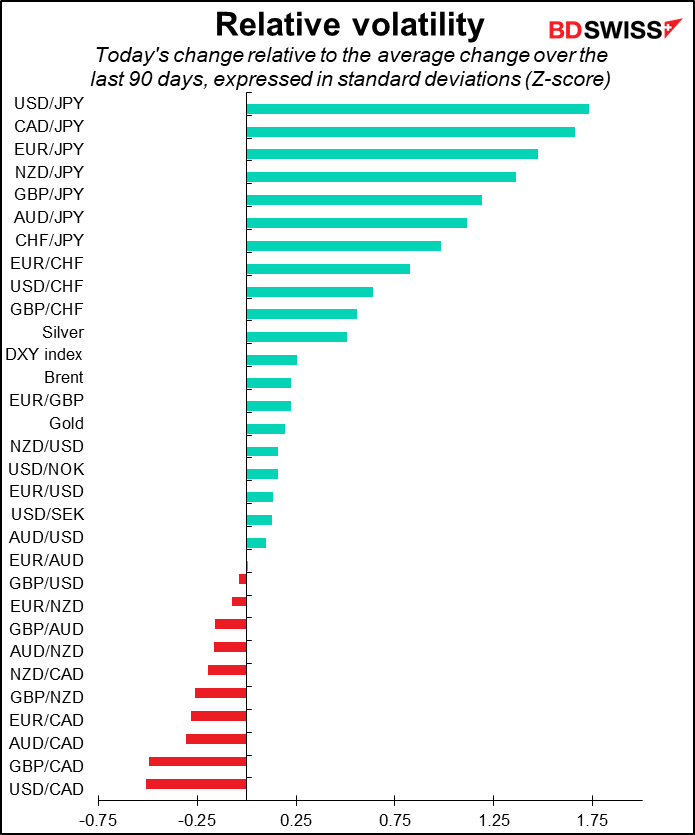