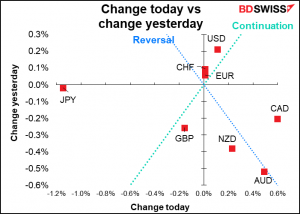 JPY keeps sinking (USD/JPY keeps moving higher)! Verbal intervention from Bank of Japan Gov. Kuroda and Japan Finance Minister Suzuki temporarily reversed the move during Tokyo time but the pair recovered during the New York session and has since moved higher to trade over ¥128 for the first time in 20 years (May 14, 2002).

In response to questions in Parliament, Gov. Kuroda said, “Recent yen moves have been very rapid. That can cause trouble for companies when they make their business plans and we will need to take into account negative factors like these.” He stressed the need to “closely watch” recent yen depreciation, which is often a code word for “get ready to intervene.” Finance Minister Suzuki also weighed in during the same parliamentary session as he reiterated his view that excessive and disorderly swings in the currency a “not desirable.” He didn’t make any comments about intervention (not that he would have anyway).

JPY temporarily recovered (USD/JPY moved lower) on the comments, but the impact gradually wore off.

In the past, the Ministry of Finance (operating through the Bank of Japan) has intervened to buy JPY (i.e. to strengthen the currency) when USD/JPY was as low as ¥121. Its major JPY-buying operation was in April 1998 at ¥128, which suggests that they could be getting ready for another bout of intervention. 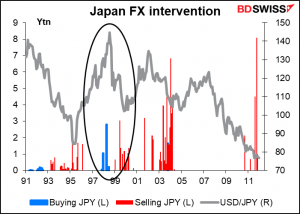 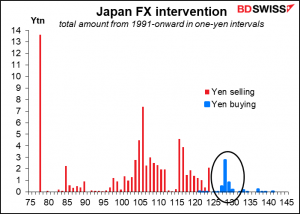 But of course this is using the nominal value of the yen against the dollar, not the real value. Since then Japan’s inflation has averaged 0.10% a year while that of the US has averaged 2.2%. That means on average the nominal level of USD/JPY should have fallen (JPY strengthened) by 2.1% a year to keep the real rate steady. At that pace, the equivalent USD/JPY nominal rate would now be around ¥77!

You can see the difference by looking at this graph. The yen’s nominal effective exchange rate (NEER), which is its value against the currencies of the country’s main trading partners, is still about 6% above its level in January 1998. However its real effective exchange rate (REER), which is the same number adjusted for the inflation differentials between countries, is about 40% below that level. 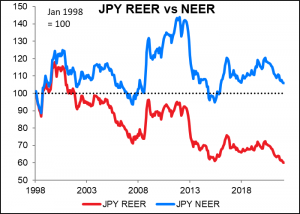 It’s particularly worrisome for Japan that despite this massive increase in its competitiveness, the country now has a structural trade deficit (see comments below with regards to Japan’s trade data coming out overnight). One might therefore think that the authorities wouldn’t mind an even weaker yen, but nowadays they are starting to get concerned about the politics of inflation and record-high increases in the price of imported raw materials, particularly energy. 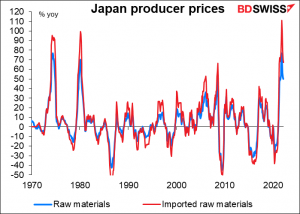 One thing possibly weighing on the yen is the lockdown in China. Nomura estimates that some 373mn people in 45 cities are now either partially or fully locked down. This accounts for some 40% of China’s GDP. The 3.5% yoy fall in Chinese retail sales in April suggests further economic difficulties ahead for Japan, which sends a considerable percentage of its exports to China. 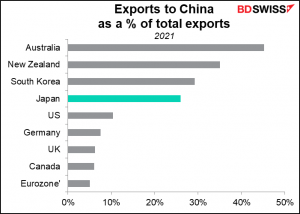 Today’s movement in CAD on the other hand is fairly easy to explain – it went back to being a commodity currency and rallied along with oil. The rise in oil prices was due largely to news about shutdowns in Libya. One of their main fields, which produces 300k barrels of oil a day (b/d)  was shut down after protesters gathered there to demand that the PM quit. The country’s total production has fallen by more than 500k b/d or about half in a few days.

The RBA minutes overnight showed that the RBA expects inflation to pick up further and therefore the time is approaching to join the global rate hiking cycle. “Inflation had picked up and a further increase was expected, with measures of underlying inflation in the March quarter expected to be above 3 per cent,” the minutes noted. “Wages growth had also picked up..” but remains below what’s necessary to get inflation sustainably to the target level. Nonetheless, “These developments have brought forward the likely timing of the first increase in interest rates,” they said. 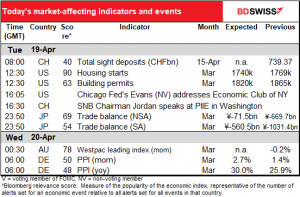 The day starts out with Swiss sight deposits, which weren’t released on Monday because of the Easter holiday. The Swiss National Bank (SNB) is doing more intervention than it was back in January, but still not really hold-the-line style intervention, just smooth-the-decline style. Did that change last week, which might be why EUR/CHF didn’t fall any further?

Later in the day we’ll hear from SNB President Jordan, who will be making a presentation at the Peterson Institute for International Economics and its “Macro Week,” held in conjunction with the IMF/World Bank Spring Meeting. You can watch President Jordan’s speech here if you’re interested. I doubt if he’ll say anything particularly exciting though. At the SNB’s last meeting (March 24th) they just repeated their usual boilerplate statement that they are “willing to intervene in the foreign exchange market as necessary, in order to counter upward pressure on the Swiss franc,” etc etc. 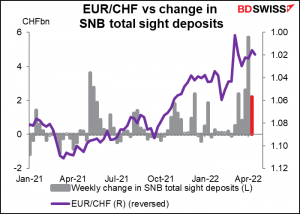 US housing starts are expected to be down 1.6% mom and building permits down 1.9% mom. That would be a relatively modest decline given the 60 bps rise in the average mortgage rate during the month to 4.9% from 4.3%. The market is keen to see how higher rates impact the housing sector. 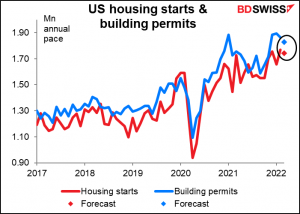 Starts are still quite high on a historical basis. 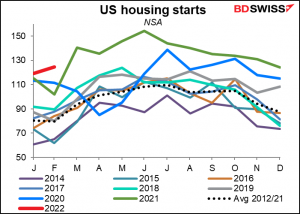 I’m not sure how relevant past performance is when evaluating the likely reaction of the housing market to higher interest rates. There’s a noticeable break in the series between before the Global Financial Crisis of 2008 (Lehman Bros. collapse) and afterward. Starts seem to require a lower mortgage rate now than they did in the past. That could have important implications for how quickly the Fed tightens. 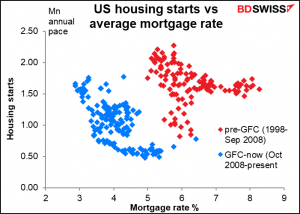 That’s pretty much it for another quiet European/US day.

Overnight, Japan releases its trade data. These have a relatively low Bloomberg relevance score but are becoming more important these days for the FX market as Japan plunges more and more into deficit. 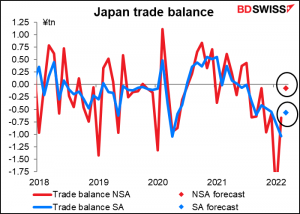 The reason for the near-disappearance of the deficit on an NSA basis is that exports are expected to rise much faster than imports. Most of the increase in exports is due to the US as exports to Europe and China appear to have fallen. Meanwhile lower imports of coronavirus vaccines should offset higher oil prices to some degree. 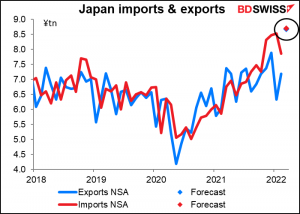 Although the Bloomberg relevance score shows that the NSA figures are the more closely watched, the market’s reaction is pretty much the same whether we look at the NSA or SA figures.

The market reaction is unusual in that the R-squared, the measure of “goodness of fit,” gets higher as time goes on. That’s a great set-up for traders who can take a position immediately after the figures come out and wait for the market to catch up with them. Importantly, the market’s reaction is in line with what one would expect, that is, a better-than-expected trade figure generally causes USD/JPY to decline (JPY to strengthen) and vice-versa. (Of course, past performance is no guarantee of future performance.) 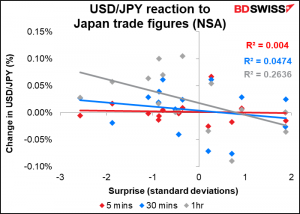 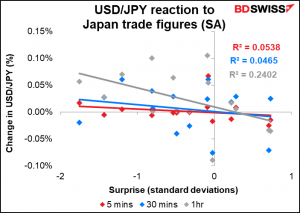 Then early Wednesday morning, Germany releases its producer prices. It’s forecast to rise at the astonishing rate of 30% yoy. Much of the increase is due to energy but still…This does not accord with the German emphasis on “sound money.” 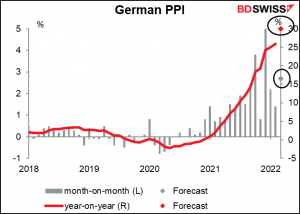 It remains to be seen how much this rise will spill over into retail prices. We haven’t seen anything like this before in the memory of most people in the market. 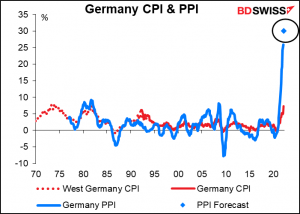 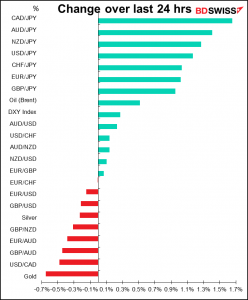